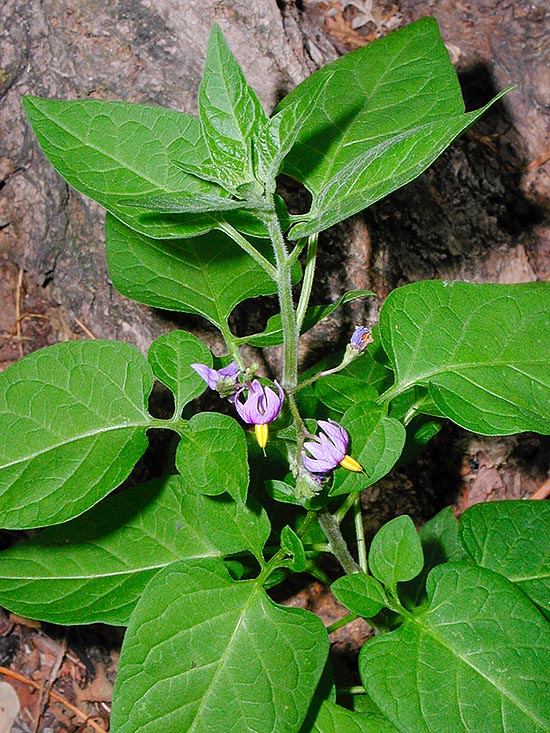 The genus Solanum includes, after various authors, 1400 to more than 1700 species of annual or perennial, bushy, shrubby arboreal (in the Tropics) and climbing species often endowed of flowers and coloured and attractive flowers; quite often they are poisonous, other times, conversely, they represent important sources of food such as the famous Potato (Solanum tuberosum), la the Eggplant (Solanum melongena), the Tomato (Lycopersicum esculentum called also Solanum lycopersicum) and the famous Pepper (Capsicum annuum), etc., or officinal, industrial and ornamental. Most of the species of this genus have diffused in South and Central America, besides Australia, South Africa, Mexico, Madagascar and Caribbean.

The name of the genus Solanum comes from the Latin “solamen, solari, solor”, meaning I confort, I console, I ease, in reference to the medicinal and sedative properties of several plants of this genus. After some authors, the term should recall the sun because many nightshades are greedy for light (heliophilous).

The name of the species dulcamara (dulcis-amara) means sweet-bitter, referring to the taste of the small branches of this plant that, placed in the mouth, have initially a bitter taste which shortly after turns sweetish.

The Bittersweet (Solanum dulcamara L. 1753), known under numerous vulgar names such as climbing nightshade, scarlet berry, etc. is a perennating, nanophanerophyte, that is a woody plant with hibernating buds placed between the 30 cm and the 2 m from the soil, having a prostrate posture or similar to that of a liana, thin stem, pithy, up to 1,5-2 (3) m, woody only in the bottom, from glossy green-grey when young to pale brown, dotted by roundish and protruding lenticels and by thin longitudinal crests, cylindrical or at times little angular, much ramose, herbaceous on top, scandent.

The radical system is very developed and fibrous. Glabrous branches or with appressed pubescence bearing leaves with spiralled disposition (seemingly alternate), with winged 2-3 cm petiole and dark green laminae, with entire margin, glossy, oval to triangular, heart-shaped or hastate at the base, of 3-6 x 5-10 cm, the upper ones composite, with a rounded or lanceolate segment on each side of the petiole.

The blooming goes from April to July (up to September at times) on umbelliform loose tops with 10-25 flowers, initially terminal, then lateral. Perfumed flowers formed by a campanulate calyx (3 mm) divided in 5 segments; rotated corolla, of 1-1,5 (<2) cm, violet (quite rarely white), 5-lobed of 6-8 (10) mm, at the base of each lacinia with two white or greenish spots (false nectaries), which have bent backwards after the fecundation (done by insects); five 5-7 mm anthers, yellow, dehiscent by two apical pores, connate around the style; capitate stigma. 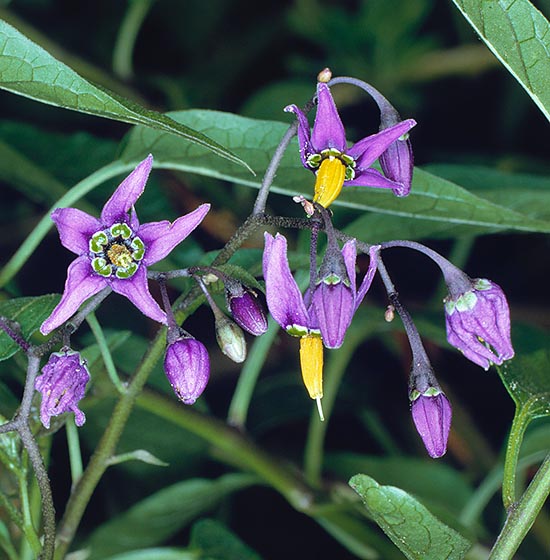 The ovary is bilocular, with chambers having many ovules and the fruits (September to November) are small ovoid 15×7,5-10 mm berries, glossy, initially green, then yellow, red-orange, up to the bright coral red when ripe; juicy and contain several tiny (1) 2 mm seeds, flat-reniform, finely reticulated, grey or yellowish-straw.

Solanum dulcamara is a plant with Palaeotemperate distribution (Euro-Asian range, from Europe to Japan, including North Africa), naturalized in North America in the Great Lakes zone.

The preferred habitat are broad leaved trees and riparian woods, the banks of the rivers and of the water streams, the reed beds, the hedges and the hygrophilous vegetation; indifferent to the substratum, loves however the rich and humid soils, also peaty, with neutral reaction, from the plain up to 1000-1200 (1500) m of altitude.

The berries, in particular, attractive for the children, may cause poisoning by ingestion (the unripe ones, green, are more toxic).

The balsamic period is the month of April, or, even better, the autumn for collecting the 2-3 years stems; they are to be cut in small pieces and to be dried up (Stipites dulcamarae F.U.I.); in such way they lose also most of the disgusting odour (of mice urine) they have when fresh. 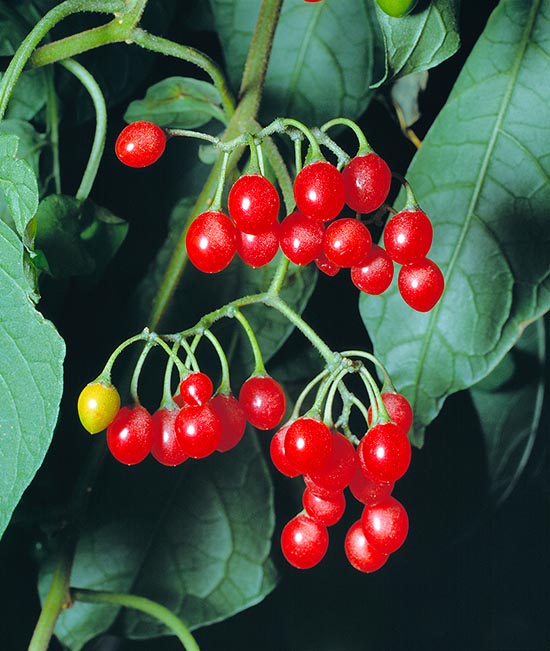 The bittersweet has diaphoretic, diuretic, anti-gout, laxative, depurative and blood thinners, slightly hypnotic, anaphrodisiac, emollient and antitussive properties; nowadays is employed mainly for the treatment of the rheumatisms, the gout and of some skin diseases (dermatosis, herpes, psoriasis, eczemas, edemata), asthma, bronchitis and in the depurative treatments. In ancient times, the juice of the fruits was used as cosmetic for eliminating unsightly spots present on the skin of the face and of the body whilst a poultice of dry leaves is suggested for the cellulitis.

The popular medicine did recommend, in case of tootache, to convey with a funnel, the steam from the boiling berries on the aching tooth and to apply the crushed berries on the ecchymosis as resolvents and rubbed on the warts and on the calluses for regressing them. Seen its toxicity, the bittersweet is a species to be excluded, at least for internal use, from the family use.

It can be easily reproduced by vegetative way immersing cuttings of stems into the water.

Solanum dulcamara was last modified: May 12th, 2020 by Giuseppe Mazza