The plant is native to western and central New Guinea, where it grows in the thick pluvial forests.

The genus is honoured to the Italian botanist Carlo Pietro Stefano Sommier (1848-1922), the name of the species is the combination of the Greek words “leukόs” = white and “phyllo” = leaf, with reference to the lower page of its whitish leaf.

The Sommieria leucophylla Becc. (1877) is a monoecious plant with solitary stem, up to about 3 m tall, with a diameter of 2-4 cm, on which are visible the rings, very close together, trace of the fallen leaves. The 20-30 leaves are thin, 1-1,8 m long and 15-30 cm broad, entire, deeply bifid, plicate, with sharp or truncated and toothed apex, rarely divided in two segments per side; of green colour on the upper side; covered by a whitish tomentum below; the petiole is 10-40 cm long and the foliar base, which wraps only partially the stem, has the edges which fray forming a mass of fibres. The inflorescences come out between the leaves, initially erect, the are up to about 1,5 m long, and formed by a main axis from which depart the floriferous branches, pendulous, with the cream or pale brown flowers disposed in the typical triad (a female flower between two male ones); the flowers have the phenomenon of the proterandry (the male organs ripe before the female ones thus avoiding the self-fecundation, helping the crossed one). 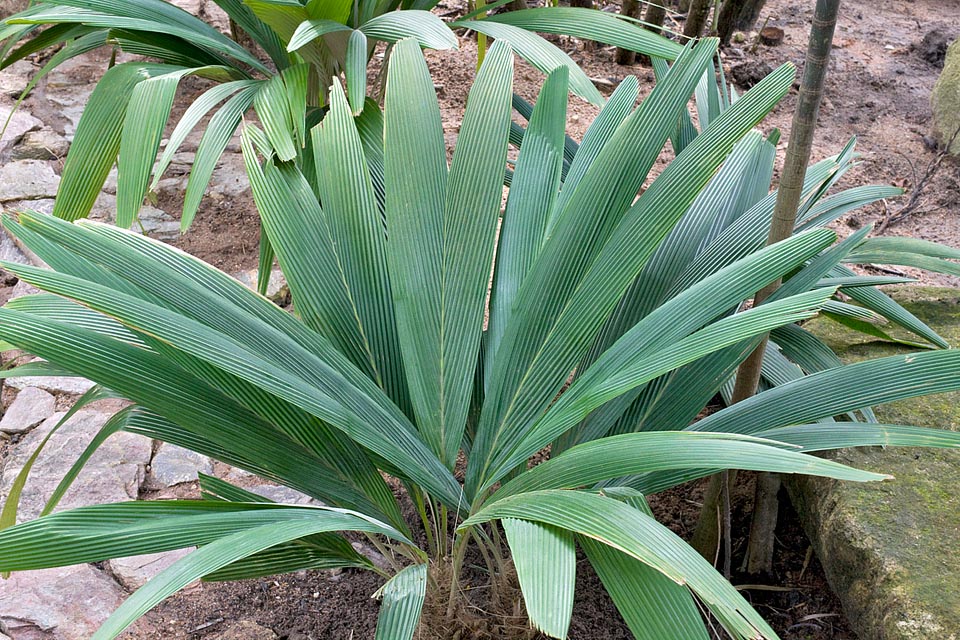 The fruits are spherical, 0,8-1,4 cm of diameter, covered by pyramidal protuberances of brown colour when completely ripe and contain one only seed. It reproduces by seed which, if fresh, germinates quickly; the growth is extremely slow. Plant with a much particular and elegant look, due to its long and thin leaves; it is still rare in cultivation, present only in some botanical gardens and in private collections of the lovers.

Its cultivation is limited to the humid tropical zones and, marginally, to the subtropical ones with minimum temperatures never under the +10 °C, to be placed in shaded location, particularly sheltered and with a high atmospheric humidity, on soils rich of organic substance, draining, and kept constantly humid. It is surely promising as pot plant for the decoration of greenhouses and shady winter gardens, utilizing substrata rich in humus with addition of coarse sand, agriperlite or other inert substance around the 30% in order to improve the drainage, with regular watering all over the year and temperatures which are good never to go down under the +16 °C.