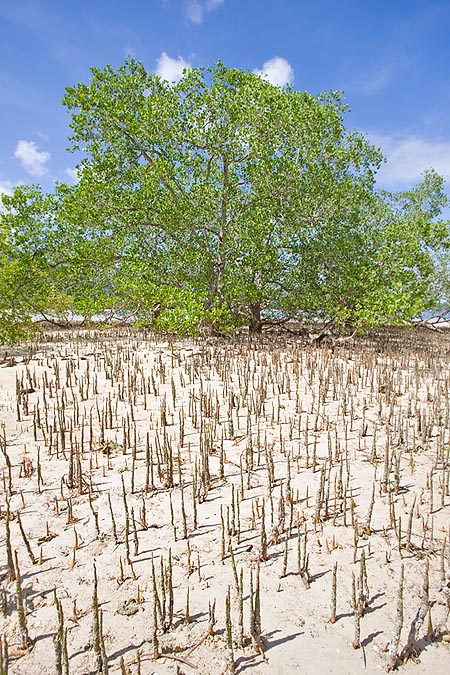 The species is native to Africa: (Kenya, Madagascar, Mozambique, Seychelles, Somalia and Tanzania), Asia (Andaman and Nicobar Islands, China in the Guangdong, India, Indonesia, Japan in the Ryukyu Islands, Malaysia, Myanmar, Papua New Guinea, Thailand and Viet Nam), Australia and Pacific Islands (Micronesia, New Caledonia, Solomon Islands and Vanuatu), where it mainly grows along the coasts and the estuaries which are daily flooded by the tides, especially in the marginal part with higher saltiness (even in 100% seawater), of the mangrove formations.

The genus is honoured to the French naturalist and explorer Pierre Sonnerat (1748-1814).

The Latin name of the species “alba” = white, refers to the colour of the petals and of the stamina.

The Sonneratia alba Sm. (1816) is and evergreen tree with expanded top, 3-15 m tall with a trunk with a diameter of 30-40 cm, brown bark, vertically and horizontally fissured, covered by a thin waxy layer.

The leaves, on a short petiole, are simple, opposite, rather thick, of pale green colour, with an elliptic to ovate or obovate shape, 5-12 cm long and 4-8 cm broad, with rounded and mucronate (terminating in a sharp point, extension of the midrib) apex.

The bisexual flowers are terminal, with a diameter of 4-6 cm, smelling of sour milk, solitary or in groups of three, rarely five, which open at the sunset and last one night only.

The fruits are globular-depressed berries, green, surrounded by the persistent sepals, of a diameter of 2-5 cm, containing a crowd, up to 200, of small white seeds, flat, falcate and floating, that fosters their dispersion. The pollination of this species is effected by nocturnal insects and bats, mainly Eonycteris spelaea and Macroglossus minimus. 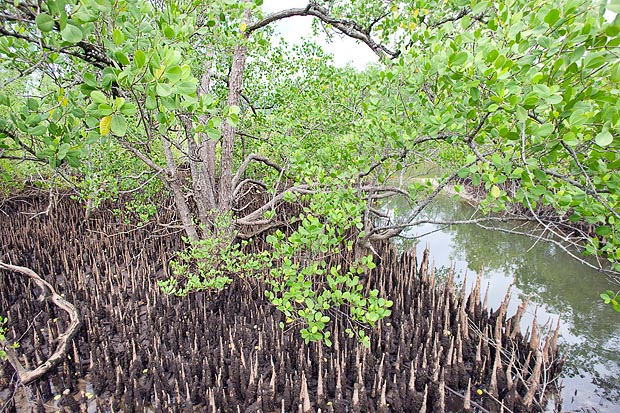 Leaves, branches and roots in low tide. The trunk may have 40 cm of diameter © Giuseppe Mazza

The tree is surrounded by a multitude of pneumatophores (roots emerging from the water or the mud equipped with a respiratory tissue – aerenchym – which allows the inflow of oxygen in the submerged organs), 25-35 cm long in medium sized plants, of conical shape with a base up to 6 cm of diameter and blunt apex, but which, in some instances may reach and exceed the metre of height.

The Sonneratia alba is the most diffused plant of the genus, of remarkable importance for the coastal ecosystem of the Indo-Pacific region, predominant in some zones, like the north-eastern coasts of Australia, where it helps to prevent the erosion and to offer shelter and food for many living species.

It is a pioneer species which prefers the high saltiness and which helps, with its thick pneumatophores, in stabilizing the muddy soil thus allowing the growth of other species.

The plant holds also a remarkable importance in the life of the local populations as the wood, due to its resistance to the rottenness and to the litophagous insects, is employed in the constructions of boats, in the realization of pilings for bridges and dwellings and for frames where, due to the presence of traces of salt in the wood, are utilized nails and screws done with material resisting to the corrosion. 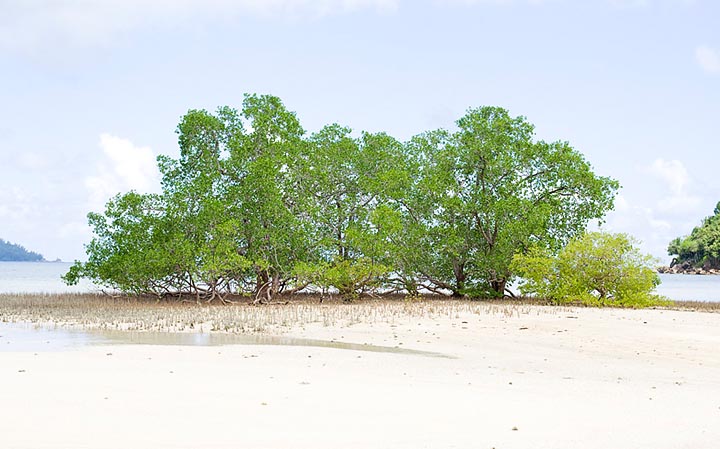 Typical formation, between sea and sky, that may be 5 m tall. Feeding and medicinal uses © Giuseppe Mazza

The wood is also utilized as combustible, even if of poor quality. The pneumatophoric roots are used as buoyant balloons for the fishing nets. The leaves are edible. They are locally consumed raw or cooked or utilized as feed for livestock.  Parts of the plant are utilized in the traditional medicine; laboratory studies have confirmed the presence in the extract of the leaves of a polysaccharide with antidiabetic properties.

Little cultivated outside its natural environment as it is difficult to recreate the necessary conditions for its survival, it does not tolerate the freshwater, which, with the time, causes its death. Only a few specimens are present in the botanical gardens.

→ To appreciate the biodiversity within LYTHRACEAE family please click here.