South African Iridacea have insolent beauty. Flowers with unusual look of the Iris kind. How to cultivate them in our climates. The flowers of number 3. In fact they have 3 petals, 3 sepals , 3 stigmas, 3 stamen, 3 ovary lodges. Botanic approach to Iridacea which count about 40.000 varieties, with flowers of all colours, even green. 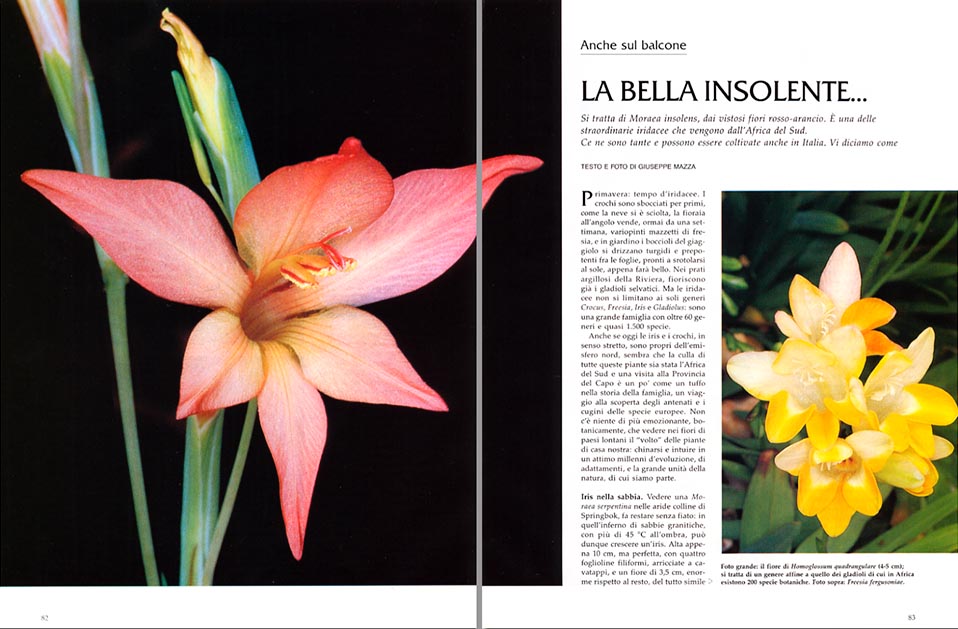 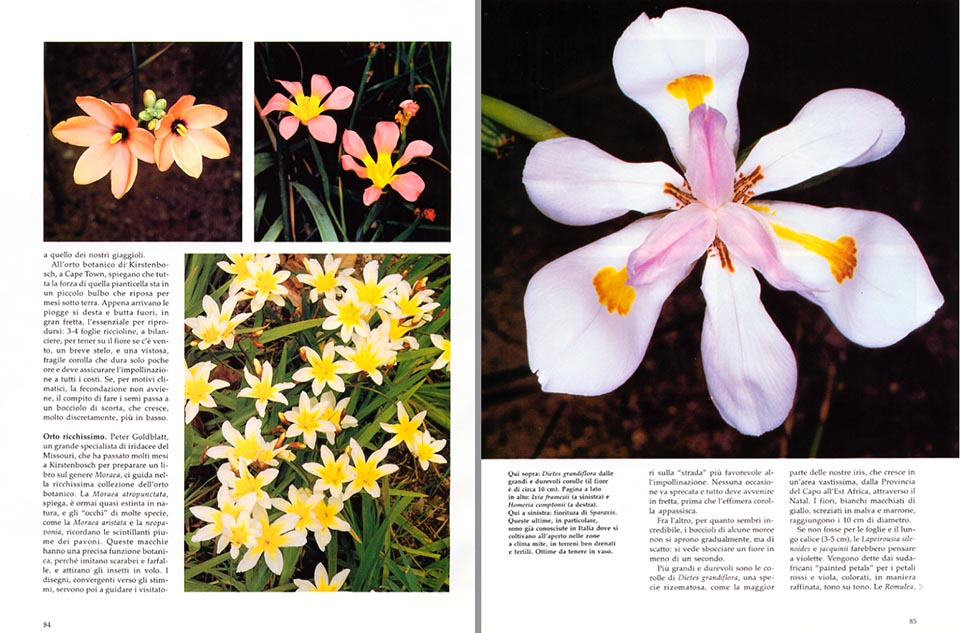 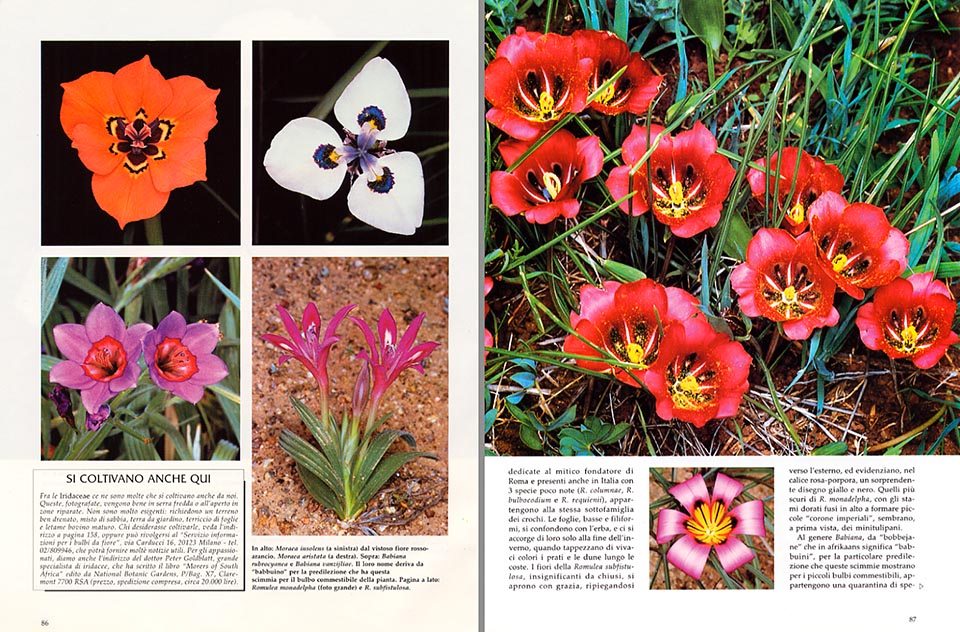 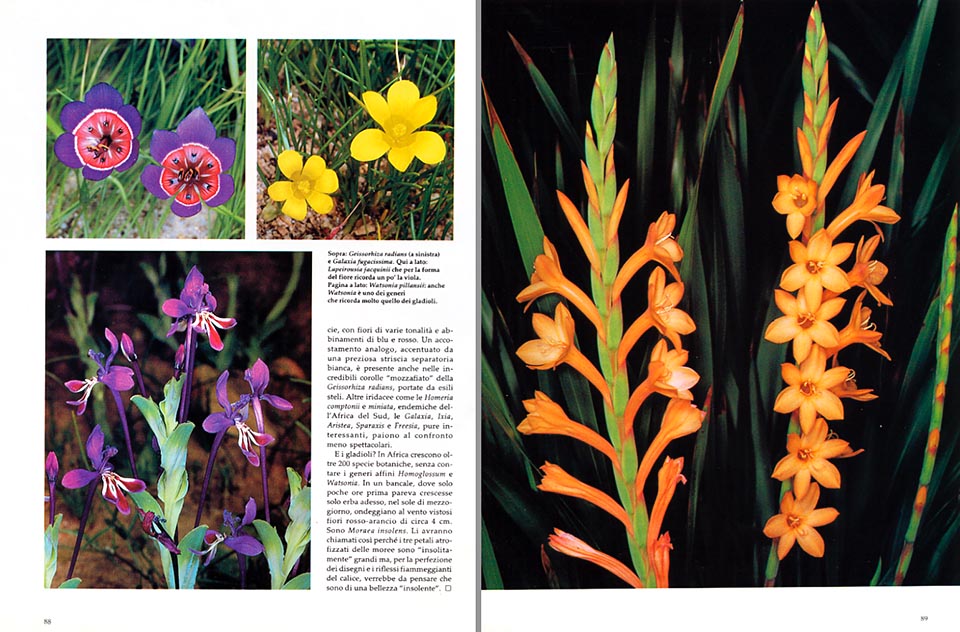 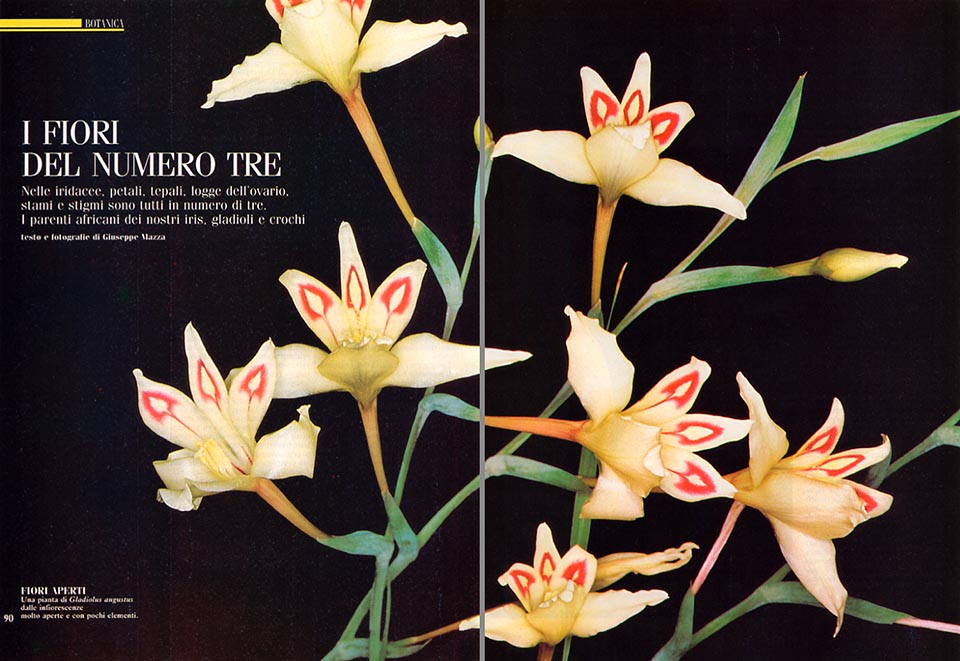 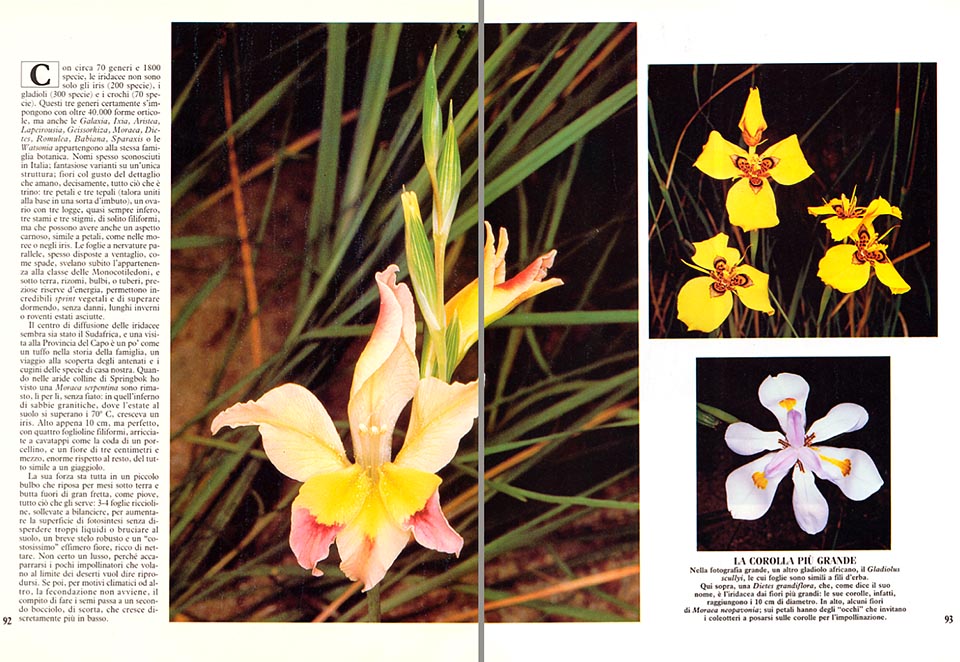 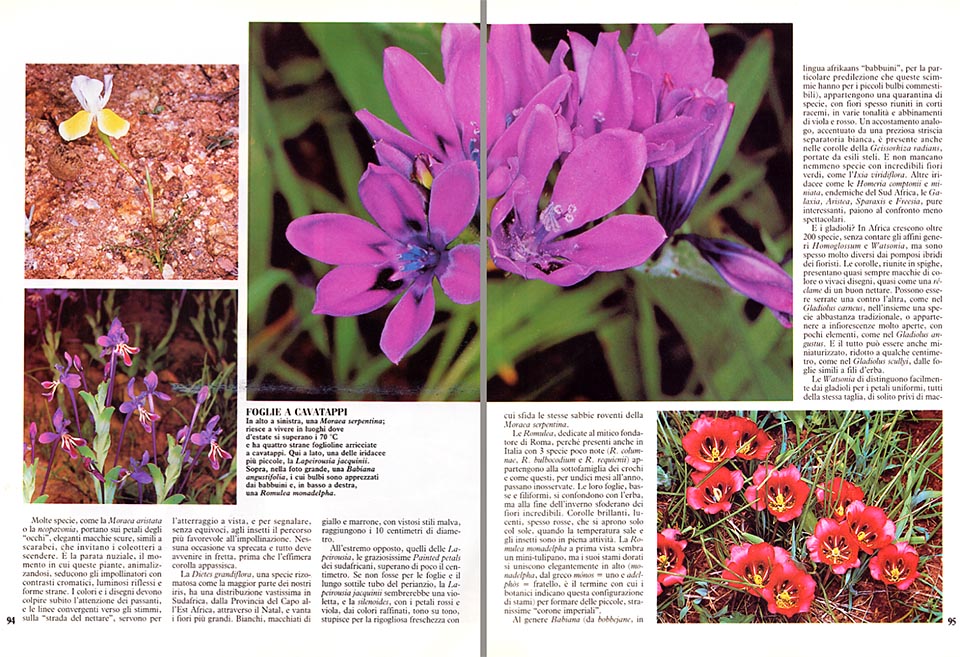 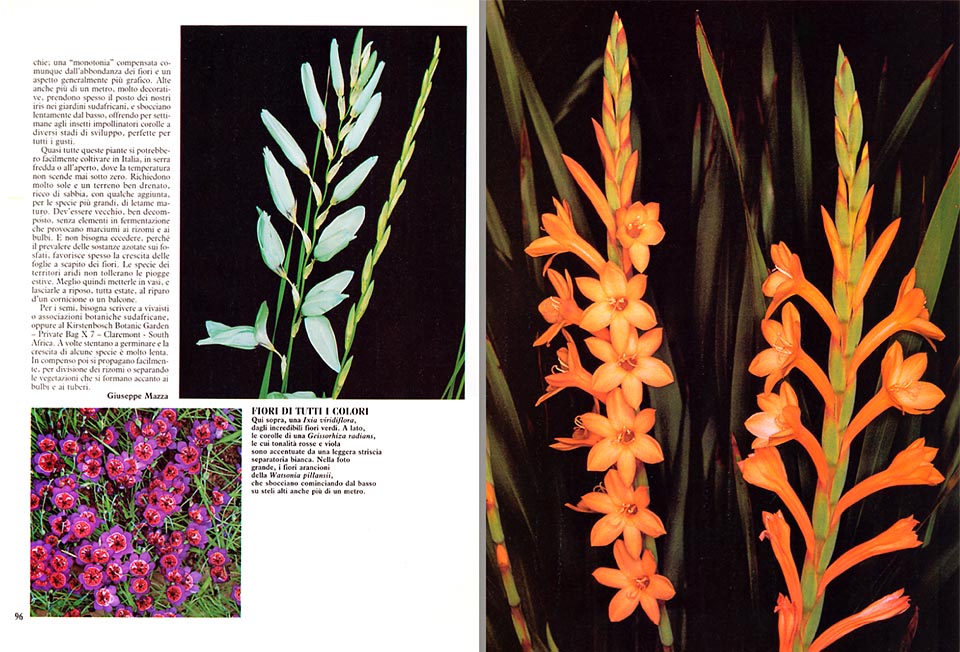 With about 70 genera and 1.800 species, the iridaceae are not only the irises (200 species), the gladioli (300 species), and the crocuses (70 species). These three genera impose themselves with more than 40.000 horticultural forms, but also the Galaxia, Ixia, Aristea, Lapeirousia, Geissorhiza, Moraea, Dietes, Romulea, Babiana, Sparaxis, or the Watsonia do belong to the same botanical family.

Names often unknown in Italy; fanciful variations on a unique structure; flowers with the taste of the detail, which love, definitely, all what is trine: three petals and three tepals, sometimes united at the base in a sort of a funnel, an ovary with three lodges, almost always on the under side, three stamens and three stigmata, usually filiform, but which can have also a pulpy appearance, resembling to petals like in the moreaes or in the irises.

The leaves, with parallel nervations, often disposed like a fan, similar to swords, show at once that they belong to the class of the Monocotyledones and, under the ground, rhizomes, bulbs or tubers, precious reserves of water, allow incredible vegetative sprints and to overcome, sleeping, without damages, long winters or fiery dry summers.

The centre of diffusion of the iridaceae seems having been the South Africa, and a visit to the Cape Province, is something like diving in the history of the family, a trip at the discovery of the ancestors and cousins of the species of our country.

When, in the arid hills of Springbok, I have seen a Moraea serpentina, I was, on the spot, so much astounded: in that hell of granitic sands, where temperatures on the ground, in summer, are more than 70 °C, there was an iris growing up.

Tall only 10 cm, but perfect, with four small filiform leaves, curled like a corkscrew, similar to the tails of the three little pigs, and a 3 cm and a half flower, enormous if compared to the rest, very similar to a flower-de-luce.

Its strength stands, all, in a small bulb which rests, for months, under the ground and throws out, in a hurry, as soon as it rains, all what it needs: 3-4 curled leaves, raised like a balance, in order to increase the surface of photosynthesis without dispersing too many liquids or burn on the soil, a short, robust stem, and a “very expensive” ephemeral flower, rich of nectar.

By sure, it is not an extravagance, because gaining the few pollinators which fly close to the borders of the deserts, means reproduction.

If then, for climatic reasons or other, the fecundation does not happen, the charge of making the seeds goes to a second, spare, bud, which discreetly grows below.

Moderation, prudence, and Franciscan beauty: the Moraea serpentina has understood all what counts in the life, and has taken it.

Many species, such as the Moraea aristata or the neopavonia, carry some “eyes” on the petals, elegant dark dots, resembling to dung beetles, which invite the coleoptera to come down.

It’s the nuptial parade, the moment when these plants, animalizing, seduce the pollinators with chromatic contrasts, bright reflexes and strange forms. The colours and the drawings, must attract at once the attention of the passers-by, and the converging lined towards the stigmata, on the “way of nectar”, serve for the landing at sight, and for signalling to the insects, without misunderstandings, the most favourable route for the pollination. No chance is wasted, and all must happen quickly, before the ephemeral corolla withers.

The Dietes grandiflora, a rhizomatous species like most of our irises, has a very wide distribution, from the Cape Province to East Africa, through Natal, and has the biggest flowers. White, spotted of yellow and brown, with showy mauve styles, they reach the 10 cm of diameter.

To the opposite extreme, the flowers of the Lapeirousia, the very charming “Painetd petals”, of the South Africans, just exceed the centimetre. But the leaves and the long, thin, tube of the perianth, the Laiperousia jacquinii would look like a sweet violet, and the Lapeirousia silenoides, with the red petals and violet, with refined colours, tone over tone, astonishes for the exuberant freshness with which is defying the same fiery sands as the Moraea serpentina.

The Romulea, dedicated to the mythical founder of Rome, because present also in Italy with 3 little known species (Romulea columnae, Romulea bulbocodium e Romulea requienii), belong to the sub-family of the crocuses, and like these ones, get unobserved for eleven months a year.

Their leaves, low and filiform, get confused with the grass, but by the end of winter, they draw out incredible flowers. Brilliant corollas, shining, often red, which open only with the sun, when temperature rises, and the insects are in full activity.

The Romulea monadelpha, at first sight looks like a mini-tulip, but its golden stamens unite elegantly upwards (monadelphous, from the Greek monos = one, and adelfos = brother, this is the term with which botanists indicate this configuration of stamens), to form very strange, small, “imperial crowns”.

To the genus Babiana, from “Bobbejane”, in Afrikaans “Baboons”, for the particular predilection these monkeys have for the small, edible, bulbs, belong some forty species, with flowers often united in short racemes, in various tones, and couplings of violet and red.

An analogous matching, stressed by a precious white separating stripe, is present also in the “breath taking” corollas of the Geissorhiza radians, carried by slim stems.

And there are also species with incredible green flowers, like the Ixia viridiflora.

Other iridaceae like the Homeria comptonii and miniata, endemic of South Africa, the Galaxia, Aristea, Sparaxis and Freesia, also interesting, look at the comparison less spectacular.

And the gladioli? In Africa do grow up more than 200 species of them not counting the alike genera Homoglossum and Watsonia, but are often very different from the pompous hybrids of the florists.

The corollas, united in spikes, present almost always dots of colour or lively drawings, advertising a good nectar. They can be pressed one against the other, like in the Gladiolus carneus, in the whole, a rather traditional species, or belong to very open inflorescences, with few elements, such as the Gladiolus angustus.

And the whole can be also reduced to a small scale, a few centimetres, like in the Gladiolus scullyi, with the leaves resembling to blades of grass.

The Watsonia distinguish easily from the gladioli for the uniform petals, all of the same size, usually spotless; a “monotony” compensated by the copiousness of the flowers and, generally, a more graphic look. Tall even more of one metre, very ornamental, they often replace our irises in the South African gardens, and blossom slowly from the bottom upwards, offering for weeks to the pollinators, corollas at various stages of development, perfect for all tastes.

Almost all these plants might be easily cultivated in Italy, in a cold greenhouse, or in open air, where the temperature never goes below zero.

They require much sun and a well drained soil, rich of sand, with some addition, for the largest species, of ripe manure. This must be old, well decomposed, without elements of fermentation which can cause rottenness to rhizomes and bulbs.

And we must not exceed, because the predominance of the nitrogenous substances on the phosphates, often encourages the growth of the leaves to the detriment of the flowers.

The species of arid lands do not tolerate the summer rains.

Better, then, to place them in pots, and leave them to rest, for the whole summer, sheltered by an eave or a balcony.

For the seeds, you have to write to South African nurserymen or botanical associations. Sometimes they are hardly able to germinate and the growth of some species is very slow. In return, then, they propagate easily, by division of the rhizomes or separating the vegetations which form close to the bulbs and the tubers.

→ To appreciate the biodiversity within the IRIDACEAE family please click here.

South African Iridaceae : spectacular relatives of the iris was last modified: May 22nd, 2019 by Giuseppe Mazza