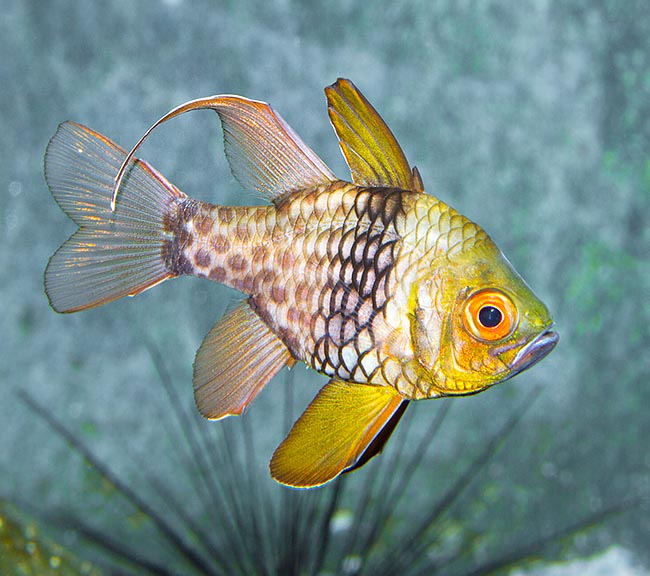 Common also in domestic aquariums, the Pajama cardinalfish (Sphaeramia nematoptera Bleeker, 1856) belongs to the class of Actinopterygii, the ray-finned fishes, to the order of Perciformes and to the family of Apogonidae, counting 22 genera and more than 200 species mainly present in the tropical seas, with few exceptions like Apogon imberbis, at home in the Mediterranean, or the members to the genus which are freshwater fishes.

The etymology of the genus “sphaeramia” comes from the Greek “sfaira” = sphere, due to the roundish look of the animal and from “amia” the term used by the old Greeks for indicating a shark, due to the great first dorsal fin, which recalls these sea raiders.

The name of the genus may also come from the old genus Amia, erroneously used until the middle of the 20th century for the “cardinalfishes”. It would be then a “round Amia “.

The name of the species “nematoptera” comes always from the Greek “nema, -atos” = thread and “pteron” = wing, fin, with reference to the second dorsal fin which in the adults has a long filament.

It lives in the tropical waters of the Western Pacific; approximately from Indonesia, New Guinea and the Australian Great Barrier Reef up to New Caledonia, the Fiji Islands and Tonga. Northwards, it has colonized the Micronesia, the Philippines and the southern part of Japan.

It is an animal for still waters, rich of ramified madrepores, such as those of the genus Acropora, with a bias for the Porites nigrescens and the Porites cylindrica, where it spends, hidden, great part of the day. It rarely descends more than 15 m and the juveniles usually grow up among the roots of the mangroves. 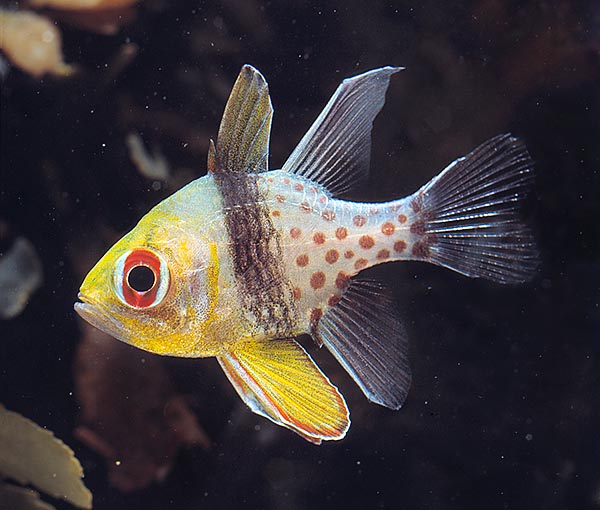 It is a truly unique fish. The flat, oval, body may reach the 9 cm, including the great caudal fin, but in the whole the look is roundish, as suggests the name of the genus.

Also the fore part of the body is golden, with an enormous eye, for a good night vision, and the iris is red-orange with two clear bands. At the height of the first dorsal fin the sides are crossed by a dark zone, the “pajamas belt” which follows, white dotted, as they used time ago.

The mouth is huge in comparison with the body. It opens downwards for swallowing copepods, small worms and small benthic crustaceans.

During the day the pajama cardinalfish lives hidden among the madrepores in small schools and gets out only by the sunset looking for food.

At the time of the reproduction, pairs take form. The fecundation is external, but then the male collects the mass of eggs and keeps them in its mouth for about ten days, without eating, till the hatching. At their birth, the larvae measure only 3 mm and in aquarium, where the Sphaeramia nematoptera has reproduced several times, this small species may live even 8 years.

Thanks to the paternal cares, the populations are able to double their members in less than 15 months and the vulnerability index is consequently very low: just 10 on a scale of 100.