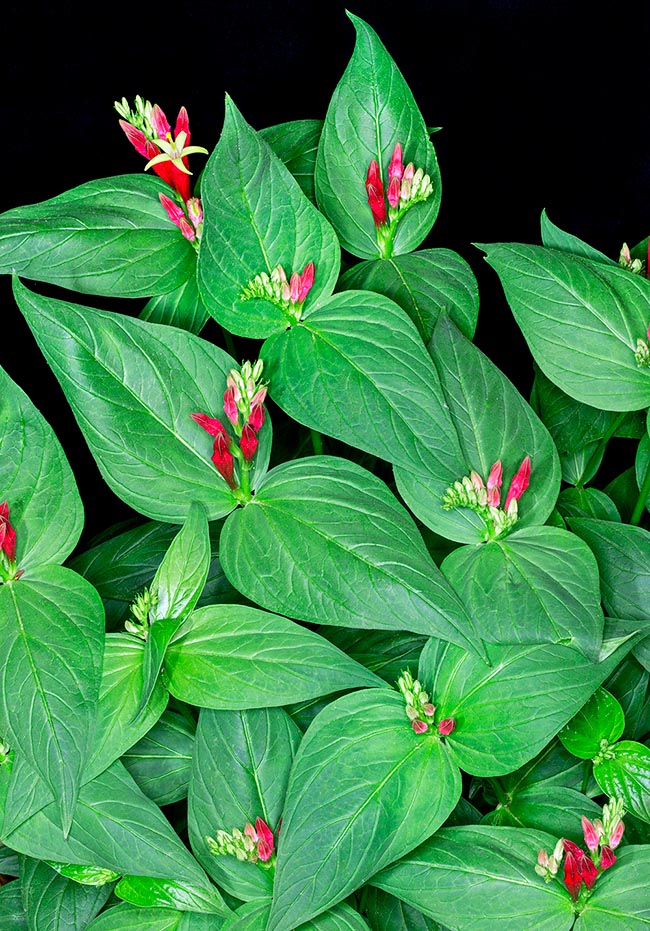 Native to USA, the Spigelia marilandica is a perennial herbaceous rhizomatous species, deciduous, 30-60 cm tall that in the time forms dense tufts. The fruits are capsules that when ripe send the seeds far from the mother plant © Giuseppe Mazza

The species is native to USA (Alabama, Arkansas, Florida, Georgia, Illinois, Indiana, Kentucky, Louisiana, Maryland, Mississippi, Missouri, North Carolina, Ohio, Oklahoma, South Carolina, Tennessee and Texas) where it grows in the humid forests and at the margins of swamps and water streams, from the sea level up to about 350 m of altitude.

The genus is dedicated to the Flemish physician and botanist Adrian van den Spiegel (Latinized Adrianus Spigelius) (1578-1625) who was professor of anatomy and surgery in Padova; the specific Latin name refers to one of its sites of origin, the Maryland.

Opposite leaves, sessile or sub-sessile, simple, ovate to ovate-lanceolate with acuminate apex and entire margin, 6-12 cm long and 3-6 cm broad, of intense green colour, glabrous and shiny above, sparsely pubescent, in particular along the veins, below.

The inflorescences, on an about 5 cm long peduncle, are spiciform terminal racemes, unilateral and curved, 3-10 cm long, with erect flowers of bright red colour outside, pale yellow or greenish yellow internally.

The fruits are bilocular dehiscent capsules, about 0,5 cm long and 0,8 cm broad, containing few seeds of blackish colour, angled for mutual compression, that are sent when ripe far from the mother plant. The flowers are pollinated by the hummingbirds, in particular by the Ruby-throated hummingbird (Archilochus colubris L., 1758).

It propagates by seed, placed in position directly as soon as collected in early summer, by apical cutting, before the blooming, and easily by division.

Species of big ornamental effect when blooming due to the bright and contrasting colours of the flowers produced abundantly for about one month between late spring and early summer and sporadically in the rest of the season. 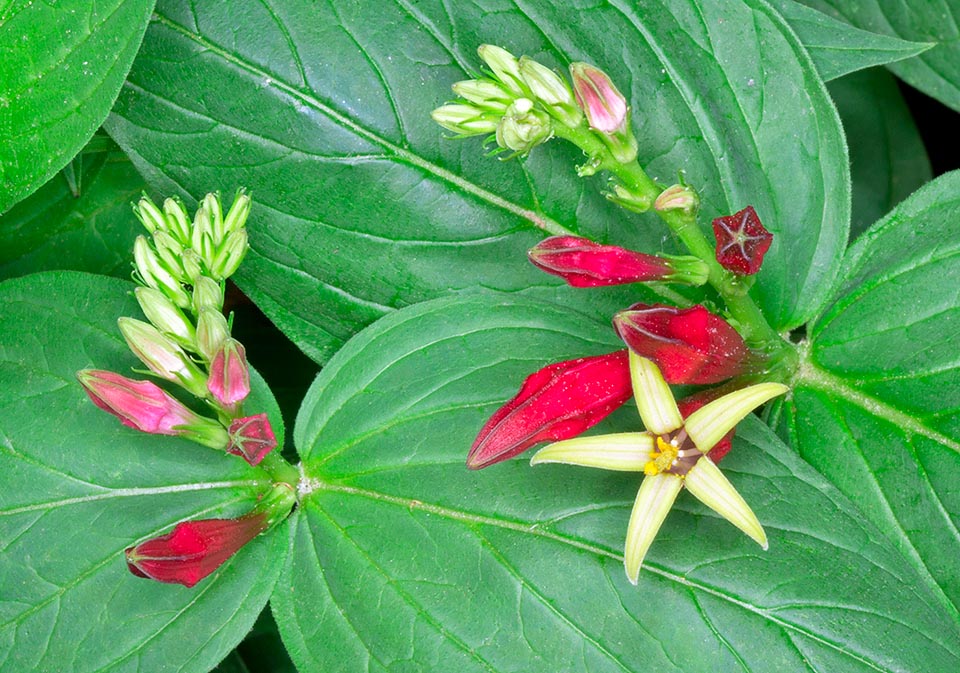 Of easy cultivation, is utilizable for flower beds, borders and as soil cover in various situations of exposition, from filtered sun light to full shade, and of climate, from the continental to the subtropical ones, bearing the high summer temperatures as well as the rigid winter ones typical to the central-eastern states of USA. It grows in an ample variety of soils, even if it prefers the draining ones rich of organic substance, acidic or neutral, maintained almost constantly humid, but well rooted it may overcome short dry periods.

All parts of the plant are toxic due to the presence of oxalate of calcium and of other different substances, among which the spigeline, an alkaloid with an effect similar to that of the strychnine. In the past the roots were utilized by the natives to treat the intestinal parasitoses, practice no longer in use due to the high level of danger in case of overdose and prolonged use, that may cause serious problems and in the most serious cases, the death; in the official pharmacopoeia a very effective vermifuge is obtained from various parts of the plant.

→ To appreciate the biodiversity within the LOGANIACEAE family and find other species, please click here.