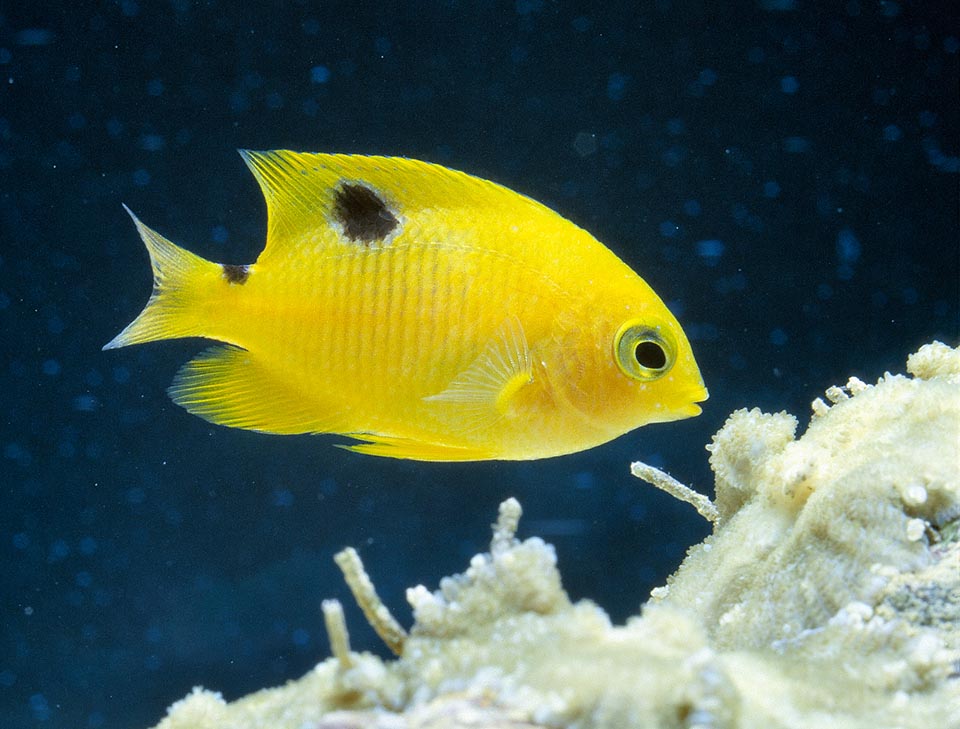 The Stegastes planifrons (Cuvier, 1830) belongs to the class of the Actinopterygii, the ray-finned fishes, to the order of the Perciformes and to the family of the Pomacentridae that counts 29 genera and more than 400 species, among which are the damselfishes and the well-known clownfish.

The Stegastes planifrons is substantially a Caribbean fish present in the tropical waters of western Atlantic. Indicatively, we find it, following the coastline, in Florida, Mexico, Belize, Honduras and Panama up to Venezuela. It gets its northern limit at the Bermuda Islands. Then, going south, it has colonized the Bahamas, Cuba, Turks and Caicos Islands, Cayman Islands, Jamaica, Haiti, Dominican Republic, Puerto Rico, Virgin Islands, Antigua and Barbuda, Montserrat, Guadeloupe, Dominica, Martinique, St. Lucia, Barbados, St. Vincent and the Grenadines, Grenada, Trinidad and Tobago, Curacao and Aruba. 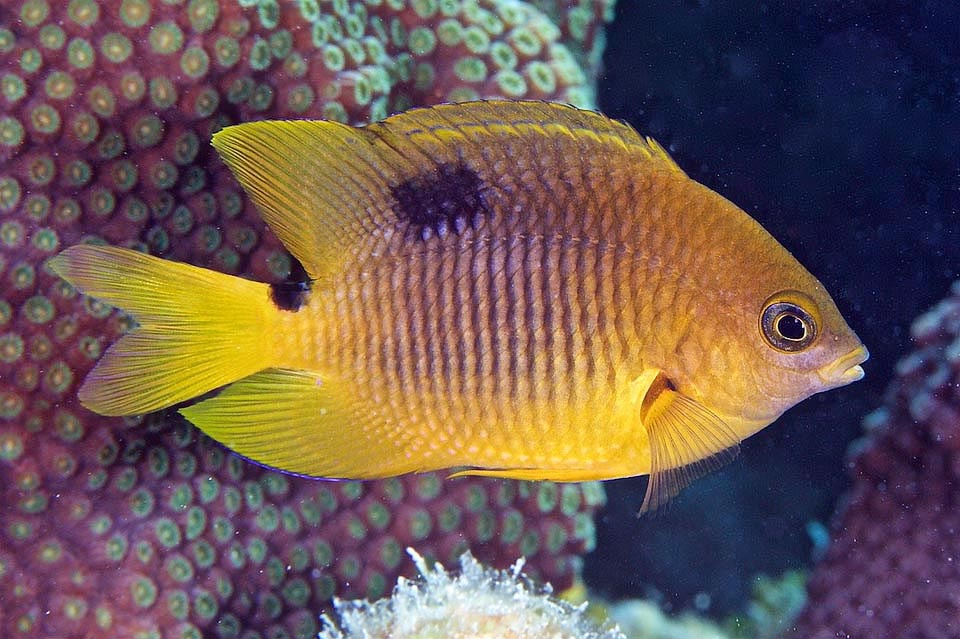 Growing, colour gets darker. When young they are also cleaner fishes freeing the bigger species of the parasites but later the diet is based on algae © Allison & Carlos Estape

It lives in shallow waters, never under 30 m of depth, between madrepores and coastal rocks, rich of algae. It swims in the calm waters of the lagoons but also on the outer side of the reefs and in the madreporic formations grown offshore.

Once the Stegastes planifrons took shelter during the day in the sharp ramifications of the Acropora cervicornis and spent the night in small grottoes, but nowadays the situation is changing.

The population of this species has consistently increased in the Caribbean, especially after the hurricane Allen of 1980 which has destroyed most of their usual madrepores, hit, moreover, recently by the white-band disease. The Stegastes planifrons should have given them the coup de grace cultivating on the broken branches, with great success, the algae of which they nourish and colonizing, for sleeping in the crevices of other species.

Then there is he who sustains that the increase is linked to the uncontrolled fishing that has sent away the big predators like the groupers, but it does not seem that these small fishes stood among their preys. Usually, the Stegastes planifrons are hunted by smaller fishes and getting rid of the big predators their enemies should have, on the contrary, increased and reduced their number. The excessive fishing therefore should not be the cause of their sudden increase, even if in Puerto Rico, data in hand, they sustain the contrary. 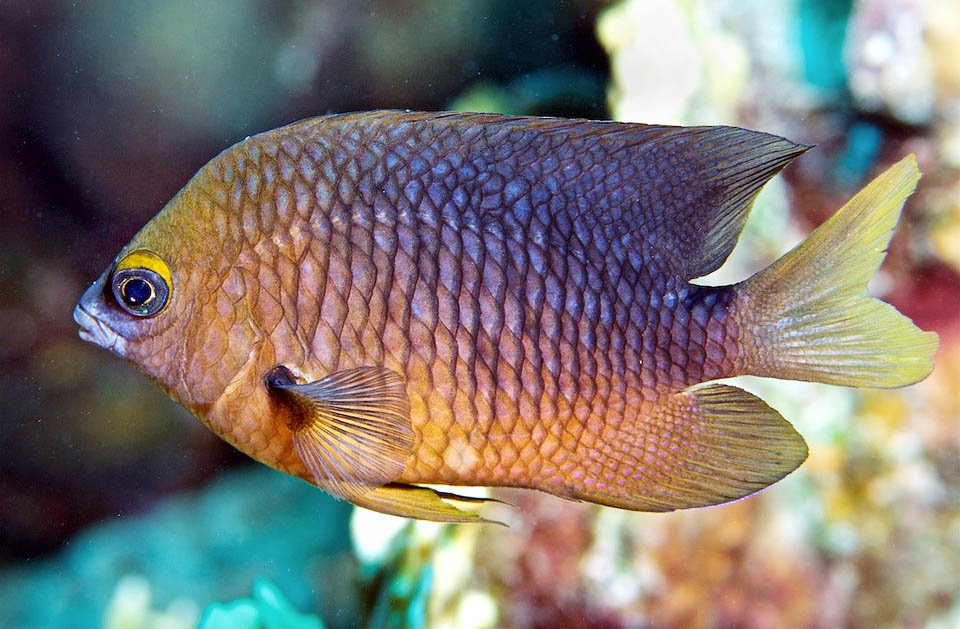 The fact is that due to the death of their choice madrepores, the Stegastes planifrons are now covering with algae also the not ramified madrepores such as the Montastraea annularis, the Monastraea faveolata, or the Gardineroseris planulata, that have a much slower growth than the Acropora cervicornis and not regenerating, die little by little degrading the reef.

There is a major chromatic difference between the juvenile livery and the adult one. The young, at times hosted by the domestic aquaria, have a nice bright yellow colour. They have a big black spot between the back and the dorsal fin, at the point of separation between the spiny and the soft rays, and another spot, smaller, over the caudal peduncle. Both are slightly edged blue and the body is crossed by thin dark vertical lines, more or less intense depending on the mimetic needs and the mood of the fish.

Conversely, the adults display a modest grey-brownish livery, so much that at times it is difficult to see the two spots, but have a third black spot, characteristic, at the base of the pectoral fin, always visible because of the contrast with the paler ventral zone. 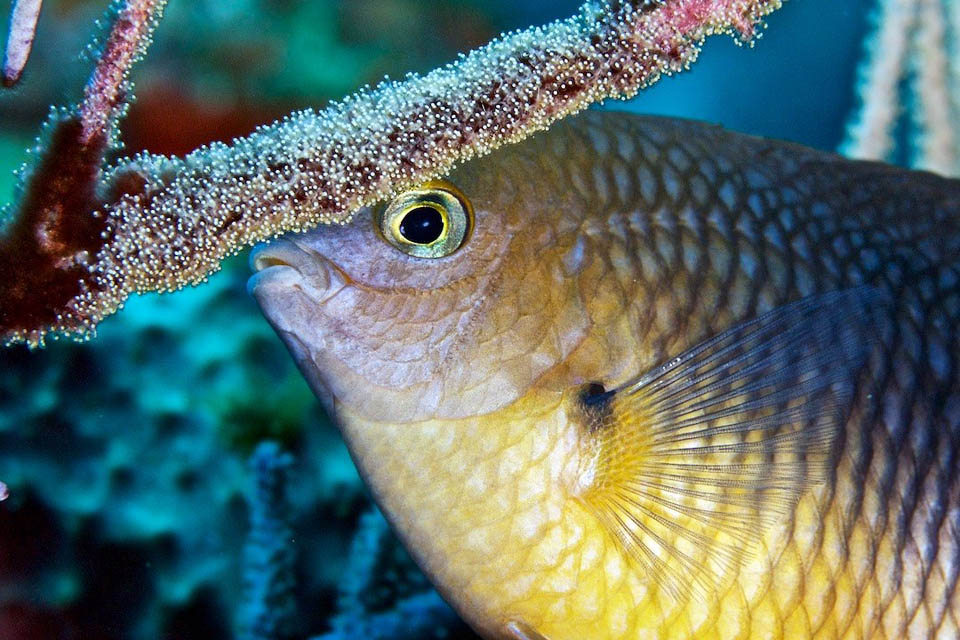 The females lay, glued to the bottom, many eggs, protected and aerated till the hatch by the male © Allison & Carlos Estape

The Stegastes planifrons is a territorial fish, ready to drive away violently the herbivorous fishes that enter its small orchard of benthic algae. It cultivates them and pecks at them the whole day without ignoring, while passing, small worms, copepods, small gastropods, eggs, hydroids and sponges. The juveniles behave also as “cleaner fishes” freeing the big fishes of the ectoprasites. The females glue the eggs on the substratum and after the fecundation the males keep watch until the hatching, aerating them with the fins to avoid the formation of molds.

The populations decimated by the events my double their membres in less than 15 months and the vulnerability index is nowadays (2020) obviously low, marking just 24 on a scale of 100.