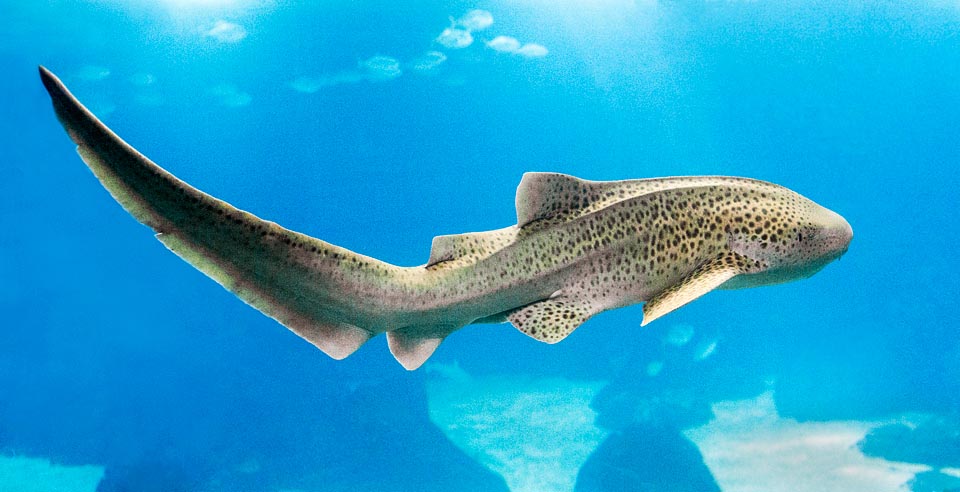 Stegastoma fasciatum is a shark of tropical and subtropical waters present from the African coasts up to the extreme lands of Oceania. It can reach the three metres and a half with an imposing tail almost as long as the body, crossed in the adult by five ridges that give the body a typical sharp look © Giuseppe Mazza

The name of the genus comes from the Greek words “stego” (cover) and “stoma” (mouth) perhaps to better illustrate the seizing system utilized in the hunt: the cover with the mouth of the prey, leaning against the bottom, with consequent suction of the same. The name of the species, fasciatum, indicates the stripes that the youngs of the species have and that will transform in cheetah spots when adults. These stripes originate also the Italian name of squalo zebra (that some call also leopard shark). 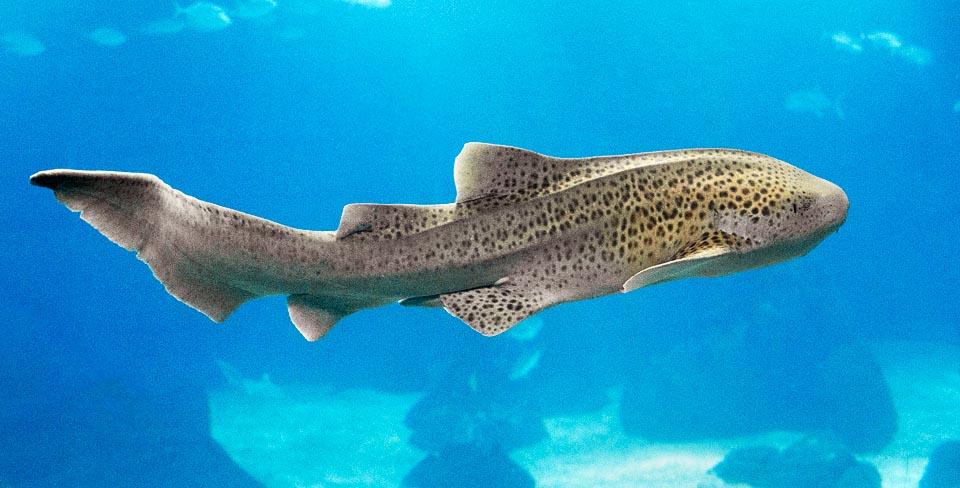 Mainly active the night, it gets out for hunt by evening with its vigourous swim, made by undulations of the body, that the imposing tail enhances exponentially. It eats fishes and invertebrates, sucked thanks to the pharyngeal extension that, widening, works as suction pump, while the mouth rapidly closes with no way out © G. Mazza

It is a shark of tropical and subtropical waters, present from the western coasts of India up to the extreme lands of Oceania, of which, however, avoids the coldest zones such as the waters of southern part of Australia. It is also present in Madagascar and on the African coast from Somalia to Mozambique. Sporadic reports also in the Red Sea and Persian Gulf where however the fish has almost completely disappeared.

The Stegostoma fasciatum lives in strict contact with the bottom, from just under the surface up to about 90 m where it can be found resting on sandy or detrital bottoms especially in the current zones where it stays with the mouth open turned towards the flow of water. This position allows it to breathe better though remaining perfectly motionless. At that moment the animal moves with a vigorous swimming made of undulations of the body, that the long tail enhances exponentially. 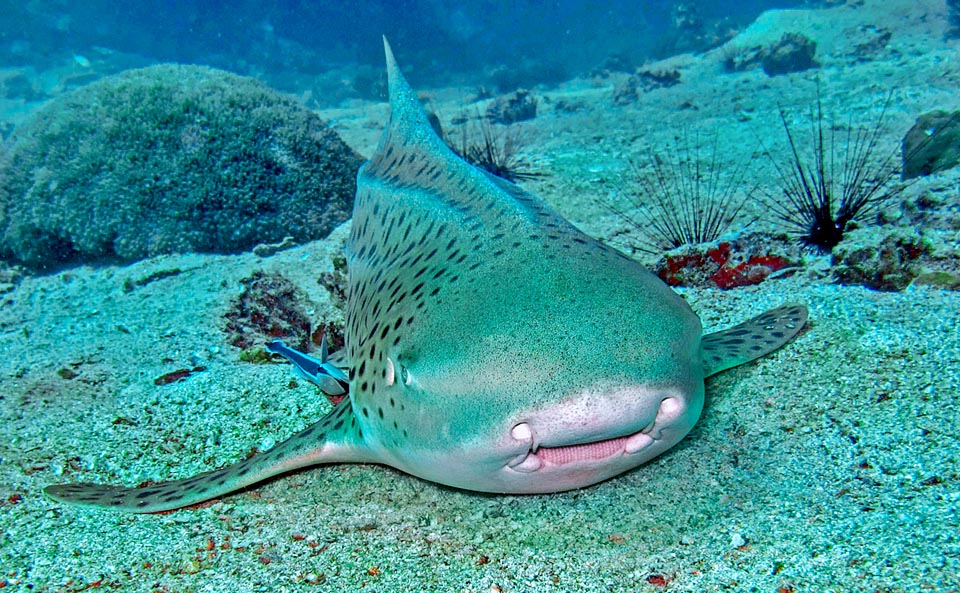 The day is spent lying on the bottom, in current zones, with open mouth towards the flow of water to breathe better. The small teeth resemble a grater © S. Guido

The maximum recorded length is of 3,54 m, but the average size of those we can meet is of 2,5 m. The main characteristics, when we meet it under water, are the body almost ovoidal elongated ahead, that at the height of the pelvic fins begins to narrow to end gradually in the tail, a robust trunk without solution of continuity with the body, bordered with ample lower margin and a more narrow “mane” above. The big trunk, in the adult specimens, is characterized by five ridges (two per side plus one central) that cross it, giving a sharp look.

The body of the youngs is crossed by white and dark vertical ridges, arranged irregularly in the first thoracic segment. Becoming adult, gradually the ridges transform in spots and grant a look more similar to cheetah than a zebra. The belly is white. Immediately under the slits of the gills depart two very ample pectoral fins, with the same marked drawings of the body on the upper part. 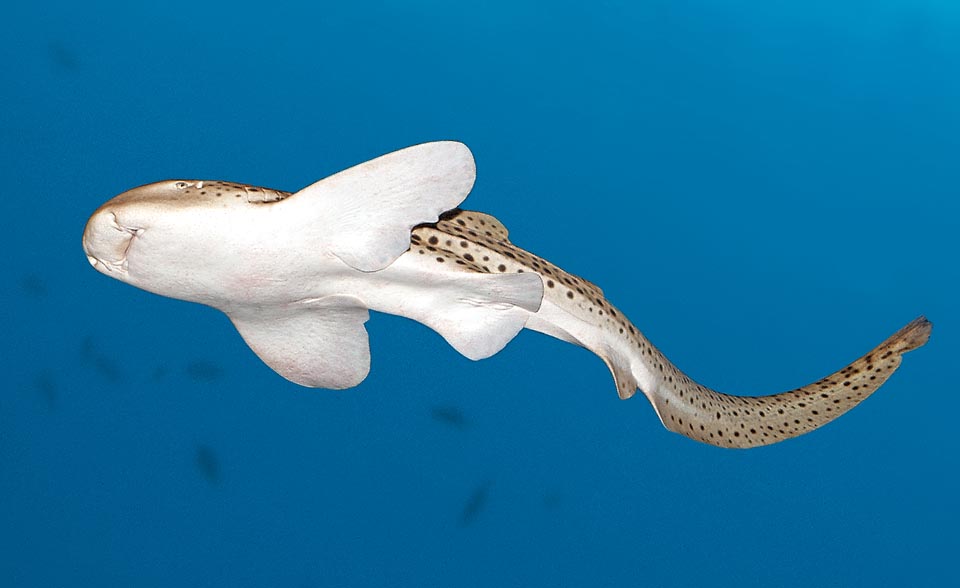 Abdomen and lower parts of the fins are white, whilst the upper part, more or less of fawn colour has a drawing changing with age © Giuseppe Mazza

The small eye, concolourous to the body and with vertical iris, is poorly visible, and is followed at short distance by a little bigger spiracle. The mouth is small and rich of tiny teeth that at first sight may lead to think to a grater. It is connected with two skin grooves at the nostrils from where hang two tiny barbells.

This is the pattern of a subadult with roundish spots not yet broken on the sides in the characteristic leopard spots drawing, shading towards the tail © Giuseppe Mazza

It can be considered harmless even if, if provoked and unable to flee, could react causing bruised wounds. Therefore, it can be approached without fears having the care, common to any approach, of avoiding sudden movements and keep always an eye on any small change in the posture of the fish, that might announce an attack.

Like the tawny nurse shark Nebrius ferrugineus, with whom it shares many characteristics it nourishes of fishes and of any kind of invertebrates, that it hunts mainly during the night hours sucking them up from the bottom thanks to the great pharyngeal extension, that expanding operates as suction pump. 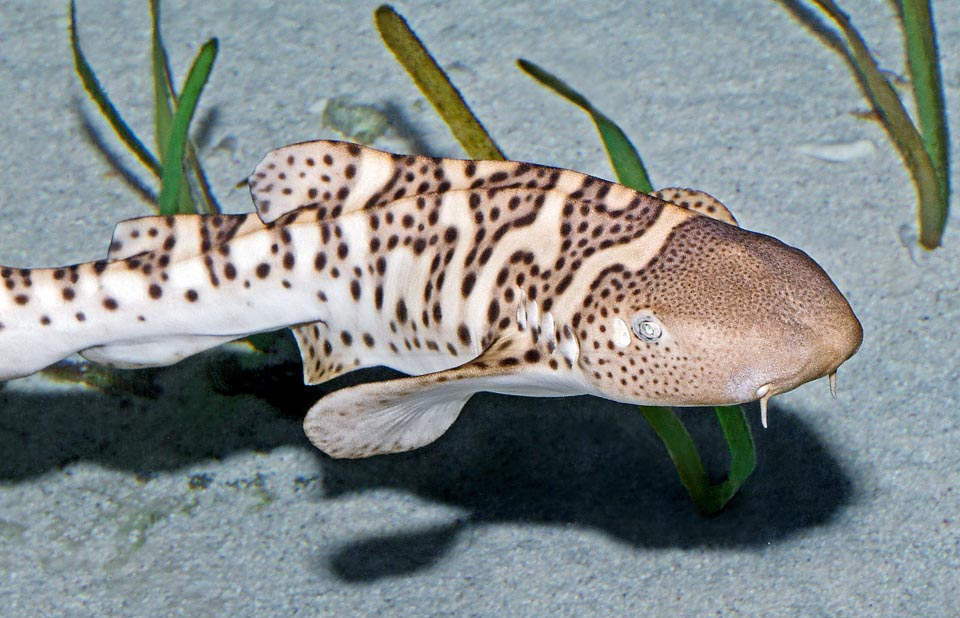 The youngs, about thirty centimetres long when getting out from the laid eggs, have instead a surprisingly different mimetic design © Giuseppe Mazza

The fish is oviparous and after the copulation, during which the male holds the female biting a pectoral, she lays the eggs in small isolated groups. The look of these ones is of big involucres, of dark brown or reddish colour, that anchor to the substratum by means of thin filaments. The deposition may reach or just exceed the forty eggs, that after a period of 2/4 weeks (in captivity), will hatch giving birth to the small newborns. The babies, upon their birth, may averagely be a thirty centimetres long.

The population is in sharp decrease due to the habitat degradation and the fishing that exploits its meat, the fins and the oil extracted from the liver. The resilience of the species is very low and the time for redoubling the population varies from 4 and a half years to 14. The vulnerability index is quite high, reaching 77 (2017) on a scale 100. 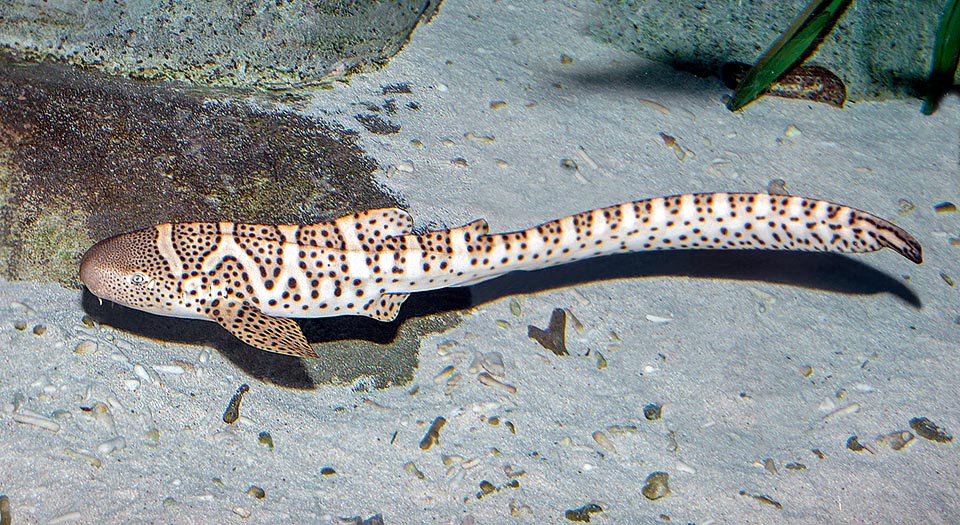 The body is crossed by white and dark vertical bands, arranged irregularly in the first thoracic segment, and the vulgar name of tiger shark originates from this design © Giuseppe Mazza