Stellars geraniums : created in Australia by a passionate in 1950 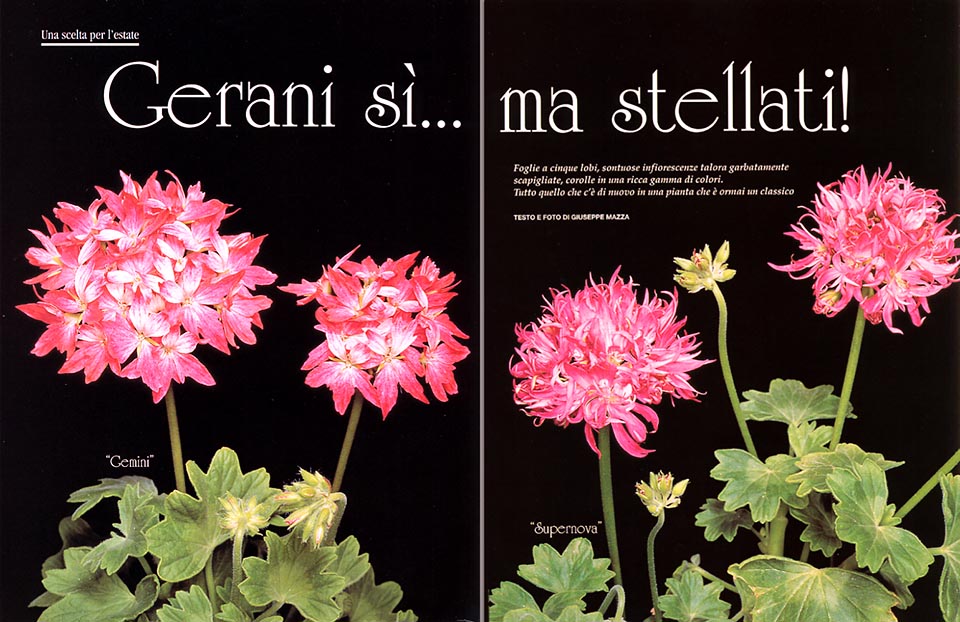 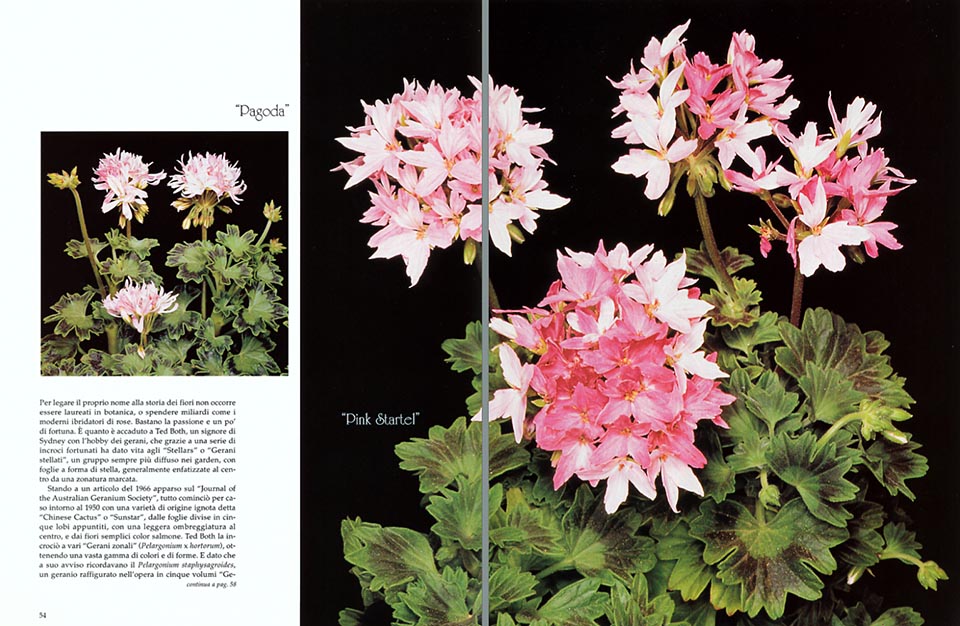 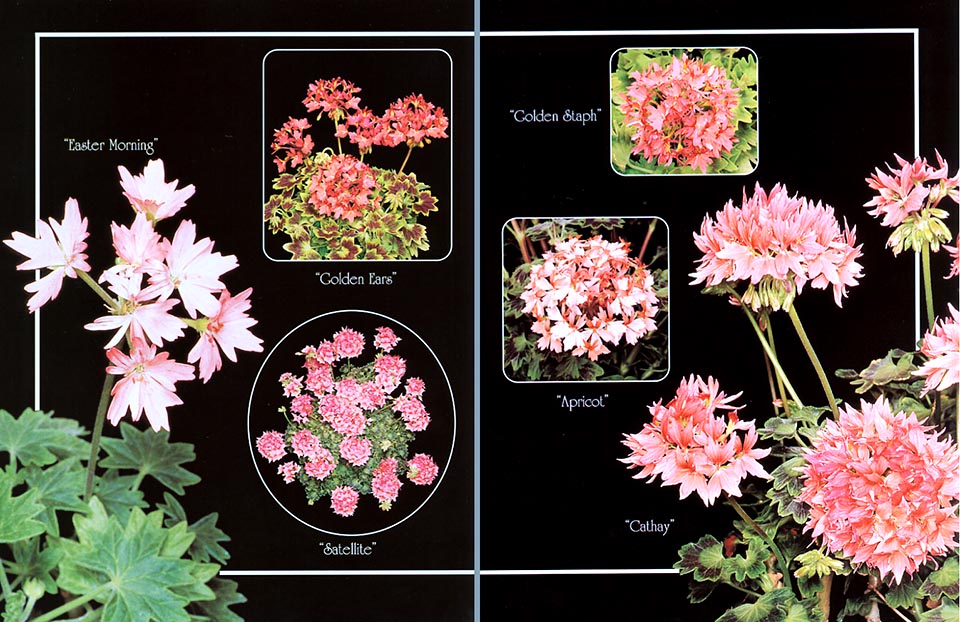 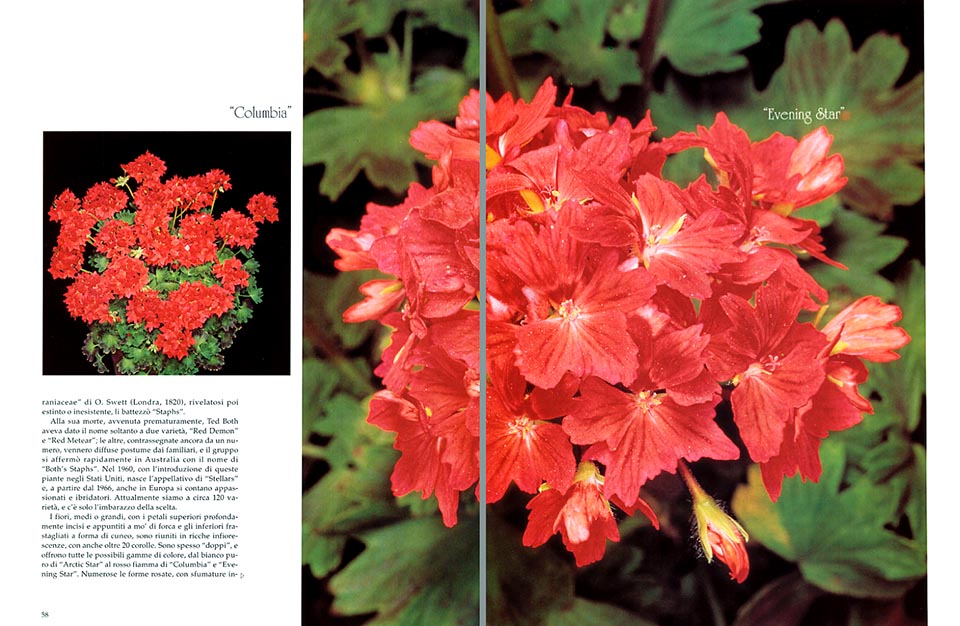 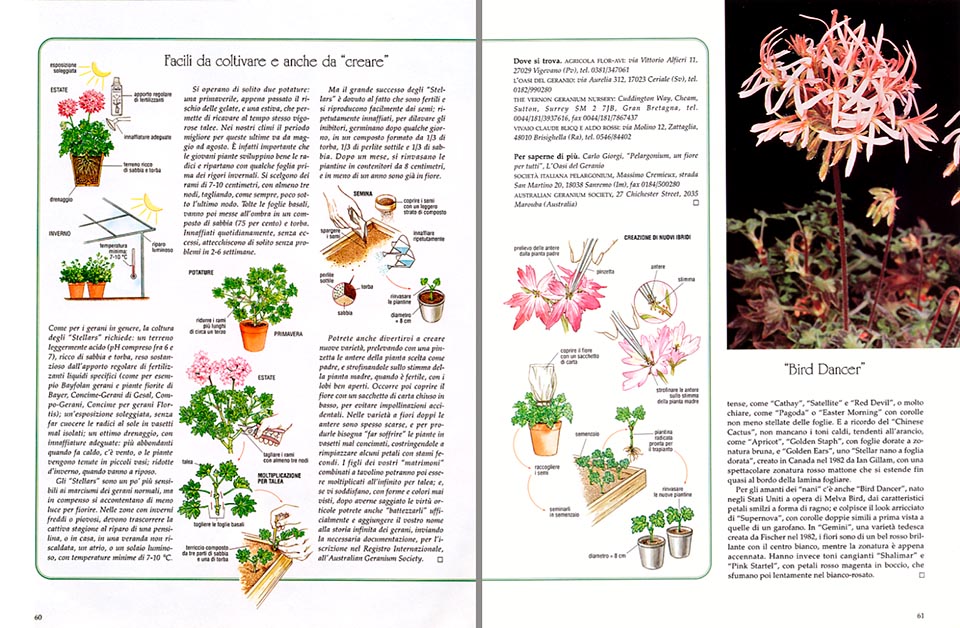 For connecting own name to the story of flowers, it is not necessary to have a degree in botany, or to spend billions hand full, as modern hybridizers of roses do. Passion is sufficient, and some luck, too.

This is the case of Ted Both, Australian hybridizer with the hobby of geraniums, who, with a series of fortunate cross breedings, has originated the ‘Stellars’, or ‘Star-shaped Geraniums’, a group which is always more common in the gardens, with star-shaped leaves, emphasized, almost always, in the centre, by a marked zone.

After an article of 1966, published on the Journal of the Australian Geranium Society, all began, by chance, around the year 1950, with a variety, of unknown origin, called ‘Chinese Cactus’, or ‘Sunstar’, with the leaf divided into five pointed lobes, with a light shading in the centre, and simple flowers salmon coloured.

Ted Both cross bred it with various “Zonal Geraniums” (Pelargonium x hortorum), getting a wide range of colours and forms; and seen that, after him, they were recalling the Pelargonium staphysagroides, a geranium shown in the book GERANIACEAE, written by Sweet, later on revealed as extinct or non existent, christened them ‘Staphs’.

By his untimely demise, he had christened only two varieties, ‘Red Demon’ and ‘Red Meteor’; the others, still identified by numbers, were circulated posthumously, by his relatives, and the group made itself known in Australia with the name of ‘Both’s Staphs’.

In 1960, upon the introduction of these plants in USA, comes into being the appellation of ‘Stellars’, and, starting from 1966, also in Europe they begin counting lovers and hybridizers. Nowadays, we have reached about 120 varieties, and there is only the problem of the choice.

The flowers, medium or large, with the upper petals deeply carved and pointed like a fork, and the lower ones, indented with the shape of a wedge, appear united in rich inflorescences, with even more than 20 corollas.

They are often “double”, and offer all possible tones of colour, from the pure white of ’Arctic Star’, to the blazing red of ‘Columbia’ and ’Evening Star’.

Numerous are the rose-coloured forms, with intense gradations, such as ‘Cathay’, ‘Satellite’ and ‘Red Devil’, or very pale, like the ‘Pagoda’ or ‘Easter Morning’, with star-shaped corollas like the leaves; and as remembrance of the ‘Chinese Cactus’, the warm tones are not missing, towards the orange, such as the ‘Apricot’, ‘Golden Staph’, with golden leaves, with brown zone, and ‘Golden Ears’, a “Dwarf Stellars with golden leaf”, created in Canada in 1982, by I. Gillam, with a spectacular red-brick zone which extends up to the edge.

For the lovers of the “dwarfs”, there is also ‘Bird Dancer’, created in USA by M. Bird, with typical slender spider-shaped petals; and the curled look of Supernova is striking, with double corollas which render, at first sight, the inflorescence similar to a carnation.

In ‘Gemini’, a German variety created by Fischer in 1982, the flowers are of a nice bright red, with white centre, whilst the zone is just hinted; and we are astonished by the change of tones of ‘Shalimar’ and of ‘Pink Startel’, with red-magenta petals in bud, which then slowly fade in a white-pink colour.

Like for geraniums in general, the cultivation of these plants requires a slightly acid soil (pH between 6 and 7), rich of sand and of peat, enriched by the regular contribution of specific liquid fertilizers; an exposition to the sun, avoiding to cook the roots with the sun, in small pots badly isolated; and a very good drainage, with adequate watering, more copious when it is hot, it is windy, or if the plants are kept in small pots, very reduced in winter, when the plants rest.

The ‘Stellars’ are more sensible to the rottenness than normal geraniums, but, on the other hand, they require less light for blooming.

Where it’s cold or it rains, they have to spend the winter under a roof, or at home, in a not heated veranda, a hall or a luminous loft, with lowest temperatures of 7-10 °C.

Normally, two pruning are to be done: one in spring, as soon as the risk of frosts is over, and one in summer, which allows at the same time to get vigorous cuttings.

In our climates, the best period for these last goes from May to August. In fact, it is important that the young plants develop well the roots, and start again with some leaves before the rigours of the winter. We have to choose 7-10 cm branches, with at least three nodes, cutting, as always, a little under the last node. Once taken off the basal leaves, they must be placed, in the shade, in a compound of sand (75%), and peat. Watered daily, without excesses, they root, usually, without problems, on 2-6 weeks.

THEY REPRODUCE ALSO BY SEED

But the great success of the ‘Stellars’ is due to the fact that they are fertile and reproduce also, easily, by the seeds.

Watered repeatedly, in order to take off the germinative inhibitors, they open, after a few days, in a compound of 1/3 of peat, 1/3 of thin perlite, and 1/3 of sand. When about one month old, we shall have to translate the small plants in small 8 cm containers, and, in less than one year, they will be already flowering.

You will be able to enjoy yourselves in creating new varieties, pulling away, with the tweezers, the anthers of the plant chosen as father, and rubbing them against the stigma of the mother plant, when it is fertile, with the lobes wide open. You have then to cover the flower with a paper bag, closed on the bottom, to avoid accidental pollinations.

In the variety with double flowers, the anthers are often scarce, and to produce them, you have to “make suffering” the plants in poorly manured pots, obliging them to replace some petals with fertile stamens.

The offspring of your “marriages” arranged on the desk, will be then suitable to be multiplied to infinity, by cutting; and if they satisfy you, with forms and colours never seen before, after having tested their horticultural virtues, you might “christen them”, in an official way, and to add your name to the endless history of geraniums, sending the required documentation, for the registration on the International Registry, to the Australian Geranium Society.

Stellars geraniums : created in Australia by a passionate in 1950 was last modified: October 21st, 2019 by Giuseppe Mazza