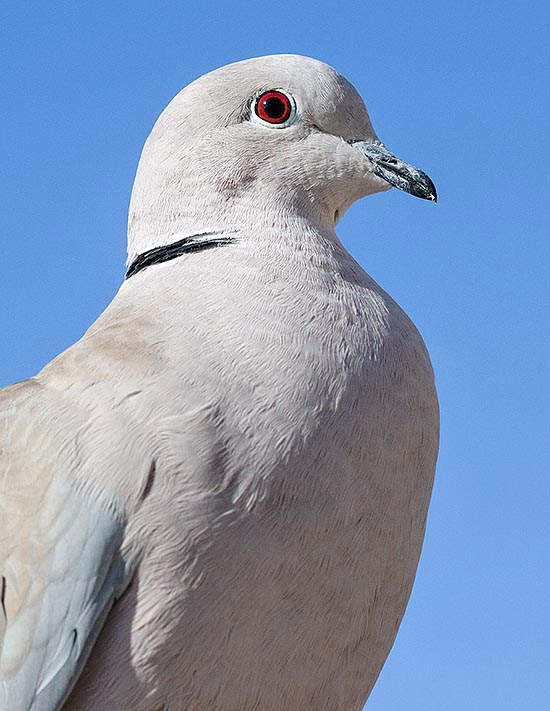 We can easily compare the campaign of conquest of Europe by this bird of Asian origin, to a well detailed and programmed military occupation plan. A gradual, methodical, continuous, without jolts or sudden long range advances, but relentless and total.

During the first decades of the XX century, the only stronghold of the Eurasian collared dove was a small colony that nidified on the banks of the Danube, in the south Balkan tract and for many years nothing could lead to think about what should have later on happened.

During the 30s the first signs were observed with colorizations towards north in a wide circular hug that then should have enclosed from west the whole Europe and part of the Mediterranean African coast.

In 1947 they reached Holland, in 1948 Denmark, in 1949 Sweden, in 1952 Belgium and in the same time the first specimen was seen in England, in 1955 the British range did expand and in 1957 reached Scotland and then later on, going southwards, all European nations. In Italy the real explosion occurred in the second half of the 60s but it was more abrupt than usual because with a pincer attack, was attacked from east as well as from west and in a very few years it became one of the territories most inhabited by this new species.

Finally, in the 70s the invasion was completed occupying the west of France, the Iberian peninsula, Ireland, the northern part of the Scandinavian peninsula and, to the east, the belt from Ukraine to Finland. It has been sighted also in the Franz Josef Land and in the Svalbard.

The last study, deep and comprehensive, on the bird populations in the European continent, date back to about a twenty years ago and quantified in more than 11 million of couples the Eurasian collared dove present in our continent. 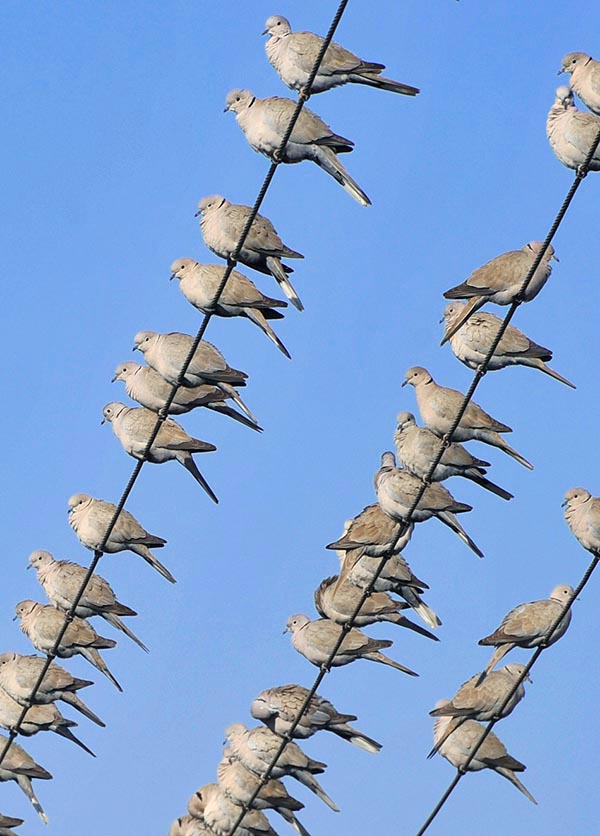 And here are his troops, in good order, ready to conquer the world © Gianfranco Colombo

A huge number that already slightly exceeded that of our traditional Dove migrating from Africa (Turtur turtur) but absolutely not comparable with that of the present population estimated by some as of more than 50 million of specimens.

It was customary during the last century to keep in cage the collared doves, very shy birds but easily tamable and easy to raise, quite similar to this dove but belonging to another very similar species, the Barbary dove (Streptopelia risoria). Species practically indistinguishable one from the other, particularly for the easy hybridization.

The etymology of the genus Streptopelia gets its origin from the old Greek.

It comes, in fact, from “streptos” = collar and “peleia” = dove, rightly due to the semicollar that encircles its nape; conversely, the species decaocto has a mythological derivation as sad as is the sound of its winy singing.

Narrates the story of a maid of the old Greece who did work tirelessly all the days doing the most menial and tiring jobs, getting as salary only 18 pieces of money per year.

Her bitter and constant complaints were heard by the gods who, for freeing her from the slavery transformed her in a bird who would have however repeated the same and mournful song to remind the vicissitudes of her life.

“Decaocto” from the union of the two Latin terms “deca” = ten and “octo” = eight to rightly remind its bitterness in the world.

As a matter of fact its song foresees the repetition of the triplet “ku kùùùù ku”, accentuated on the second sound, for six times for a total of 18 syllables. 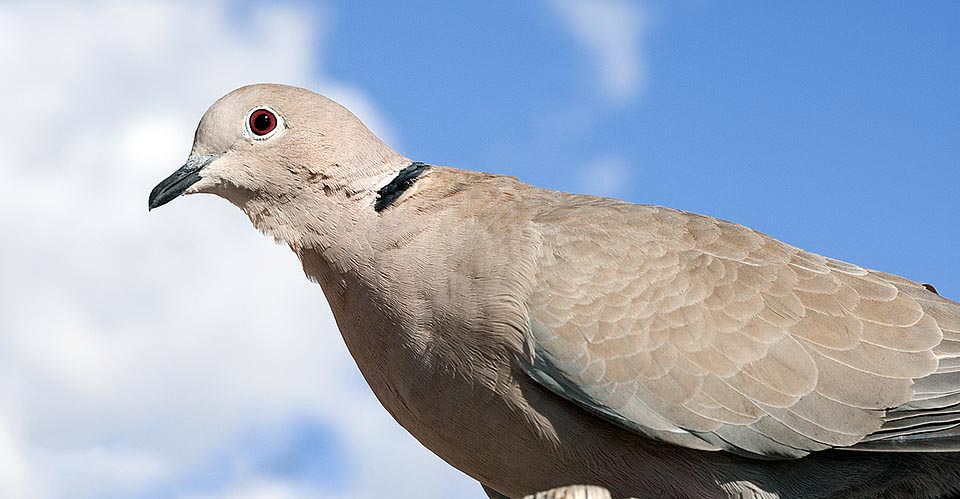 Once the range of this bird went from Middle East to Manchuria. Early in the XX century, stealthily, without any noise, the collared dove gets on the Danube, in 1947 occupies Holland as bridgehead, the next year Denmark, in 1949 Sweden, in '52 Belgium and UK, in '57 Scotland © Giuseppe Mazza

In Europe, its adoptive country, this dove is called in English Eurasian Collared Dove, in German Türkentaube, in Spanish Tórtola Turca, in French Tourterelle turque, in Italian Tortora dal collare or Tortora orientale and in Portuguese Rola-turca. As it can be noted, all vulgar names remind its Middle East origin. 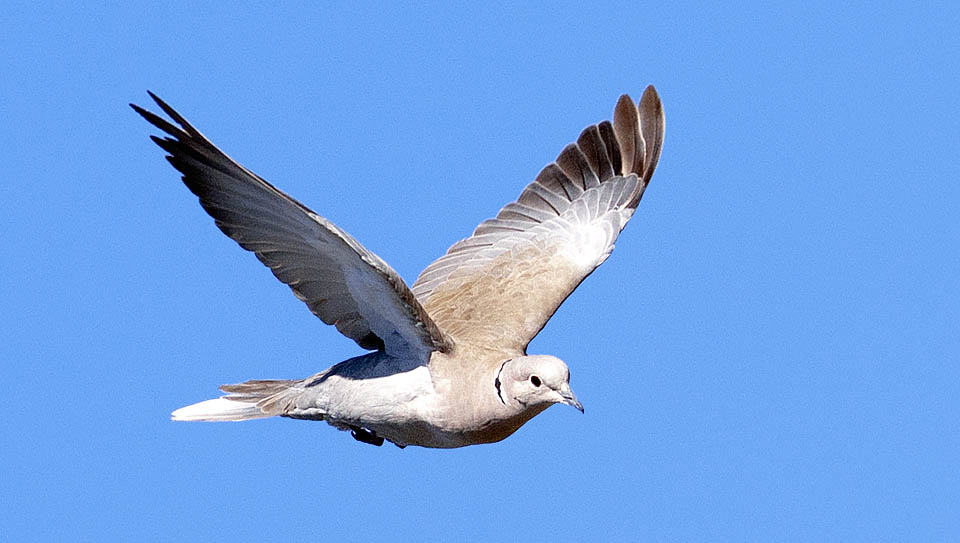 Heading south, by mid of XX century it then conquers Mediterranean Europe: Italy, France and Spain up to the African coasts, whilst on northern front fall under its bill Scandinavia, part of Ukraine and Finland with occasional presence in Franz Josef Land and in the Svalbard. It is present, introduced, in North and Central America © Giuseppe Mazza

The original range of this columbid is the Asian temperate dry area going from the Middle East up to Manchuria with an excursion southwards only in the Indian subcontinent. 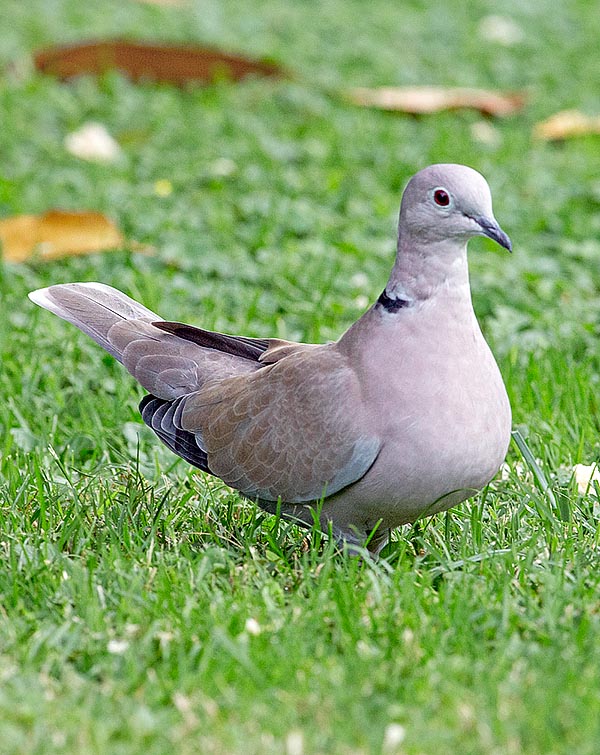 And here it is, opportunist and urbanized, in public gardens, rivalling blackbirds, pigeons and sparrows © Giuseppe Mazza

It is absent in southern China, in the Indochinese peninsula, Indonesia and Australia.

It is present on the African Mediterranean coastline and also in North and Central America, where has been introduced by the second half of the 70s.

Actually, the new occupied territories are by far much larger than the area originally covered, with direct consequences on the consistency of the populations.

The species is considered as sedentary even if, as we have seen, is quite prone to inexplicable territorial dispersions.

Like all doves, also the Eurasian collar dove loves the dry and semi arid areas and often is even found in semidesert zones but with the occupation of new territories structurally different, it has met no difficulty in adapting to the new exigencies of ambient a well as climatic.

On the contrary, it has occupied areas highly anthropized, territories with intensive cultivations, with large breedings of animals, industrial areas, parks and urban centers.

It has now become a common presence on the balconies of the house, in the gardens, on the roofs displaying a stronger attachment towards the anthropized sites than those in the country.

And from this has derived a certain benefit due to the great availability of food and to the great opportunism it shows in coexisting and sharing the food with the sparrows, the starlings and the blackbirds but even more with the pigeons nowadays ubiquitous. It does not love woody zones and heavily wooded areas and not even mountain areas especially if bare and without vegetation. 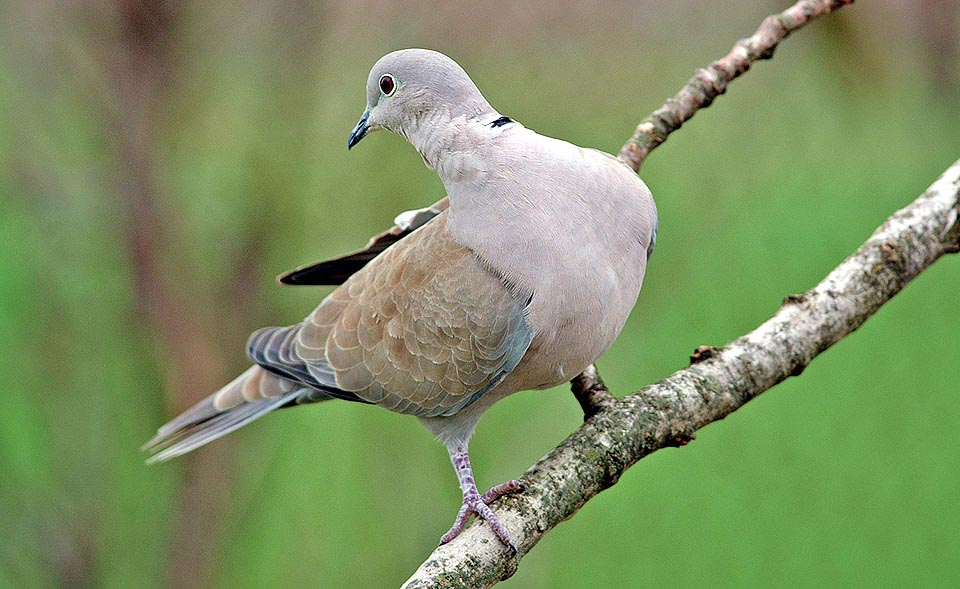 It eats grains, insects and fruits, but now with its insistent “ku kùùùù ku” repeated 6 times, as shows counting the sounds, the scientific name, keeps an eye on man © Alvaro Dellera 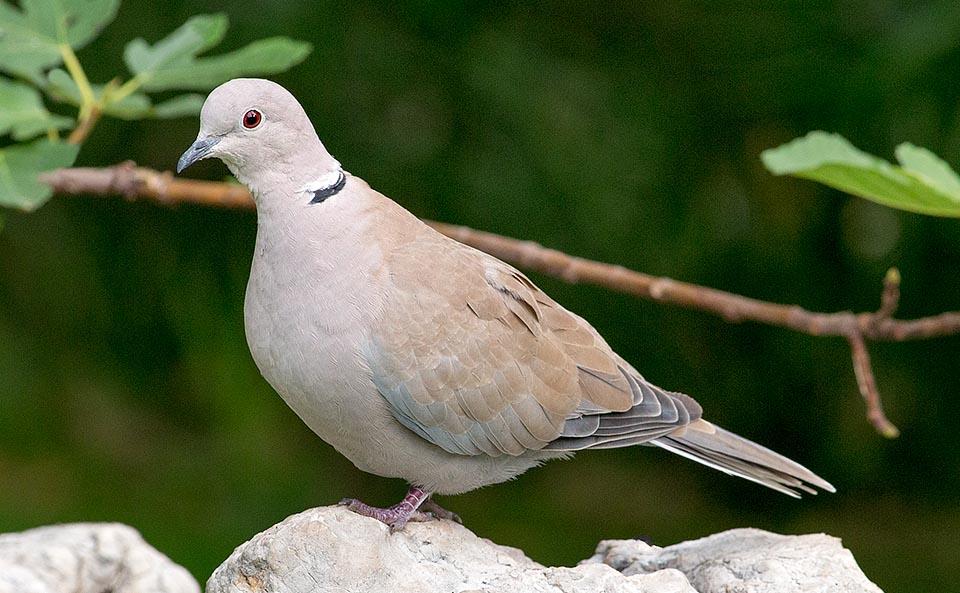 The size of the Eurasian collared dove is almost the same as any other congener. About 30 cm of length, 150-200 g of weight and 45 cm of wingspan. The colour of the livery is cream cafe latte very attenuated and uniform, with a slight paler shade on the chest and the abdomen. 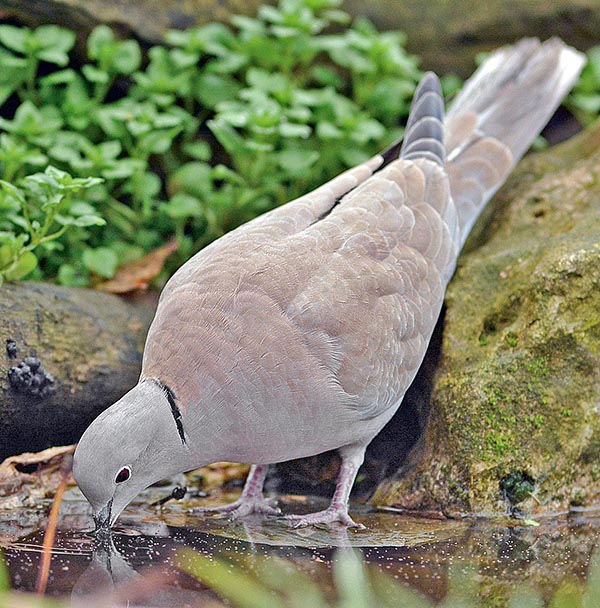 The so-called “dove grey” colour has rightly gotten the name of the bird itself. On the neck stands out a very black collar with incomplete ring that has given the scientific name to this genre.

The tail is fairly long and displays in the lower page of the feathers a wide whitish colouration with a wide belt of black colour.

The eyes are black with a strong dark red shade not always visible from far away.

There is no difference between the sexes apart a very slight bigger size in the male.

Also the young have a livery very similar to the adults even if they do not have part of the collar that becomes evident with the age.

It is not rare to see nidifications of dove even in midwinter especially in anthropized and agricultural areas where the food is always available.

Contrary to the African dove (Turtur turtur) that during the bad season gets away to the deep Africa, the Asian collared dove has learnt how to live with any meteorological situation remaining indifferent even to heavy snowfalls or to very low temperatures.

After all, these columbids are equipped with a remarkable layer of feathers and down such to grant them the endurance to unfavourable conditions. Important and essential is the availability of food whereby when possible they gather around homesteads and farms where unfailingly they find the food.

And here nidifies in a cactus pot, on a Milan balcony, after having eaten as salads all good plants. Has ignored, wonder why, the geranium. Maybe, as when nidified in the branches, for a mimetic protection from the aerial attacks or simply for shading the nest or for the bad smell of the leaves © Nadia Galli

We know that the columbids coo and also the Eurasian collared dove does this regularly but in a very persistent way so much to often become very tedious and unbearable in particular when it chooses as place where to sing the aerial of the house or the small tree in front to the window of a house. 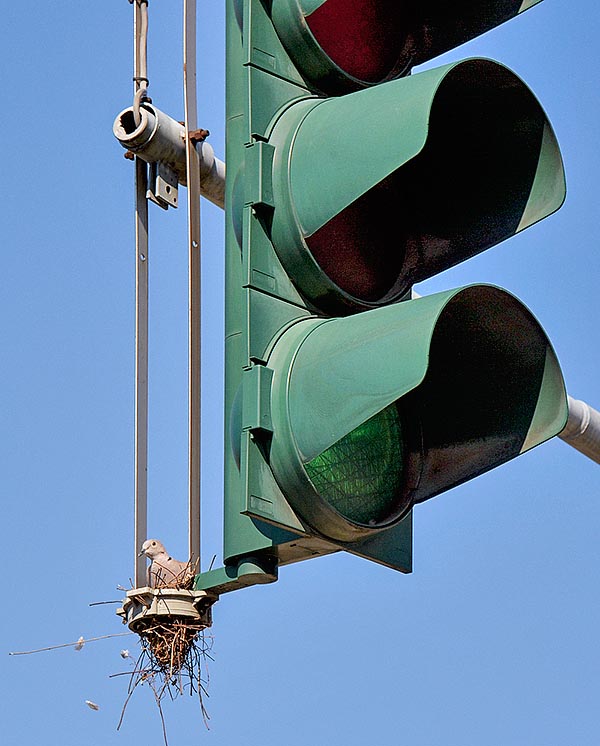 The dove reproduces even thrice a year, in any season, sometimes directing traffic © Gianfranco Colombo

After an often obsessive courting, a nest is built usually on trunks with horizontal branches, between the wild climbing ivy, on pergolas and bushes but now even on unthinkable sites such as flower pots on the balcony, over a beam of a porch, pillars of colonnades, sheds, traffic lights and street lamp posts.

Usually two very white eggs are laid and are brooded by both parents for about 16 days. The juveniles remain in the nest for three weeks more and are mainly nourished with the “pigeon milk”, the typical predigested food regurgitated directly into the goiter of the chicks.

The number of the annual nidification cannot be exactly determined as some couples, in suitable places, have been able to nidify in a continuous cycle seamlessly. By sure it effects averagely two or three nidifications during the same year.

The Eurasian collared dove eats, besides the usual grains, also fruits, berries of any sort, insects, shamrock, alfalfa and, for the anthropized specimens, any leftover, contending it to the sparrows and the blackbirds of the garden.

It has several foes and predators among which stand birds such as the Hooded crow (Corvus cornix), the Long-eared owls (Asio otus) and the night raptors and the Peregrine falcon (Falco peregrinus). Seen the promiscuity with the entropized environment, as the domestic animals take delight in to hunting these birds.

We cannot certainly affirm that this species is in danger and some European nations, among which Hungary, realizing before others the problem of the overcrowding of the agricultural areas by this bird and the consequent damages thay might occur in future, has authorized the hunt to this species, forbidding in the same time that to the African dove that, instead, is marking a systematic and continuous decrease. 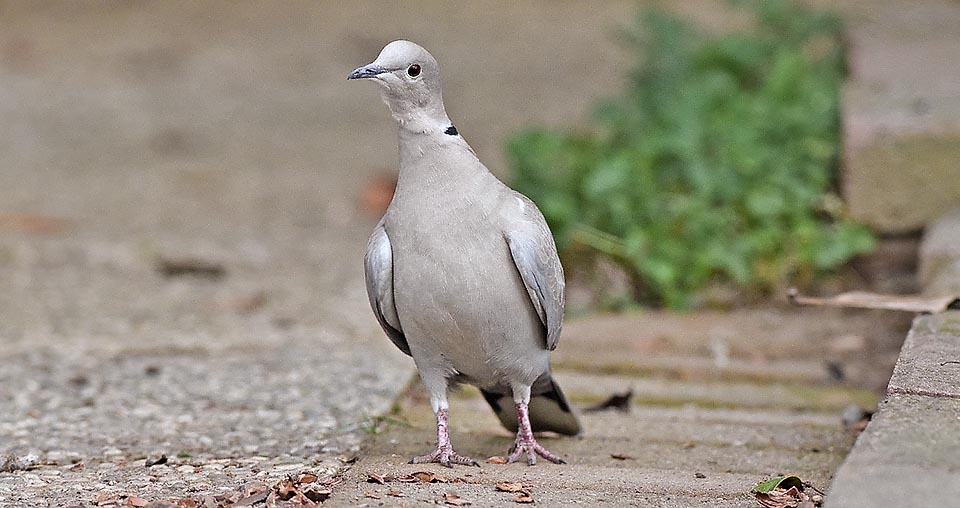 “What are you doing in my garden” seems to say boldly, and to talk of endangered species for the collared dove is really a joke © Gianfranco Colombo

→ To appreciate the biodiversity within COLUMBIFORMES please click here.