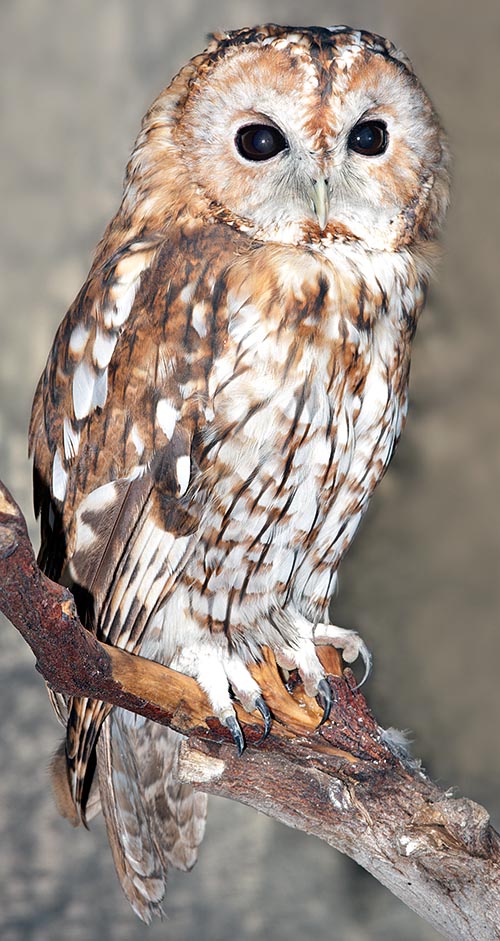 The tawny owl (Strix aluco Linnaeus, 1758) belongs to the order of the Strigiformes and to the family of the Strigidae and is in Europe on of the night raptors most known along with the little owl (Athene noctua).

Considered also its talkativeness, the persistence of its singing and facility in answering to every solicitation, it stands among the most heard and known voices in the singings of the night birds.

In Europe, to imitate the singing of the tawny owl was for the kids a fun since always practiced, because, besides being of easy execution, it had an almost immediate reaction from the solicited bird.

It was sufficient to crumple the hands on themselves keeping the two thumbs paired and parallel, creating a cavity well closed inside the palms and to blow in the fissure created by widening slightly the thumbs, imitating the typical sound hu hu hùuu hu, hu hu hùuu hu and the game was done.

If there was a tawny owl nearby, within a few minutes it began to reply obstinately and often was approaching incredibly.

Poor tawny owl! Its name has become, luckily only in Italy, inappropriately synonymous with stupidity due to its look somewhat naive and empty that makes it look foolish. You are like a tawny owl! You behave like a tawny owl! This tawny owl is cracked. In short, abused by the popular tradition.

But the truth is completely otherwise! It is a shrewd, farsighted and very careful about all what is passing close. It knows how to perfectly calibrate its fear so that it can understand when to keep motionless at the passage of possible intruders because gone unnoticed or to escape, with great foresight, very far away dangers, when feeling insecure of the chosen cache.

Then has been able to make the most from the closeness of man as security and as better availability of food, as has been done by the little owl (Athene noctua,) often its prey but at times cohabiting partner, at the due safe distance.

And about stupidity, try then to get close to its nest when the female is present. Usually calm and not perturbed at all, it is not rare the case that it flies towards you offering you its lethal claws for advising, clawing your head or the face, that the direction you are taking is wrong.

Those who study it closely know something about. It is known the experience of that photographer who lost an eye scratched by a tawny owl while he was approaching the nest and who has also written a nice story about this event. With cats and dogs, then, it’s a continuous war. And they call it ‘allocco’!

The etymology of the scientific name comes, instead, from its aversion toward the light. Rightly, from alux, a privative and lux, without the light, then later became in Latin ulucus, which was made in a vulgar alocho and then allocco, rightly an epithet to indicate a foolish and stupid being. Others derive it actually from the Arabic lokaon=crazy and foolish, then through the Iberian Peninsula transliterated in locco or loco (term still now widely used in Spain) and arrived finally in Europe as aluco. 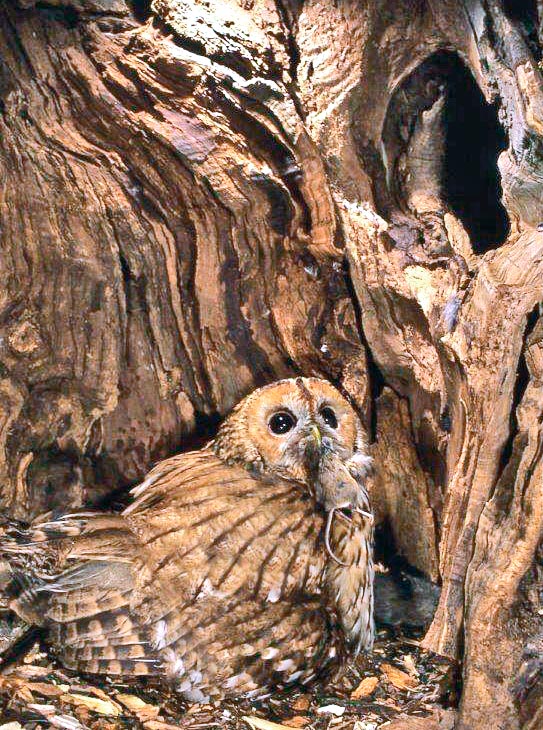 Strix from the Latin “strix, strigis” = owl that takes us immediately to striga = witch, ambient traditionally associated with all the nocturnal birds of prey.

The European common names do not have any relation with the Italian interpretation. In English Tawny owl; in German Waldkauz; in Spanish Càrabo comun and in French Chouette hulotte. In Italian, of course, Allocco.

In most of Europe the tawny owl is considered, along with the pygmy owls and the owls, as bird of ill omen and of gloom predictions.

The tawny owl has a very vast areal going from Europe to the Far East with some ramifications on the African continent. In Europe, it totally covers the Mediterranean and the temperate areas, touching the southern part of the Scandinavian Peninsula and extending up to low Siberia. It reappears then in the south of China and in Taiwan and eastward up to Himalaya with a good presence in Kyrgyzstan and in Uzbekistan whilst it is absent in the remainder of central and insular Asia. Scarce in the Middle East but well present in the Caucasic area and in the Iranian Caspian area. In Africa is limited to the western Mediterranean coasts.

It is a sedentary bird with rare movements not worthy of attention and with well settled and stable populations. Even if the tawny owl has enjoyed during the last decades of a strong benefit coming from the abandon of agricultural constructions that then have become their nidification territory, in some areas it has been noted a significant reduction in their number; perhaps due to the indiscriminate use of rodenticides in the agriculture. About a dozen of subspecies scattered in the different areals are known.

The tawny owl is a typical inhabitant of the old deciduous woods, of old gardens with old trees, twisted, full of niches and holes where it finds shelter during the day and the site for nidifying during the reproductive period. It also lives in mountain forests but never over the 1700/1800 metres, snow limit over which it should be obliged to not always appreciated altitude migrations. It has however well adapted to live in touch with the man and to take advantage of old abandoned dwellings, ceilings, barns, chimneys, cemeteries and also old munuments in the city historical centers. The strongest concentrations of these birds in Europe have been detected in various North Italy cities. 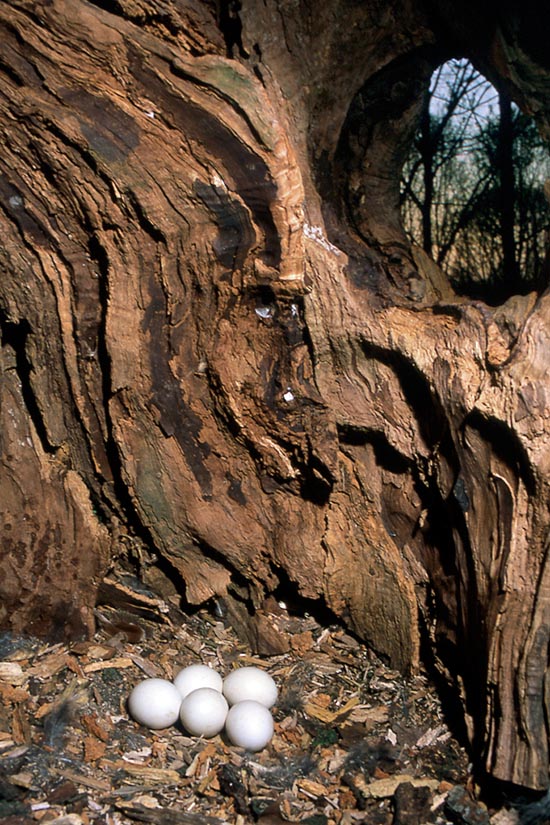 As already mentioned, it does not suffer from the proximity of the man and even less of the domestic animals with whom, especially cats and dogs, it often enters into rather heavy discussions. It loves hunting in open spaces where is able to monitor, staying perched on an observatory, when the prey transits below but also when looking during the night among the bushes resting birds that it makes them fly away to catch them in flight.

Despite having extremely big eyes, it seems that the nocturnal vision of this bird is not well developped as the other consimilars. It is thought, in fact, that the ability in catching the preys in a pitch dark is due more to its auditory capacity than visual, ability coming from the asymmetry of the auricular holes that allow it to identify, like a radar, the exact point of the point of origin of the noise. Moreover, the frontal eyes, typical of the nocturnal birds of prey, determine a binocular vision of the prey.

The flight of the tawny owl, little wavy and much gliding but is absolutely silent, as also this night raptor has the remiges fringed and equipped with barbules that weaken the noise of the beating of the wings.

The main food consists in small rodents, birds, nestlings but also of large insects and grasshoppers, preys it gulps down whole without dissecting them. Like all strigids it vomits regularly wads of rather big consistency and size that contain bones, hairs and feathers of the gobbled victims.

The tawny owl is a medium sized strigid, visually closer to the owls than to the pygmy owls even if both the interpretations might have their right meaning.

A big pygmy owl or an odd wom!

Missing are the auricular tufts typical of the owl, it is rather stocky and has wide and rounded wings typical of the pygmy owls, although being a typical night raptor, it hunts at times at dusk like the pygmy owls but does not use to camouflage, stretching the body against the trunk as the Long-eared owl (Asio otus) or the Scops owl (Otus scops) do. In any case it cannot be mistaken with the other strigids. Squat body with big head usually kept recessed into the trunk, enormous black and staring eyes, greyish beak that even if strong and hooked is almost invisible because covered by a thick layer of shaggy feathers and then a colour like a real champion of camouflaging.

There are two recognized form inside the same species. The brown form and the grey one. The first is predominant in the western part of Europe, the second one in the rest of the range. Both plumages are very camouflaged having a mix of spots, stripes, haloes, bars and shades of hazel, black, white and brown colours and with well marked but not always visible facial disc. The grey form is perfectly similar with the systematic substitution of the brown with the grey. 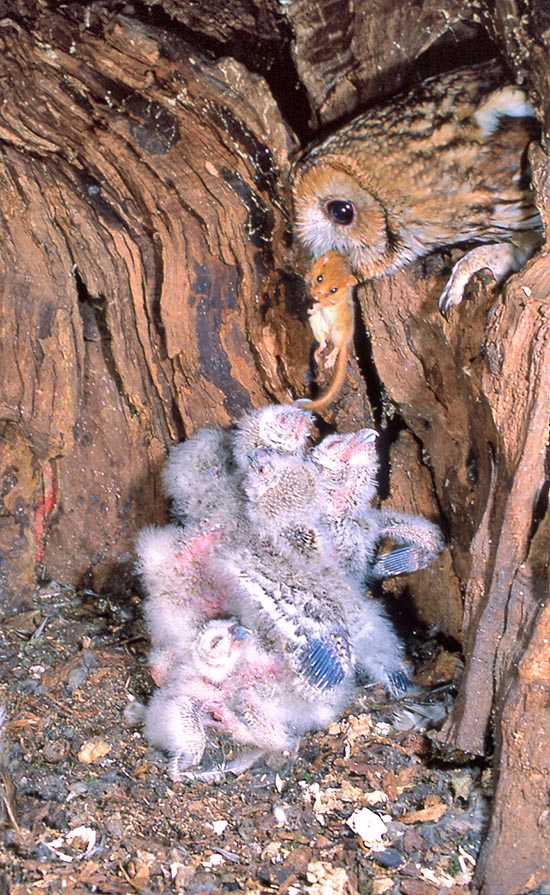 There is no dimorphism between the sexes if not a light predominance in the size of the female. The young have a livery almost similar to the adults with a slight enhancement of the spots and of the streaks.

The nidification period of the tawny owl, in the temperate area, may already start in February and ending in the month of April. Already by late autumn, the woods and the countries are enlivened during the night, by the continuous singing of this bird busy with the conquest of the nidification territory and in the research of its usual partner.

The tawny owl is monogamous and the couple keeps united for the whole life. The partners move away in the post nidification period, probably keeping in touch, to meet again, timely, in the mating period. Moreover, it has a very territorial behaviour and the conquered area is defended with tenacity.

Its song is often a duet between male and female and is a graceful sound, sweet and relaxing. Many poets and Shakespeare himself mentioned it in their literary works even if some then inevitably fall in the old superstition of considering it eerie and ominous.

Once found the ideal place, a hole in a tree, an abandoned haystack, a big fissure of an old dwelling, or in a disused chimney or on a pillar of an abandoned country house, in a nest of carrion crow or a shelter of a squirrel, lays its two to three eggs directly on the already available substratum. In exceptional cases it may lay even up to seven of them.

The artificial nests, specially prepared for the purpose, have become recently their preferred choice and they are always occupied even if located at rather close distances and at times unthinkable for such a territorial bird. The eggs are very white and fairly round.

We have already spoken of the heroic defense that this bird implements against potential predators when on the nest but on the other way it is in turn predated by other animals against whom it can’t do anything.

Eagle owls (Bubo bubo), Common buzzards (Buteo buteo) and Northern goshawks (Accipiter gentilis) are often able to decimate their broods, but the marten, when present, is surely standing among the most bitterest foes, favoured also by the presence of the nestboxes it has now learnt to visit regularly.

The breeding done uniquely by the female, lasts about one thirty days and the chicks come to life covered by a soft and very white down they lose during the follwing weeks replaced by the first immature’s feathers. They will fly out after about 40 days but will leave already the nest after 3-4 weeks to scattering all around the nest. Two more months will be necessary to reach the full independence and the complete maturity will arrive by the first year of age.

When wild they do not live long, but if captive they may reach and exceed the 25 years of age.