The species is native to Brazil (Bahia, Espirito Santo, Minas Gerais, Paraná, Rio de Janeiro and São Paulo) where it lives in the Atlantic pluvial forest, often at the margins of the clearings, from the sea level up to about 1700 m of altitude.

The name of the genus is the combination of the Greek substantives “στρῶμα” (stroma) = layer, bed and “ἄνθος” = flower, with reference to the bracts that contain the flowers; the name of the species refers to the genus Thalia that Linnaeus dedicated to the German physician Johannes Thal (1542-1583) considered as the pioneer of botany in Germany. 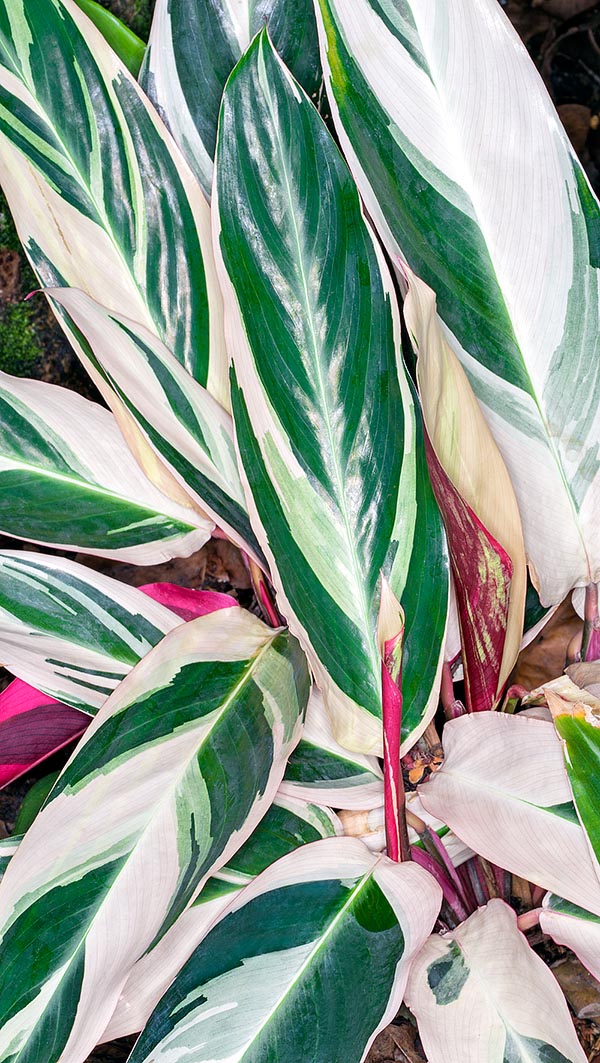 Native to Brazil, the Stromanthe thalia is a perennial rhizomatous, evergreen, 0,5-1,5 m tall. Easy ornament for the tropical and subtropical gardens and a splendid indoor plant © Giuseppe Mazza

The Stromanthe thalia (Vell.) J.M.A.Braga (1995) is a perennial rhizomatous herbaceous species, evergreen, 0,5-1,5 m tall, with short erect stem hidden by the basal leaves from which depart 1-2 branches ending in a tuft of distichous leaves, on a petiole of wine red colour. Simple leaves, oblong-ovate with pointed apex and entire margin, 25-45 cm long and 6-12 cm broad, coriaceous, of intense green colour and glossy above, often with a paler stripe in correspondence to the main vein, red wine below.

Terminal inflorescences formed by an erect scape, 30-50 cm long, ending in a panicle, about 20 cm long and of 5-7 cm of diamter, formed by bracts subtending tiny flowers. Calyx with 3 oblong sepals, concave, about 1 cm long, almost as long as the sepals, 4 petaloid staminodes in two verticils, one fertile stamen and inferios ovary; scape, rachis, pedicels and sepals are of deep pink to bright red colour.

It usually reproduces by division at the vegetative regrowth in spring.

The species itself is of great ornamental value due to the luxuriant foliage and the coloured inflorescences, but it is so even more the variety ‘Triostar’ (see photo), known at nursery level also with the names of ‘Tristar’ and ‘Tricolor’, with leaves variegated in green, white, pink and burgundy, that has met immediate success as indoor plant.

Cultivable in open air in the tropical and humid subtropical climate zones and marginally in the milder temperate warm ones, where temperatures around the 0 °C are short lasting exceptions, keeping in mind that the variety is more sensitive to the low temperatures than the species. It requires a slightly shady position, even if with some hours of sun in the morning, to shady, and draining soils, rich of organic substance, acidic to neutral, maintained constantly humid, but without stagnations.

In pot for the decoration of inner spaces requires a luminous position, lowest winter temperatures over the 15 °C and high atmospheric humidity, that may be obtained with frequent nebulizations with non calcareous water at ambient temperature, in order to avoid unaesthetic spots on the leaves, or placing the pot on an ample saucer filled with expanded clay, or rubble, and water at a level not to touch the bottom of the pot, thus creating a humid microenvironment around the plant. Regular waterings in order to maintain constantly humid the substratum, that must particularly aerated and draining, and monthly fertilizations, during the vegetative period, with hydrosoluble balanced products with microelements at half the dosage shown on the package. It is easily subject to attacks by mites and mealybugs, it is therefore to be frequently checked in order to be able to intervene quickly with specific products.