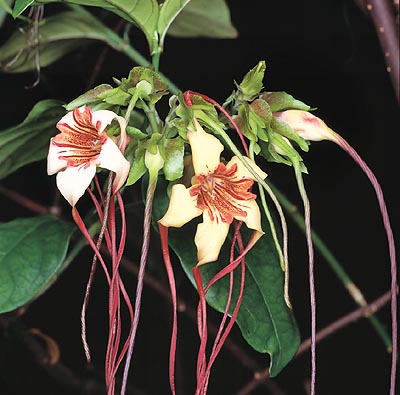 The name of the genus comes from the combination of the Greek words “strophos” = twisted cord and “anthos” = flower, with reference the long extremities of the threadlike petals, especially when still in bud; the name of the species is dedicated to its collector, the botanist P.R. Preuss.

Evergreen sarmentose shrub with dark purple stems and opposite ovate leaves, with sharp apex, long up to 18 cm, and of a glossy dark green colour. Terminal inflorescences carrying bell-shaped flowers, of white colour, changing to yellow and orange, dotted and striated of red and with the extremity of the petals sharp and hanging, of brown red colour, which prolongs up to about 18 cm. The fruits are brown cylindrical follicles, long up to about 28 cm, containing several seeds of about 2 cm of length, pubescent, with a tuft of hair, suitable for favouring their dispersal. It reproduces by seed and by softwood cutting.

Plant with very showy flowers, due to their unusual form, suitable for tropical climates and subtropical ones, in partly shaded position and in humus-rich soils, maintained humid, but well drained; to be cultivated, elsewhere, in greenhouse, as it does not bear temperatures even of a few degrees over the 0°C. All the parts of the plant contain potentially toxic substances, between which some cardiac glycosides.