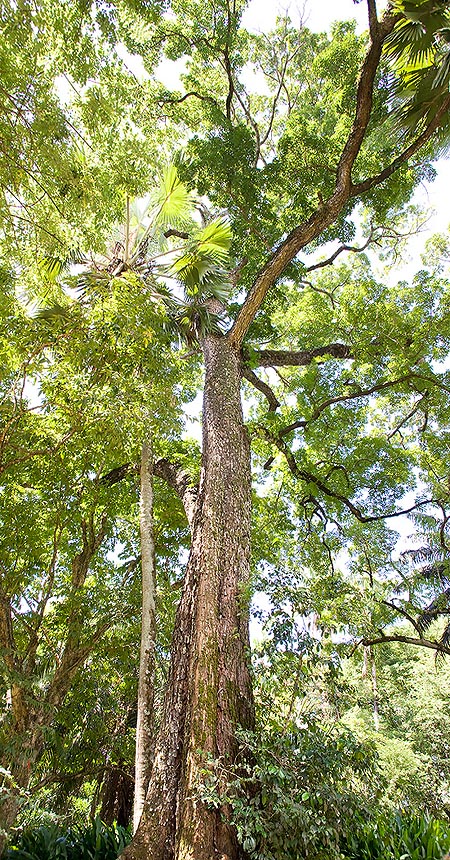 The Swietenia mahagoni is an endangered species © Giuseppe Mazza

This species is native to USA (Florida) and the Caribbean (Bahamas, Cuba, Dominican Republic, Haiti and Jamaica), where it grows in the dry as well as in the humid forests up to about 800 m of altitude on prevailingly calcareous soils.

The genus is honoured to the Dutch physician Gerard van Swieten (1700-1772), who was one of the founders of Vienna Botanical Garden; the name of the species might come from the name “m’oganwo” given in Jamaica by the African slaves to this tree which characteristics similar to an African tree (Khaya ivorensis), called “oganwo” = king of the wood.

The Swietenia mahagoni (L.) Jacq. (1760) is an evergreen or semi-evergreen tree, about 30 m tall, much ramified with a trunk which may exceed the metre of diameter, with the bark which, in the old specimens, is fissured and reddish-brown.

The leaves are alternate, paripinnate, 10-18 cm long, with 2-4 pairs of ovate lanceolate or ovate elliptic leaflets, 2-8 cm long and 2-3 cm broad, with entire edge. The inflorescences are axillar panicles, 5-16 cm long, carrying on the same inflorescence, unisexual flowers of both sexes with ovate, about 3 mm long and greenish yellow petals. The fruit, on a long and robust peduncle, is an erect woody capsule, ovoid, 5-12 cm long, of dark brown colour, which opens at the base in 5 valves, containing some hundred of flat seeds, winged, 4-5 cm long and of dark brown colour.

It reproduces by seed which, if fresh, germinates in 2-3 weeks at the temperature of 22-24 °C; it begins to bloom and fructify between the tenth and the fifteenth year of age.

The wood of the species of Swietenia (mahogany) is considered as the best for furniture, frames and prestigious decorations due to its appearance, stability in the time and resistance to the sagging and is, moreover, easy to be worked; it is also utilized for musical instruments to which it confers a particular timbre.

The wood of the Swietenia mahagoni is dark red with straight veins and was initially utilized in the ship buildings, its employment for realizing prestigious furniture was started only from the 1700. Due to the past indiscriminate felling, the mahogany of this species is not any more commercialized, it is available only rarely and in limited quantities, mostly coming from small African plantations; presently, the mahogany utilized comes almost exclusively from the Swietenia macrophylla, native to continental America, from Mexico to Bolivia and Brazil.

The species has also a limited ornamental utilization, as isolated specimen in parks and vast gardens, as well as street tree, in the tropical and subtropical climate zones, where the temperatures around the 0 °C are a short-lasting exception.

It grows in full sun or in slight shade and is not particularly demanding about the soil, acidic or alkaline, even if it better grows in much draining soils and in climates with great rainfalls regularly distributed, it can, however, resist to drought periods, like those taking place in the seasonal climates. In such case, it may lose the leaves for some weeks by the end of the dry period; it has also a fair resistance to saltiness.

It is subject to several fungous sicknesses and to the attack of insects, in particular of the genus Hypsipyla, which may cause serious damages. Finally, various parts of the plant are utilized in the traditional medicine.

The International Union for Conservation of Nature (IUCN) has inserted the species into the red list of the species at risk of extinction as “endangered”; it is moreover inscribed into the Appendix II of the CITES (species whose trade is ruled at international level).

→ To appreciate the biodiversity within the MELIACEAE family please click here.