The species is native to Lesser Antilles where grows in the coastal forests from the sea level up to about 300 m of altitude.

The exact derivation of the generic term is unknown, the best hypothesis is that it comes from the name “syagrus” given by Pliny the Elder (23/24 AD-79) to a variety of date palm; the specific name is the Latin adjective “amarus, a, um” = bitter, with reference to the taste of the endosperm.

The Syagrus amara (Jacq.) Mart. (1847) is an unarmed monoecious species with solitary erect stem, cylindrical with enlarged base, that in nature may reach 18-20 m of height with a diameter of no more than 20-22 cm, of grey colour and on which are visible the rings trace of the junction of the fallen leaves. The leaves, on an about 30 cm long petiole, are pennate, up to 3 m long, with about 100 pinnules per side, rigid, irregularly distributed on the rachis at different angles in groups of 2-3, in the central part long up to 90 cm, of dark green colour. Ramified inflorescences among the leaves (interfoliar), enclosed during the initial phase of growth in a woody spathe, with golden yellow flowers arranged in groups of three, two male flowers with at the centre a female one, but in the final part of the ramifications, where only male flowers are present. The fruits are ellipsoid orange drupes, 5-7 cm long and of 3,5 cm of diametre, containing one seed only. 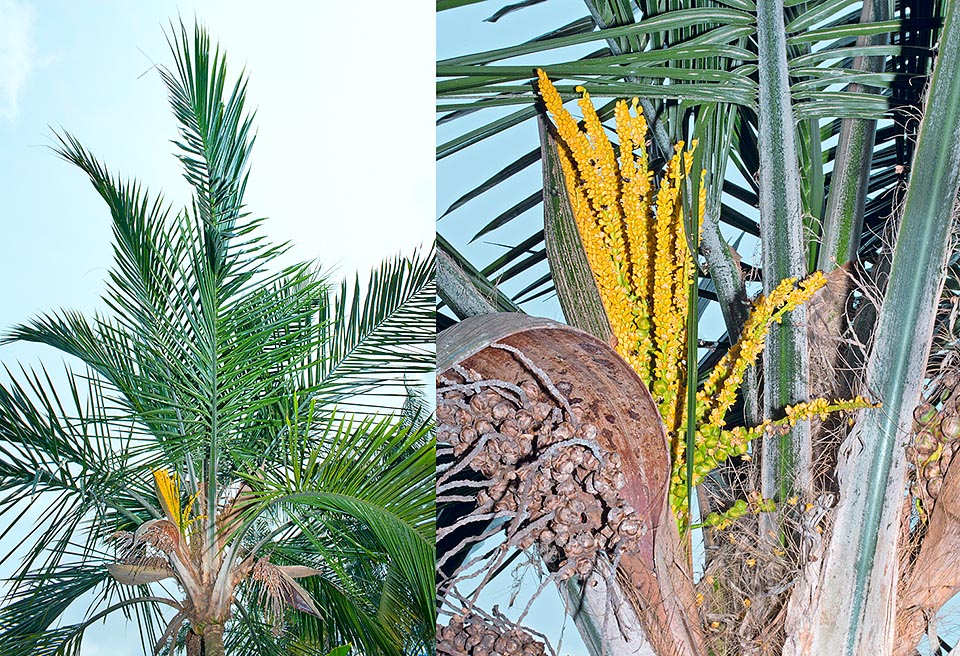 Syagrus amara is a monoecious species of Lesser Antilles where reaches 20 m with 22 cm stems. Interfoliar inflorescences with golden yellow flowers in groups of three, two male with a female in the centre, but in the ramifications final part where only male flowers stand. Fruits, as the Latin name says, are sour © Giuseppe Mazza

It reproduces by seed, in draining loam maintained humid at the temperature of 25-28 °C, with germination times of about two months.

Frequently utilized due to its remarkable ornamental characteristics, that recall the coconut tree (Cocos nucifera L., 1753), in the parks and gardens of the tropical and subtropical zones, its cultivation may be tried in particularly sheltered position in the milder temperatures where temperatures close to 0 °C are exceptional events and of short duration. Requires a semi-shaded position during the juvenile stage, then in full sun, furthermore, is not particular about the soil and resists, when adult, to drought periods, but grows at the best in the rich, draining ones and with ample availability of water; it tolerates soils even slightly saline, consequently can be cultivated close to the sea.

The pinnules, duly treated and dried, are locally utilized for realizing various handicrafts, such as baskets, bags, headgears, etc.; from the endosperm of the unripe fruits they get a slightly bitterish alcoholic drink.