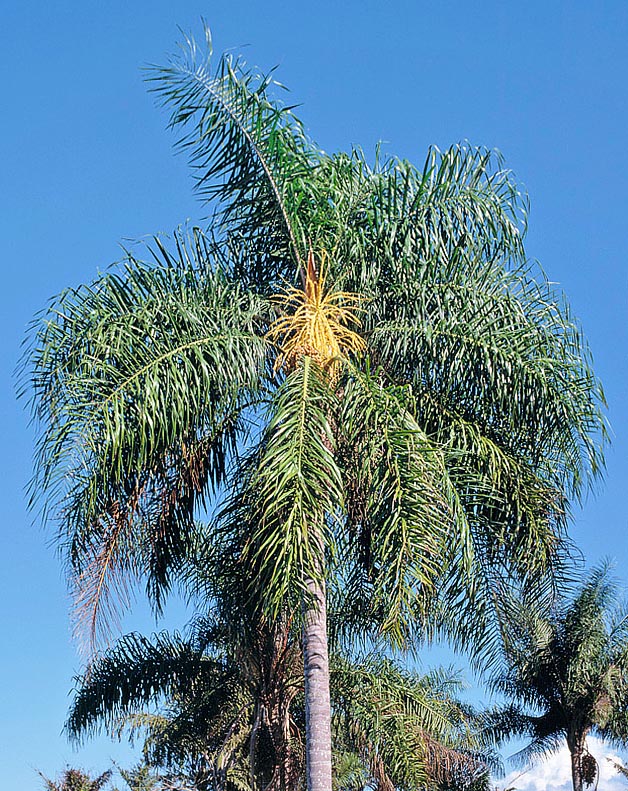 The Syagrus romanzoffiana (Cham.) Glassman (1968) is native to Brazil, Argentina, Paraguay and Uruguay.

The exact origin of the name of the genus is unknown.

The most credited supposition is that it comes from the name “Syagrus”, given by Pliny the Elder to a variety of date palm.

The species was honoured to the politician Nikolai Petrovich Romanzoff (1754-1826), who financed the second Russian expedition in the Americas.

Spread in a vast region, with a great variety of vegetable forms and climates, it presents many local morphological variations.

Palm with a columnar, single, trunk, 30-50 cm of diameter, tall up to about 16-18 metres, smooth, of greyish colour and with the rings of the scars of the foliar petioles well spaced and not much evident, particularly in the oldest part of the trunk.

The leaves are pennate, bent, long up to 4 metres, of a colour which goes from pale to dark green, depending on the characteristics of the soil (the species is prone to be acidophilous), with several leaflets inserted at different angles and with the hanging extremities which give the leaf the typical feathery look. Is a monoecious plant. It produces an inflorescence shorter than the leaves (1,5 metres at the most), very ramified, which comes out from a woody spathe, carrying cream-yellow coloured flowers. The fruits are ovoid, about 3 cm long, of yellow to orange colour, produced in huge quantity.

The Syagrus romanzoffiana multiplies by seed, which germinates in about 4-6 months. Palm of a very important ornamental value, widespread in the tropical and subtropical countries, has had during the last decades a remarkable expansion also in the Mediterranean climate countries. In its favour, as a matter of fact, it has a fast growth, the ease of transplant also for adult specimens, and a fairly good resistance to the low temperatures, up to -5 °C. 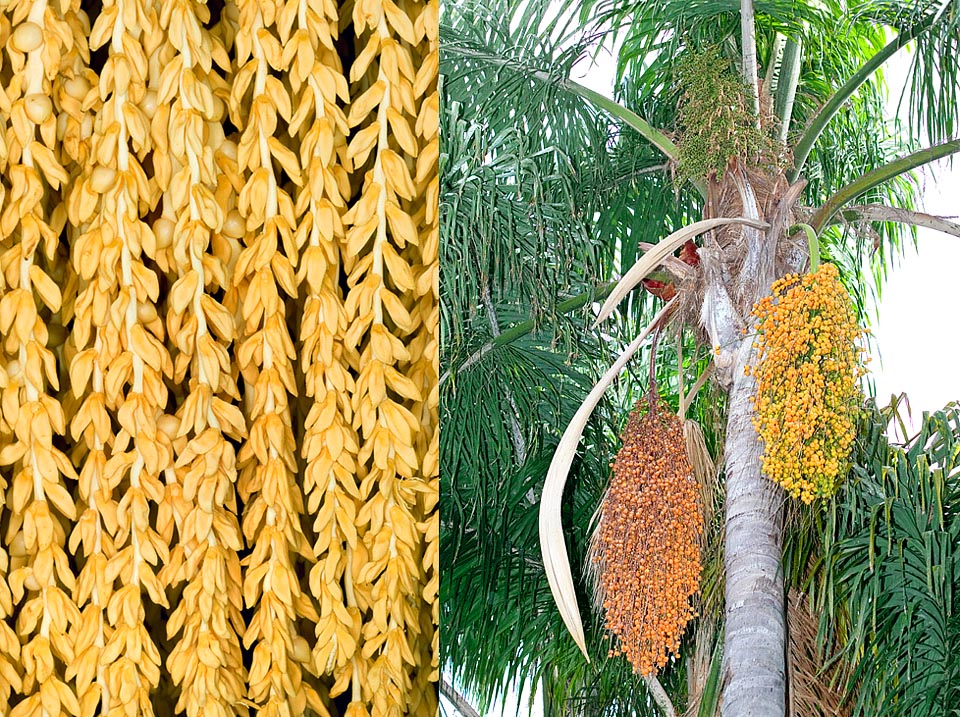 Inflorescence close-up and tree full of fruits. Due to its big ornamental value, this is now affirming in the Mediterranean climates too © Giuseppe Mazza

The Syagrus romanzoffiana grows better in full sun and in soils regularly watered, excepting the alkaline ones, unless proper corrections are effected. In the native areas, apart from the ornamental purposes, it is utilized also as nourishment (leaves and fruits) of the livestock.