Known as Grey wrasse, the Symphodus cinereus (Bonnaterre, 1788) belongs to the class of the Actinopterygii, the ray-finned fishes, to the order of the Perciformes and to the family of the Labridae.

The name of the genus Symphodus comes from the Greek “συμφύω” (synfuo) = to grow together and “ὀδούς” (odous) = teeth, hence “teeth grown together”, small and almost hidden by the gingival tissue and by the lips.

The name of the species cinereus reminds simply, in Latin, that its colour is, roughly, that of the ash, especially on the back during the reproductive period; anyway a dull colour, funeral, if compared to the other species of Symphodus and more generally to that of the multicoloured world of the Labridae. 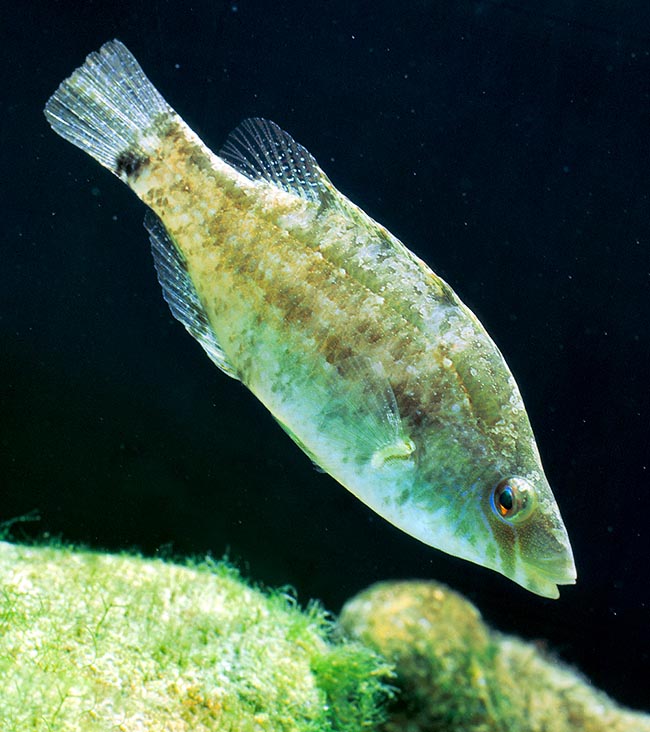 Frequent in the Mediterranean, in the Black Sea and along the Atlantic coast from Gibraltar to the Bassin d’Arcachon, the Symphodus cinereus is usually a 10-15 cm small wrasse with a record, in the males, of 18 cm © Giuseppe Mazza

Present along all Mediterranean coasts, including the Black Sea, goes then northwards, after Gibraltar, reaching in the Atlantic the Bassin d’Arcachon.

It loves the calm waters, the soft bottoms rich in vegetation and debris, the lagoons and the mouth of the big rivers, such as, for instance, the Danube. Frequent in the prairies of Neptune grass (Posidonia oceanica), usually swims at 1-20 m of depth.

The Grey wrasse is usually 8 cm long, but males reach even the 15 cm, with a record of 18 cm. In fact, the Symphodus cinereus is a protogynous hermaphrodite, that is with females that while growing transform in males. These may already reproduce when about one year old, around the 4 cm of length, but only when exceeding the 7 cm can transform in males.

The livery is extremely variable depending on the locality, the season and the sex. Usually it is grey-greenish with white small dots but the background colour can also be pale green or tending to reddish. Characteristic is the black dot at the base of the caudal peduncle. We can note also a dark stripe starting around the eyes that goes down surrounding the throat. The belly is whitish and the sides have at times two dark longitudinal lines. The nuptial livery of the males foresees yellow-orange belly and throat, cheeks streaked with yellow and light blue and grey brown back.

They talked about a subspecies of brackish waters, the Symphodus cinereus staitii, but nowadays it is considered as a synonym. 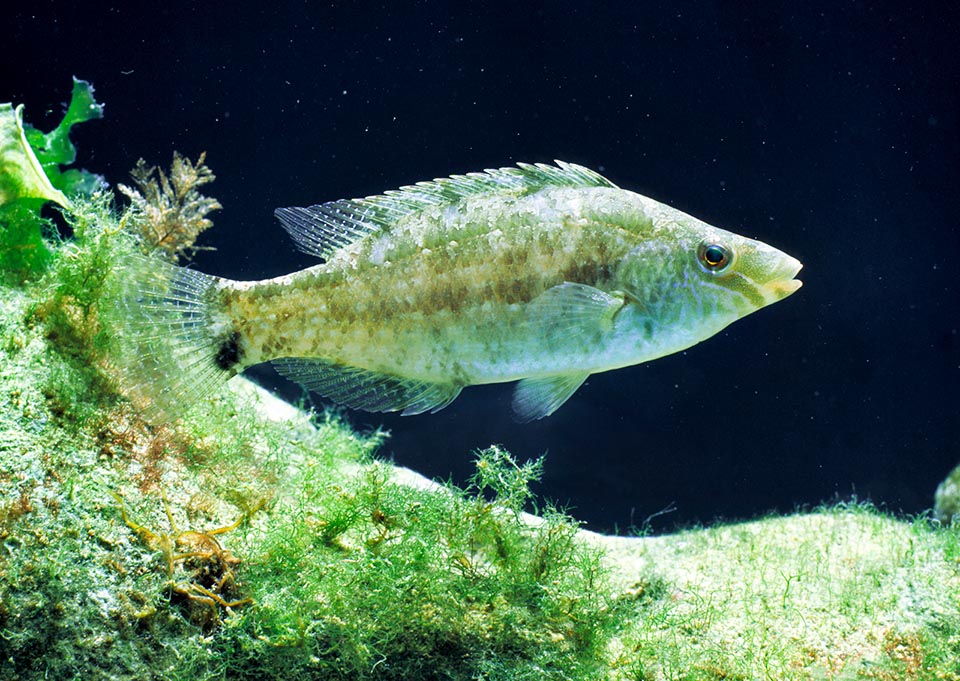 Females are already able to reproduce one year after birth, when they reach the 4 cm of length. Then, around the 7 cm, they transform in males that during the reproductive period attract the females of the group with nests dug in the sand adorned with shells and intertwined algae. The eggs are surveyed till the hacking © Giuseppe Mazza

During the reproductive season, the males dig in the sand a cup-shaped nest, decorated with seaweeds and shells, to attract the females and entice them to lay. They defend it energetically from the male intruders, but there are also some young naughty ones, at times disguised with a livery similar to that of the females, that while passing, as a per a chance, over the nest contribute to insemination. In any case, it is always the dominant male who surveys the eggs till the hatch.

The life expectancy of the Symphodus cinereus is of 5-6 years. The vulnerability index of the species, with a possible doubling of the populations in 1,4-4,4 years, is nowadays (2020) relatively low, marking just 27 on a scale of 100.