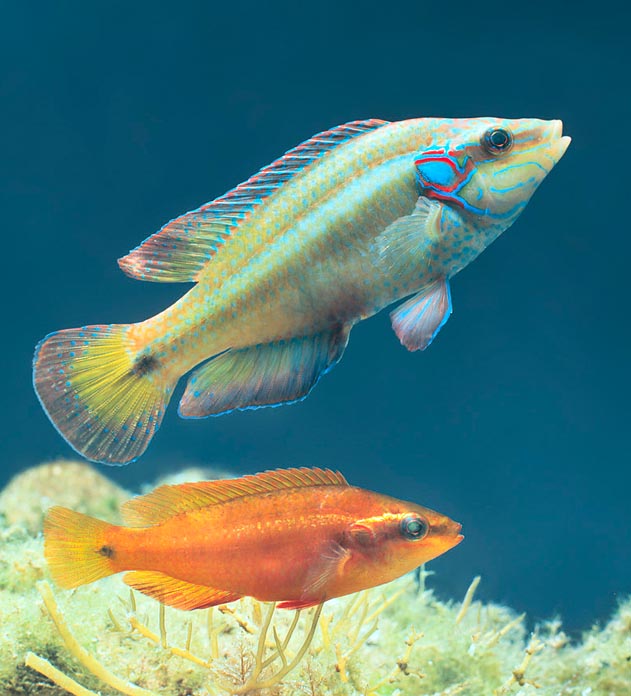 The Ocellated wrasse (Symphodus ocellatus Linnaeus, 1758) belongs to the class of Actinopterygii, the ray-finned fishes, to the order of Perciformes and to the family of Labridae.

The name of the genus comes from the Greek “syn” = together and “odous” = teeth, therefore, “teeth grown together”, which are almost not seen, hidden by the gingival tissue and by the lips.

The specific epithet “ocellatus” comes from the Latin “ocellus” = small eye, but according to what Linneo writes it refers not to the true eye which, in fact, is proportionally quite large, but to the eyespot present at the start of the caudal fin. There is another very variable eyespot near the eye, at the upper angle of the preopeculum.

There is then another ocellus, less conspicuous, at the base of the caudal fin.

These are the two fixed points of the species, which has a very variable livery.

It is present in the whole Mediterranean, including the Black Sea and the Azov Sea. A small presence along the Atlantic Spanish coasts is not confirmed.

It lives in shallow waters, in few metres of depth. At times, even less than 1 m and never under the 30 m. Solitary, it loves the rocky coasts offering food and caches, but it is not rare in the ports and among the prairies of Posidonia (Posidonia oceanica). 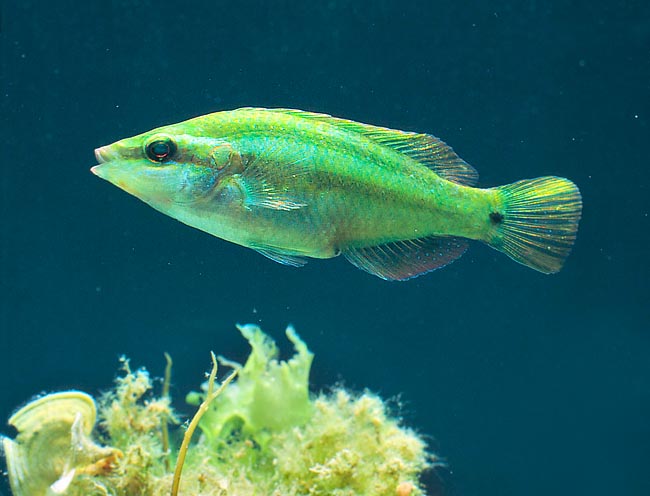 The males reach the 13 cm and the females do not exceed the 6 cm.

The livery is extremely variable, also due to the protogynous hermaphroditism, that is, with females which may transform in males.

Generally speaking, the males have a green background and for the females the same is olivaster tending to the brown. The ocellus close to the operculum in the males is emerald green, at times tending to the blue, whilst it is almost black in the females. In any case, it has always a tiny red border.

There are then orange subjects with darker ocellus, tone on tone, always bordered of red; completely green subjects, with the operculum having a red tiny border; and rare specimens of a nice luminous yellow colour with dark operculum, always more or less edged of red. 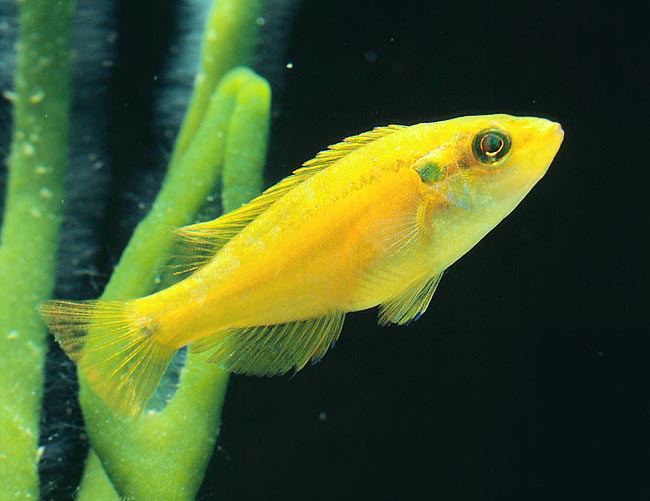 The nuptial livery of the males is beyond description, so many are the arabesques and the tints. Better view the photo at the top.

The ocellated wrasse nourishes of polychetes, bryozoa, molluscs and crustaceans. The males build up with the seaweeds real and true nests, cup-shaped, similar to those of the birds.

They are fully active in late spring-early summer. They weave one nest per week, usually placed less than 10 m far from the previous one. The eggs, when just laid, are sticky and the male, unlike that of the Peacock wrasse (Symphodus tinca), not only keeps watch on them, sending away, as it can, the predators, but lovely ventilates them with the fins, until the hatching, for a better oxygenation. The lifespan of the ocellated wrass is of 5 years.

The vulnerability index of this species is of 14 over 100.