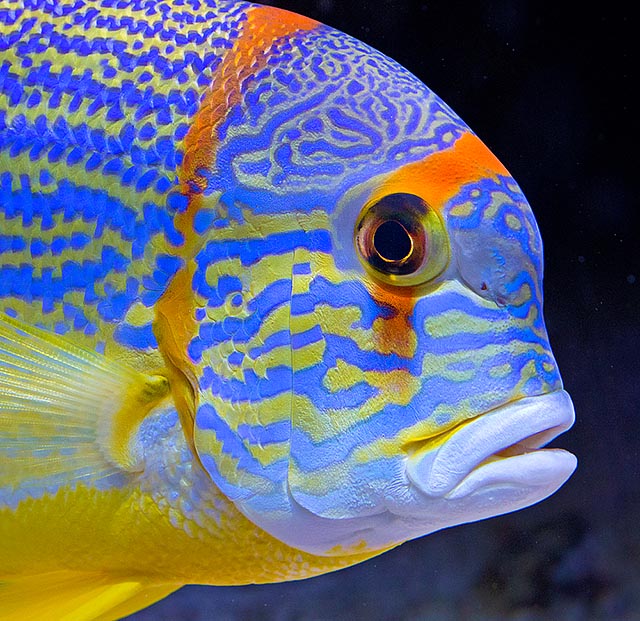 The Sailfin snapper (Symphorichthys spilurus Günther, 1874) belongs to the class of Actinopterygii, the ray-finned fishes, to the order of the Perciformes and to the family of Lutjanidae that coounts about 110 species.

The name of genus Symphorichthys, that has this species only, has a complicated origin.

In 1872 Günther called a fish Symphorus taeniolatus creating the genus Symphorus from the Greek “syn” = together, “physis” = physical look and “oura” = tail, because he considered this species as very similar, up to the tail, to the common snapper.

Two years later, always Günther discovers our fish and calls it Symphorus spilurus because in the juvenile shape is practically the same as the previous one, except for the black spot on the caudal peduncle.

But unbeknownst to him, the first species had been already baptized in 1860 by Bleeker as Mesoprion nematophorus. 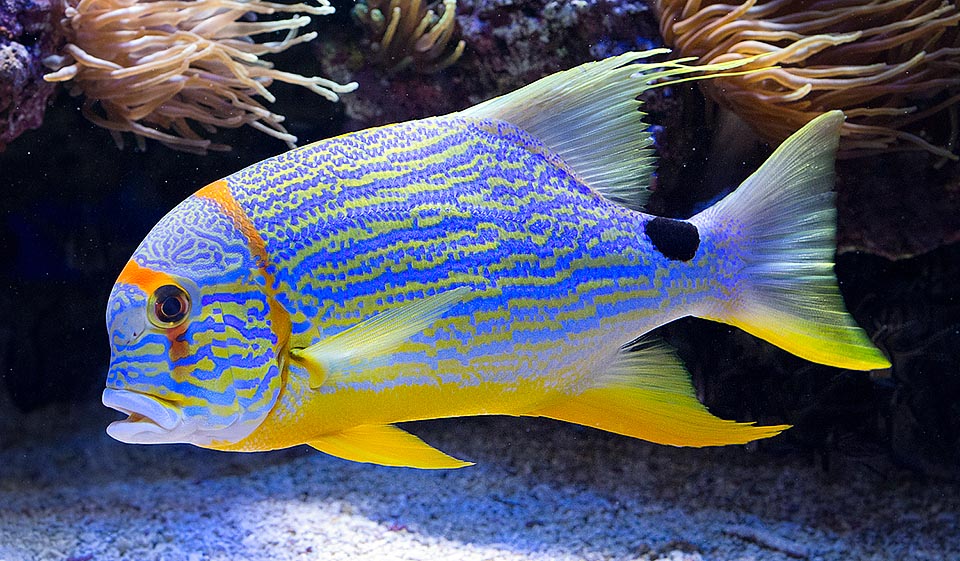 Luckily, the name of the species spilurus, comes simply from “spilos” = spot and from “oura” = tail, with reference to the showy black spot on the caudal peduncle. 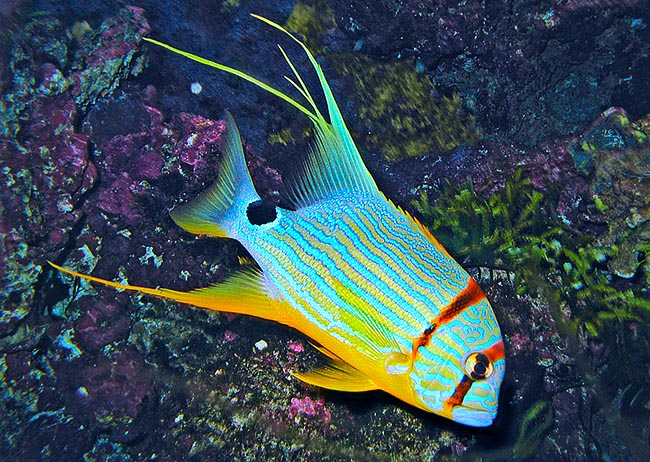 Symphorichthys spilurus is at home in the tropical waters of the Indo-Pacific. Indicatively, we find it in Thailand, Malaysia, Singapore, Indonesia, Vietnam, Philippines, Hong Kong, Macau, Taiwan and Ryukyu Islands up to southern Japan. Eastwards is present in the Palau Islands, in Micronesia, Papua New Guinea, Solomon Islands, Australia, Vanuatu Islands, and New Caledonia, up to the Tonga archipelago.

It lives on the sandy bottoms among the madreporic formations up to around the 60 m of depth.

The lips are fleshy with a line of small teeth on the upper jaw and three lines on the mandible. At the centre of the first line, on both sides, we note some small conical canines for seizing the preys. The showy dorsal fin has 10 spiny rays and 14-18 soft the 6th ray of the adults and the 5th in the young, plus usually 2 or 3 rays more, are filamentose), the anal 3 spiny rays and 8-11 unarmed (the 4th ray is filamentose); the ventral fins have one spiny ray and 5 soft; the pectoral ones count 16 soft rays and soft are also the rays of the robust caudal fin. 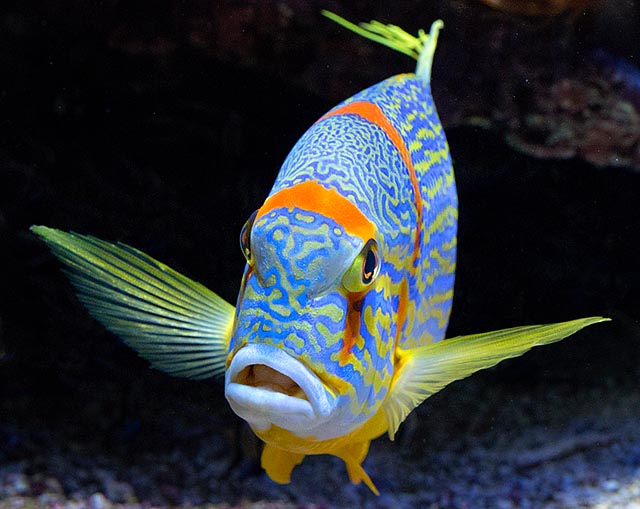 Insatiable eater of fishes and invertebrates, it is not good for home aquaria © Giuseppe Mazza

The livery is truly spectacular. On the golden yellow coloured background catch the eye numerous parallel blue lines, broken perpendicularly by two vertical orange red bands. The first crosses as often happens the eye, camouflaging it, the second falls at the end of the operculum. And in order to better mislead the predators here is, evolutionary speaking, a fake black eye, circled in blue, in the upper part of the caudal peduncle.

Moreover, during the night, it breaks horizontally the body in two parts with an unusual “camouflaged pajamas”: the blue band connecting the eye to the ocellum and the two yellow bands adjacent in fact get darker to disappear in the darkness to guarantee peaceful dreams.

The sailfin snapper is particularly greedy. It gets, friendly, close to the fishes and suddenly swallows them along with the benthic invertebrates it finds in the sand and among the corals; molluscs, annelids and crustaceans that are so unlucky to meet him. It is a solitary fish but during the reproductive period the adults gather in schools along the slopes of the reefs to spawn.

When it runs into the nets, in spite of the splendid livery, it sporadically ends up in the pan. The young are sought for and well paid for the aquarium market, but if it is true that well adapts to the life in captivity, it is good only for the large public aquaria, due to the size and the greediness that rapidly pollutes the water of the small domestic pools.

The resilience of the species, that is the capacity of the units of a certain zone to totally recover in case of catastrophe is of only 1,4-4,4 years, thanks also to the fact that whatever happens the Symphorichthys spilurus is always able to find something to eat. Therefore, nowadays the vulnerability index is luckily fairly low: 39 on a scale of 100.