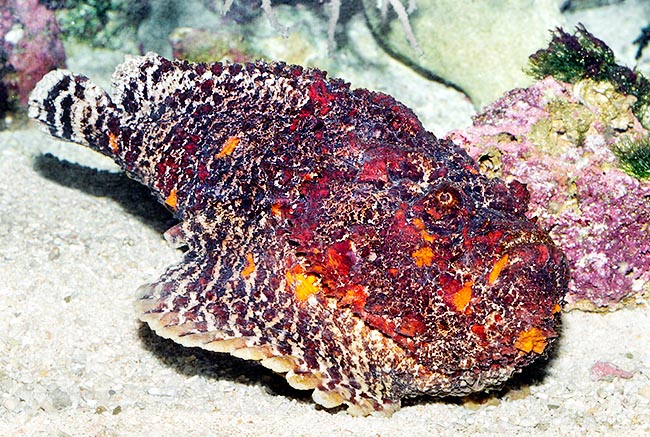 Synanceia verrucosa is the world most venomous fish, fatal for man like a cobra bite © Giuseppe Mazza

The Stonefish (Synanceia verrucosa Bloch & Schneider, 1801) belongs to the class of Actinopterygii, the ray-finned fishes, to the Scorpaeniformes, the order of the scorpionfishes, and to the family of Synanceiidae, which counts a little less than 40 species.

The etymology of the genus comes from “syn-” = with and “aggeon” = pot, with reference to ampoules containing the poison at the base of the 12-14 spines on the dorsal fin.

The name of the species “verrucosa” evokes in Latin the presence of warts.

The Stonefish has a very vast distribution in the tropical waters of the Indian and Pacific oceans.

We find it, indicatively, from South Africa and Madagascar up to the Red Sea and the Arabic Sea, the Seychelles, Mauritius, Réunion and Maldives, in India, Sri Lanka, Thailand, the Andaman Islands, Cocos, Christmas Island, in Australia, Indonesia, Micronesia, New Guinea, Philippines, Taiwan and China, up to the Ryukyu and Ogasawara Islands in southern Japan. Eastward, it has colonized Samoa, Niue, Tonga and French Polynesia with Tahiti. Southward, in the Pacific, Vanuatu, New Caledonia, Cook Island and Queensland.

It lives in shallow waters, camouflaged among rocks and corals, up to 30 m of depth. It does not disdain debris and sandy substrata of the lagoons, where often partly inters, and during the low water it can be found, covered by mimetic weeds, in the rock pools.

It can reach the 40 cm and the weight of 2,4 kg. The body, fusiform towards the tail, is stocky and squat, with the bare skin, studded with warts and protuberances of all sorts. 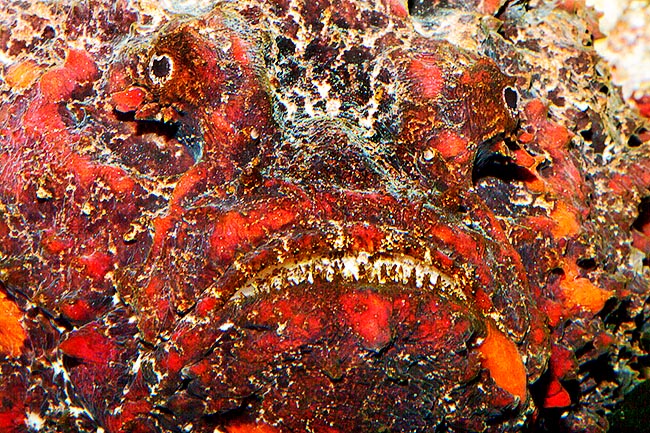 Head close-up. Hard to see the eyes, the nostrils and the huge scaring mouth © Giuseppe Mazza

The colours are changeable and very different depending on the habitat. There is black, grey, green, magenta, red, orange, pink and yellow. Furthermore, it secretes sticky mucus which seizes fragments of corals and seaweeds thus granting a classy touch to the already perfect mimetic livery. The head, wide with short and flattened, with almost vertical profile, carries on top two small protruding eyes, spaced by a depression, standing over the enormous horizontal mouth.

The huge pectoral fins, with 17-19 solid rays, wrap almost all the body. They are covered by small spines, but this is nothing in respect to the surprises reserved by the dorsal fin. Almost always bent, it presents, in fact, 12-14 fleshy protuberances hiding long and solid grooved spines, capable to pierce the sole of a light shoe, and 5-7 soft rays.

The stonefish lives solitary nourishing mainly of fishes. It relies on camouflage and hunts in ambush swallowing, within the fraction of a second, the unfortunate passing through. Eggs and larvae are pelagic.

Present only in the big public aquaria, it is of no interest for the aquaria market and also less the fish one, even if it is often found on sale in Hong Kong live fish market. The vulnerability index of this species is of 58 over 100.