The Syncerus caffer Sparrman, 1779, called also Black buffalo, Caffer buffalo, African buffalo or Cape buffalo, was discovered, studied and described by the Swedish biologist and zoologist Anders Sparrman, one of the highest authorities about the South African fauna and flora, during his repeated trips in such region, which at that time, during the second half of the XVIII century, was called the Black Continent. It is a quadruped placentate (eutherian), herbivore (ruminant) of big size, characterized by a black, short-haired mantle, which has originated one of its many names. The males, usually bigger than the females, can reach at the withers the 180 cm of height, with a weight of 800 kg. As for what the digestive physiology is concerned, it does not draw away from the other specimens of the family of bovids (Bovidae), suborder Ruminantia (see article Artiodactyla).

They stand among the most aggressive African herbivores along with the hippopotamuses (Hippopotamus amphibius). When man gets too close, he is often subject to furious charges, and an adult and healthy male can confront and even compel to the flight even a lion, for defending itself or for protecting the female and the progeny. 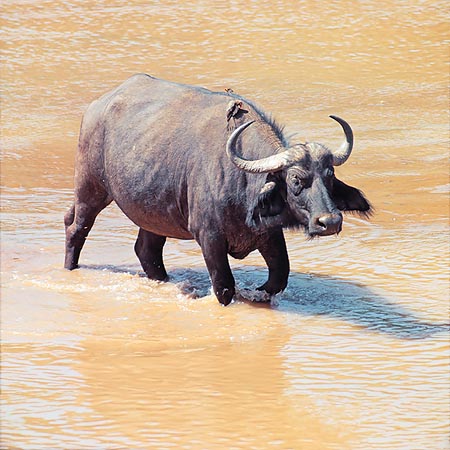 The horns, the biggest of the Bovidae family, are its powerful defensive weapon.

Hollow and not caduceus, with semi-circular section, they can reach a length of 130 cm, and form, joining on the head, a solid plate, a sort of a ‘helmet’ , for protecting the skullcap. They depart from here, bending downwards, for then coming back towards the interior in the acropetal tract (developing from the base upward toward the apex).

It is not astonishing, therefore, that Lions (Panthera leo), Leopards (Panthera pardus) and herds of Hyenas (various species belonging to the family: Hyaenidae, subfamilies: Hyaeninae and Protelinae) try to avoid the dominating males, preying the less reactive specimens, old and sick, or the offspring when far from the mothers. This is a typical function of the predators, useful to the species, after all, as it reduces the alimentary pressure on the habitat. As for them, when in presence of a predator, also the buffalos organize, with a precise and typical scheme of defence.

The youngest males, dominant and strong, form a huge circle around the herd, with tens and tens of warriors, seen that the Syncerus caffer can live even in herds counting more than 400 heads. A sort of first defensive line, for facing even groups of lions or hyenas, with inside a second barrier, concentric, formed by the females of the herd, for protecting the old or weaker specimens, and mainly the progeny, the growing generation to which is entrusted the propagation of the genera and the alleles of the species.

Usually, buffalos live in the savannah, but they can move also in the bush (shrubby area), or in the underbrush, especially the old ones, which tend to have a solitary life, less gregarious than the females and the young males.

In these habitats the temperature can reach even the 50°C in the shade, and so they spend most of the day moving not too much, resting or dozing, possibly immersed in muddy ponds. This is a way for reducing the body temperature, but also the number of hematophagous parasites which might infect them. And also here, as it happens with rhinoceroses, hippopotamuses and water buffalos, a symbiosis sets up, for this purpose, with oxpeckers and cattle egrets.

Usually, buffalos water by the first hours of dawn, or late afternoon, by the sunset, whilst the night is dedicated to grazing and therefore to nutrition. They prefer the fresh grass, but when this is short, they eat also herbaceous plants, shrubs and climbers. 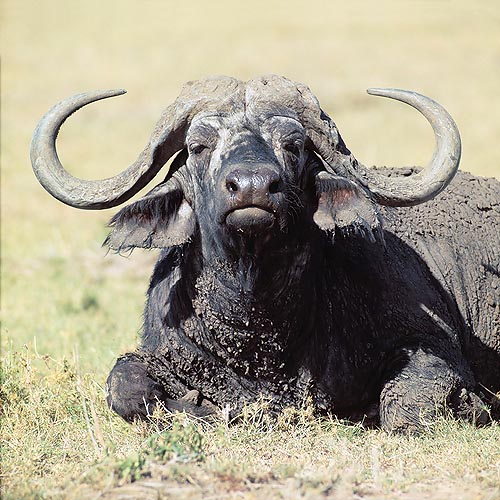 The buffalo horns are a powerful defensive weapon © Giuseppe Mazza

They live in huge herds which, as we have seen, can count more than 400 heads, between elders, adults and sub-adults (not sexually mature) and young specimens belonging to the last two seasons.

Inside these herds, the males can form small isolated groups of 3-4 units, or to live alone, for rejoining the community during the heat season. Other groups are formed by the females with the young.

The sense of dominancy and hierarchy becomes evident by the time of mating, where violent fights can take place between males in heat (excited) for the females in oestrum (heat) chosen also in relation to their pheromone status, which is emitted by the feminine genital organ, the vagina. Once these phases have passed, there are no marked phenomena of dominancy and hierarchy, as it happens for the hippopotamuses and the rhinoceroses.

It is, on the contrary, more evident the cooperation, as described in the defensive mechanisms of the progeny or of a partner, against one or more predators. And even when some specimens, males or females (for the progeny), tend to lead the herd, there are no fights for reaching this position.

Autochthonous of sub-Saharan Africa, in particular of central and southern Africa.

Savannah, bush, semi-woody shrubby zones. Usually, the groups keep close to areas where ponds are present, as the same are utilized for bathing and drinking.

Bulk, quadruped mammal, ruminant herbivore, placentate. The males, bigger than the females, can reach the 180 cm of height at the withers and weigh 800-900 kg. Both males and females have hollow and permanent horns with triangular section (absence of sexual dimorphism), but usually the males’ ones are bigger, and can in exceptional instances as we have seen, reach a length of 130 cm. 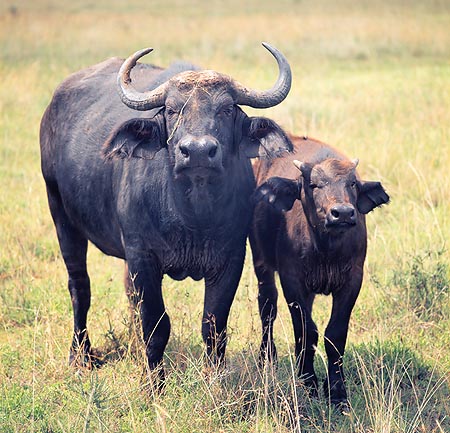 Being Artiodactyls, they have a regression, on the feet, of the first, forth and fifth fingers, whilst the second and third (even number) finger keep functional. The weight of the corporal axis is sustained by them, that is, they are paraxonic (Paraxonia).

The buffalos have a stout skull, with the bare nose covered by a stratum of skin. Small frontal eyes with lid. Ears with wide auricle, placed on the sides of the skull and under the horns.

They are heterodont, that is teeth of different morphology and function) with a strong reduction of the canines and the incisors, strong specialization of the premolars and molars. They have a 40-50 cm long nail, ending in a tuft.

In the females, the uterus is like the other ruminants, bicornuate biconcamerate, the placentation is Sindesmocorial or Cotyledonary. There are no particular months for the mating.

As for Hippopotamus amphibius , also here the rainy season should act as regulator of the biological clock for the coupling. Its end determines, in fact a variation of the local humidity, of the atmospheric pressure and of the length of the period of light/darkness, all phenomena stimulating, as it has been studied and verified in the domesticated species, the ovulation processes in the female, carrying the same in oestrum/heat, and consequently, the male to the excitement for the mating.

The fact that heats happen in this period of the year, has also a precise ecologic meaning: the guarantee that the birth of offspring happens in the next wet season, when there is abundance of food for the mother during the nurturing and for the young when the weaning time comes. The females deliver always one young, after a 10-11 months long pregnancy, and the suckling lasts about 6-8 months, with a progressive weaning.

The Syncerus caffer is unluckily reported on the red list of the Threatened Species of the International Union for Control of Nature (IUCN).