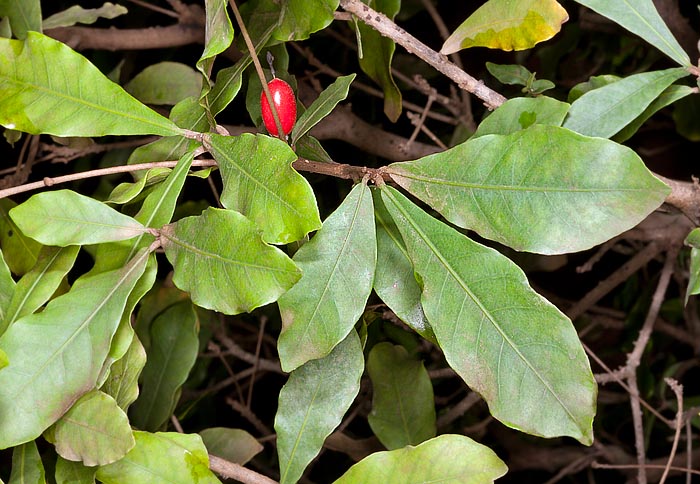 The species is native to central-western tropical Africa (Benin, Cameroon, Central African Republic, Congo, Democratic Republic of the Congo, Gabon, Ghana, Ivory Coast and Nigeria), where it grows in the humid forests at low altitudes, mainly along the banks of the water streams.

The name of the genus is the combination of the Greek preposition “syn” = with, together, and of the Latin term “sepalum” = sepal, with reference to the more than half united sepals; the name of the species is the Latin adjective “dulcificus, a, um” = which sweetens, with obvious reference.

The Synsepalum dulcificum (Schumach. & Thonn.) Daniell (1852) is a much ramified evergreen shrub, 2-5 m tall, with thick conical foliage and leaves grouped at the extremity of the branches, on short petiole, simple and alternate, obovate with entire margin, 10-15 cm long and 3,5-5 cm broad, initially of orange to red colour, then dark green, rather coriaceous.

Hermaphrodite flowers in axillary groups bent downwards, about 1 cm long and of 0,5 cm of diameter, with pubescent funnelform calyx with 5 lobes with rounded apex and 5 petals corolla of cream white when opening, then progressively, reddish brown. The fruits, which remain long time on the plant, are ellipsoid of bright red colour when ripe, about 2 cm long and 1 cm broad, containing only one glossy blackish brown seed, about 1,5 cm long, surrounded by a thin layer of pulp. 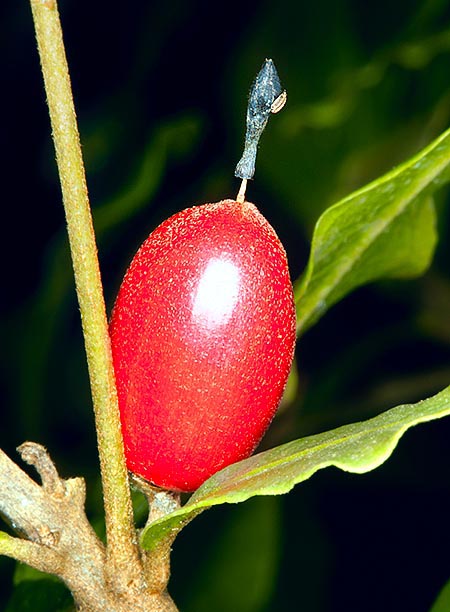 It usually reproduces by seed which should be interred as soon as possible, unless it is kept, for not more than 6 months, in humid sphagnum, quickly losing the germination capability when it dehydrates. The seed is to be placed at 1-2 cm of depth, in peaty acidic soil, with addition of siliceous sand, kept humid; the germination occurs in 2-4 weeks at the temperature of 26-28 °C, lower temperatures prolong the time of germination, the production begins, in the best cultivation conditions, after 3-5 years. It also reproduces by cutting, with a low percentage of rooting.

Slow-growing species that owes its reputation to the particular property of its fruits, but which ha undoubted ornamental characteristics, cultivable in open air in the tropical and humid subtropical climate zones, temperatures around or little less than 0 °C can cause serious damage. It prefers a slightly shaded position, even if adult plants can stand full sun provided not particularly intense, and acidic soil (pH 4,5-5,8), as it does not survive in the alkaline ones, rich of organic substance, perfectly draining and kept humid. The fertilizations, in spring-summer, are to be done with balanced products for acidophilic plants with addition of microelements. It flowers and fructifies almost continuously.

Where the climate does not allow the open air permanence during the whole year, it can be cultivated in pot in soil formed by acidic peat and coarse siliceous sand or perlite, kept humid, but without stagnations, in very luminous position, and with lowest temperatures over the 14 °C; it requires a high atmospheric humidity, are useful nebulisations with not calcareous water if the ambient is rather dry. The presence of chlorine in the water is harmful for the plant, in case, let rest the water for 24 hors before watering.

The pulp of the fruit, by itself almost tasteless, if chewed for some minutes does not produce any effect, but if, after this, in 1-2 hours, we drink liquids or chew acid foods, these ones are perceived as sweet. The responsible of this temporary and partial alteration of the taste is a glycoprotein, which has been called “miraculin”, which in neutral ambient does not have any effect, but in presence of acids affects the receptors present on the tastebuds thus perceiving as sweet the acid substances.

It is not therefore a sweetener, with the side effects that these may have, but it has the same result in the perception of the taste. The pulp of the fruit is to be chewed short time after its harvesting, one day or little more, after which it quickly loses its efficacy, so, it is necessary to have available a plant in fruit, unless using the pulp, lyophilized immediately after the harvest and commercialized in tablets, that has the same action of the fresh fruit.