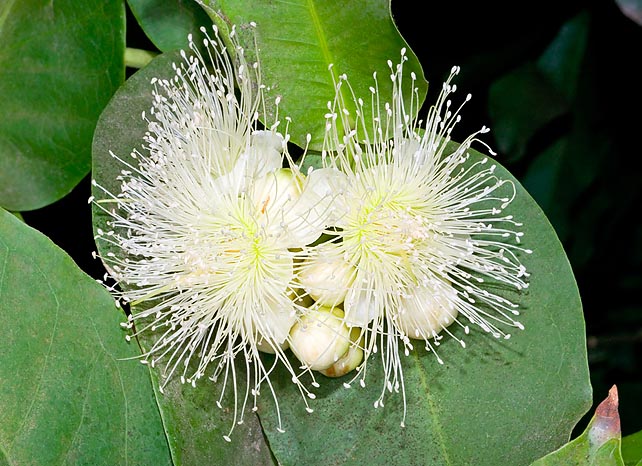 The species is native to tropical Asia (Bangladesh, Indonesia, Malaysia, Myan- mar, Papua New Guinea and Sri Lanka) and to Australia (Queensland), where it lives in the humid tropical forests.

The name of the genus is the combination of the Greek terms “sys” = together and “zygon” = yoke, with reference to the merged petals in some species; the Latin name of the species, “aqueum” = aqueous, refers to the pulp of the fruit.

The Syzygium aqueum (Burm.f.) Alston (1929) is an evergreen, 3-10 m tall tree, ramified until the base, with brown bark, which with the age gets fissured and peels off, and thick and irregular foliage. 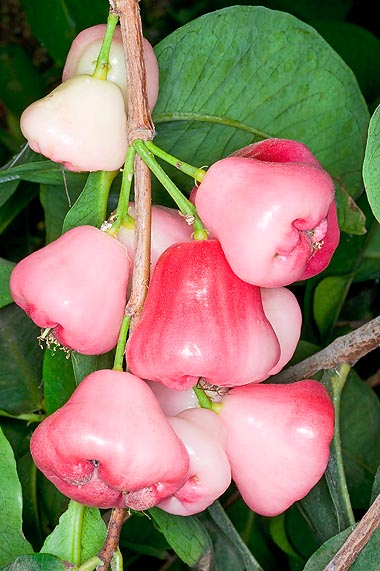 The fruits are piriform or bell-shaped berries © Giuseppe Mazza

The leaves, on short petiole, are opposite, obovate or elliptic-oblong, cordate at the base, 5-22 cm long and 3-10 cm broad, of pale green colour on the upper page, yellowish green below, leathery.

The inflorescences are axillar and terminal, on a short peduncle, carrying 3 to 7 flowers with 4 spatulate petals, about 0,7 cm long, of pale yellow or pinkish colour and several stamina, of the same colour of the petals, up to 2 cm long.

The fruits are piriform or bell-shaped berries, flattened at the two ends, 1,5-2 cm long and 2,5-3,5 cm broad, of white, pink or red, colour, with white or pinkish pulp, crunchy or spongy, aqueous (the water contents in the pulp exceeds the 90%), refreshing, with a light sweetish taste.

The fruits may be seedless or may contain 1 to 6 seeds, most frequently, 1-2. It usually reproduces by seed, which is to be placed in the soil as soon as possible, as its has a very short lasting germination capacity, in sandy and organic substratum, kept humid, at the temperature of 22-24 °C, with the first fructification happening after 3-4 years; air layering and grafting may be also utilized for conserving particular characteristics of the mother plant, such as the absence of seeds.

It is a species for tropical as well as for humid subtropical with rainfall distributed almost uniformly all over the year climate, if cultivated in seasonal climates it needs an input of water during the dry season; it does not bear temperatures close to the 0 °C for prolonged periods.

It requires an exposition in full sun or slight shade and is not particular for what the soil is concerned, being capable to grow in the sandy and light soils as well as in the heavy ones, even with water stagnation; it has a good resistance to the saltiness.

The fruits, rich of vitamin A and C and minerals, are consumed fresh, as they are or in slices in fruit salads, locally, being highly perishable or conserved in syrup or utilized for preparing drinks, ice creams and preserves.

It is often cultivated in the private gardens as ornamental plant but also for its fruits. The wood, reddish, is of good quality and is utilized for tools and handicrafts. 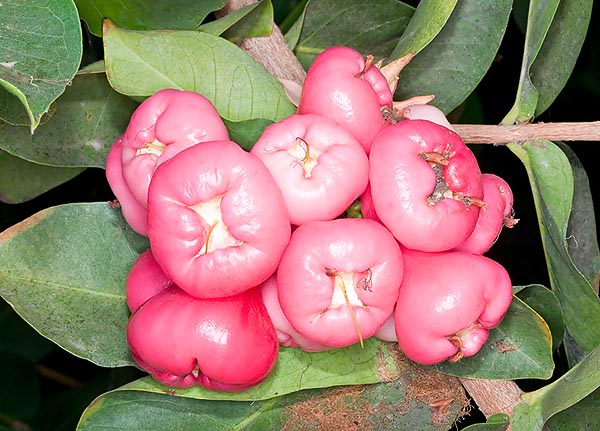 Several parts of the plant are variously utilized in the traditional medicine; laboratory studies have shown promising antioxidant and anti-hyperglycaemic properties.