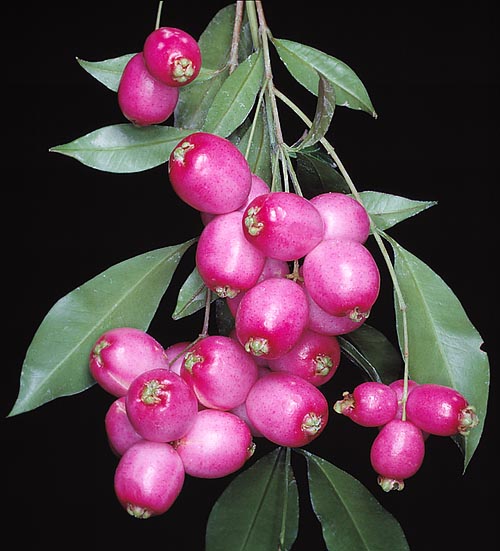 This species is native to Australia (New South Wales), where it grows on mainly sandy soils, in a limited number of specimens, in the subtropical coastal pluvial forests.

The name of the genus is the combination of the Greek terms “sys” = together, and “zygon” = yoke, with reference to the joined petals of some species; the Latin name of the species, “paniculatum” = in the shape of a panicle, refers to the type of inflorescence.

The Syzygium paniculatum Gaertn. (1788) is an evergreen tree, up to about 15 m tall, even if in cultivation usually does not exceed the 8-10 m, with an erect posture and a thick foliage.

The leaves are simple, opposite, from elliptic to obovate with sharp apex, 3-10 cm long and 1,5-3 cm broad, of glossy dark green colour on the upper page, paler below; the young leaves are red-bronze coloured.

It has cymose or panicle terminal inflorescences with flowers with cream white petals, about 5 mm long and several white stamina, 8-15 mm long, which are the most conspicuous part of the flower.

The fruits are globose or ovoid fleshy berries, of 2-2,5 cm of diameter, of magenta, red or purple, colour, rarely white, with a slightly acidulous taste, containing one seed only, usually polyembryonic. It reproduces by branch cutting of the year and by seed, which must be planted as soon as possible, as it has a short lasting germinable capacity, in a substratum with 50% of coarse sand or agri-perlite, kept humid, at a temperature of 20-22 °C; the germination is usually slow.

It is a species cultivable in full sun or in partial shade in the tropical subtropical climate zones and in the warm temperate ones too, where it can resist, without damage, to about -3 °C, and, with loss of the foliage and of the young branches up to -5 °C, for a very short time. It is not particularly demanding about the soil and it may stand periods of dryness, even if it prefers sandy, draining and with almost constant humidity, soils.

Rather than for its fruits, which are consumed fresh or utilized for making preserves, it is employed for ornamental purposes, as isolated specimen or in group, for street trees and for barriers and formal and informal borders, due to the beauty of the foliage and its adaptability for being pruned in various shapes, and for this reason employed also in the topiary art; furthermore, there are dwarf varieties and with variegated leaves. It is often utilized on pot, variously shaped, for the decoration of patios and balconies.

Syzygium paniculatum was last modified: May 4th, 2018 by Giuseppe Mazza