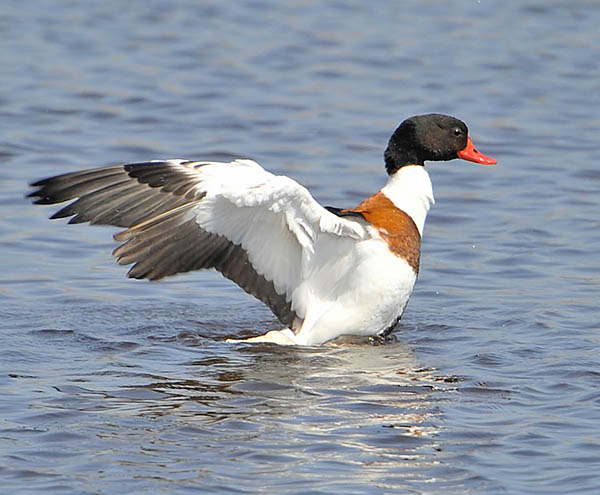 The Common shelduck (Tadorna tadorna Linnaeus 1758) is the nominal species of a group of ducks with a quite homogenous shape and with average dimensions that make it seem a compromise between a duck and a goose. It belongs to the order of the Anserforms (Anseriformes), to the family of the Anatids (Anatidae), to the tribe of the Tadornini, to the genus Tadorna (which includes the ducks called “common shelduck” as well as those called “ruddy shelduck”) and to the species Tadorna tadorna.

The name of the genus and of the species “tadorna” comes from the Latin and means “aquatic dappled bird” and clearly refers to the different colours well separated and neat present in the livery of this gorgeous and extremely elegant duck.

It is a monotypic species with Euro centre-Mediterranean Asian distribution, in expansion in the north-western parts of the range and in contraction in the south-western ones (North Africa, Italy). In the western Palearctic Region, the reproductive area is limited to the coastal zones in the westernmost part. It is more abundant on the coasts of the North Sea and of the Baltic; northwards, it reaches Sweden. It is present on the coasts of China and Japan and nests in the vast basins of Siberia and Asia.

In the Mediterranean the distribution is very fragmented. The Italian reproductive area, with rather regular reported reproductions, is limited to the Valli di Comacchio and to some zones of Sardinia. It is a migrant species, reproducing in the northern zones of its own home range and wintering in the southern ones, as well as sedentary (coasts of Mediterranean and of Middle East). In Germany and in Holland in the protected zone of the Wadden Sea, an internal sea separated from the North Sea by the Frisian Islands, great part of the population (even more than 100.000 specimens) may gather during some periods.

During the reproduction and winter period it frequents almost exclusively brackish lagoons, coastal ponds also temporary, waterways close to the sea, salt flats and sandy dunes, usually keeping within a coastal belt extending for few kilometres. It prefers the open and treeless areas. It nourishes, on the beaches, on the grassy plains and in the cultivated coastal fields. The presence of this species in the hinterland is occasional and connected with the winter period; in these cases the most extended lakes and oxbows are the most frequented. 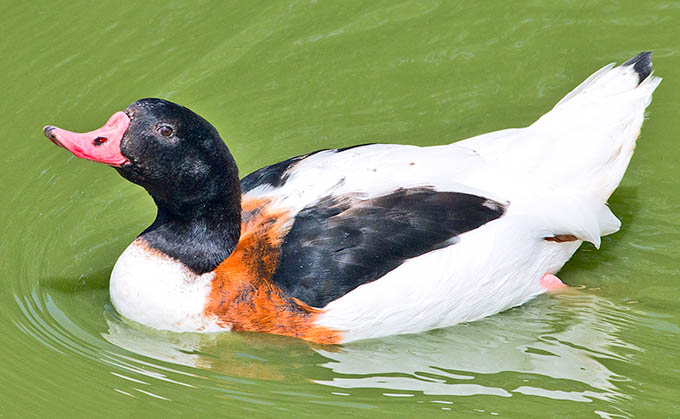 It is an unmistakable duck especially for its characteristic plumage with contrasting colours where the white parts are particularly candid, almost bright; from far away it presents some resemblance with the male of the goosander (Mergus merganser).

It is 55-70 cm long with a wingspan of 110-120 cm and a weight of about 560-1800 g (the males are usually bigger). The sexual dimorphism is little evident, due to the same colouration of the livery, if this is seen from a distance. Actually, some peculiarities of the head (along with the difference of size) allow distinguishing well the sexes to those even little trained in observing the species.

Seasonal and juvenile liveries are little differentiated. In the male the head and the upper part of the neck are black with very dark green shades. There is a wide annular bright brown belt on the upper back and the chest. Dorsally, starting from the brown annular belt, the scapular feathers are black and form two thick parallel lines (separated by the white of the back) that stretch for all the base of “attachment to the trunk” of the wing. Base of the neck, back, rump and abdomen (in the lateral parts) are white strongly contrasting with the other colours clearly separated and darker.

From the brown belt and “cutting” the same ventrally, a wide central black-blackish line starts slightly widening between the legs and ending about at the level of the cloaca. This dark line forms (together with the brown line) a sort of T, evident when the bird if flying. At the side of the black ventral belt the rest of the abdomen and the sides of the body are, as we said, white. The wing has black remiges (with base of the feather more or less white), seen from below, forming an ample black border extending abundantly-totally towards the tip of the wing, the rest of the under-wing is white. The secondary dorsal remiges, going in proximal-distal direction, form a speculum initially dark brown (a little darker than that of the annular belt and which starts with a black small line) and, in succession, iridescent green (with purplish reflections). The brown and the green of the secondary remiges interests the outer barb and, partly, the inner one (for those with the green), the rest is white (can be seen only opening the wings). The great dorsal coverts of the wing are black; the feathers of the alula are white amply marginated of black, more on the inner barb. The primary remiges are black also dorsally. The lower coverts are white.

The flight feathers are white with terminal border black; the feathers of the rump are white. The under-tail is pale brown, more yellowish than the brown of the annular belt; it continues where ends the black ventral line with which limits the perianal zone, shaded of pale.

In the female, the under-tail, pale brown, is even paler than in the male. The beak is of a nice very lively red colour and has a shape typical of the species: much developed in height, a pronounced concavity of the upper rhamphotheca (which, in some way, reminds the beak of Walt Disney’s “Donald Duck”, conferring a cute look to this duck) and shows a prominent fleshy tubercle at the base of the beak itself, dorsal and continuing without interruption of the same bright colouration of the beak. The upper rhamphotheca, equipped with several dark denticles, protrudes with respect to the lower, which appears more recessed.

The protruding part of the upper rhamphotheca, laterally-apically, has morbid and fleshy consistency. The nail of the beak and the nostrils, with the zone close to them, are black. It is precisely the lump, always present but more developed during the mating season that allows distinguishing the male from the female which doesn’t have it. The tarsi and the webbed feet have flesh-pink colour and black nails. The iris is dark chocolate-black. In the female the livery is similar to that of the male with usually slightly duller hues. The head of the female, besides having no tubercle and even if having the beak of the same shape than the male, can have also a thin, at times partial, white periocular ring. Sometimes, in the head of the female are also present whitish spots close to the beak.

The eclipse livery is quite different from the nuptial one; it has duller tonalities with the differently coloured belts clearly delimited. The colouration of the beak is less bright; the frontal tubercle of the male is reduced and there is a presence of white feathers in the frontal region close to the attachment of the beak. The juvenile has grey-brown head, mantle and neck with vast white portions on the front, face, throat recalling the colouration of the duckling. The lower parts are whitish and there is no light brown belt on the chest. In the young, the beak is pale pink and the tubercle is absent in the young males. The legs are of whitish-fleshy-pink colour.

It is a generally gregarious species during the migration, the wintering and the post-reproducing period. It turns monogamous and territorial during the reproductive period (from the courting up to the breeding of the pullets). 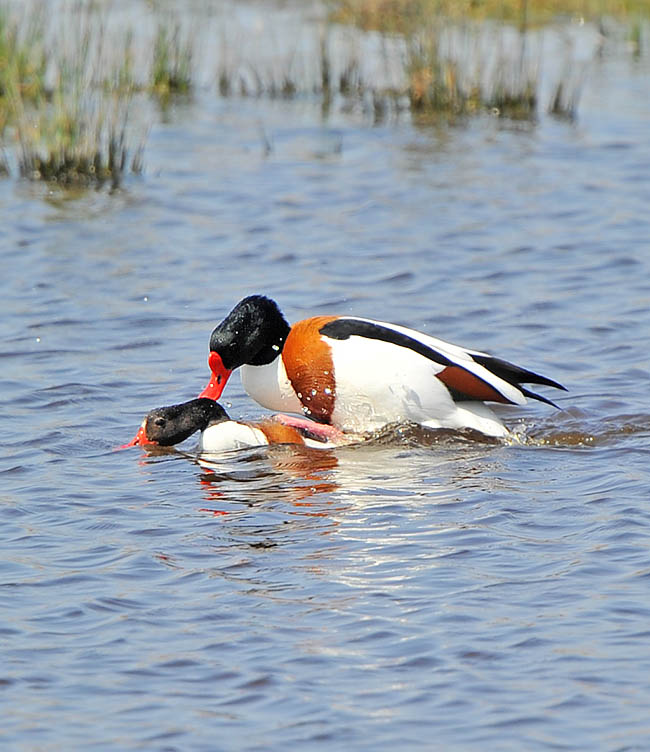 Mating happens in water. The nest can be a fox den, since the Italian name volpoca © Gianfranco Colombo

The common shelduck nourishes mainly of invertebrates, particularly of molluscs and aquatic crustaceans, of eggs of fishes, and small fishes. With the beak, it sieves the mud looking for snails (genus Hydrobia which are often its main food), shrimps, clams (genus Macoma) and sea worms (order Aciculata). It eats also vegetables, such as seaweeds, seeds and cultivated vegetables, especially during the winter. The vocalizations are different in the two sexes, are rarely emitted but more frequently during the period “spanning” the formation of the pairs. The vocalizations “of contact” between the two members of the pair are frequent. The cries more emitted are fast, nasal and dry “ak-ak-ak” and harsh-noisy “ark-ark”. Particular is also the position assumed in water with the S-bent neck. It usually flies in lined or irregular formations. The nidification usually takes place in May (April-June).

The nest is built in the thick of the halophilic vegetation of the dunes or, more frequently, in cavities and holes of gassy further dug banks and adapted by the reproductive pairs.

For such purpose, are often utilized the dens of the wild rabbits (Oryctolagus cuniculus), those of mustelids (family Mustelidae) and foxes (Vulpes vulpes). From this comes the Italian name of “volpoca”, which means “volpe-oca” = “fox-goose”. The eggs are of translucent white-cream colour with smooth shell. Only one breed is spawned each year, formed, as an average, by 8-13 eggs, which may be replaced if lost during the natal phases of deposition-hatching. The pullet has a contrasted white-black livery.

The black is present dorsally from the front and continues with an ample central stripe passing from the vertex of the head, continuing on the neck, the back and reaching the tail; a small, dark, auricular spot is present. The black is present also with two spots-line present on the sides in front and behind the wing; its interrupts the black with its white edge. The other parts, lateral and ventral, are white. Almost always present is a white spot over the eye, the iris is brown, the beak and the legs are grey. The ducklings are precocious and nidifugous; the hatching is synchronous (as often is the case in the avian species with precocious progeny) beginning the brooding once the deposition is finished.

The incubation lasts about 28-30 days and the pullets of different broodings, even of different ages (among the various broodings), may merge in groups (crèches or nurseries) formed even by some tens of individuals. In this case, only few adults watch and accompany the newly formed great brooding. Single broodings or “crèches” can be accompanied by parents plus other adults (which have not been able to reproduce) and who act as nurses. The age of the take off is reached when about 45-50 days old. The sexual maturity is reached when two years old even if a certain number of specimens, especially males, cannot reproduce before the age of 3-5 years. The shelduck does one complete post-reproductive moult (both males and females) between June and July; one partial pre-reproductive between September and December; one partial post-juvenile among late July-early October. The estimated world population is of about 500.000-700.000 specimens. Some threats for this species come from the tidal barrages and the inconsiderate introduction of the American mink (Neovison vison).