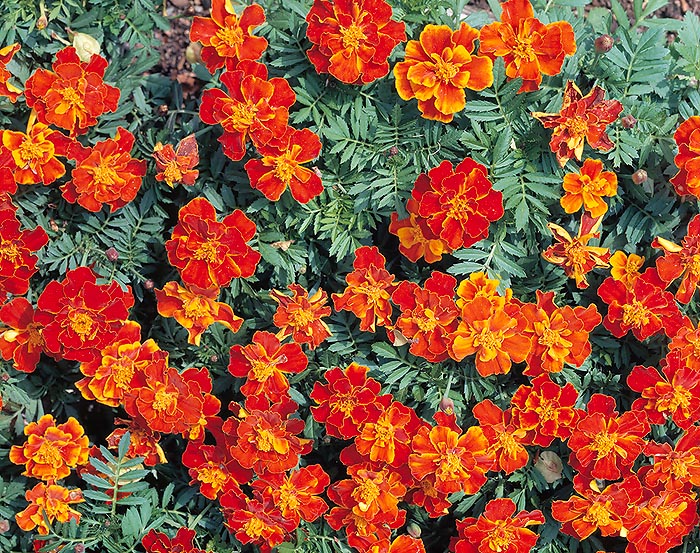 The Tagetes patula is an easy plant, also by seed, for balconies and gardens. Ideal for beginners © Giuseppe Mazza

The plant is native to Mexico (states of Aguascalientes, Duran- go, Guanajuato, Hidalgo, Jalisco, Mexico, Michoacán, Queretaro, Zacatecas), and Nicaragua, where it grows in zones characterized by warm and little rainy climate.

The origin of the name of the genus is not known, after some it should come from “Tages, -getis”, character of the Etruscan Mytho- logy; the Latin name of the species, “patula” = broad, ample, refers to the tendency the plant has to form, while ramifying, wide and compact tufts.

The Tagetes patula L. (1753) is an annual herbaceous plant, 15-50 cm tall with tap root and much ramified stems, up to the base, forming a broad and compact bush; it has 5-10 cm long, dark green, leaves, opposite in the lower part, alternate in the upper one, deeply indented, so much that they appear imparipinnate, with 1-3 cm long, ovate-lanceolate segments, with notched margins, equipped with oil glands that, when touched, release a pungent odour. The terminal, usually single, inflorescences, of 3-5 cm of diameter on a 4-8 cm long peduncle, are the typical flower heads of the Asteraceae formed by a host of sessile flowers spirally inserted on a roundish base, the receptacle, surrounded by a cylindrical involucre, 1-1,5 cm long and about 0,6 cm of diameter, with dentate upper margin, formed by a single series of united bracts.

The flowers of the outer ring, called ray florets, in number of 5-8 (even a hundred in the double flower varieties), have the obovate, 0,8-1,5 cm long, corolla, velvety on the upper part, formed by five united petals, of orange yellow colour, spotted or striated of dark red, colour that, in some instances, may extend to almost all the surface, variously coloured of scarlet, red, mahogany red, yellow, orange and pink in the countless cultivated varieties. 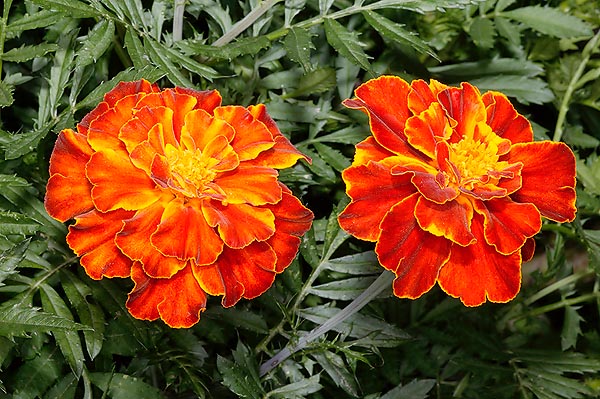 The ray florets are female, but have especially the function of attracting the attention of the pollinator, like the petals of a single flower. Inside the ring, are 50-100 bisexual flowers, called disc florets, with five-lobed tubulous corolla, about 0,6 cm long, of yellow or orange colour.

The fruits, containing one seed only, and called achenes (or, more precisely, cypselae), in the Asteraceae, are thin, about 0,6 cm long, of black colour, surmounted by the pappus, the modified calyx of the flower with the function to help their dispersion, formed by scales, one of which pointed, 0,6-0,7 cm long, and the others distinct or united at the base, oblong or linear, 0,2-0,4 cm long.

It easily reproduces by seed, germinating on an average of 10 days at the temperature of 18-20° C. Sowing must be done by late winter in sheltered location, placing the seed in the soil at a depth of 0,5-1 cm, or directly in place in spring; the flowering begins in June-July, depending on the time of sowing and the climate, and lasts until late autumn. It easily self-disseminates so much to become a pest in some cases. Introduced in Spain by the middle of the XVI century, has spread in France before and later in Great Britain (from which the common name of “French marigold” under which it is known in the English-speaking countries), and in the remainder of Europe and USA. Together with the Tagetes erecta, is one of the annual flower plants most easy to cultivate, very popular in particular from the ‘800 until the second half of the ‘900, excellent for those who begin to get fond of gardening.

It adapts to whatever type of soil, even if poor, but with a preference for the clayey, light and drained ones, in full sun or with at least six daily hours of insulation; it may be cultivated in all climates, excepting, of course, the polar ones, being an annual plant, but the best results are gotten in the temperate climates, the high temperatures, in fact, slow down the vegetation and influence negatively the flowering. The low and compact standing, the abundance of flowers with warm tonality, the duration of blooming and the availability of varieties with different combinations of colour, offer countless possibilities of utilization in gardens of any dimension, in edges, rock gardens, flower beds or as soil cover. When in pots or in cages, even hanging, is a plant not to be underestimated for decorating balconies, terraces or verandas. 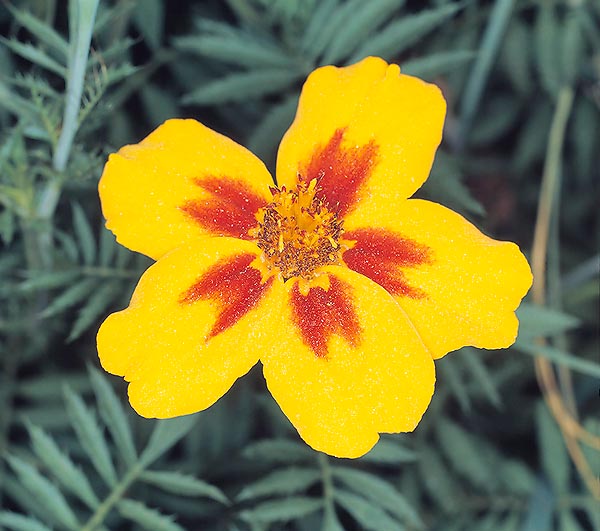 Very varied colour and number of petals. We may meet big surprises when starting from seeds © Mazza

Summer watering, when necessary, are to be regular, but allowing the soil to dry up before irrigating again, as it is a plant quite resistant to the dry, but rather sensitive to radical rottenness caused by stagnating humidity. As when starting from the seed we are never sure about the colour, and keeping in mind that the modern varieties are the outcome of selections and crossings, if we wish to realize particular chromatic combinations in a garden, it is better to effect the sowing in a seedbed or in cages and transplant, operation well tolerated by the plant, after the opening of the first flower.

The active principles contained into the various parts of the plant are practically the same as for the Tagetes erecta, to which please refer, as well as the utilizations in the alimentary, pharmaceutical and cosmetics industries. The plant has the same nematocidal power of the roots, due to the toxins (thiophenes) contained there, and repellent towards many pests, in particular Callosobruchus maculatus and Trichoplusia ni, due to the odour released by the oil glands. The oil extracted from the flower heads has been shown to have also a good antifungal activity towards Botrytis cinerea, Fusarium solani and Penicillium digitatum.

Tagetes patula was last modified: May 4th, 2018 by Giuseppe Mazza