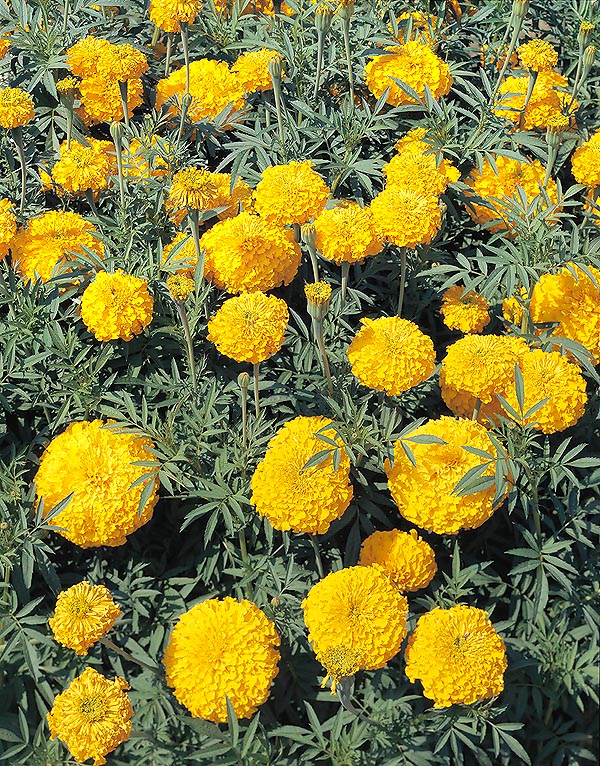 Even 120 cm tall, has decorated gardens for centuries. No more in fashion, is now in the limelight © Mazza

The origin of the name of the genus is not known, after some it should come from “Tages, -getis”, character of the Etruscan mythology; the Latin name of the species, “erecta” = erect, refers to the standing of the plant.

The Tagetes erecta L. (1753) is an annual herbaceous plant, 10 to 120 cm tall, with erect stems little ramified, glabrous, and dark green leaves, opposite in the lower part, alternate in the upper one, spotted of translucent oil glands that emit a pungent odour.

The leaves are pinnate-compound, 3 to 20 cm long, with 9-20 linear to lanceolate small leaves, 1-3 cm long and 0,3-1,5 cm broad, with sharp apices and indented margins. The terminal inflorescences, usually single, have a diameter of 5-12 cm on a 3-12 cm long peduncle, and are the typical flower heads of the Asteraceae, formed by a crowd of sessile flowers spirally inserted on a roundish base, the receptacle, surrounded by a bell-shaped involucre, 1-2,5 cm long and 0,5-1,5 cm broad, formed by a series of joined together bracts and covered, each one, by two rows of glands.

The flowers of the outer ring, called ray florets, in number of 5-8 (even up to a hundred in the double flower varieties), are female with obovate corolla, 1-2,5 cm long and 1-2 cm broad, formed by five petals joined together of an intense yellow colour in the wild, and also from orange to brown-red and in some instances bicolour, yellow and brown-red, in the countless cultivated varieties. Inside the ring are 50-120 bisexual flowers, called disc florets, with tubular, five-lobed, corolla, about 1 cm long, and of yellow or orange colour. The fruits, containing one seed only and called achenes (or, more precisely, cypselae) in the Asteraceae, are thin, 0,6-1 cm long, black coloured, surmounted by the pappus, the modified calyx of the flower, formed by 1-2 pointed scales long 0,6-1,2 cm and by 2-4 scales, distinct or united at the base, oblong or linear, 0,2-0,6 cm long.

It easily reproduces by seed, which germinates in one week on average, at the temperature of 18-22 °C; the blooming begins after about three months and lasts until late autumn. It may reproduce also by apical cutting to be placed for rooting in sand or agri-perlite, but this is a method utilized only when it is wished to keep a particular variety, in fact from the seed there is never the certainty that all the characteristics of the mother plant will be maintained. Introduced in Spain by the mid of the XVI century, it has spread before in North Africa, naturalizing, and from there in Europe and in USA (from this comes one of the most utilized names), besides southern America, meeting immediately a great success due to the facility of cultivation and the brilliant colour of its flowers, quite soon not confined to the yellow colour, thanks to an intense variety selection which has led also to the obtaining of double and extra-double flowers and plants of various heights. 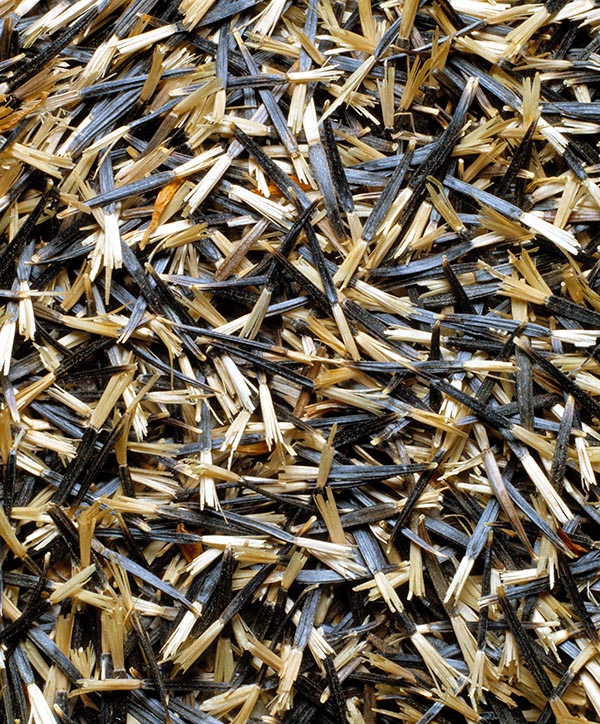 For centuries, its varieties have been a constant presence in the gardens, only during the last two decades of the past century it has met a drop in popularity due to the massive availability of new ornamental species, but recently it looks like that there is a renewed interest.

It adapts to whatever type of soil, even if it prefers the clayey, light and drained ones, in full sun or with at least a sunshine duration longer than six hours per day; it may be cultivated in all climates, excepting, of course, the polar ones, being an annual species, but the best results are gotten in the temperate climates; the high temperatures, in fact, stop the vegetation and adversely affect the flowering.

The availability of varieties of different height, dwarf, semi-dwarf and tall, offers countless utilization possibilities in the gardens; the dwarf varieties are furthermore particularly suitable for the cultivation in pot or in cages. The watering in summer, where required, must be regular, but the soil is to be left to dry up before watering again, as it is a plant quite resistant to the dry, but rather sensitive to the radical rottenness due to stagnating water. It has finally a good resistance to the diseases; attacks by fungi (Botrytis) may occur in the wet climates and among the most frequent parasites stand the mites (the classical “spider mite”). The contact with the leaves may originate dermatitis in the most sensitive subjects.

Besides being an ornamental plant, the Tagetes erecta is a species with a remarkable economic importance, from its flowers they get a food colouring, which may be obtained from the exsiccated and pulverized flowers or by extraction with a solvent; this colouring is added, for instance, to the poultry food in order to intensify the colour of the skin and of the yolk. The essential oil derived from the plant, is utilized, in traces, in several aliments as flavouring and as flavour enhancer, and in the cosmetics industry. But the most economically important component derived from the flowers is the lutein, a carotenoid pigment of which this plant is the main source and of which are known the antioxidant properties and protective of the eyesight. The lutein is utilized in the pharmaceutical industry and added in many food supplements, this substance, which concentrates in the macula, the central zone of the retina, is not synthesized by the human body and therefore must be acquired through the food containing the same. The main producer of Tagetes is Mexico, but the plant is amply cultivated also in Africa and in South America.

Another utilization of the Tagetes erecta (as well as of the Tagetes patula) is as natural pesticide, particularly effective against the nematodes infesting the soil and causing serious damages to the agriculture; to intercalate a cultivation of marigolds may cut down the nematodes population of more than the 90%. In fact, the roots exude a substance attracting various species of nematodes that, once penetrated, are killed by the sulphur based toxins (tiophenes) with nematocidal action contained by them. At times, rows of marigolds are alternated with the plants being cultivated, besides the aforementioned reasons, also for the quite good repellent power, against many parasites, of the odour emitted by the oil glands.

Finally, the plant, cultivated since remote ages, has played in the origin countries, and still does so, an important role not only in the traditional medicine, but also in the religious ceremonies and in the most important and in the most important occasions of life. In fact, the Aztecs utilized it for several pathologies, fever, dysenteries, indigestion, etc. and on ulcers and eczemas; it seems that it had also an important role in the human sacrifices. Many common names refer to various customs related to the cult of the dead; in Mexico, for instance, they have the habit to decorate with these flowers the tombs on Nov. 2nd, commemoration day of the dead, but it is not a utilization limited to this day, this flower, in fact, is present in all the most important moments of the life, starting from the birth.

Tagetes erecta was last modified: May 4th, 2018 by Giuseppe Mazza