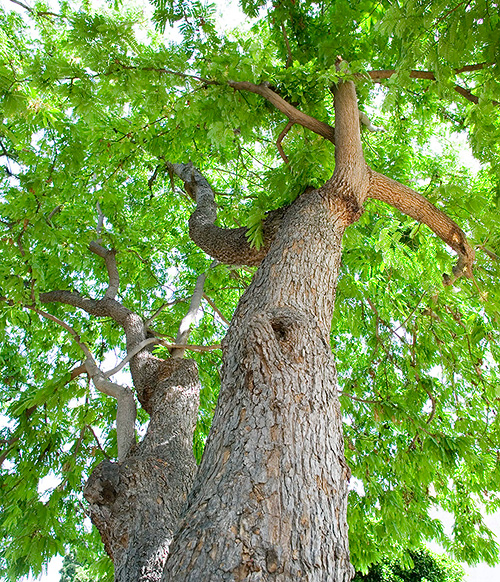 It grows in the semi-arid savannahs and also in the humid tropical climate zones, but with a long dry season, which is necessary for the fructification.

The name of the genus comes from the Arabic “tamar hindi” = Indian date; the Latin name of the species “indica” = of India, refers to the presumed place of origin.

The Tamarindus indica L. (1753) is an evergreen tree, semi-deciduous in the particularly arid climates or seasons, much ramified, up to 25 m tall in the oldest specimens, with a short and massive trunk with a diameter usually reaching the 50 cm, but which may even exceed the metre, with dark grey bark fissured longitudinally; when the branches and the bark are cut or damaged, a red blood coloured gum exudates from them.

The pale green leaves are alternate, paripinnate, with 10 to 20 oblong leaflets of 1-2,5 cm of length and 0,5-1 cm of breadth, which close during the night hours.

The inflorescences are terminal or axillar racemes, 5-12 cm long, with 10-15 flowers with four sepals (five, two of which are merged together), pink at the beginning, then white, retroflexed after opening, three obovate upper petals, 1-1,5 cm long, of a yellowish colour with purple red venations, and 2 lower ones reduced to scales.

The fruit is a brownish, slightly flattened, pod, curved at times, 5-18 cm long and 2-2,5 cm broad, containing up to 12 seeds, almost quadrangular, of a dark brown to glossy blackish colour. 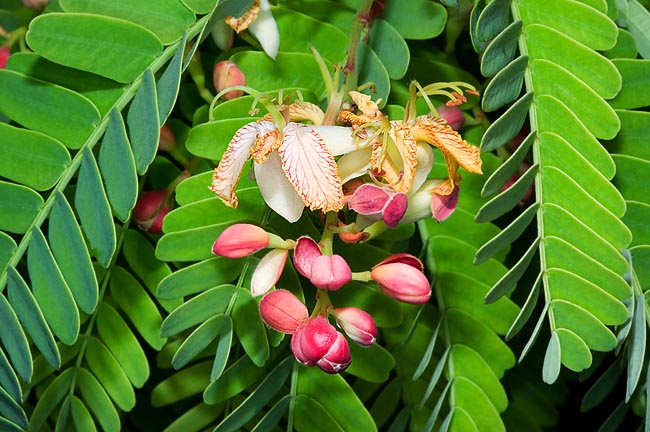 The inflorescence has even 15 flowers of 1-1,5 cm. The paripinnate alternate leaves close by night © G. Mazza

The pulp surrounding the seeds, of brown colour, has an acidulous taste due to the presence of tartaric acid (8-10%) and citric acid.

It usually reproduces by seed, previously kept in water for 48 hours, which germinates in one, two weeks; it may be reproduced also by cutting and by air layering, especially when we wish to maintain a particular variety.

Tree of great economical importance due to the alimentary properties of the leaves and the fruits, and ecological, widely spread in the tropical regions as well as in the semi-arid or humid subtropical ones, provided they have a marked seasonality, as it requires 4-5 months of dryness for the fructification.

Apart from all other uses, it has also a remarkable ornamental value for its foliage and for the blooming; for this reason it is utilized as shade tree in parks and vast gardens and as a street tree.

It requires full sun and adapts to an ample variety of soils, provided the same are well drained, furthermore, it resists quite well to the saltiness and therefore may be cultivated along the coasts. Young plants may get damages by temperatures close to the 0 °C, adult ones are reported as having resisted to almost -4 °C for a short time.

It resists to the wind, thanks to a strong and deep radical apparatus, the robust branches and the thick foliage; it is therefore utilized for realizing effective windbreak barriers. 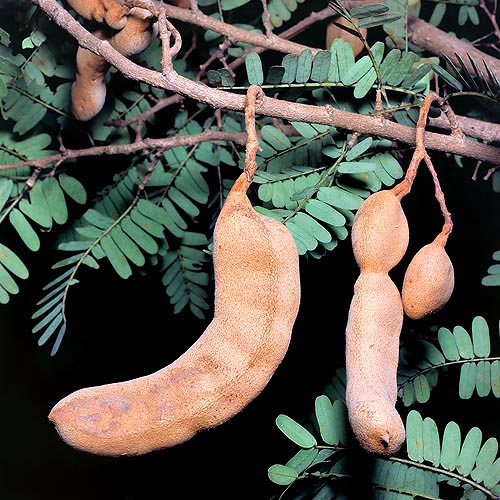 The fruit, rich in vitamin C, is a 5-18 cm brownish pod © Giuseppe Mazza

It can be utilized against the erosion and for fighting the desertification, finally, being capable, like the other leguminous plants, of fixing the atmospheric nitrogen, thus enriching the soil and consequently its fertility.

The seeds contain about the 3% of proteins and may represent an available and cheap contribution for reducing the lack of adequate nutrition in the developing countries. The oil extracted from the fruits and the seeds is edible and is variously utilized, the fruits and the young leaves are added to many dishes, in particular in the Indian cuisine and in that of the south-eastern Asian one.

The acidulous pulp, rich of vitamin C (44 mg per 100 g) and for this reason used in the past as anti-scurvy, may be eaten fresh, with addition of sugar, or used as additive in foods, to which it confers a special taste, or for preparing syrups, preserves and refreshing drinks.

The various parts of the plant are amply utilized in the traditional medicine for countless uses, but also in the pharmaceutical industry.

The pale yellow wood, very hard, is utilized in building and in realizing facilities as well as handicrafts, locally is employed as fuel. The leaves and the flowers are utilized in the textile industry for fixing the colours; finally, the leaves are utilized as forage for the livestock and for the silkworm.