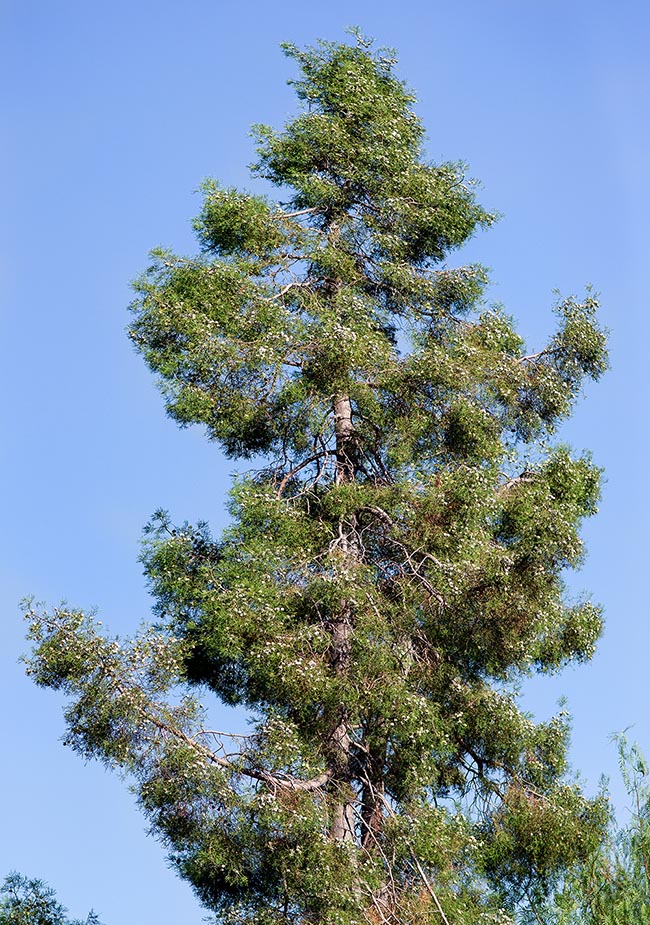 Tetraclinis articulata. Habit of an adult tree. It can reach the 15 m of height © Giuseppe Mazza

Tetraclinis articulata (Vahl) Mast.(1893), the arartree ( “Thuja de Barbarie” or “Cyprès de l’Atlas” in French, “tuya articulada” and “alerce” in Spanish, “arar” or “arartree” in English , sandarac tree in Malta ) is a species of conifer in the family Cupressaceae (Gray, 1822).

Until the end of the XX century this family was merged into the Pinales (Gorozh., 1895), order which included all the species commonly referred to as «Conifers»; Cupressaceae in turn were subdivided into the two subfamilies Cupressoideae and Callitroideae which, in addition to morphological differences, were characterized by a distinct geographic distribution: the first are native in the northern hemisphere, the second are vicariant in the southern.

Studies carried out starting from the second half of the last century have more and more evidenced that the species of this family had close similarities for several character, especially with regard to the development of the cone scale, with those of Taxodiaceae (coastal, sierra and dawn redwood, Japanese cedar, baldcypress and so on).

These results have led to the proposal, then accepted, to include the species of the latter family within Cupressaceae.

On the basis of these analyses a new infrafamilial classification has been constructed.

Cupressaceae are now divided into seven subfamilies, five include the ex-Taxodiaceae and the other two subfamilies, Cupressoideae and Callitroideae, wich constituted the former Cupressaceae, have been preserved in the new family.

The only exception was Sciadopitys Siebold & Zucc., a genus formerly included within Taxodiaceae, wich being genetically distinct from all Cupressaceae, is now comprise in the new family of Sciadopityaceae.

The oldest remains of Cupressaceae date back to the middle of the Jurassic period (170-165 million years ago).

Before these drastic changes inside the Cupressaceae, Tetraclinis articulata was included into the subfamily Callitroideae in which, however, it was an “involuntary” exception because, as already mentioned, the Callitroideae are exclusive to the southern hemisphere and T. articulata was the only taxon of this subfamily present in the northern hemisphere. The close homology of the walls of its woody vessels with those of several Cupressoideae has made necessary to move the genus Tetraclinis to the latter subfamily, thus also eliminating the ‘chorological anomaly’ just mentioned.

Compared to the other conifers, Cupressoideae and Callitroideae have the seed-cones formed by closely set of two or more decussate pairs of scales (arranged in opposite pairs and rotated so that each pair is inserted at right angles to the the previous and the following pair); only in the junipers the scales are fleshy and carried in verticils of 3. Each scale is adnate (selded) with the corresponding covering bract and carries from (1) 2 up to 20 seeds (the Pinales have 2 seeds per scale); seed-cone has a globose or largely conical shape reaching at most, in the Italian cypress, at 3-4 cm of length. In almost all species, the seed has a pair of isomorphic wings derived from the teguments. 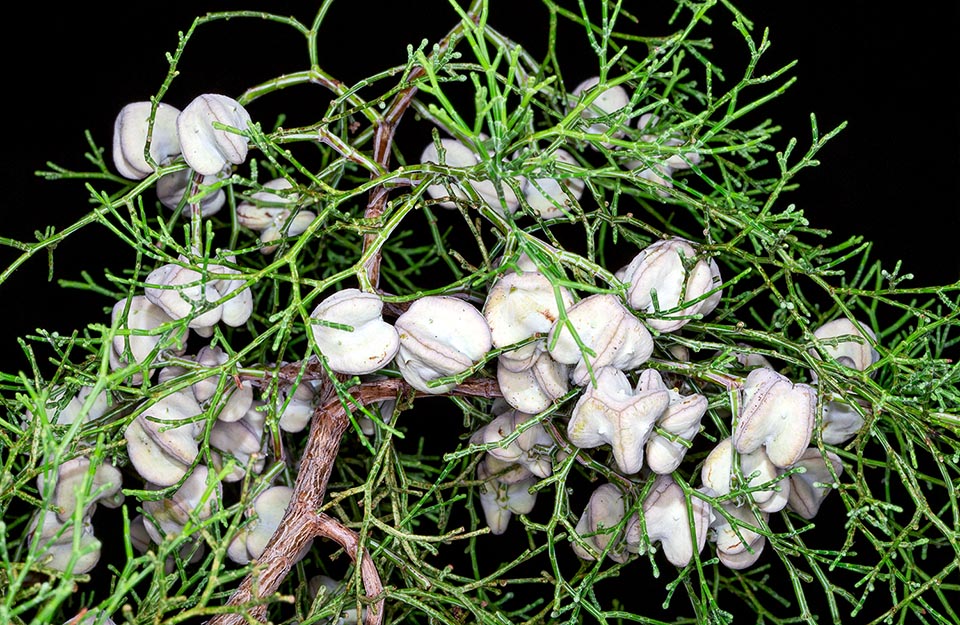 Detail of Tetraclinis articulata, on the branchlets can be observed the single ‘articles’, that have given name to the species, as well as several cones, glaucescent because covered by abundant waxes allowing to better control water losses. The cones are numerous and close to each other because, though ripening in 8-12 months, they stay closed at times for several years on the plant (serotine cones). With cypresses, arborvitae, junipers, swamp cypress and sequoias, also this species belongs to Cupressaceae © Giuseppe Mazza

Another character that most of the genera have in common are the scale-leaves which are small, clearly double-sided, and adhered to the branchlet on which they are directly connected without apparent morphoanatomical distinctions between the branchlet and the leaf. Lacking an abscission layer, at their death the leaves usually are persisting on the branch for 3-5(-12) years until this last shed or, having grown, tears the same leaves.

T. articulata is the only species of the genus Tetraclinis Mast. Large shrub or fairly long-lived small (even if the informations are rather scarce, it is believed that it may exceed four hundred years); as a treee it is more or less polycormic reaching a height of about fifteen meters with a diameter of up to 50 cm and with a trunk thick, stocky and twisted; the crown is initially conical then widens until it becomes irregularly globose; the rhytidome (the outermost bark) are reddish then becomes grey from light to dark fissuring in thin longitudinal plates. Branchlets first are dorsiventrally flattened then thicken up to become almost cylindrical; they are flexible and articulated in segments (hence the specific epithet). Each segment is 2-8 mm long and easily recognizable; it is “covered” by four scale-like leaves, in decussate pairs, appressed in a whorl-like; they are 1 to 8 (10) mm long and about 1 mm broad; only the apex, widely triangular in the two dorsiventral leaves, is free and provided with resinous glands.

The rooting apparatus is amply ramified and also much expanded for which roots can also surface. 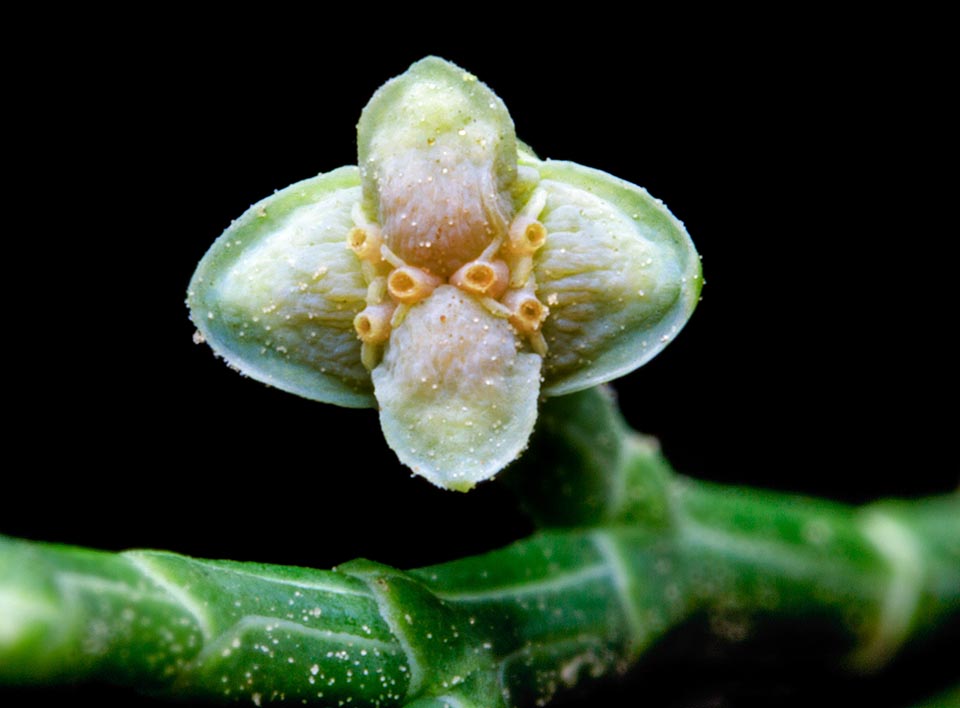 Female cone formed by two pairs of ovuliferous scales, opposite and decussate. In photo, the small cone has begun to get the pollen grains (seen on the scales surface and on the articles under) and has the micropyles of the 6 ovules open. The small cone is carried on short peduncle and, under, we see some articles © Giuseppe Mazza

The wood has a narrow sapwood, white with yellowish shades whilst the duramen is compact, without intercellular spaces or resin ducts, and it has generally an orangish color becoming dark reddish brown with the age; the annual rings are thin but very discernible, the veins are very fine. The superficial roots and the stumps repeatedly coppiced can grow considerably and in that case a woody tissue can be formed with an abnormal structure due to the presence of large dark spots and to a marked irregularity in the pattern of veins mainly caused by the formation of knots of buds; the causes are due to fires, to pasture and to the wounds caused by repeated pruning and yielding. These large burls are commonly found in several other species, as walnut, maple, elm, black poplar, tree heather, etc.; when spots and veins create some particular drawings, it becomes very valuable.

The species is monoecious and the pollination, by wind, occurs from February but 8-12 more months are needed for the seed to be ripe.

Male cones are small (2-4 mm) and they consist of 8-12 microsporophylls, each with 4-5 microsporangia (functionally corresponding to the pollen sacs of the angiosperms); these cones are solitary but aggregated in small groups.

Female cones are globose with a diameter of about 10 mm; they are formed by two decussate pairs of concave scales that carry up to 6 ovules in total: ‘Tetraclinis’ means “four” (‘τετρα-’) and “couch” (‘κλινίς’)” with clear reference to the two pairs of scales of cone. The seed cone, when it is ripe, resembles in shape and size a polygonal hazelnut; it has lignified and thickened scales that become glauco-milky due to the quantity of waxes of which they cover (adaptation to the arid environments). Seed-cones can be serotine for a long time. 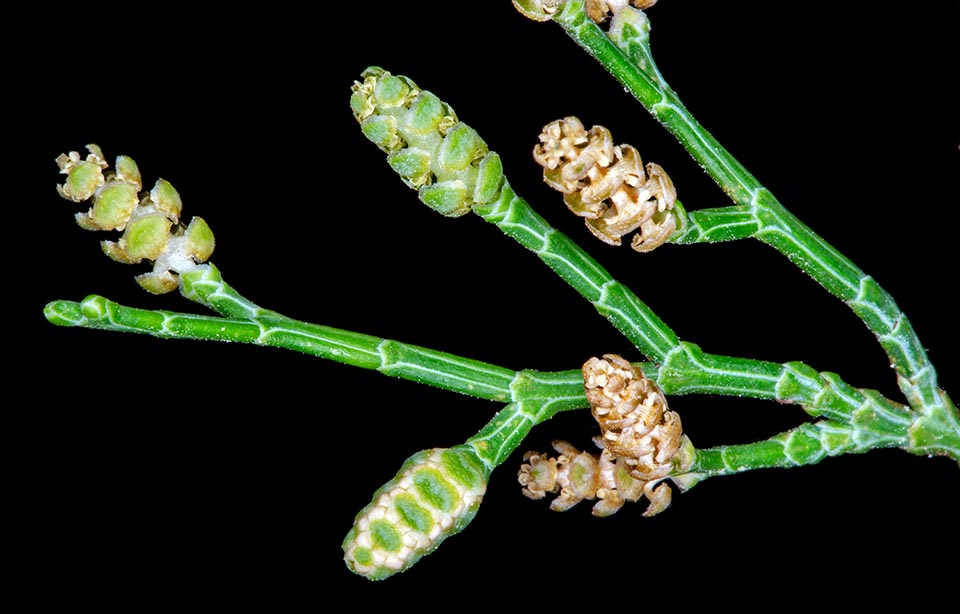 Male cones; except for one, they have already freed their pollen grains. Both the microsporophylls, which bear 4 or 5 microsporangia (functionally corresponding to pollen sacs of angiosperms) and the individual articles of branchlets are clearly visible. Each article is ‘covered’ by 4 scale-like leaves, in decussate pairs, appressed in a whorl-like © Giuseppe Mazza

The seeds are convex with two isomorphic wings each as wide as the seed; the set is 6-8 mm wide. The seed is not dormant but requires a dip in water for at least 24 hours to soften the integuments while for a regular germination it needs an alternation of temperatures between night (15 °C) and day (20 °C). The seedling has four cotyledons. T. articulata has a great ability to coppice and for this reason, sprouting from stump, can quickly reform a new crown after prolonged drought and, over all, after the passage of fire or grazing.

This species is native to the mountains of North-Western Africa, from Tunisia to Morocco; it is also spontaneous in the island of Malta (of which it is the national tree) and in the region of Murcia, South-Eastern Spain, on the mountains around Cartagena. In Northern Africa this species is present, even if with discontinuous and scattered populations, on a surface of about 8.000-10.000 km2 especially in mountainous regions where form mixed woodlands with incense juniper (Juniperus thurifera L.) up an altitude of 1,700 while to the south its range reaches the Tropic of Cancer in the Ahaggar massif (Algerian Sahara) where it grows with the cypress of the Tassili (Cupressus dupreziana A.Camus).

According to the International Union for Conservation of Nature (IUCN) the African populations do not cause concern («Least Concern» category) whilst the species is remarkably at risk of extinction in the two European areas («Endangered» category): in Spain it has about 8,500 plants grouped in four 4 disjointed subpopulations while in Malta its presence is about a hundred trees. The reason for this rarefaction, and also for its disappearance from other regions of the Southern Mediterranean coasts is due, more than to the competition with the Aleppo pine and the Mediterranean scrub, to cuts, excessive grazing and fragmentation caused by crops, urban centres and connection infrastructures. 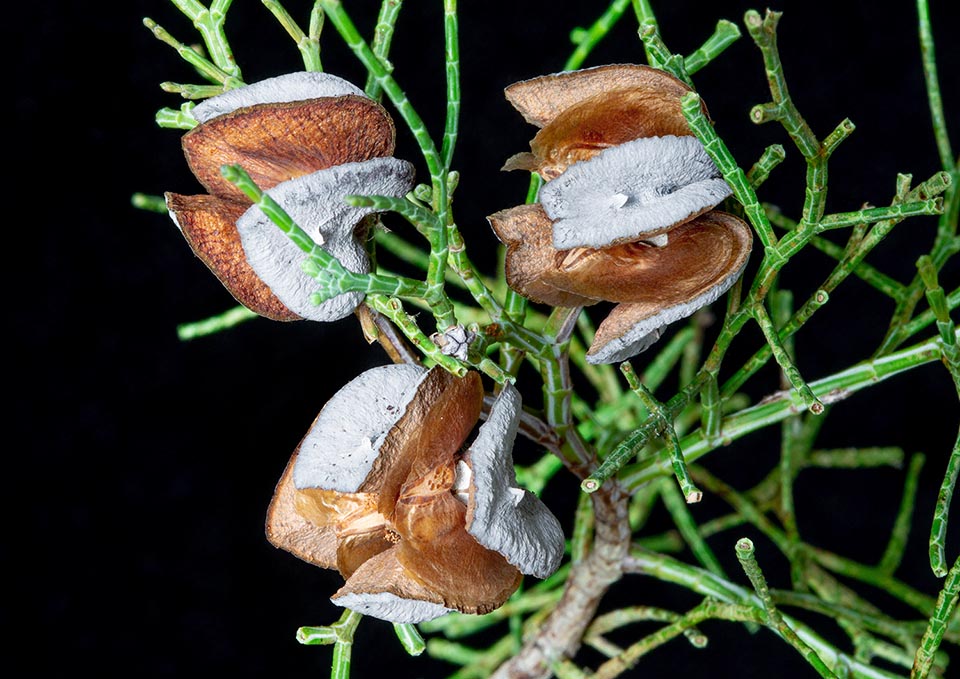 Seed dispersal from Tetraclinis cones; the scales have disjointed and it’s possible to glimpse the papery wings of the seeds © Giuseppe Mazza

The natural environment is characterized by a “subtropical Mediterranean, warm and arid” climate in which T. articulata, heliophilous species but mainly thermophilous, xerophilous, and very tolerant for the soils, finds suitable conditions. Main limitations stand in the low temperatures; particularly, it at most tolerate temperatures that only exceptionally and for short periods they drop 1 or 2 degrees below 0 °C.

It is considered as a ‘Macaronesian’ species, relic of the subtropical Pliocenic ‘laurisilve’ that characterized the Mediterranean Basin until the Pleistocene glaciations (about 2,5-2 million of years ago) when most of them disappeared and only some species survived especially in more suitable regions such as North Africa and the so-called “macaronesian archipelagos” (Canary Islands, Açores, Madeira, Cabo Verde, etc.). Fossil remains of Tetraclinis species have been found in France, Poland, Bulgaria and Italy: e.g., on the Romagna Apennines have been identified fossils of T. salicornioides (Unger) Kvacek, a species rather similar to the present, dating back to 5,7 million of years ago.

Its wood was particularly sought after and coveted by the Romans for wood veneers and marquetry works, so much that Cicero in the «Against Verres» (70 B.C.), reproaching Gaius Verres for his most important wrongdoings carried out in Sicily, reminds him the theft of a great wood panel of Tetraclinis:  […] tu maximam et pulcherrimam mensam citream a Q. Lutatio Diodoro, qui Q. Catuli beneficio ab L. Sulla civis Romanus factus est, omnibus scientibus Lilybaei abstulisti.» (In C Verrem actionis secundae Liber quartus, 37: you have taken away from T. Lutatius Diodorus […] a very large and beautiful sandarac table). 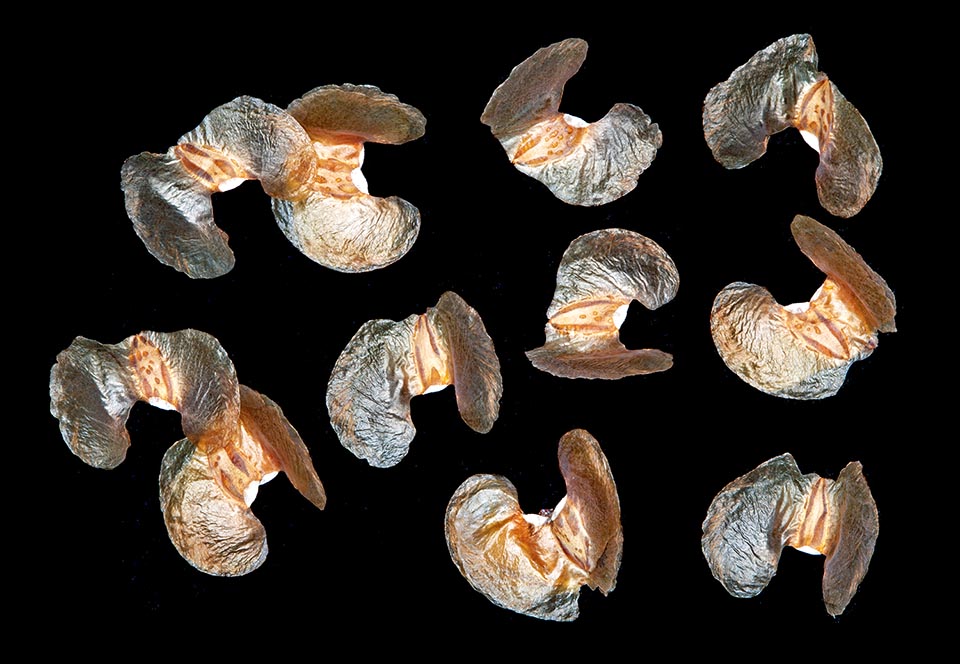 Actually it is to the Romans that we have to ascribe the disappearance of this species from several lands. Even if presently these plants are mainly cut to obtain firewood, at times, when burlwood logs are available, these are recovered and worked not only to obtain panels, but also to make objects of high craftsmanship.

Where the climate is hot and dry without ever freezing, T. articulata is used, albeit episodically, as ornamental plant and for bonsai. At least experimentally, oily and aqueous extracts of tissues of Tetraclinis plants seem to have an allelopathic effect. Apart from these uses in landscaping, by sure this species plays an important role in arid zones in preventing erosions and soil losses and thus reducing the risks of desertification.