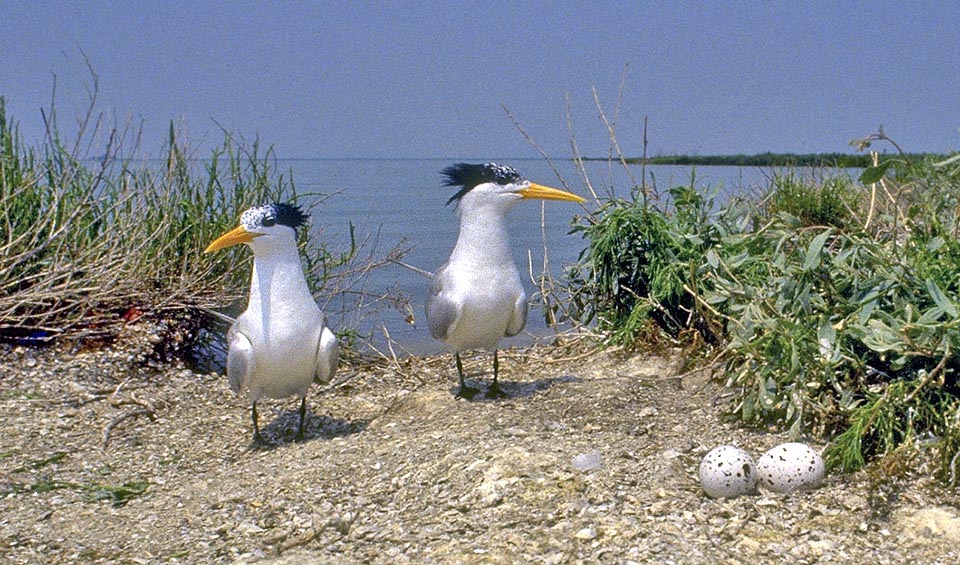 Pair with spawned eggs in a Valli di Comacchio islet, in a zone covered by bivalves debris © Pierandrea Brichetti

The Lesser crested tern (Thalasseus bengalensis Lesson, 1831) is a bird belonging to the subclass of the (Neornithes), order of the Charadriiforms (Charadriiformes), and family of the Larids (Laridae). The members of this group (previously forming the separate family Sternidae) differ from the true and proper seagulls due to the thin and pointed bill, the slender and short legs, the partly webbed feet, the very streamlined and narrow wings and the usually forked tail. The terns reproduce in numerous colonies, mixing willingly with similar species. They live along the sea coasts and close to inland waterways. They nourish mainly of fishes, insects and aquatic invertebrates. 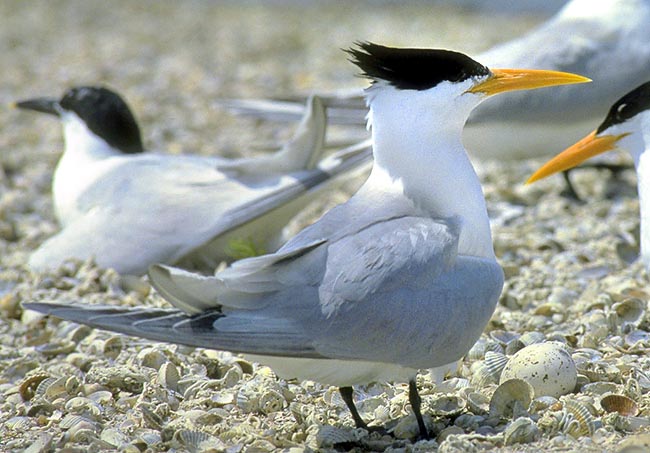 Polytypic species almost exclusively marine, with reproductive area limited to two quite separated districts, one including the Red Sea, Persian Gulf and Mediterranean, the other one present along the south-eastern New Guinea and northern Australia, with three recognized subspecies and a global population estimated in about 180.000-210.000 individuals.

The Mediterranean population, ascribed to the subspecies T. b. emigrata, seems concentrated in 3-4 small islands off Libya, with a consistency just above the 2000 pairs, whilst the European one, during the last 30 years, has not exceeded, yearly, the 5 nesting pairs, with cases or nesting attempts of pure or mixed pairs in France (Camargue, Banc d’Arguin), Spain (Ebro Delta, Valencia Albufera lagoon), Greece (Evros Delta) and United Kingdom (Farne Islands); in Italy, the first case of reproduction has been discovered in 1985 in the Valli di Comacchio and yearly reconfirmed at least till 2002, with absence in 1999, when the nesting has been ascertained in the Venetian Lagoon; the number of the reproducers has never, however, exceeded the 1-2 pairs per year.

It nests on sandy or coralline substrata, with very low, scarce or absent, vegetation, along the coasts of warm seas but preferably on small islands; also during the other seasons it keeps distinctly marine habits, accidentally getting in the hinterland. 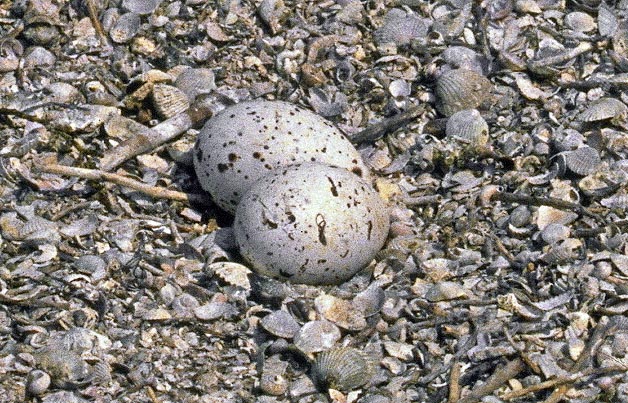 In Italy, it has nested on flat lagoon small islands (Valli di Comacchio, Venetian Lagoon), partially or totally covered by low halophytic vegetation, in strict association with the Sandwich tern, in whose colonies it tends to occupy the central zones covered by bivalves debris.

It is partial migrant in most of its tropical and sub-tropical home range, with movements and hibernation areas still not well known.

The Mediterranean population seems to hibernate mainly along the coasts of western Africa (especially in the Guinea Gulf), reached by following the northern coasts of North Africa, crossing the Strait of Gibraltar, and then going ahead along the Atlantic ones, whilst the individuals nesting in eastern Libya colonies might migrate towards the Red Sea; a limited number of individuals should remain to spend the winter in the low Mediterranean along the North-African coasts. The migration movements take place between the end of July and the beginning of November and between March and early June. Some errant individual has accidentally reached the inner zones of central Europe (Germany, Austria, Switzerland, France and Slovenia).

It is a medium-sized tern, extremely similar per size and structure to the more common Sandwich tern (Thalasseus sandvicensis), but the wings which are slightly narrower and the yellow-orange bill just bigger at the base and of different colours characters partly appreciable only by direct confrontation.

It reaches the length of 37 cm, with a wingspan of about one metre. When in reproductive livery it is recognized due to the black head, the candid lower parts and the grey upper ones, like the tail; the most important character for recognizing this species is the bright yellow-orange colour of the bill (black with yellowish apex in the Sandwich tern). In winter livery, the black colour of the head reduces to a thin belt on the nape. Male and female cannot be distinguished.

The vocalizations resemble to those of the Sandwich tern, but are slightly less strident and acute.

Markedly gregarious, it forms repro- ductive colonies even much consistent, associating willingly to congeneric species of similar or greater size; in the Mediterranean it is often sighted aggregated to the Sandwich tern.

The pair bond is of monogamous type. A rudimentary nest is built between May-June on the ground and the female spawns there 1-2 eggs, to whose incubation take care both sexes for 21-26 days; the young, initially gathered in “kindergartens”, become apt for flying after 30-35 days, but are fed by the adults for various more months.

The diet is based mostly on small marine fishes and partly on invertebrates, especially crustaceans. For catching the preys, it often dives perpendicularly from above, but at times it utilizes also the technique of the Common tern (Sterna hirundo), by preceding the dives with a not particularly frenetic “holy spirit”.