The Jardin Exotique of Monaco : 7.000 species

The garden of wonders … is in the Principality of Monaco. History and plants of the Exotic Garden, declared “ World Patrimony of Humanity ” by UNESCO. 7000 different species of plants and 550.000 tourists every year. To avoid putrefaction of the roots, most of cactus grow in pots dug in the rock. 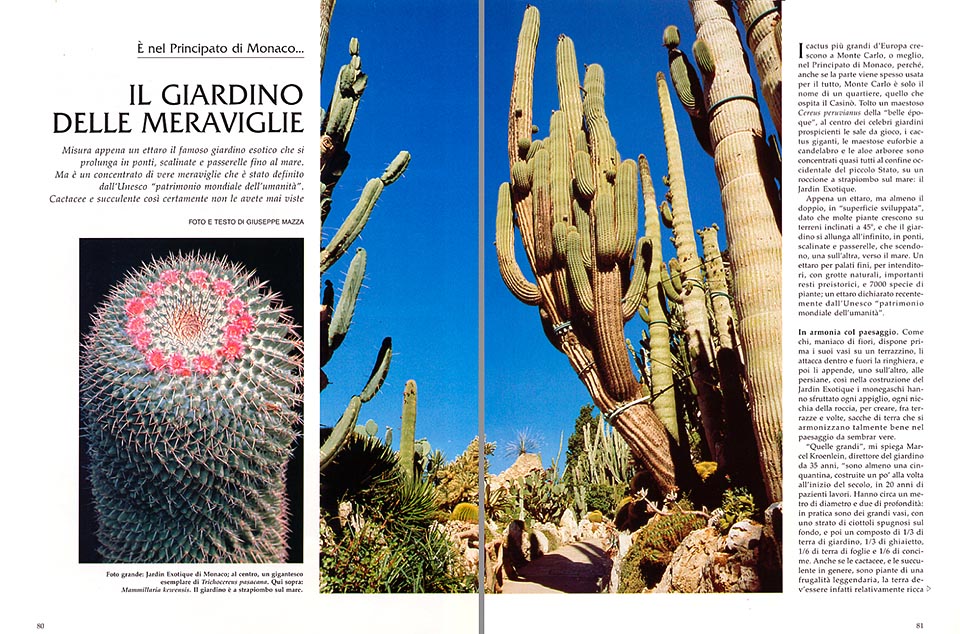 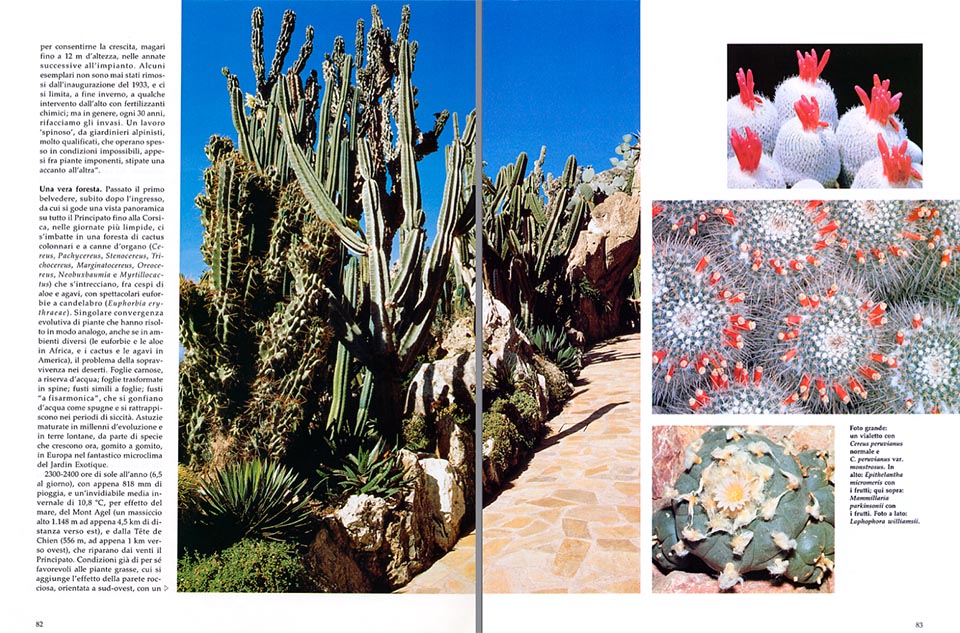 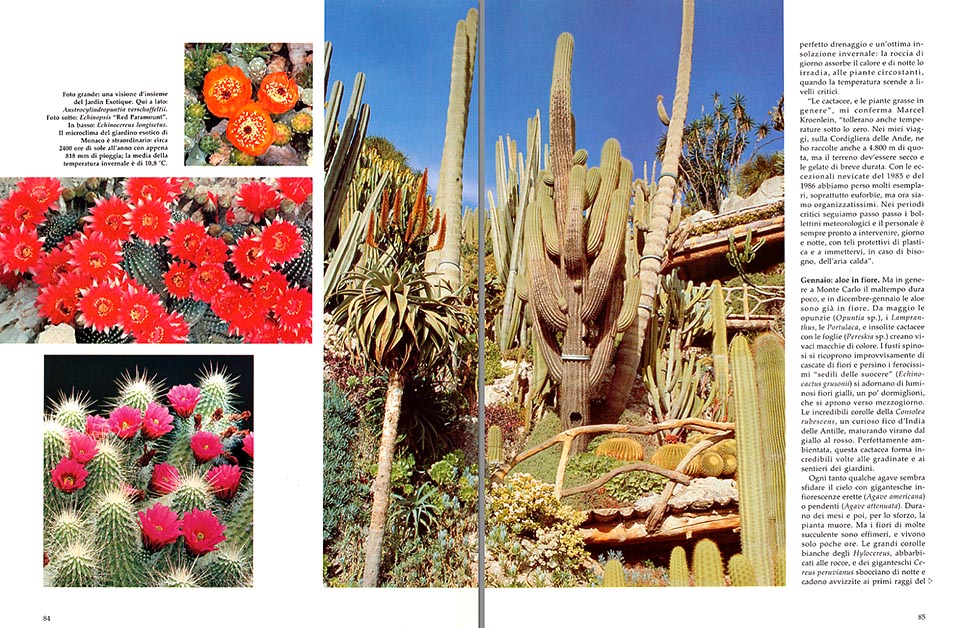 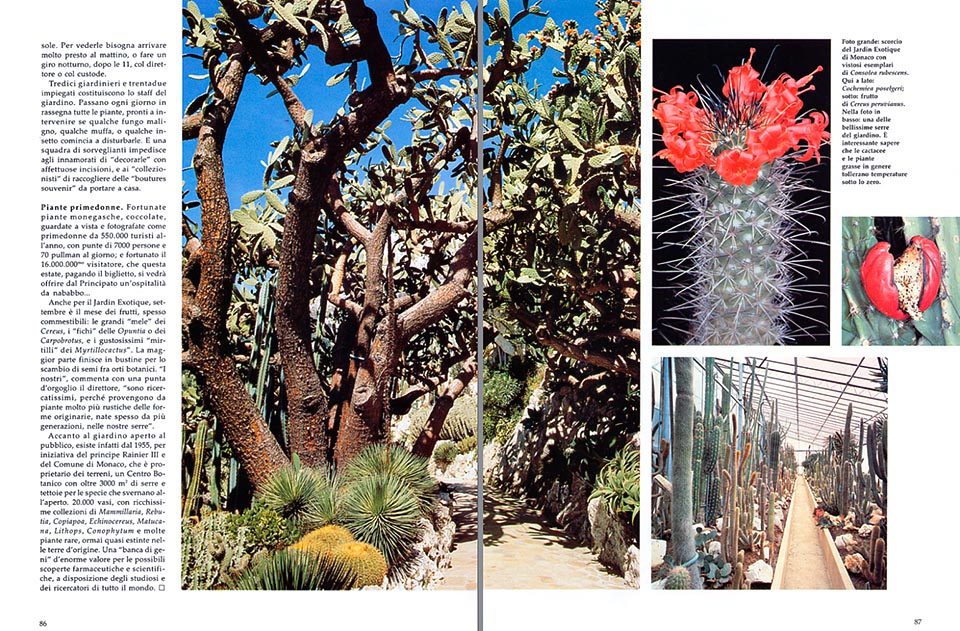 The greatest cacti in Europe grow in Monte Carlo, or better, in the Principality of Monaco, because, even if the part is often used for the whole, Monte Carlo is only the name of a quarter, the one hosting the Casino.

Apart the majestic Cereus peruvianus of the “belle époque”, at the centre of the famous gardens facing the gaming rooms, the huge cacti, the majestic candelabrum euphorbies, and the arboreal aloes, are almost all concentrated at the western boundary of the small nation, on a big rock overhanging the sea: the Jardin Exotique.

One hectare only, but at least the double, in “developed surface”, seen that many plants grow on grounds sloping at 45°, and that the garden stretches out to infinity, in bridges, flights of steps, catwalks, which go down, one over the other, towards the sea.

One hectare for good palates, for connoisseurs, with natural grottoes, important prehistoric remains, and 7.000 species of plants; one hectare declared recently by UNESCO “World Heritage Site”.

Like a housewife fan of flowers, who places her pots, first, on a small balcony, fastens them inside or out the railing, and then hangs them, one over the other, to the shutters, so, while building the Jardin Exotique, the Monegasques have taken advantage of each hold, each recess of the rock, to create, between terraces and vaults, hidden coves of land which so much well harmonize with the landscape, to look genuine.

The great ones, Marcel Kroenlein, director of the garden since 35 years, explains to me, are at least fifty or so, built little by little, from the beginning of the century, during 20 years of patient works.

They have a diameter of about one metre, and two of depth: practically, they are big pots, with a layer of spongy pebbles on the bottom, and then a compound of 1/3 of garden land, 1/3 of thin gravel, 1/6 of leaves land and 1/6 of manure A.

Even if the cactaceae and, generally speaking, the succulent plants, are all of a legendary frugality , in fact, the soil must be sufficiently rich to allow their growth, even up to 12 m of height, during the years following the implantation. Some specimen have never been removed since the inauguration of 1933, and we confine, by the end of the winter, to some interventions from the top, with chemical fertilizers, but normally, every 30 years, we renew the pots. A “prickly” job, for very qualified, climbing gardeners, which often operate in impossible conditions, hanging between imposing plants, crammed one close to the other.

After the first belvedere, just after the entrance, from where we enjoy an eagle view of the whole Principality, up to Corsica Island, in the most transparent days, we run across a forest of columnar and organ pipe cacti (Cereus, Pachycereus, Stenocereus, Trichocereus, Marginatocereus, Oreocereus, Neobuxbaumia and Myrtillocactus), which interweave, between bushes of aloes and agaves, with spectacular candelabrum euphorbies (Euphorbia erythraeae).

Odd evolutional convergence of plants, which have solved in an analogous way, in different habitats (the euphorbies and the aloes in Africa, and the cacti and the agaves in America), the problem of the survival in the deserts.

Fleshy leaves, as a reserve of water, leaves transformed in thorns; stems similar to leaves; “accordion-like” stems, which swell of water like sponges, and contract during the drought periods. Tricks generated in millennia of evolution, in distant lands, by species which grow now, side by side, in Europe, in the fantastic micro-climate of the Jardin Exotique.

Conditions already favourable by themselves, for the succulent plants, to which we have to add the action of the rocky wall, oriented to south-west, with a perfect drainage and an excellent winter insolation. By day, it absorbs the warmth, and irradiates it, during the night, to the surrounding plants, when the temperature drops to critical levels.

The cactaceae, and generally all succulent plants, Marcel Kroenlein explains to me, tolerate also temperatures below the zero. During my trips, in the Andes, I have collected some of them at even 4.800 metres of altitude, but the ground must be dry and the frosts of short duration. With the exceptional snowfalls of 1985 and 1986, we have lost many specimen, mostly euphorbies, but now we are very well organized. In the critical periods, we follow strictly the weather forecasts, and the staff is always ready to intervene, day and night, with protecting plastic clothes, and to inflate them, if necessary, with warm air.

But usually, in Monte Carlo, the bad weather is short lasting, and in December-January the aloes are already blooming. From May, the opuntias (Opuntia spp.), the Lampranthus, the Portulaca, and odd leafy cactaceae (Pereskia sp.), create lively specks of colour. The thorny stems cover suddenly of cascades of flowers and even the very ferocious Mother-in-Law’s Cushions (Echinocactus grisonii), adorn themselves with bright yellow flowers, somewhat sleepy, which open only by noon. The incredible corollas of the Consolea rubescens, a strange prickly pear of the Antilles, while ripening, turn from yellow to red. Perfectly acclimatized, this cactacea forms incredible vaults over the flights of steps and the paths of the garden.

Every now and then, some agave seem to defy the sky with gigantic upright inflorescences (Agave americana), or hanging (Agave attenuata). They last some months and then pass away, exhausted by the effort.

But the flowers of many succulents are ephemeral, and last only few hours. The huge white corollas of the Hylocereus, clung to the rocks, and of the gigantic Cereus peruvianus, blossom only during the night and fall down, withered, under the first rays of the sun. In order to see them, you have to be there very early in the morning, as soon as they open the gates, or to effect a night visit, after 2300 hours, with the Director or the guardian.

Thirteen gardeners and 32 employees, form the staff of the Garden. Every day, they inspect all the plants, ready to intervene if some malignant fungus, some mould, or some insect, have the intention to disturb them. And a very well organized team of surveyors does not allow the sweethearts to “decorate them” with affectionate incisions, and the“collectors”, to take away some “boutures souvenir”, to carry at home.

Lucky Monegasque plants, cuddled, closely watched, and photographed, like stars, by 550.000 tourists per year, with peaks of 7.000 persons and 70 busses per day; and lucky will be the 16.000.000th visitor, who, this summer, while paying for the entrance, will be offered a nabob-like hospitality by the Principality.

Also for the Jardin Exotique, September is the month of the fruits, often edible: the big “apples” of the Cereus, the “figs” of the Opuntia or the Carpobrotus, and the very tasty “blueberries” of the Myrtillocactus.

Marcel confesses to me that he has tried to make some jams with them, and that also HSH the Princess Grace, did like them. But most of them end up in small envelopes, well labelled, for the exchanges of seeds between botanical gardens.

Ours, he comments, rather proudly, are very much demanded, because they come from plants much more rustic than the original ones, often born, from several generations, in our greenhouses.

Close to the garden open to the public, in fact, it exists, since 1955, on the initiative of HSH Prince Rainier III, and of the Municipality of Monaco, landowner, a botanical centre with more than 3.000 square metres of greenhouses and shelters for the species wintering in open air. 20.000 pots, with very rich collections of Mammillaria, Rebutia, Copiapoa, Echinocereus, Matucana, Lithops, Conophytum and many rare plants, nowadays almost extinct in their native countries.

A “genetic bank”, of enormous value for the possible pharmaceutical and scientific discoveries, at disposal of the scholars and the researchers from all over the world.