The Parc Phoenix of Nice

The Park of wonders. All about the Phoenix Park of Nice. The biggest greenhouse in the world. 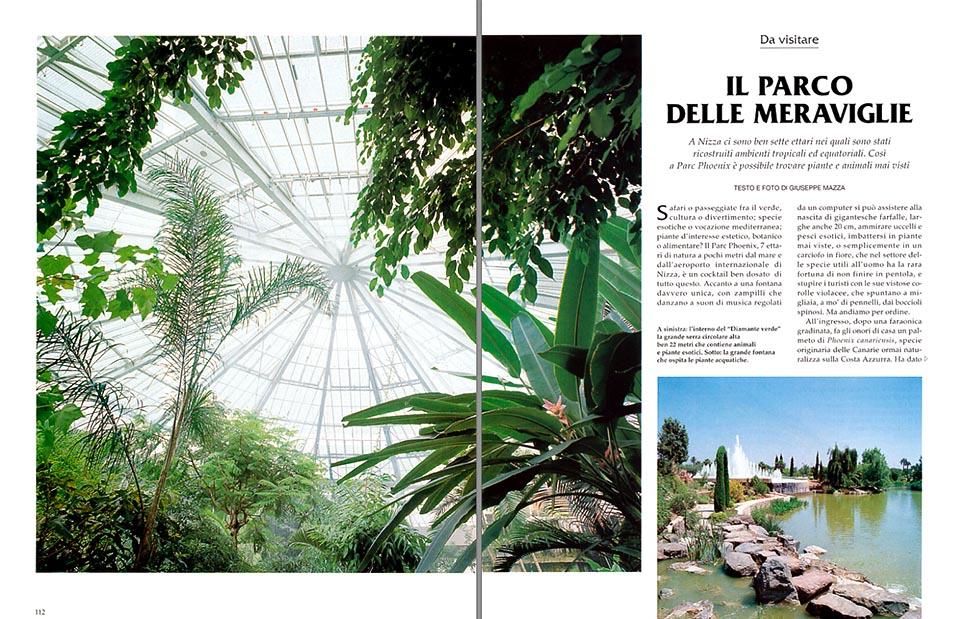 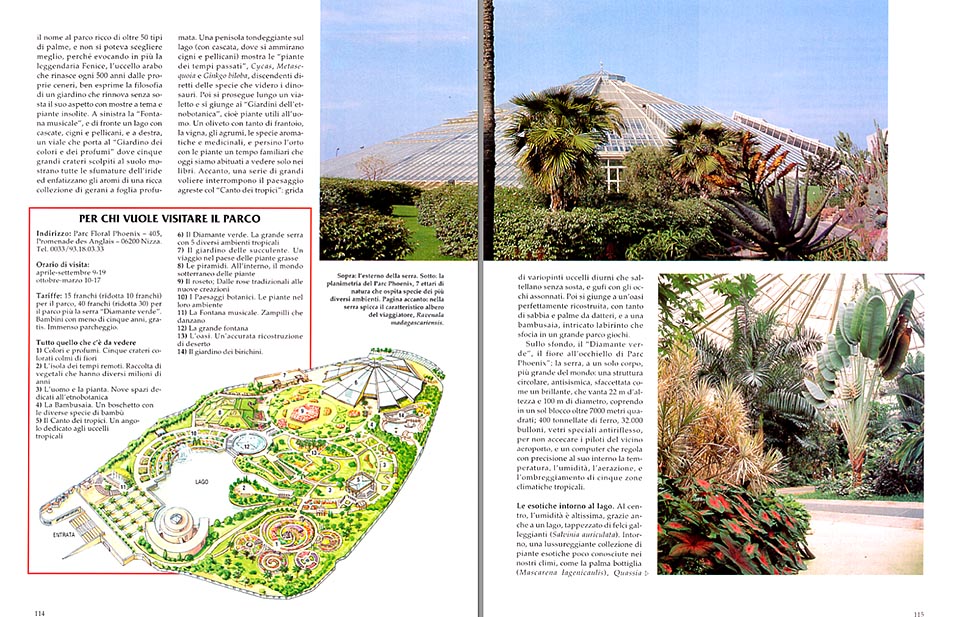 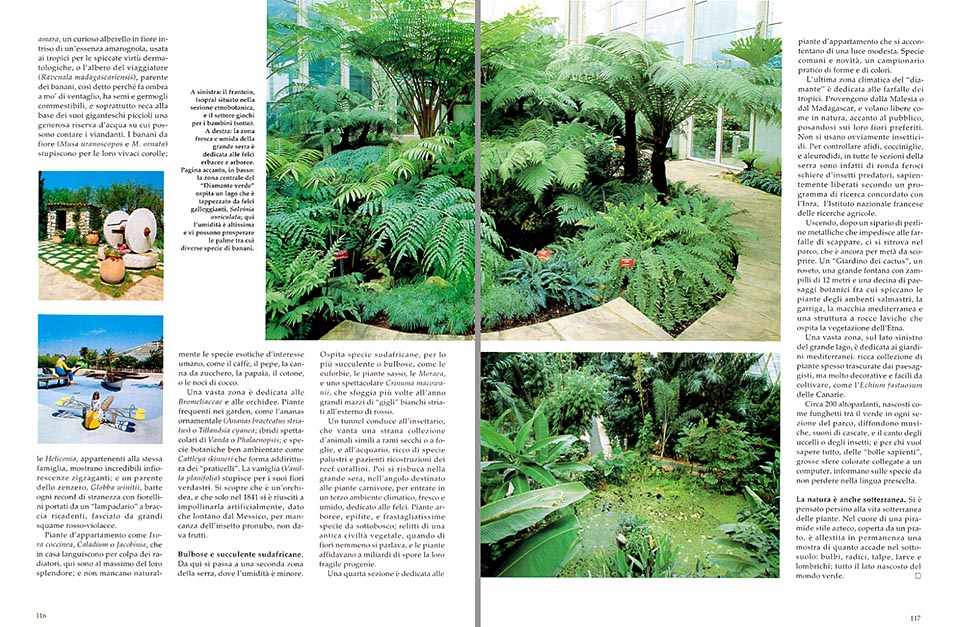 Safari, or walks in the green; culture or fun; exotic species or Mediterranean vocation; plants of aesthetical, botanical or alimentary interest?

The Parch Phoenix, 7 hectares of nature close to the sea and the international airport of Nice, is a well dosed cocktail of all above.

Close to a really unique fountain, with jets dancing with the music, governed by a computer, we can be present at the birth of gigantic butterflies, wide even 20 cm, admire birds and exotic fishes, run across never seen plants, or simply an artichoke in flower, which, in the sector of the species which are useful for man, has the rare chance of not finishing up in a pot, and, instead, to astonish the tourists with its showy purple corollas, which come out by thousands, like brushes, from the thorny buds.

But let’s go ahead by order. At the entrance, after a pharaonic flight of steps, a palm-grove of Phoenix canariensis, species which comes from the Canary Islands, and by now naturalized in the Côte d’Azur, gives the welcome.

It has given the name to the park, rich of more than 50 types of palms, and they could not make a better choice, because, recalling also the legendary Phoenix, the Arab bird which returns to life every 500 years from its own ashes, well expresses the philosophy of a garden which renews incessantly its look with thematic displays, and unusual plants.

On the left side, a noisy group follows the exploits of the “musical fountain”; in front of a lake with waterfalls, swans and pelicans; and on the right, a drive which leads to the “Garden of the colours and of the scents”, where five huge craters dug in the ground, show all the nuances of the rainbow, and emphasize the aromas of a rich collection of perfumed leaves geraniums.

A roundish peninsula on the lake, shows the “plants of the old times”, Cycas, Metasequoia and Ginkgo biloba, direct descendants of the species which could see the disonaurs in to their eyes.

Then , we go ahead along a small drive, and we reach the “Garden of the ethnic-botany”, that is, of the plants useful to the man. An olive-grove, with even and oil-mill, the vineyard, the citrus-grove, the aromatic and medicinal species, and even the orchard with once familiar plants, which nowadays we are used to see only in the books, or on the tins of sauces.

Close to that, a succession of great aviaries interrupts the rustic scenery with the “Tropical song”: shouts of variegated day birds, which skip about, incessantly, and owls with drowsy eyes, which are dreaming of far away lands.

Then, we reach a perfectly reconstructed oasis, with even the sand and date-palms, and a grove of bamboos, where the kids get lost in an intricate labyrinth which flows into a huge game area with a nautical look.

On the background, the “Green Diamond”, the pride of the Parc Phoenix, the greenhouse with only one “tenant”, the greatest in the world: a circular structure, anti-seismical, faceted like a diamond, which boasts 22 metres of height and 100 metres of diameter, covering in only one block more than 7.000 square metres.

400 tons of iron, 32.000 bolts, special anti-reflection glasses, in order not to dazzle the pilots of the nearby airport, and a computer which regulates in its interior the temperature, humidity, ventilation, and the shading of five tropical climatic zones.

In the principal one, at the centre, the humidity is very high, thanks also to a lake, covered of floating ferns (Salvinia auriculata).

All around, a luxuriant collection of exotic plants, not much known in our climates, such as the Bottle palm (Mascarena lagenicaulis), the Quassia amara, an odd, small tree in flower, drenched with a sour essence, used in the Tropics for its conspicuous dermatological virtues; or the Travellers’ Tree (Ravenala madagascariensis), relative to the Banana-trees, so called, because it makes a fan-shaper shade, which has edible seeds and buds, and, above all, carries at the base of its huge petioles an abundant reserve of water on which can rely the wayfarers.

The Flower bananas (Musa uranoscopos and Musa ornata), amaze for their showy corollas; the Helicornia, belonging to the same family, show incredible zigzagging inflorescences; and a relative of the ginger, the Globba winitii, beats every record of strangeness, with small flowers, carried by a chandelier with falling arms, wound by big red-purple squamae.

Interior plants, like the Ixora coccinea, the Caladium or the Jacobinia, which, inside the houses, languish because of the radiators, here reach the maximum glory; and there are not lacking, of course, the exotic species of human interest, such as the coffee, the pepper, the sugar-cane, the papaw, the cotton, or the coconut-palm.

A vast space is dedicated to the Bromeliaceae and to the Orchids. Plants which are frequent in the Gardens, like the Red Pineapple (Ananas bracteatus striatus), or the Tillandsia cyanea; spectacular hybrids of Vanda or Phalaenopsis; and botanical species well acclimatized, like the Cattleya skinneri, which even forms some “small lawns”.

The Vanilla (Vanilla planifolia) astounds for its greenish flowers. We discover that it is an orchid, and that only in 1841, they have been able to pollinate it artificially, as, far away from Mexico, and therefore from its pollinators, was not bearing any fruit.

From here, we proceed to a second part of the greenhouse, where the humidity is lesser. It guests South African species, mostly succulent or bulbous, like the euphorbias, the stone plants, the Moraea, and a spectacular Crinum macowanii, which exhibits, several times per year, huge bunches of white “lilies”, striated, externally, of red.

A tunnel leads to the insectarium, which boasts a strange collection of animals similar to dead branches, or leaves, and to the aquarium, rich of marsh species and patient reconstructions of the coral reefs.

Arboreal plants, epiphytes, and very indented under wood species; wreckages of an ancient vegetable civilization, when the flowers did not yet exist, and the plants were still entrusting their frail progeny to billions of spores.

Thalluses adorned with arabesques, spots, or rust-brown zones, which render the leafy branches of a majestic Platycerium bifurcatum, similar to the horns of the elks.

A Louisiana style cottage, introduces in a fourth section dedicated to the apartment plants, which content of a modest light. Common species and new ones; a practical sample list of forms and colours.

The last area of the Diamond is reserved to the tropical butterflies. They come from Malaysia and Madagascar, and fly, as free as in the wild, close to the public, landing on their preferred flowers.

Obviously, insecticides are banned. In order to control aphids, cochineals, and white flies, in all sectors of the greenhouse are, in fact, going around fierce swarms of predatory insects, wisely released following a research programme in agreement with the INRA, the French National Institute of Agricultural Researches.

When going out, after having passed through a curtain of metallic beads, which does not allow the butterflies to flee, we find ourselves in the park, which is still, for a half, to be discovered.

A “Garden of the cacti”, a rose-garden, a great fountain with 12 metres jets, and about ten botanical landscapes, between which are conspicuous the plants of brackish areas, the garrigue, the Mediterranean thicket, and a structure with lava rocks, which guests the Etna vegetation.

A vast space, on the left side of the great lake, is dedicated to the Mediterranean gardens: a rich collection of plants often neglected by the landscape architects, but very ornamental and easy to cultivate, such as the Echium fastuosum of the Canary Islands.

About 200 loudspeakers, hidden, like small mushrooms, between the green in every part of the park, diffuse music, sounds of waterfalls, and the singing of birds or insects; and for those wishing to know everything, “sapient bubbles”, big, coloured spheres, connected with a computer, inform about the species not to lose, and in the selected language.

They have even thought to the underground life of the plants. In the heart of an Aztec style pyramid, covered by a lawn, there is a permanent exhibition of what happens under the soil: bulbs, roots, moles, larvae, and earthworms; all the hidden side of the Green World.

The Parc Phoenix of Nice was last modified: May 24th, 2019 by Giuseppe Mazza