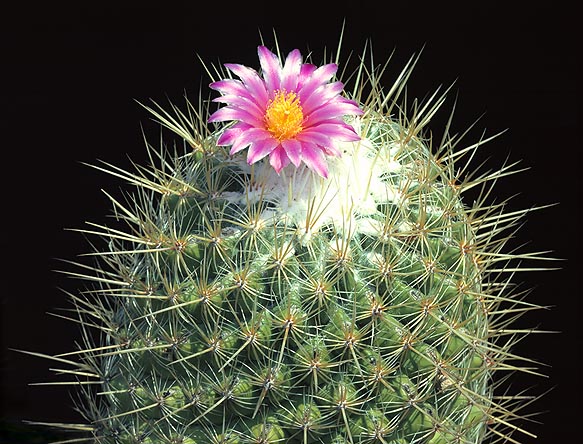 The plant is native to north-eastern Mexico (states of Nuevo Leon, Dan Luis Potosi and Tamaulipas), where it grows in semi-arid areas (Chihuahua desert), in association with thorny shrubs, on rocks or on stony calcareous soils between the 600 and the 1.500 m of altitude.

The Thelocactus conothelos (Regel & Klein) F.M. Knuth (1935) has usually a single, ovoid or cylindric short stem, tall up to 30 cm with a diameter of 15 cm; the ribs, not much evident, are spirally placed with almost conical tubercles. The woolly areoles, particularly when young, are equipped with nectariferous glands and with 8-20 radial, thin, thorns of a grey to ochre colour, 1-2 cm long, and 2-4 central ochre thorns tending to the greyish with the age, straight or slightly curved, long up to about 5 cm and more robust than the radial ones. The diurnal flowers, generate ate the apex of the more recent areoles, are funnel-shaped, up to 6 cm of diameter, with ovary and floral tube covered by imbricate scales, thin and membranous, of a brown purple colour with whitish margin, the tepals are acuminate of variable colour from the orange yellow to the magenta with a central band more intense than the internal ones. The fruits are globular, of about 1,5 cm of diameter, covered by scales and with the dried residual of the flower; the seeds are pyriform and black. It reproduces almost exclusively by seed as the plant rarely produces suckers at the base.

Easily cultivated plant, it is to be placed in full sun, or, however, at the maximum possible luminosity, on particularly porous and draining soils which may be formed by common fertilized garden earth, coarse sand (or agri-perlite) and crushed dustless stone in equal quantities. Even if it can stand, in dry soil and for short time, temperatures of -7 °C, up to -10 °C for some local forms, it is better not to expose it to temperatures much lower than the 0 °C, especially if in presence of humidity, therefore, where the climate does not allow the cultivation in open air in “desert” gardens, it is to be cultivated in pot, with the same aforementioned modalities, in order to be sheltered in winter. In summer, during the vegetative period, it is to be regularly watered, but the soil is to be allowed to dry up completely before irrigating again; in winter it is to be kept dry with temperatures possibly between the +5 and the +10 °C; this cold and dry period is helping its blooming.

Thelocactus conothelos was last modified: May 9th, 2018 by Giuseppe Mazza