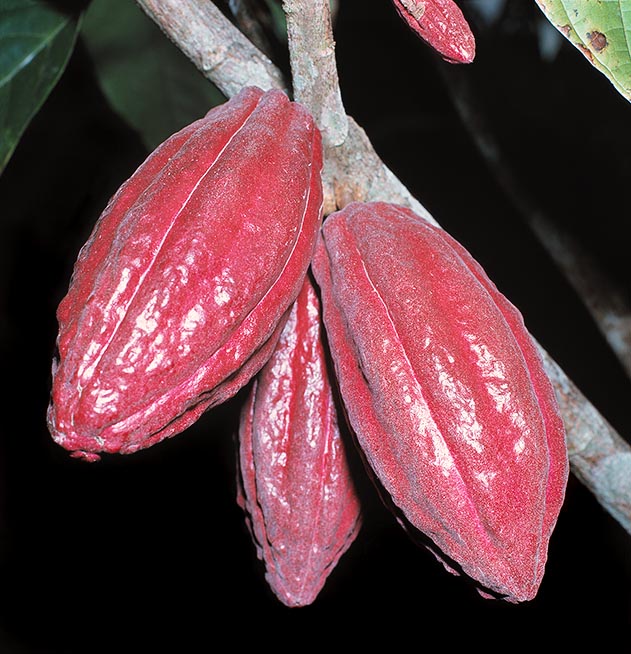 The species is native to tropical America, but its exact place of origin is unknown, as it was already extensively cultivated in pre-Columbian times, after some that might be the pluvial forest of the Amazon Basin, at low altitudes, where many species of Theobroma are met growing in the wild.

The name of the genus, assigned by Linnaeus, is the combination of the Greek terms “theos” = god and “broma” = food, therefore gods’ food, as it was considered in the Mayan and Aztecan tradition; the name of the species is the Spanish name of the plant, which, in turn, should be coming from the Aztec “cacahuatl” = bitter water.

The Theobroma cacao L. (1753) is an evergreen tree tall up to about 12 m, but in cultivation is maintained lower, 2-4 m, by means of prunings in order to facilitate the harvest, with erect trunk having grey-brown bark; the leaves are alternate, elliptic-oblong or oblong-obovate with entire, slightly waved, margin and long pointed apex, 10-30 cm long and 5-12 cm broad. Inflorescences in cymes, on an about 1,2 cm long peduncle, directly on old wood of the trunk or of the main branches (cauliflory), having a rather complex structure with hermaphrodite flowers of about 1,8 cm of diameter.

The calyx is pink with lanceolate lobes, 0,6-0,8 cm long with the margins equipped with tiny hairs, the corolla is formed by 5 petals, each one of which forms at the base a sort of translucid hook, with purple bands in the inner part, reducing to a thin retroflexed strip and then widens again in a sort of a yellowish flag, 5 linear staminodes (sterile stamina) surrounding the style, and 5 fertile stamina bent in such a way that the anthers are placed inside the hook formed by the petals. 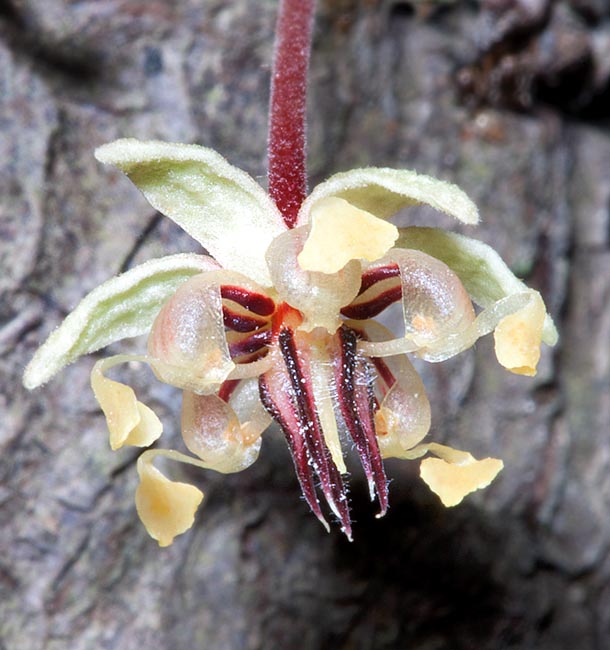 Usually, the pollination is crossed, mainly done by small insects belonging to the order of the Dipterans (Diptera L., 1758), being the self-pollination difficult due to the particular position of the anthers as aforementioned; of the great number of flowers the plant produces, only a few per cent is fecundated and generates a ripe fruit.

The fruit, which takes 5-6 month for ripening, is an ellipsoid, 10-30 cm long, drupe of 5-12 cm of diameter, run longitudinally by 10 whitish, green or red, grooves, the pericarp is woody, when exsiccated, 0,4-0,8 cm thick. The seeds, surrounded by a mucilaginous pulp (arillus) with a particularly pleasant taste, and placed in 5 longitudinal cells in number of 10-14 per cell, are ovoid, slightly compressed, 1,5-2,5 cm long, 1-2 cm broad and 0,4-1 cm thick, formed by a brown outer membrane, coriaceous, by a thin whitish inner pellicule, by the two cotyledons and by the tiny embryo with its relevant radicle.

The last one is called “cacao forastero” and is nowadays, with its varieties, absolutely the most widely grown, as being the fastest growing and the most resistant to diseases and to adverse environmental conditions, even if it gives a product of lesser quality than that obtained from the species and its varieties, the “cacao criollo”, more delicate and with a lesser yield; from their crossing they have obtained plants giving a product with intermediate characteristics, called “cacao trinitario”.

It usually reproduces through the seeds which must be planted, after having extracted them from the mucilage covering them, in short time, as they have a short lasting germinability, about one week after the extraction from the fruit, unless special treatments. The seeds may be planted directly is the soil is shaded or otherwise, in a seedbed; they germinate in about 2 weeks and the young plants are to be kept shaded for at least the first 3-4 years, and then can be gradually transferred in a more luminous position, but always at least under a slight shade; in order to reproduce a desired variety, we must use, by the third year of age, the grafting, cutting or layering. 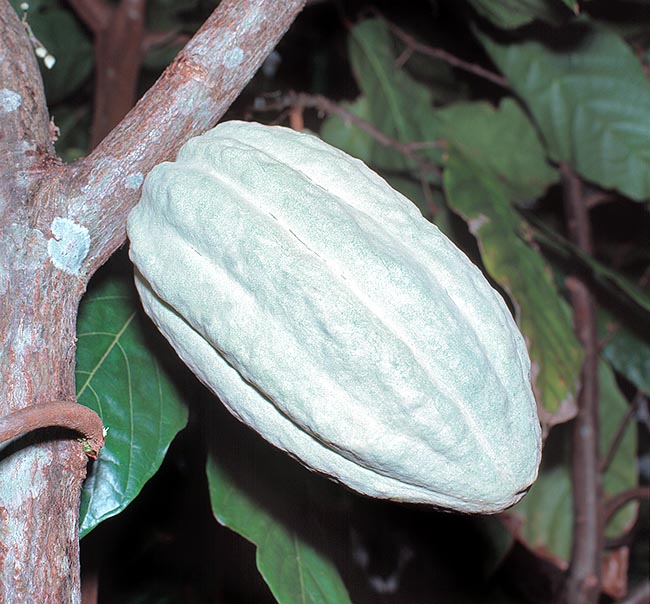 The fruits take 5-6 months to ripe and can be whitish, green, red or yellow © Giuseppe Mazza

The tree begins to produce by the fourth-fifth year, flowers and fructifies almost continuously, provided the conditions of temperature and humidity are favourable, but usually there are two seasons of maximum harvesting, different depending on the location; the fruits are cut manually from the plant when completely ripe. The average production of a tree is of 1-2 kg of dried seeds.

It adapts to relatively dry as well as much humid tropical and subtropical climates, but prefers those with high and constant temperatures, with daily lowest over the 18 °C, even if it can stand for short time lower temperatures, but never less than 13 °C, and rainfalls abundant and distributed along the whole year. It can be cultivated, indicatively, in the zone included between the North and South 20th parallel, at low altitudes, but the best yield takes place close to the Equator, within the tenth parallel.

It requires deep soils, where its tapering root may reach the two metres of depth, loose soils, humid, but well drained and aerated, being the roots sensitive to water stagnations and to poor oxygenation, and rich in organic substance; it particularly fears the wind, and therefore is to be placed in sheltered zones or having appropriate windbreak barriers, or, as often is the case, in association with other cultures (banana trees, palms, tall trees, etc.) which cover the double function of protecting from the wind and furnishing a partial shade. The seeds contain approximately from 40 to 50% of oil, 13% of proteins, 35% of carbohydrates, alkaloids, especially theobromine, about the 2% and, less, caffeine, vitamins B and C and minerals; the oil, solid at room temperature, is composed by the 37% of oleic acid, 34% of stearic acid, 26% of palmitic acid, 2% of linoleic acid and traces of other acids which forms what is commonly called cocoa butter, mostly utilized for the production of the chocolate and, in lesser quantity, also in medicine and in the cosmetics industry.

For the extraction of the cocoa and of the butter, the fruits, called “cacao pods”, are broken and the seeds extracted and cleaned from most of the mucilage covering them, and then are put to ferment in pools or in pits for 2-10 days, usually covered by banana leaves and periodically stirred. 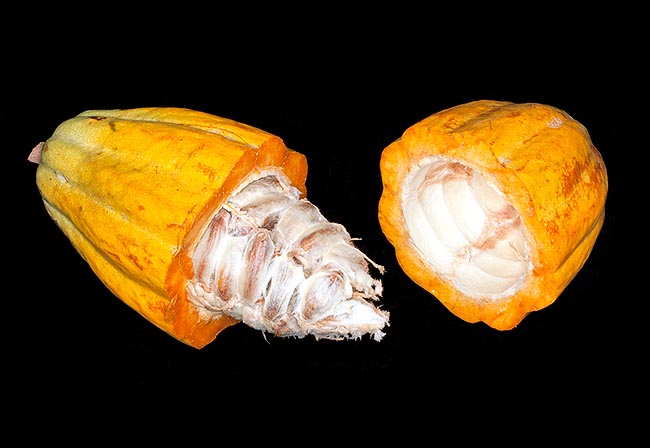 The cacao is extracted from the seeds, surrounded by edible pulp © Giuseppe Mazza

This operation has the aim of eliminating the residuals of mucilage, facilitating the removal of the pellicule covering them, stopping the growth of the embryo, causing the partial loss of the sour taste and, above all, of producing a series of chemical alterations which will concur to give the typical aroma, taste and high concentration of antioxidants, the highest of any food, which then will characterize the cacao, the fermentation is therefore the most important step in its production; later on the seeds are dried in the sun or in appropriate dryers. In some countries of continental America, the seeds are dusted with red clay, which, besides giving a uniform colour renders them less subject to alteration.

These operations are usually done near the place of harvesting, the dried fruits are then sent in the countries where they will be submitted to the further working processes, in the first place the roasting, at 100-140 °C for about one hour, other critical process conditioning the characteristics of the final product, the roasted cotyledons have, in fact, already the typical aroma and taste of the chocolate. After the roasting, which reduces the humidity to some per cent and removes undesirable components and parasites, the seeds undergo a process of screening for removing the outer pellicule and the embryonic radicle from the cotyledons, which would confer the final product an unpleasant taste. The roasted cotyledons are then ground obtaining, by heat, a viscous mass called “cocoa liquor” from which they get, through pressure, the cocoa butter and, from the solid residue, which still contains from the 10 to the 20% approximately of fats, through grinding, the cocoa powder; these are the basic materials for the production of the countless types of chocolate.