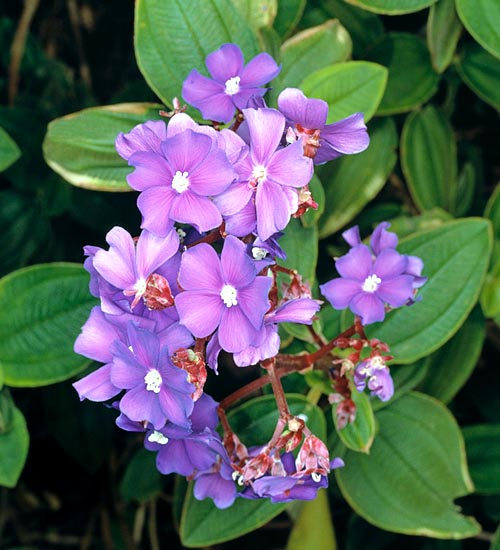 The name of the genus comes from the name used by the Guyana populations; the name of the species is the combination of the Greek words “héteros” = different and “mallos” = wool, hairs, due to the different down on the pages of the leaves.

The Tibouchina heteromalla (D. Don) Cogn. (1885) is a ramified erect shrub, up to about 1,80 m tall, having branches with quadrangular section covered by a thin tomentum.

The leaves, on a 1-3 cm long, tomentose petiole, are ovate-cordate, 10-15 cm long and 8-10 cm broad, with obtuse tip and entire edge, coriaceous, of an intense green colour, crossed by 5-7 veins departing from the base and thickly covered, on the upper page, by short grey bristles, and, below, by a thick whitish woolly tomentum.

The inflorescences are up to 30-40 cm long terminal racemes, carrying several flowers with flat, obovate petals, violet or purple, about 1,5 cm long.

The fruit is an about 1 cm long, ovoid capsule containing tiny reniform seeds. It reproduces by seed, to be distributed on the surface of the substratum which is to be kept humid at a temperature of 20-22 °C, and by cutting. It is a very ornamental species thanks to the big leaves with a velvety surface and to the showy flowering which lasts from mid-summer to early winter. It is cultivable in the tropical and subtropical climate zones preferably under a slight shade or in full sun only in the morning; its cultivation may be tried in the warm-temperate zones, as it can stand some degrees under the 0 °C for a very short period, possibly with the loss of the aerial part, which will grow again in spring. 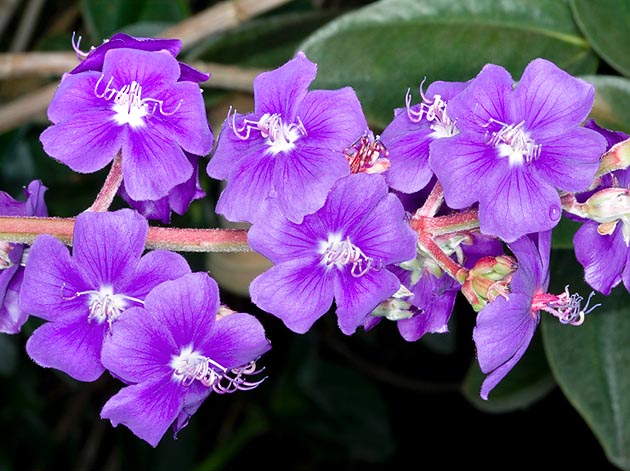 It requires an acidic soil rich of organic substance and perfectly draining, as it is particularly sensitive to the water stagnations; any pruning, if required, are to be done by late winter in order to keep compact the vegetation.

It can be cultivated also in pot utilizing a substratum, as previously said, with addition of sand or of agri-perlite, in order to improve the drainage, to be placed, in winter, in a place as luminous as possible and at a temperature of more than 12 °C.

Watering must be regular in summer, but allowing the upper layers of the soil to dry up before giving water again; this must not be calcareous and must be at ambient temperature.

Watering must be reduced in winter.

Fertilizations, with products for acidophilic plants, are to be done from spring to autumn, in the manners specified by the producer, and must be stopped in winter.