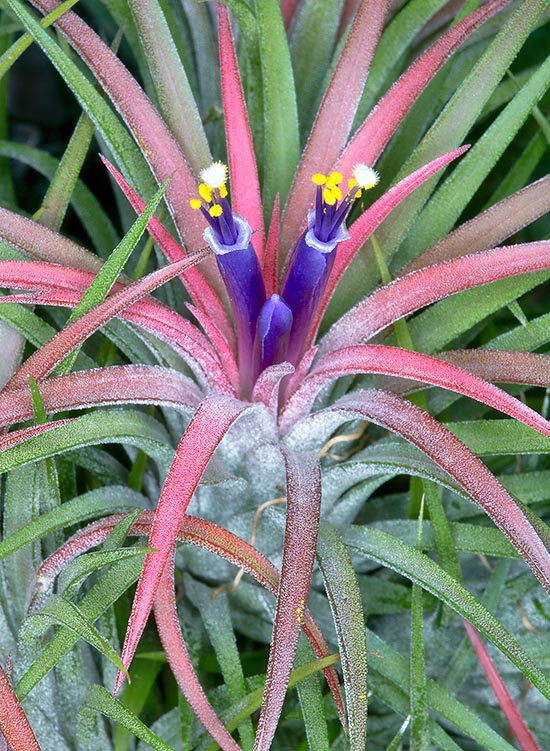 Native to Costa Rica, El Salvador, Guatemala, Honduras, Mexico, Nicaragua and Panama, Tillandsia ionantha is a monocarpic epiphyte, i.e. fructifies once only. But before dying, besides seeds, generates a big tuft of rosettes from axillar buds among the leaves © Giuseppe Mazza

The genus is honoured to the Swedish physician and botanist Elias Erici Til-Landz (1640-1693); the specific name is the combination of the Greek terms “ἴον” (ion) = violet and “ἄνθος” (anthos) = flower, with reference to the intense violet colour of the flowers.

The Tillandsia ionantha Planch. (1855) is an evergreen herbaceous species, monocarpic (bears fruits only once then dies), acaulescent, epiphytic, with a rosette of several arcuate leaves, widened at the base and pointed at the apex, 5-6 cm long and 0,5 cm broad in the median part, of green colour and densely covered by tiny grey scales; the central leaves at the moment of blooming turn to intense red.

Sessile inflorescence at the centre of the rosette with 2-4 flowers subtended by about 2 cm long bracts, 1,5 cm long sepals, lanceolate, tubular corolla, 4-5 cm long, white at the base, intense violet at the apex, with prominent stamina; the flowers are pollinated by the hummingbirds.

The rosette that has bloomed does not die shortly, as is the case of other species, but continues to vegetate for long time helping to feed the new plants that come out from axillar buds among the leaves, forming quickly thick tufts. The fruits are 3 cm long trivalvular capsules, containing numerous thin seeds equipped at the extremity with a tuft of hairs that facilitates their dispersion throught the wind. It reproduces by seed, but usually and easily by division when the young plants have reached a height equal to that of the mother plant.

One of the most popular species due to the contained dimensions and the easy cultivation, particularly suitable for those intending to begin the cultivation of this particular typology of plants. Cultivable in open air in the tropical, subtropical and marginally temperate warm climate zones, as resisting for short period, if dry, to temperatures around the 0 °C, in full sun, that enhances the colours, or filtered sun light, directly on trees or shrubs, like in the wild, or fixed on pieces of bark, branches, or cork and hanging from suitable supports. 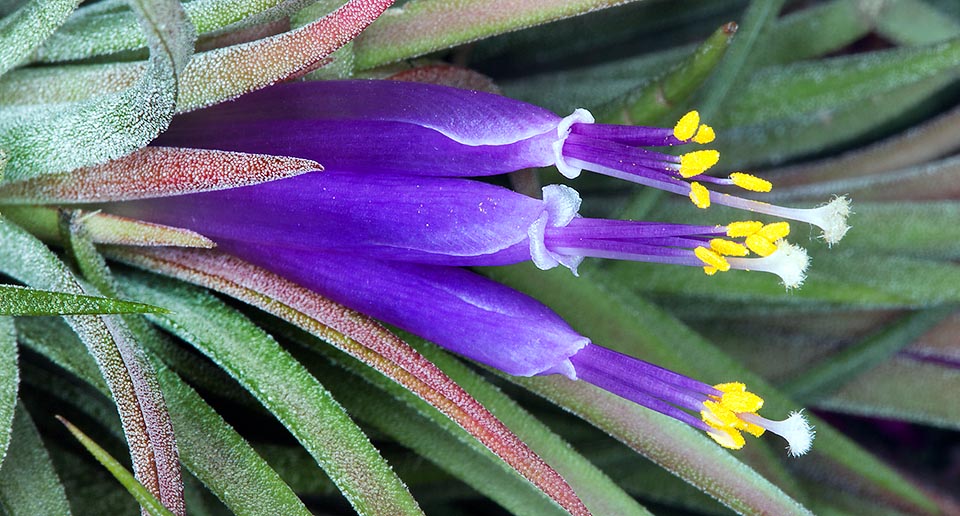 As the showy colour of the flowers suggests, the pollinators are birds and in fact Tillandsia ionantha is pollinated by the hummingbirds © Giuseppe Mazza

It can stand periods of drought, but grows at the best if in summer in the dry climate zones is periodically watered and nebulized in the morning, in order to allow the plant to dry up, utilizing non calcareous and chlorine free water at ambient temperature. Useful are, during the vegetative period, monthly fertilizations with hydrosoluble balanced products at half the dosage suggested by the producer. In the less favourable climates it may placed to winter in a flat during the coldest months, anchored to pieces of branch, bark or cork, avoiding any type of loam that would cause easily rottennesses, in aerated ambient at the maximum possible luminosity, such a window facing southeast to southwest, and with lowest temperatures preferably not under the 14 °C.

If the air of the ambient where it stands is too dry, in the warm and sunny days are to be done short nebulizations in the morning, with the previously indicated modalities, so as to allow the plant to be perfectly dry by the evening and without water stagnations at the axil of the leaves.