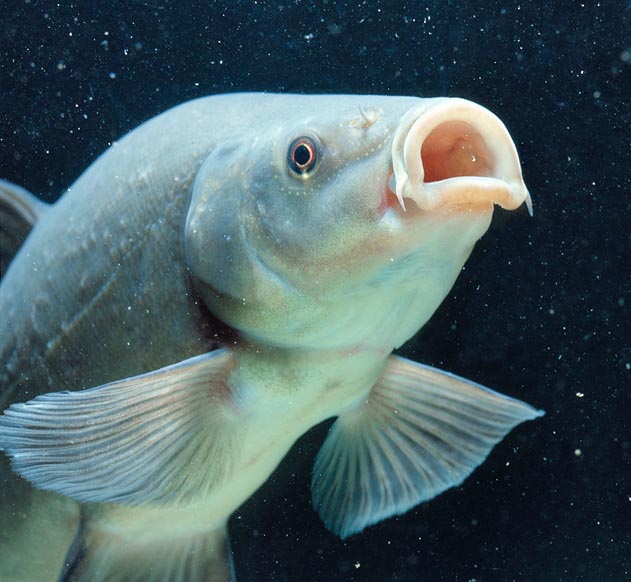 The Tench (Tinca tinca Linnaeus, 1758) , freshwater bonyfish (Osteichthyes), afferent to the family of Cyprinids (Cyprinidae), order Cypriniforms (Cypriniformes), order formed by hundreds of species of essentially freshwater fishes), is an animal typical of the continental European waters, Italian in particular, present, with other congeners, also in western Asia.

Though less important than the breeding of the carps, also the breeding of the Tench in pisciculture is fairly diffused. It is done chiefly in the rice paddies, where this cyprinid and its congeners do reveal as much useful in the biological struggle, destroying great quantities of larvae of insects pathogenic for the rice.

Unfortunately, the flesh of the Tinca tinca and of the similar species is not very tasty, due to its strong smell of mud, due, as we shall see, to the modality of nutrition characterizing them, but in western Asia, where the farmers and the rice growers do not have much to eat, it is regularly eaten.

The Tench (Tinca tinca) is spread in the rivers and the ponds of most of Europe and western Asia. In Italy it is found, in abundance, all over the peninsula, Sicily included, notoriously poor of Cyprinids (Ciprinidae). It seems, on the contrary, that it is absent in Sardinia.

It lives in the calm and stagnant, or with very weak current, waters, of rivers, lakes and ponds. They are mostly found in the muddy and rich of vegetation bottoms, where the water remains fairly warm and poor in oxygen. Their alimentary ecology is chiefly based on small aquatic animals (molluscs, crustaceans, small fishes, aquatic insects and larvae of them) which live interred into the slushy and muddy bottom. These fishes plunge there their muzzle, moving it for getting the food they look for, and in the mean time they sick up remarkable quantity of it, and this explains the unpleasant taste of their flesh.

The dimensions of the Tench, which, as already said, is one of the most common cyprinids of the European and Asian freshwaters, are fairly big. The total length may exceed the half metre, with 70 cm specimens. 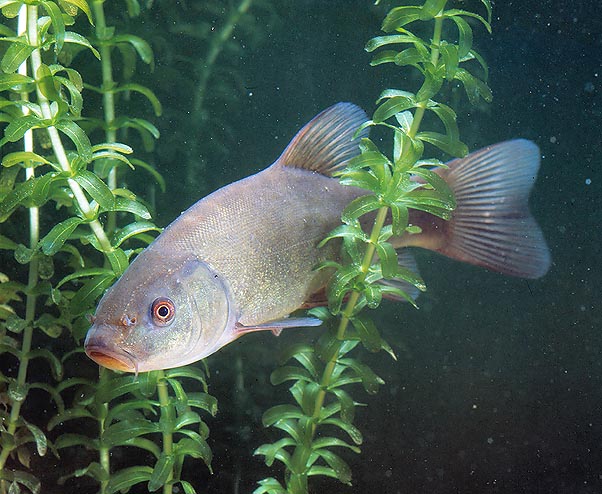 A young tench. When adult it may be 70 cm long and 5-6 heavy © Giuseppe Mazza

The weight varies between the 5 and 6 kg. The body is rather stocky, but not particularly tall. The muzzle is short and blunt, and the caudal peduncle is wide. On the chin, we can see two big and squat barbels. The body is covered by very thin scales, constantly protected by an abundant mucous secretion produced by several subcutaneous glands.

The “pharyngeal” teeth are clavate and placed in series. The dorsal fin, of approximately triangular shape and with rounded apex, is placed slightly behind the first half of the body, towards the tail.

The colouration of the livery in the Tinca tinca is olive, dark on the back, paler on the flanks and yellowish on the belly, like the other congeners, and has no metallic reflexes. The fins are dark olive. However, there are several chromatic varieties of Tinca tinca. One, absent in the Italian freshwaters, is golden red, more or less spotted of black, typical of the freshwaters of western Asia. In Europe and in Italy, besides the specimens with the aforementioned colouration, we may find also lighter individuals, with a wholly yellowish livery, with fins widely reddish coloured at the base.

The permanent sexual dimorphism is rather evident: the males are usually lighter than the females and have ampler pair fins. Furthermore, they have a more massive bone structure and the second ray of the ventral fins, thicker, is “spiniform”.

The Tench (Tinca tinca), like its congeners, is a very prolific fish. The females, in fact, lay many eggs, even three hundred thousand per year; they remain stuck to the bottom vegetation, in order to be fecundated by the sperms of one or more males. The vulnerability index of this species is of 65 over 100.