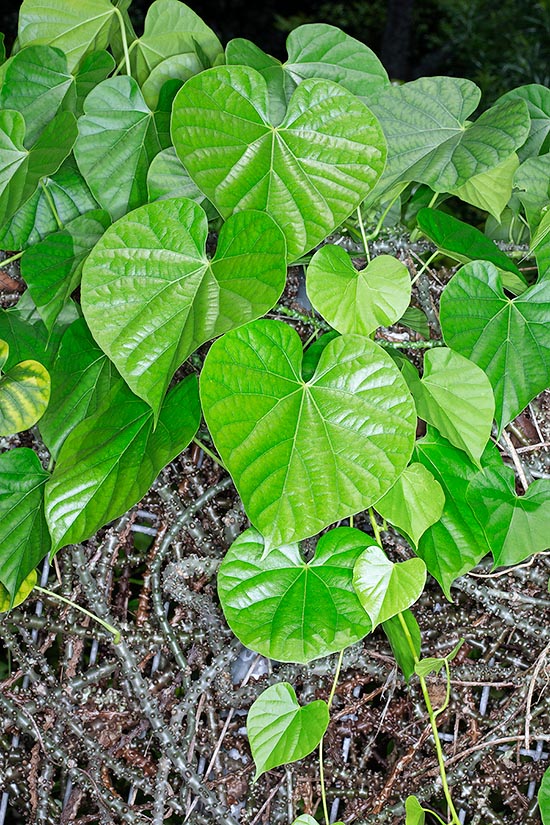 Tinospora crispa is a deciduous creeper of South-East Asia, with up to 15 m stems and 1 cm of diameter. Various employments in traditional medicine. Potential interest in pharmacology © Giuseppe Mazza

The species is native to Cambodia, China (Yunnan), India, Indonesia, Laos, Myanmar, Peninsular Malaysia, Philippines, Singapore, Sri Lanka, Thailand and Vietnam where it grows in te open forests and in the thickets, up to about 1000 m of altitude.

The etymology of the generic name has not been specified by the author, but it is thought to be coming from the combination of Laurustinus (Viburnum tinus L.) and of the Greek substantive “σπορά” (sporà) = seed, with reference to the endocarp; the specific name is the Latin adjective “crispus, a, um” = ruffled, wrinkled, with reference to the warty stems.

The Tinospora crispa (L.) Hook. f. & Thomson (1855) is a deciduous dioecious creeper with stems, 3-15 m long, that with the time get bigger, up to 1 cm of diameter, with greenish brown coloured bark covered by tubercles and from which develop long and thin aerial roots that take root once reached the soil. The leaves, on a 6-18 cm long petiole, are simple, alternate, oblong-ovate with long pointed apex, cordate base and entire margins, glabrous, 7-15 cm long and 5-12 cm broad, of intense green colour above, paler below. Axillar racemose inflorescences that appear before the leaves, the male ones, 5-20 cm long, have flowers with calyx formed by 6 sepals arranged in two verticils, the outer ones ovate and 1 mm long, the inner ones obovate, about 3 mm, of greenish yellow colour, 6 obovate petals, 1,5-,5 mm long, and 6 stamina. Female inflorescences, 2-6 cm long, having flowers with calyx and corolla similar to the male ones, 6 staminodia and ovary formed by 3 carpels. The fruits are oblong drupes, 1-2 cm long, of orange or red colour.

It reproduces by seed, but usually and easily by portions of stem that root easily.

The stems, in primis, and the leaves are amply utilized in the traditional medicine for various pathologies, in particular as antipyretic, antimalarial, diuretic, anthelmintic, in the diabetes mellitus, in the skin diseases and as tonic. Studies on laboratory animals have shown in the stem extracts antioxidant, hypoglycemic and hypocholesterolemic properties of potential interest in pharmacology.

→ To appreciate the biodiversity within the MENISPERMACEAE family please click here.