The Giant tun (Tonna galea Linnaeus, 1758) belongs to the class of the Gastropoda, molluscs whose name indicates that the position of the viscera (gastèr = stomach) is over the locomotor system (podòs = foot), to the order of the Littorinimorpha and to the family of the Tonnidae whose genus “Tonna” gathers light shells having a pot-bellied appearance.

The name of the genus is of Germanic or Celtic derivation: “tunnō” and “tunel”, indicated respectively, in these old languages, the cask or small barrel, to which the rotund shell may resemble. Also the species “galea” only confirms this characteristic, comparing the exoskeleton of the gastropod to the round leather helmet of the ancient Romans.

Also in the Italian language the term Doglio (its name in Italian) or Dolio associates the look of the shell with a big clay pot used in the antiquity.

The mollusk lives in the sandy sea beds of the Atlantic Ocean and of the Mediterranean. In the last one it is present, with populations that are increasingly rarefying almost everywhere, whilst in the Atlantic its presence is reported in the Caribbean zone, around the Canary Islands, Madeira and Cape Verde and, patchily, on the western African coast, from Morocco to Angola.

The Giant tun loves the soft, sandy and muddy sea beds, bare or colonized by marine phanerogams, inside which it stays usually buried during the day. Its presence, in the daytime hours, is at times denounced by a hump that protrudes from the substratum, from which the mollusk gets out, with the favor of the darkness, to devote to hunting. The depths where it is easier to find it vary from the 20 and the 120 meters, even if in the lesser bathymetry is less and less present due to the man’s catches. 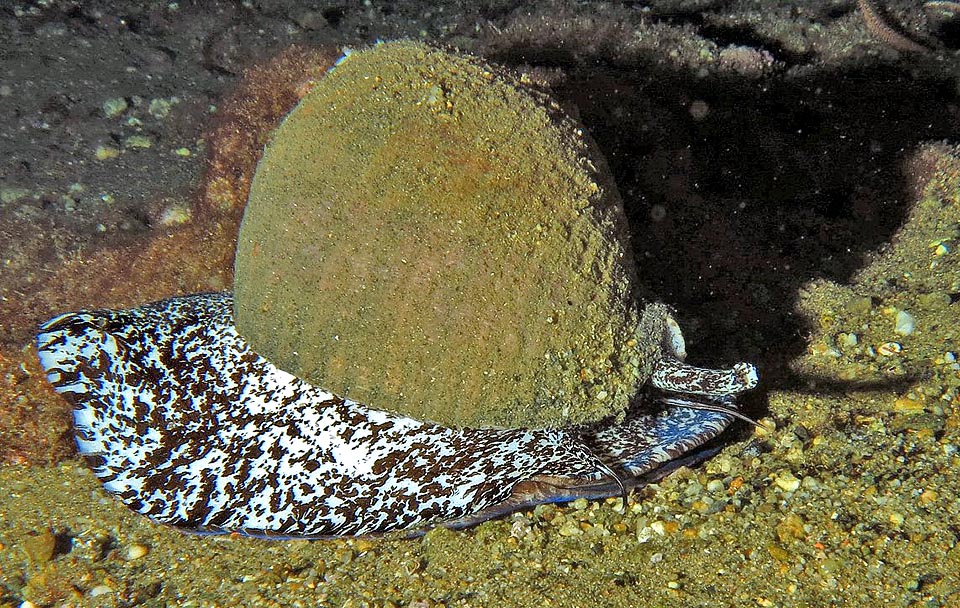 Present in the Mediterranean and in various sites of the Atlantic, the Tonna galea is a carnivorous gastropod that moves on soft, sandy and muddy sea beds, between 20-120 m of depth. The foot is whitish with dark spots or stripes. To deter the aggressors, the body, devoid of operculum, can swell up to 50 cm of length per a width of 30. The siphon, endowed of olfactory organs, visible over the tentacles, carries the water to the gills and localizes the presence of preys or of a partner © Sebastiano Guido

The potbellied shell is very broad and honors the various names under which it is designated by the riparian populations.

To the remarkable size of the shell, that in some specimens may exceed the height of 25 centimeters, does not correspond an adequate thickness of the shell that, though reinforced by a profile with ribs, is rather fragile. The rear part of the exoskeleton, that shows clearly the logarithmic growth of the spires, has a very limited, or even non-existent projection in some specimens. The fore opening is ample, tending to oval, whilst all the shell is run by alternate undulations, almost parallel to each other, that sculpt it longitudinally with grooves and ridges similar to a Doric column. The color of the armor varies from dirty white to reddish brown, and gives more evidence to the structure of the shell, being the incisions usually paler.

The fleshy mass has a whitish color, from which emerges a galaxy of speckles and stripes fringed of black or dark brown, irregularly arranged. The body has no operculum and may considerably increase its own volume (up to 50 cm of length per 30 of width) absorbing water with the aim of scaring possible aggressors.

The disproportion between the mollusk and its shell is so much marked to leave in disbelief most of the observers, about the possibility of the gastropod to retreat in its shell. The most voluminous part of the body mass is the robust foot, with a wide sole, on which the mollusk crawls walking on the seabed. Over it the visceral sac penetrates, spirally wrapped, into the shell.

From the fore zone of the head protrude two thin tactile tentacles that have at their base the eyes. Over the tentacles we note a showy very mobile siphon equipped with olfactory organs and below stands the mouth, like a proboscis, that has an ample dilating capacity. It incorporates, dragging them inside, also big-sized preys, as big as the mollusk, perhaps immobilized and killed by the acidic juices coming from some glands of the intestine, that then assimilates with a slow suction. 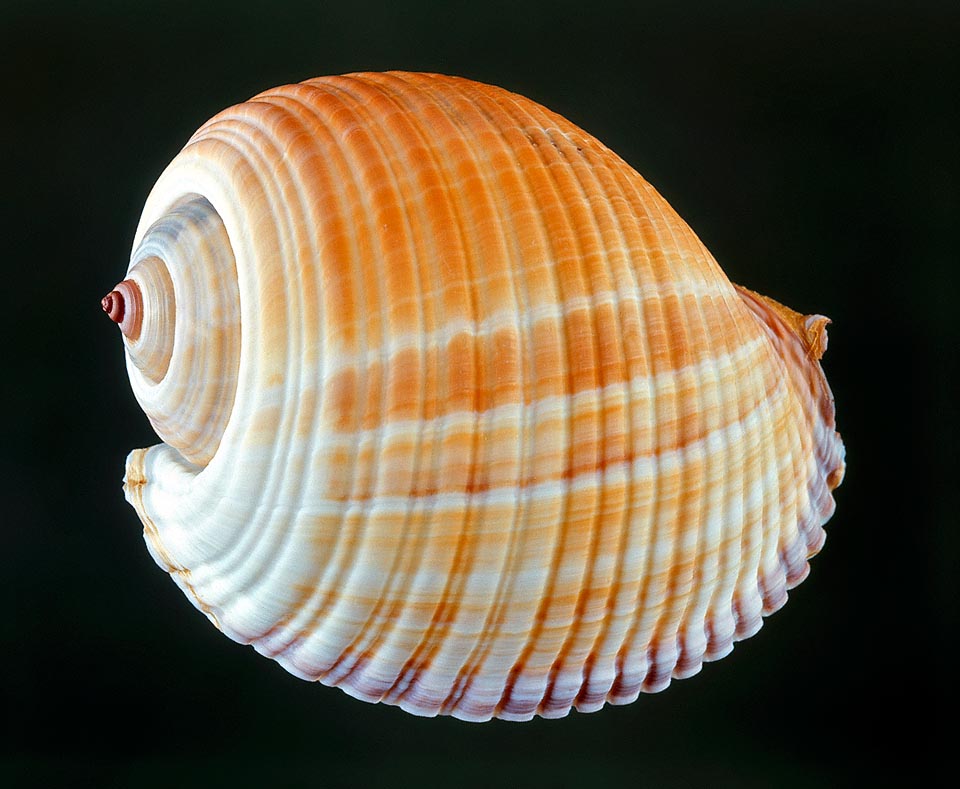 The elegant shell of the Tonna galea, potbellied and broad but little thick and relatively fragile, can exceed the 25 cm of height. The collectors and the tasty flesh of the mollusk contribute, in spite of the laws, to the drastic reduction of its presences. Also for this species the main predator is once again the man © Giuseppe Mazza

The end of the summer marks also the beginning of the reproductive period of the Tonna galea, during which the animal, moving during the night on the seabed, lays a thin egg ribbon of a delicate pinkish color.

Unlike numerous other mollusks that proceed circularly while emitting the eggs, thus building concentric strips, the Giant tun proceeds in a straight line or almost as such; the result is a straight, slightly undulated, festoon whose width varies from the 30 to 50 eggs; it can measure about 20 or 30 centimeters, with a length that often reaches the meter. As a consequence the deposition can contain from 4000 to 8000 eggs, kept together by a whitish mucus that probably has antiseptic properties, repellent for the possible predators and, perhaps, nutritive for the progeny to come.

The eggs will hatch in little more than 30 days, generating larvae that will wander in the plankton for 6/8 months. After this period, the survivors will rest on the seabed beginning their life as young gastropods. In this new existence their habits will be mainly nocturnal. Helped by the darkness, they will get out from the substrata that have protected them during the day to catch their usual preys: holothurians and bivalves. In a lesser extent will be preyed also other echinoderms such as sand starfishes or sea urchins, small gastropods, crustaceans and even fishes sleeping on the seabed.

Main defense and offense weapon is a saliva containing the sulfuric and aspartic acids, utilized for killing the preys or for holing their shells. As for most of the animals, the most bitter enemy of the Giant tun is the man, who picks it up from the sea beds to consume its flesh, of tasty flavor, and seize the shell, coveted by collectors. Despite the protection given to it by the Berne Convention for the conservation of the natural European habitats and of their inhabitants, it is not rare to still find it in many markets, whilst it is less and less available in nature.