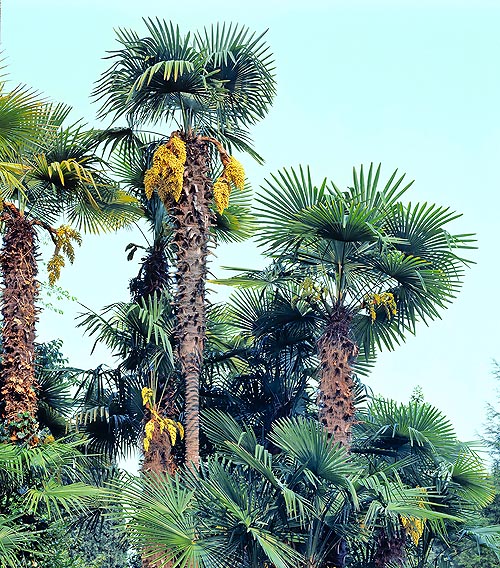 The name of the genus comes from the combination of the Greek words “trachys” = rugged and “karpόs” = fruit.

The name of the species is honoured to the Scottish botanist Robert Fortune (1812-1880).

The Trachycarpus fortunei (Hook.) H. Wendl. (1861) is native to a vast area spreading from central China to northern Myanmar, where it grows in humid woody areas up to more than 2.200 metres of altitude.

This splendid palm has a characteristic solitary trunk, thin (about 20 cm of diameter) and tall up to about 10 m, covered by a thick coat of brown-grey hair and by the remains of the foliar petioles. The leaves of the Trachycarpus fortunei are palmate, of dark green colour on the upper page and slightly greyish in the lower one. Usually, they reach the 90 cm of length, and are cut for about one half of their length in thin segments, usually hanging. The petiole, long about 80-90 cm, is just indented on the margins. 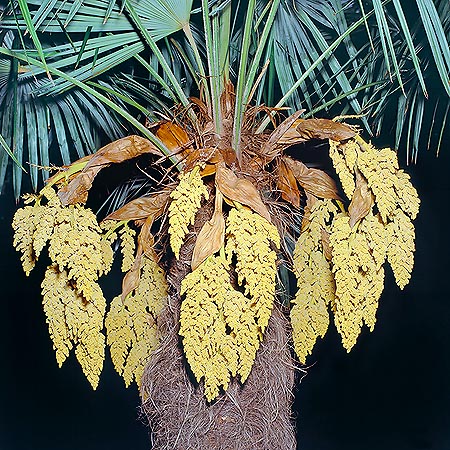 It is a dioecious plant, that is, with separated sexes: each individual carries only male or female flowers. But, at times, it is polygamous: that is, the plant itself carries, at the same time, both hermaphrodite flowers and unisexual ones.

The inflorescences are produced among the leaves (interfoliar). They are short and much ramified, of an intense yellow colour. The fruits are reniform, black and covered by a bluish waxy patina, and are about 12 mm long. The plant easily reproduces by seed, which germinates in about 3 months.

Due to its well known resistance to the low temperatures (around -15 °C) and its fast growth, it is the most diffused palm in the cold-temperate climate regions all over the world.

In certain areas, particularly suitable from the point of view of the humidity, the Trachycaspus fortunei has even become spontaneous.

In China, the fibres taken off from the trunk have several utilizations in the local handicraft.