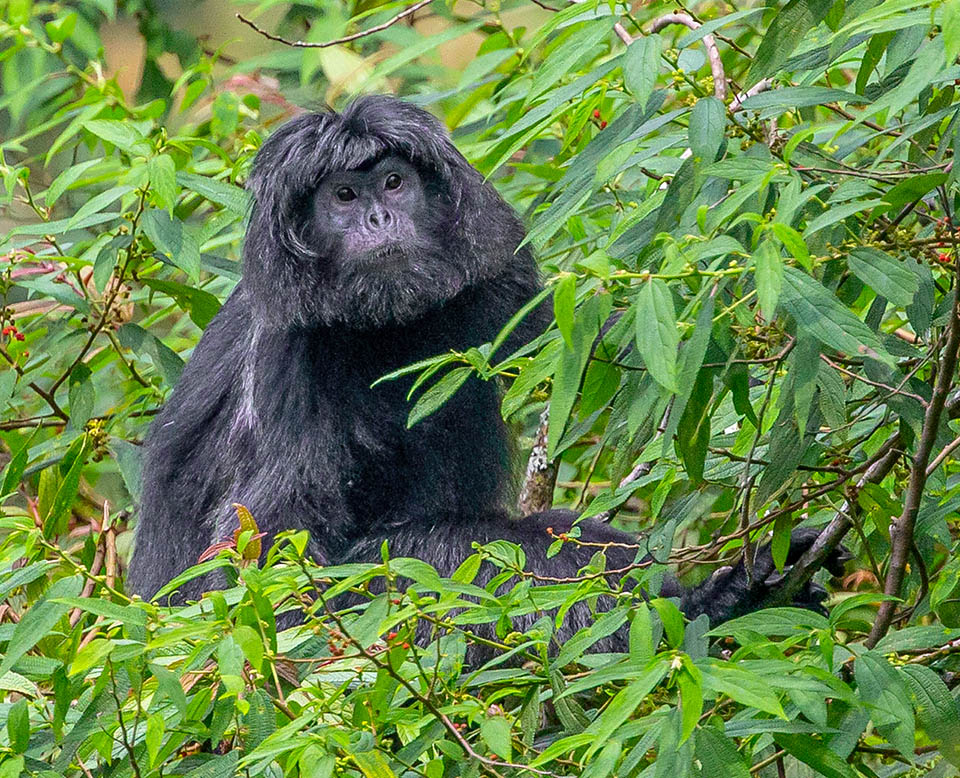 Trachypithecus auratus (E. Geoffroy Saint-Hilaire, 1812) is a primate of the Old World belonging to the family Cercopithecidae, subfamily Colobinae. It is known as East Javan langur or Ebony lutung, as well as with the local names of “Lutung” and “Budeng”.

The generic term Trachypithecus comes from the old Greek “τραχύς” (trakhus), scabrous, uneven and from “πίθηκος” (pithecos), monkey; the specific terms auratus gets its origin from the Latin “aurum”, gold, with reference to the intense orange mantle having shades tending to yellow.

In accordance with what is reported in the Red List of the International Union for Conservation of Nature (IUCN), Trachypithecus auratus is a species considered as vulnerable due to human activities. It is listed in the appendix II CITES (Washington Convention in International Trade in Endangered Species of Wild Fauna and Flora threatened with extinction) and protected by the Indonesian laws since 1999. 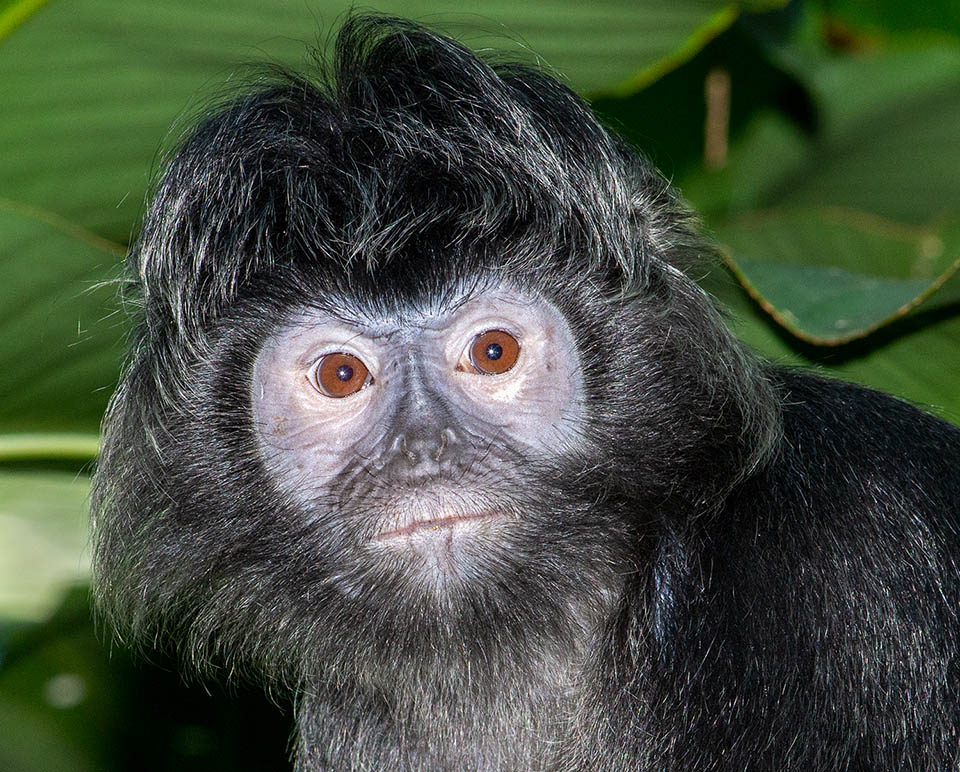 Although the specific names indicates a golden colour, both sexes adults have glossy black mantle with brownish shades around the face, on the sides and the legs © Giuseppe Mazza

Hunting, degradation of the habitat and the trade of the wild species in the traditional and modern markets expose this primate to continued pressures, causing a real decline of the populations. In fact it is estimated to have decreased by 30% during the last 36 years.

Trachypithecus auratus is a primate endemic to Indonesia. It is present in the islands of Java, Bali and Lombok. 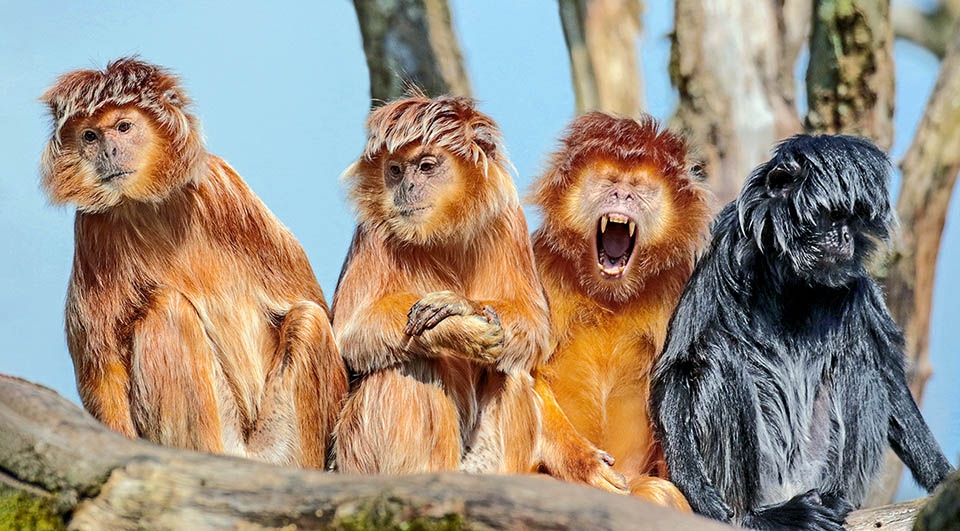 The adults maintaining the juvenile golden colouration are fairly rare. Over time however their mantle darkens on the back © Safi Kok

The two subspecies of the Trachypithecus auratus are quite similar in their appearance. The adults may reach a weight of 7 kg, with an average length of the body of 55 cm. The long tail, characteristic of the subfamily they belong to, may measure up to 87 cm.

The adult individuals present the skin of the face bluish or black, surrounded by hair straight and curled ahead; with ears having little white or yellowish tufts. The jaws are ample.

Two are the main colourations of the body: the lost common if the colouration of the mantle of a glossy black, with a light shade brown (especially on the belly, the sideburns and the tails). The hair is slightly pointed on the limbs, on the head and on the sides, and at times on the back. The palms of the hands and of the feet and the face are paler black. 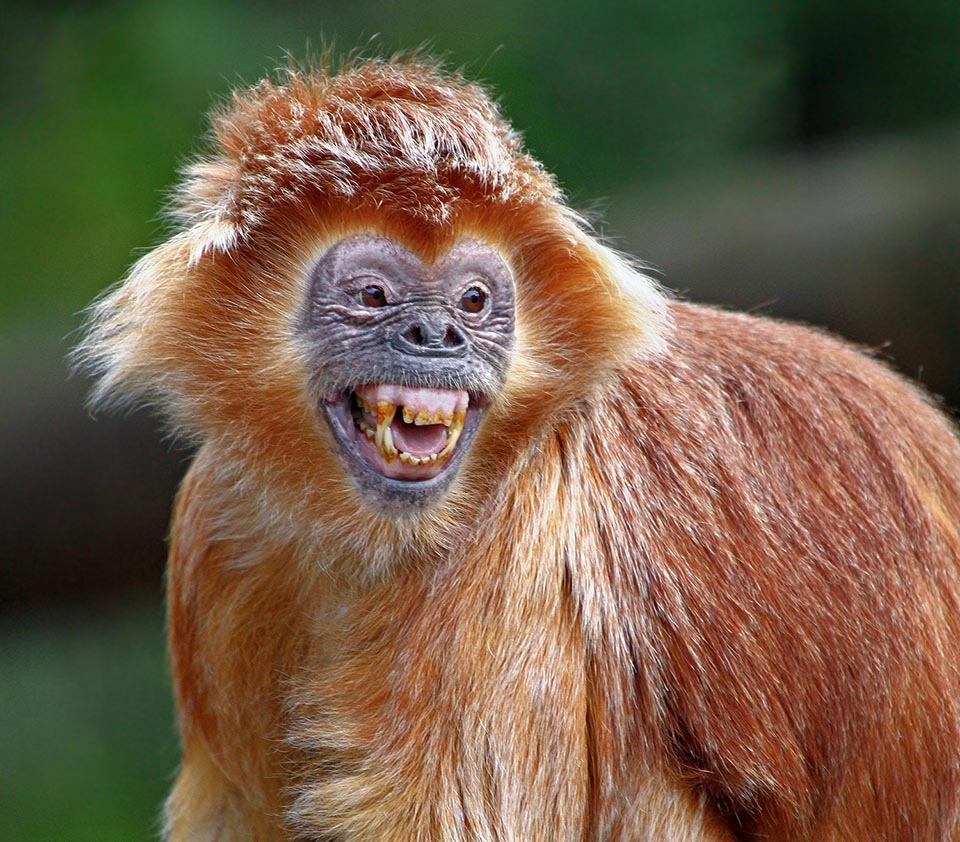 The other colouration, rarer, is of an intense orange, with shades tending to yellow on the belly, on the limbs and on the ears. These individuals often have a black fringe on the back, with the palms of hands and feet of the face completely or partially depigmented.

The females differ from the males because of the paler pubic spots, of yellowish colour. The young have the hair completely orange, with paler skin in the face and in the extremities; these get darker while growing.

The environmental factors determine morphological differences within the same species due to the geographical distribution: an example is the shape of the body and of the skull that get bigger moving eastwards within the distribution area. Moreover, some populations of Trachypithecus auratus auratus present a particular polymorphism, that is melanistic individuals that maintain the juvenile mantle also when mature. 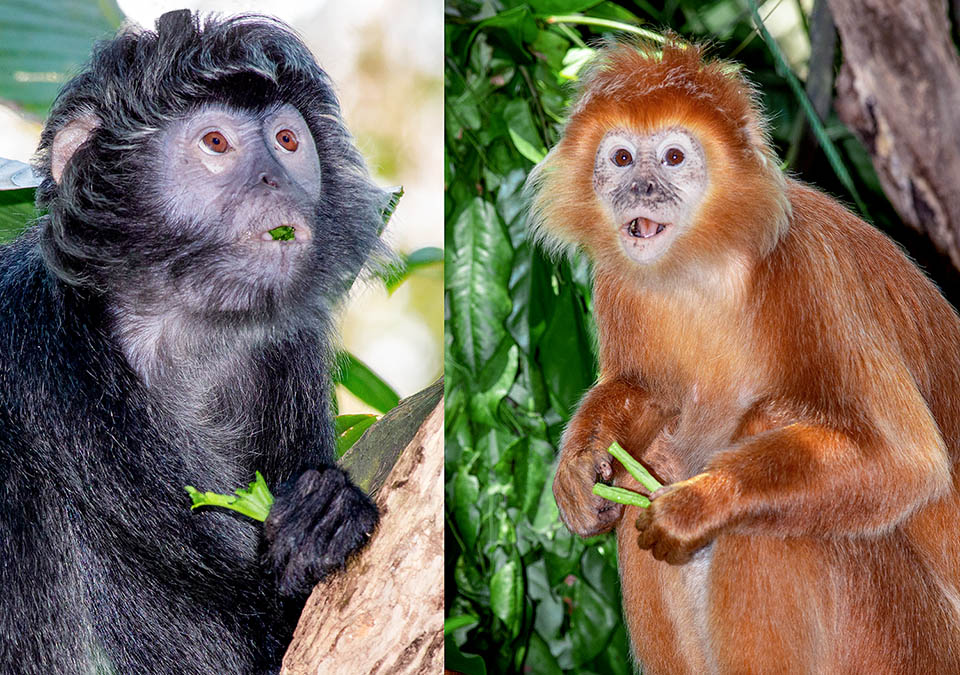 Trachypithecus auratus shares almost completely its own range with Trachypithecus cristatus, present also in other Indonesian islands, Sumatra and Borneo.

Trachypithecus auratus prefers mountain environments with primary forests (that is, forest characterized by a complete cover and, usually, by many layers of undergrowths) and secondary forests (that is forest characterized by a less developed cover and by a thick undergrowth). Conversely, Trachypithecus cristatus occupies mainly lowland forests close to rivers, peat swamps, mangroves and coastal areas. However, it too can be found in primary and secondary forests at an altitude of 600 m above sea level. 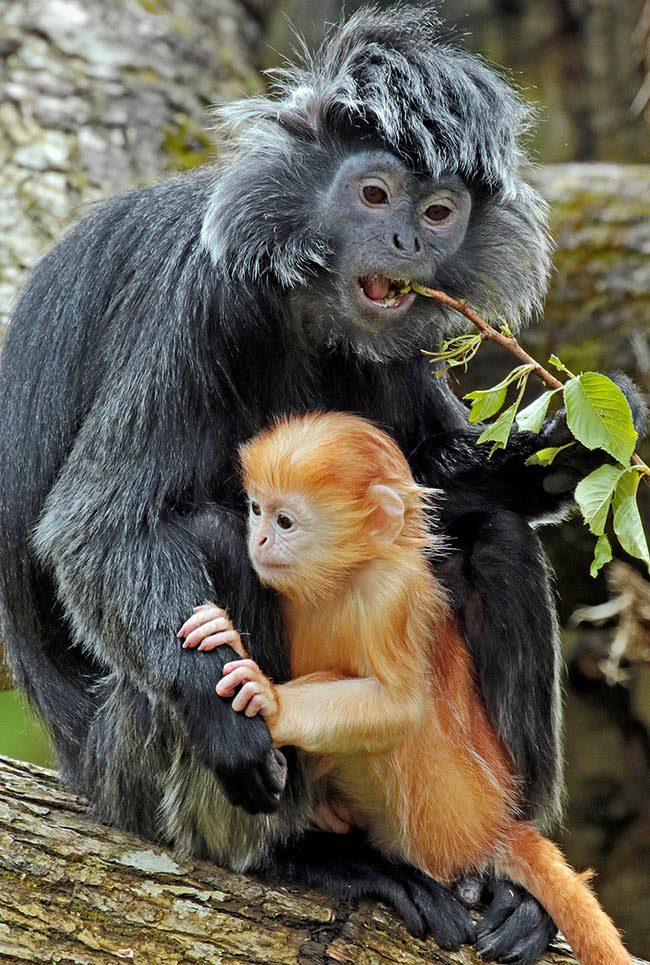 Mother and son. Females begin to reproduce when 3-4 years old and give birth to only one baby at a time © Safi Kok

The habitat extent differs depending on the locality and varies from 2,5-8 hectares to 20-30 m, with slight overlaps between territories of different groups.

Trachypithecus auratus is a diurnal and arboricolous animal.

Its diet, mainly vegetarian, includes leaves, fruits, flowers, buds and is integrated with larvae of insects.

A characteristic typical of the colobi is the multi-chambered stomach, with specific microorganisms that facilitate the cellulose breaking off so that the vegetal material is digested more effectively. The jaws are ample and the shredding of the food takes place with specialized teeth and is assisted by the large salivary glands.

Trachypithecus auratus lives in groups formed by many females and by one adult male (one-male – multi female organization), a certain number of immature males, young and small).

Most individuals are females, because these ones remain in the native group after the sexual maturity.

Conversely, the males leave their own group just before reaching maturity and at times may create groups formed by only male individuals.

The number of individuals in each group, which can vary from five to twenty or so, is frequently formed by 7-9 individuals.

The consistency of the group differs between the areas with different climatic conditions.

The presence of only one adult male affects the reproductive behaviour.

There is no competition between males within the group and this ensures the maximum reproductive success.

The East Javan langur does not present any reproductive seasonality and therefore mates throughout the year. The females begin to reproduce when about 3 or 4 years old and give birth to only one baby at a time.

The mating phase can involve three fundamental steps: the courting, a possible refusal and the copulation.

Courting is done by both sexes: the female shakes the head, shows the male the anogenital area, places the body in upright position lifting the foreleg

The shaking of the head by the female is a signal for attracting the male’s attention and is an indicator of the beginning of the reproductive activity. 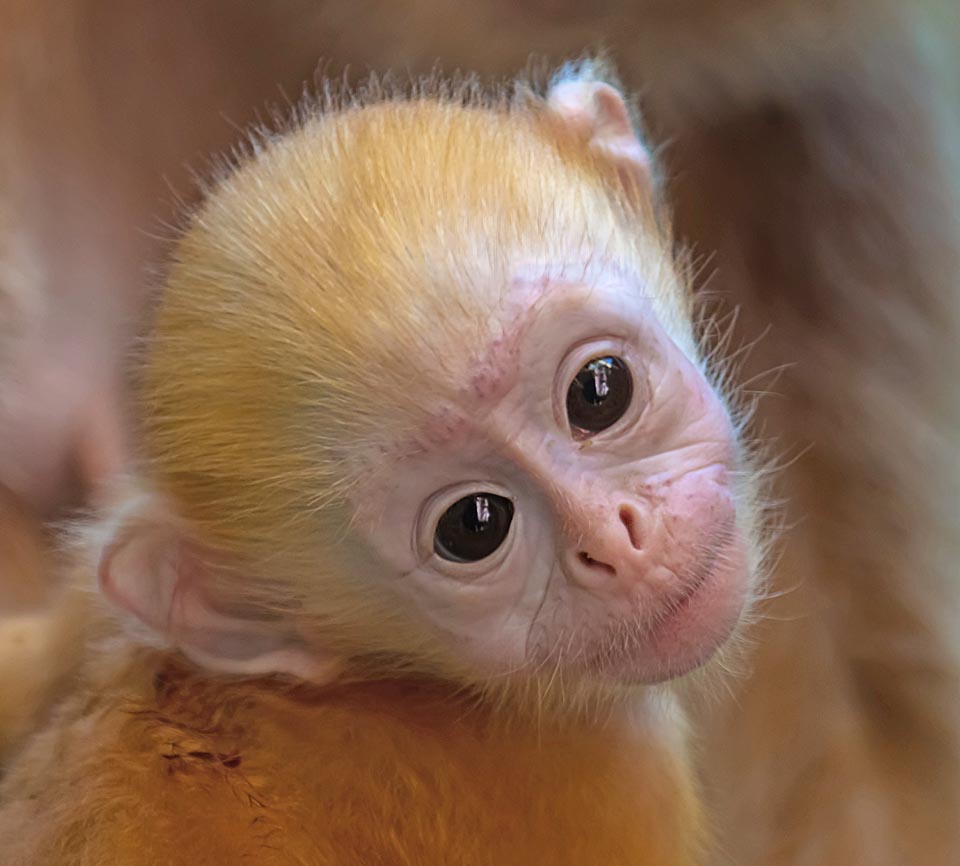 Kiss-curl pup. The yellow orange colour renders it well visible among leaves and ensures him a better control and protection by all adult females of the group © Regina Hoenes

The male shows only the behaviour of genital inspection of the female. The refusal, done by the female and/or the male, may take place while courting. This passage is characterized by an agonistic behaviour and by a specific motor pattern, that is a jump. Finally, the copulation occurs by leaping, very common in the family of the Cercopithecids.

The females take care of their own progeny and in the meantime collaborate in parental care of all the young of the group (allomothering); conversely, they are very aggressive towards the females of other groups.

The yellow orange colouration of the babies renders them more visible and therefore guarantees a better control and protection by the adult females. 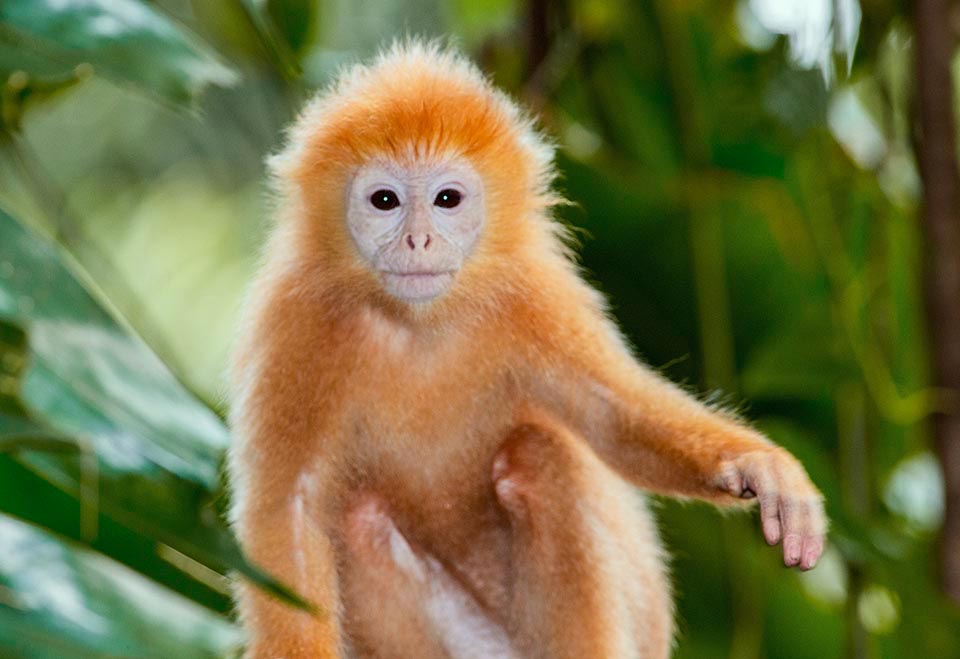 A young. The East Javan langur has robust hands with long fingers for a good grip in the branches, but the thumb, decidedly small © Giuseppe Mazza

The Trachypithecus auratus uses visual, tactile and vocal stimuli for communicating with the other individuals. The alarm vocalizations, which sound like “ghek-ghok-ghek-ghok”, serve to alert the group about the dangers.

The hair cleaning (“grooming”) is utilized for reinforcing social relations. The aggressions manifest themselves with physical interactions and by means of visual and acoustic signals in order to establish the social rank.