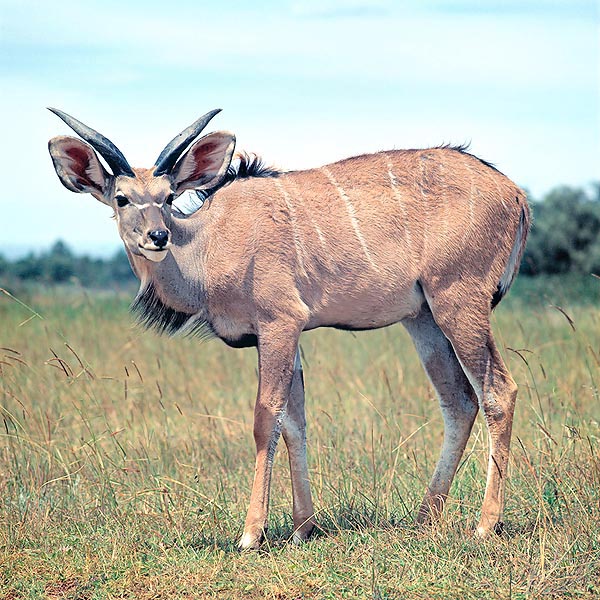 Young Tragelaphus strepsiceros male. Its horns will be the nicest in Africa © Giuseppe Mazza

The well-known Greater kudu (Tragelaphus strepsiceros Pallas, 1766) is one of the most beautiful and elegant antelopes of the African continent.

It belongs to the order of the Artiodactyla, to the family of (Bovidae), tribe of the Tragelaphins, word used by the African biologists in order to indicate animals with hooves placed laterally absent or much reduced such as the Lesser kudu (Tragelaphus imberbis), the Nyala (Tragelaphus angasii), the Mountain nyala (Tragelaphus buxtoni), the Bushbuck (Tragelaphus scriptus), the Sitatunga (Tragelaphus spekii) and the Bongo (Tragelaphus euryceros).

In terms of description, the Greater kudu is the tallest antelope, with the exception of the huge elands which may get close to the ton of weight. But, compared to a height of 135-150 cm at the shoulder (in the males), we are facing a much slender animal with the long legs, whereby the weight rarely exceeds the 340 kg, keeping, as an average, within the 270-280 kg for what the male is concerned and the 170-220 kg for the female, which has, in turn, at the withers, heights of 110-140 cm.

A surprising characteristic, furthermore, is the size of the foot which leaves a trace, shaped like a coffee bean astonishingly small if compared to the mass, and much more reduced than that of even less weighing antelopes. An oryx, for instance, leaves traces of 10-12 cm (heart-shaped), whereas the trace of the Kudu is of only 5-7 cm. The horns are present in the males only and stand among the longest in the antelopes, with a development which may reach the 180 cm and an average around the 120 cm, and an unmistakable corkscrew shape, which places them amongst the most beautiful and imposing of the animal kingdom. Also the shape has interesting variations, often, but not necessarily, in relation with the environment. The variables of the Kudu horns are basically two: divarication, considering the divergence of two lines following the direction of the horns, and twists.

Let us imagine two springs: the first variable will be the divergence with which we install them, each other, in other words, the angle they form between them, the second variable by stretching more or less the springs. 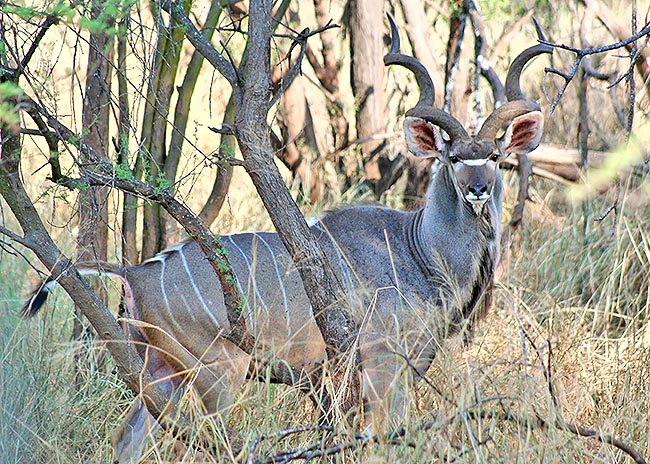 Imposing adult male. They may be even 150 cm tall at the shoulder and weigh 300 kg © Gianni Olivo

In the first instance, we shall have an apparently greater length of the springs, even if the actual development is the same, in the second case, we shall have two springs looking shorter, but with closer and ampler twists.

For what is my own personal experience, the first typology is associated to less thick habitats, whilst animals living in the more impenetrable areas tend to have twists of the second type.

However, it’s always a statistics, because, in effect, it is possible to find “open” kudus in thick areas and “narrow” Kudus in more open zones.

In whatever species equipped with horns we may find anomalies of shape, at times connected to traumatic events which have conditioned their growth, other times to events of various nature; it is understandable, then that, being the Greater kudu the antelope with more developed horns and with a shape so much characteristic to render it unmistakable, also the abnormalities, if any, will be, often, more showy and at times more bizarre than in other species, as is the case of a young specimen I met, who had horns looking much similar to those of a Mouflon.

The mantle of the Greater kudu is usually grey, blue grey or dark grey, with white striae on the sides (from 4 to 12), which may be more or less evident, there are however specimens tending to the brown or the reddish. On the muzzle, which tends to be darker than the rest of the body, is present a white V-shaped line which seems to connect the eyes, and also the upper lip and the “chin” are white, so much that some specimens seem to be carrying a sort of hoary “beard”.

The male exhibits a mane or beard hanging under the neck, whilst the female does not have the same or has just a hint of it, and in any case with much shorter hairs. 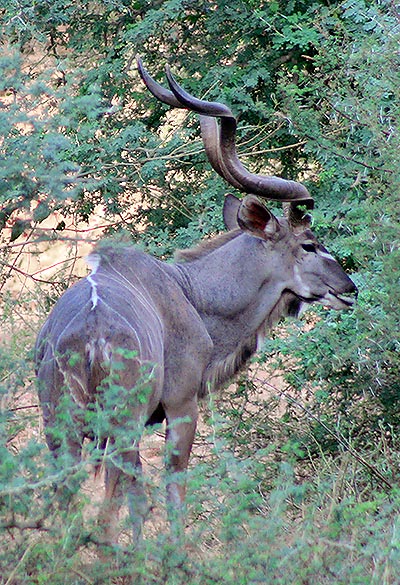 The horns shape depends also on the habitat © Gianni Olivo

The limbs are long and muscled and make it a fast runner: the fore part of the body, more robust, so much that the print of the fore foot is greater than back one, shows its sprinter skills, whilst the “diving” antelopes, like the cephalophes (or duikers = divers), have the rear more developed and often taller, characteristic connected with a different form of self-protection and defence, as, when a danger gets close, the prefer to “dive” in the thicket and immobilize.

As jumper, the Greater kudu has few competitors, and I have seen a lot of times male kudus jumping easily over the game-fences, which measured 220 cm of height, while standing almost still.

The Greater kudu is present in most of the southern Africa, where it’s a common and diffused species, which has well recovered from the decimation made by the outbreak of rinder-pest, happened at the beginning of the last century.

In South Africa, it mainly occupies the Limpopo province and the Mpumalanga, besides the boundary area with the Botswana and several mountain areas (Drakensberg, Waterberg, Soutpansberg, etc.), furthermore, it is found in various enclaves of the zone of the Cape. It is present in almost all the Zimbabwe and in most of Zambia, Mozambique, Malawi and Botswana.

It is found also in the southern half of Angola and in almost all Namibia but the desert strip bordering the ocean: the Namib and the Skeleton coast.

It has happened to me, however, to meet these antelope also in desert zones, while looking for serpents, in small oasis of greenery, such as, for instance, in the zone of the abandoned mines of Kan, along a deserted and long canyon, where I saw also several jumping antelopes or springbocks (Antidorcas marsupialis). It is reported also in an extreme zone south-east of Congo, which enters, like a tip, the Zambia and then good part of Tanzania, Kenya and Uganda, where its diffusion is however more fractioned. In Somalia, Ethiopia and Sudan, its diffusion is smaller and usually it is absent from the arid zone of the Horn of Africa. I sighted some individuals, smaller than the average, also in the extreme north of the Central African Republic, north of Ouanda Djallé and by the boundary with Chad. Someone talks about three species:

Tragelaphus strepsiceros cottoni : the subspecies of Chad and of the western part of Sudan.

Tragelaphus strepsiceros chora : of northern Kenya and of the north-east part of the continent. 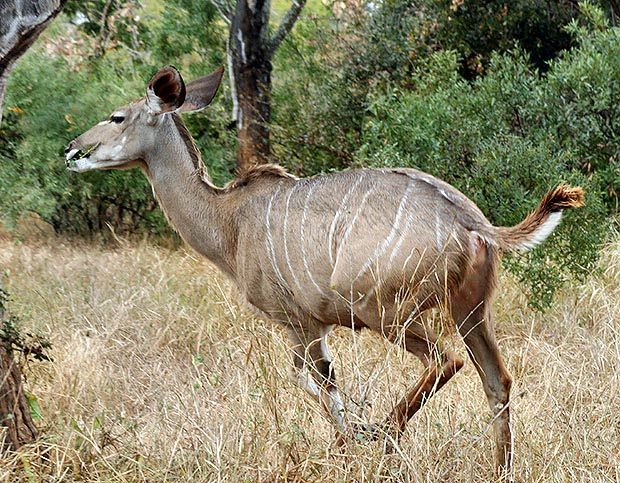 Female of Tragelaphus strepsiceros seen during her meal © Gianni Olivo

The habitat of choice is the bushy and woody one, which offers shelter and protection to an animal which, despite its size, has incredible camouflaging capabilities.

It has often happened to me to observe for thirty minutes, with the binocular, a small portion of bush, and to remark the presence of one or more kudus only because of the light movement of an ear or of a tail.

It does not disdain arid zones, provided with thickets where to take shelter, and is extremely at ease in mountain zones, even if rocky, where it moves with confidence and agility as a climber.

Another characteristic is the capacity to adapt perfectly in anthropized areas, provided there are spots of dense vegetation: often, in such environments, it becomes even more nocturnal, remaining hidden during the day and getting out by the night.

It is in any case, even in calm areas, a partially nocturnal animal, which grazes during the night for almost half of the time dedicated to the food. It is a browser, and I utilize such word as it renders the idea of graze mainly ripping, leaves and vegetal parts of the branches of trees and shrubs. However, at times, it grazes also grasses from the ground, and nourishes of fallen fruits, berries and even flowers; it particularly loves the very green herbs which come out after the bush fires.

It frequents willingly and fairly assiduously the salt pans. Branches and parts of succulent plants may help it to survive also in zones poor of water. Speaking of succulent plants utilized as nourishment and sources of liquids, in some cases, in our zone, I have found wild animals dead, possibly due to the ingestion of poisonous plants, like the succulent known as pig-ears (Cotyledon orbiculata), a very nice and ornamental succulent, very common in the bush of our reserve. This plant contains a toxin which causes a poisoning of which are often victims the domestic animals, known as cotyledonosis. 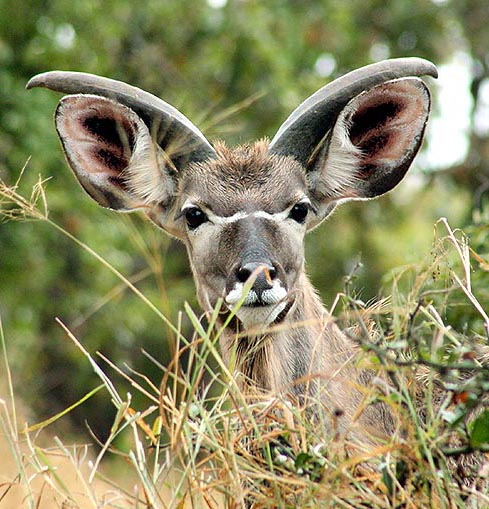 Curious young male. It will leave the maternal herd when two © Gianni Olivo

Curious young male. It will leave the maternal herd when two © Gianni OlivoThe females of Kudu form rather stable groups, which usually include from 1 to 4 or 5 females, with their cubs whilst the males associate in “gangs” of bachelors, often only temporarily, groups which count from 2 to 10 heads, even if, in one instance, I saw 12 males together. At times, a male seems to prefer to stay alone, and it has occurred to me to see, for long periods, single males never associated with others.

The Kudu is not a territorial animal, even if, usually it is quite sedentary; it does not defend, therefore, a territory and, contrary to what is thought by somebody, the fights between males are not frequent, if not in overpopulated areas, where the density is high. A male surveying a female in oestrum may send away a young pretender, imposing itself with a number of postures tending to scare it, and may also engage in a fight if the young does not surrender and does not go away. At times are found, but not very often, the remains of two males which have remained stuck, with their horns, and which have passed away as they have not been able to get free.

In some instances, ritualized fights may be also a form of game for testing the own strengths, but such exercises do not seem to be as frequent as in other species. In any case, in my zone, I found, together with my tracker, the remains of a male Kudu killed by a competitor with the horns, proving that the exceptions do exist also in the animal kingdom.

The Greater kudu reveals some seasonality in the couplings; the female may already procreate when two years old. The gestation lasts, as for the human species, about 9 months and the births happen when the grasses are high, during the rain season. The newborn keeps still and hidden in the vegetation for at least 15 days before following the group, and this even if, practically, it is capable to stand up on its legs one hour after the delivery, and depends from the mother for the nourishment for some months (4-6). The males remain with the maternal group till the second year of age, whilst the females may keep aggregated longer.