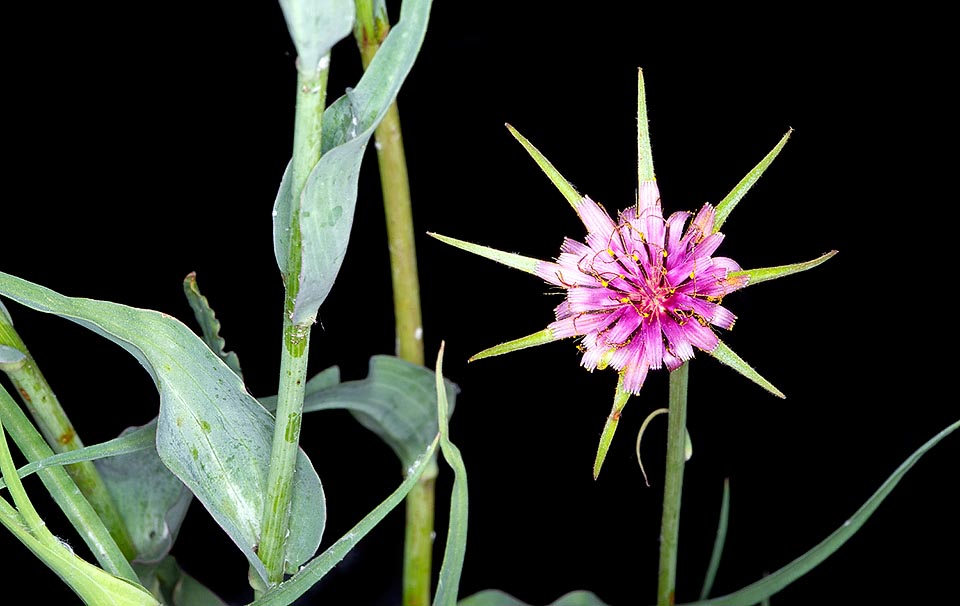 Common in the Mediterranean area, the Tragopogon porrifolius is a bi-annual herbaceous species with milky sap, 0,4-1,2 m tall, having white tap root, 20-30 cm long. Little ramified stem and sessile leaves, alternate, erect, glabrous, thin and pointed, tle lower 15-30 cm long and 2 cm broad, wrapping the stem at the base. The unusual purplish inflorescence lasts several days, opening regularly, after it warmed up at the morning sun, to close around noon. It has been utilized in the past for its ornamental value © Giuseppe Mazza

The plant is native to Africa (Algeria, Canary Islands, Libya, Morocco and Tunisia), Asia (Turkey) and Europe (Bosnia, Bulgaria, Croatia, France, Greece, Italy, Macedonia, Rumania, Serbia, Slovenia and Spain), common in the fallow lands, the roadsides and slopes up to 2.000 m of altitude.

Sequence of the opening of the involucre that protects the ripening fruits, the typical achenes of the Asteraceae © Giuseppe Mazza

The Tragopogon porrifolius L. (1753), is a bi-annual, herbaceous, plant, with a milky sap, 0,4-1,2 m tall, equipped with a white tap root, 20-30 cm long, and little ramified stem with sessile leaves (without petiole), alternate, erect, glabrous, thin and pointed, the lower ones being 15-30 cm long and 2 cm broad, sheathing the stem at the base. 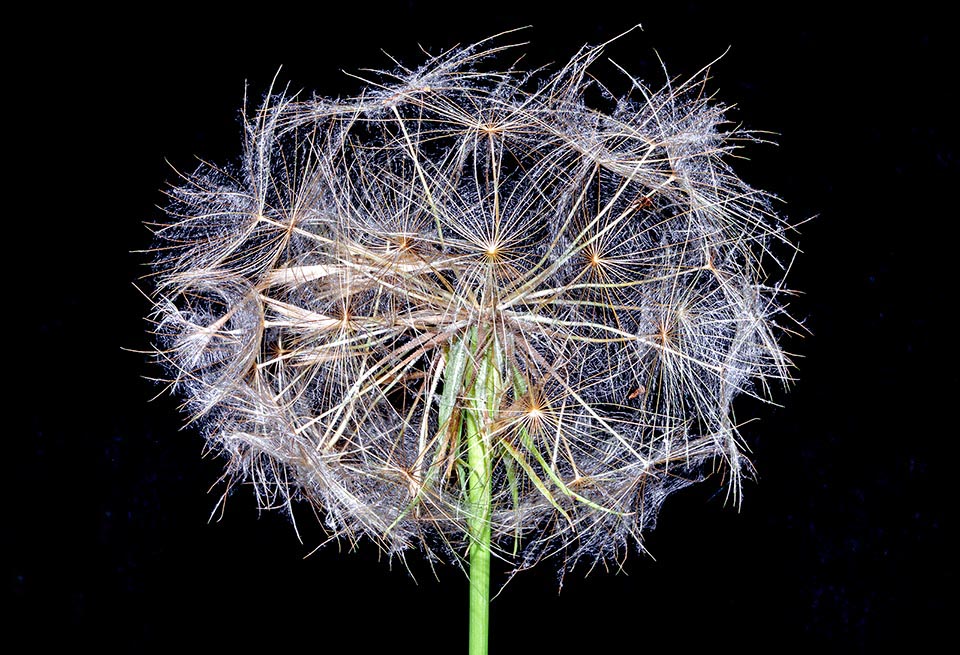 When gets the moment of the dispersion of the seeds, these, starting from the roundish base called receptacle, form a showy globe of 5-8 cm of diameter with the parasols of the achenes, the pappus, ready to disperse them to the wind. The plant easily self-disseminates often quickly naturalizing where it has been introduced © Giuseppe Mazza

Terminal, solitary inflorescence, flower head shaped, of 5-10 cm of diameter, formed by a roundish base, the receptacle, where are spirally inserted 50 to 200 bisexual flowers with a corolla formed by five petals joined together, with truncate and indented apex, of a purple colour. The receptacle, supported by a hollow peduncle, is surrounded by an involucre formed by a series of 6 to 11 linear-lanceolate, sharp, bracts, 3-6 cm long, of green colour. The flower head opens by the morning, in full sun, and closes around noon, for opening again the following morning.

The fruits, containing one seed only and called achenes (or, more properly, cypselae), in the Asteraceae, are fusiform, ridged and tuberculated, 1,2-2 cm long, with a curved, thin, extension, beak-shaped, about 2,5 cm long, surmounted by the pappus, the modified calyx of the flower which has the function of helping their dispersion. 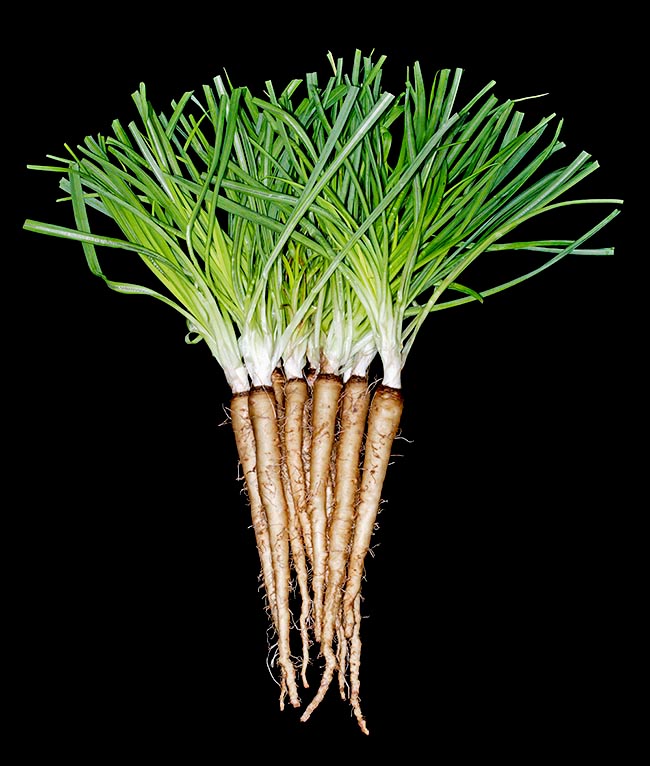 A bunch with the fleshy roots, edible as well as the young sprouts and the blooming buds. The root is rich of minerals, vitamins, in particular C, B1, B2, B5 and B6, fibers and sugars, like inulin and mannitol. Tasty and unusual food present also in the popular medicine due to its depurative and slightly laxative properties © Giuseppe Mazza

The pappus is formed by two series of about 2 cm long bristles, arranged as cup, or as a reversed umbrella, covered by tiny hairs. Once the fecundation of the flowers is completed, the involucre closes for protecting the fruits while the same are ripening, and will open again, forming a showy globe of 5-8 cm of diameter, when the achenes will be ready for being dispersed by the wind. It easily self-disseminates, so much to have naturalized, escaping from the cultivation, in many places where it has been introduced.

Plant known and utilized since remote times as aliment, in particular the fleshy roots, but also the young sprouts and the flower heads in bud, so much to have spread in all the continents, but its cultivation has become more and more marginal during the last decades. The root is rich in minerals, vitamins, in particular, C, B1, B2, B5 and B6, fibres and sugars, like the inulin and the mannitol; as well as food, it has been utilized in the popular medicine for its depurative and slightly laxative properties.

For the production of the roots, it is sown directly on the ground in spring in loose, draining soils, worked in depth with addition of organic substance, in full sun; the plant, at its first stages of development, requires humidity, and then it is quite resistant to the dry. By the first year, it will form a rosette of tender leaves, which may be utilized for salads; the root may be picked up 4-5 months after the germination and may be eaten raw or cooked, boiled or fried, with recipes varying depending on the location, after having been peeled and immersed in water acidulated with vinegar or lemon for avoiding its blackening. The taste, after some, recalls that of the nuts, after others, that one of the oysters, from which come some of the common names.

If the root is not collected, the plant blooms in the following spring-summer and the flower heads in bud may be eaten like the asparaguses; at this stage, the root is less tender and may be consumed, diced, only after cooking. It is not to be forgotten furthermore, that the plant, due to its blooming, has also its ornamental value, and for this reason, especially in the past, it has been utilized in the gardens of North Europe and of North America.

Tragopogon porrifolius was last modified: May 16th, 2019 by Giuseppe Mazza