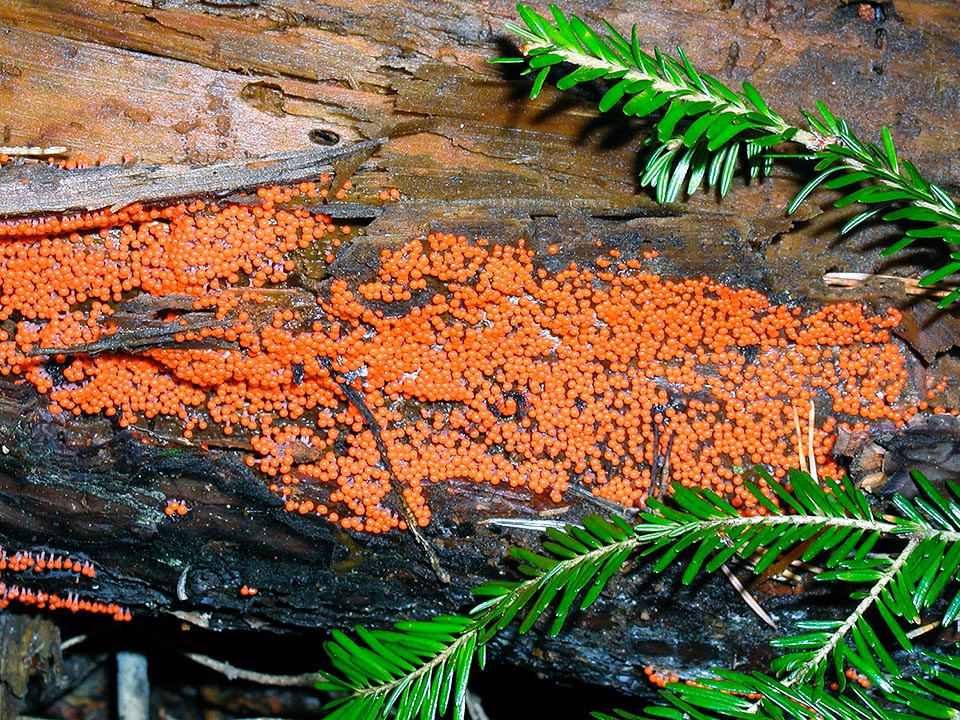 Frequent in the humid woods, on the rotting trunks of broad-leaved trees or of conifers, commonly known as Eggs of salmon, the Trichia decipiens is present in all the world adopting cleverly, after the cases, various strategies of survival with uninucleate (spores and other mobile cells) or plurinucleate (plasmodium) phases © Giuseppe Mazza

The Trichia decipiens (Pers.) T. Macbr. is an unusual mucilaginous organism belonging to the phylum of the Mycetozoa, to the class of the Myxomycetes, order Trichiales and to the family Trichiaceae.

The controversial group of the Mycetozoa, known commonly as slime molds, was once assigned to the kingdom Fungi due to their fructiferous bodies, similar to the real and true mushrooms that we are used to find in the woods and due to the fact that they reproduce through spores having a rigid cell wall.

Conversely, nowadays, seen the clear differences with the fungi, among which we can mention the type of nutrition (they phagocytize microscopic organisms in lieu of absorbing the nourishment from the environment) or the composition of the cell wall, never of chitin, present only in the spores, are classified standing to some authors in the kingdom Protozoa, inside the phylum Amoebozoa (the same to which belongs the known (Amoeba proteus) whilst for others is forming a separate phylum.

The name of the genus,Trichia, derives from the Greek substantive “θρίξ, τριχός” (thrix, trichós) = hair, bristle, with reference to the capillitium that uncovers the pyriform reproductive structures, whilst that of the species, decipiens, from the Latin verb “decipere” = to deceive, which misleads.

The Trichia decipiens, at times commonly called Eggs of salmon due to the resemblance the numerous fructiferous brown-orange bodies have with the eggs of this fish, is a cosmopolitan species living on the trunks humid or rotting of the trees, coniferous as well as broadleaved, where it finds its nourishment: bacteria, yeasts and organic particles.

Like all myxomicetes, the Trichia decipiens, displays a quite complex vital and reproductive cycle, where appear uninucleate phases (spores and other mobile cells) as well as plurinucleate (plasmodium). 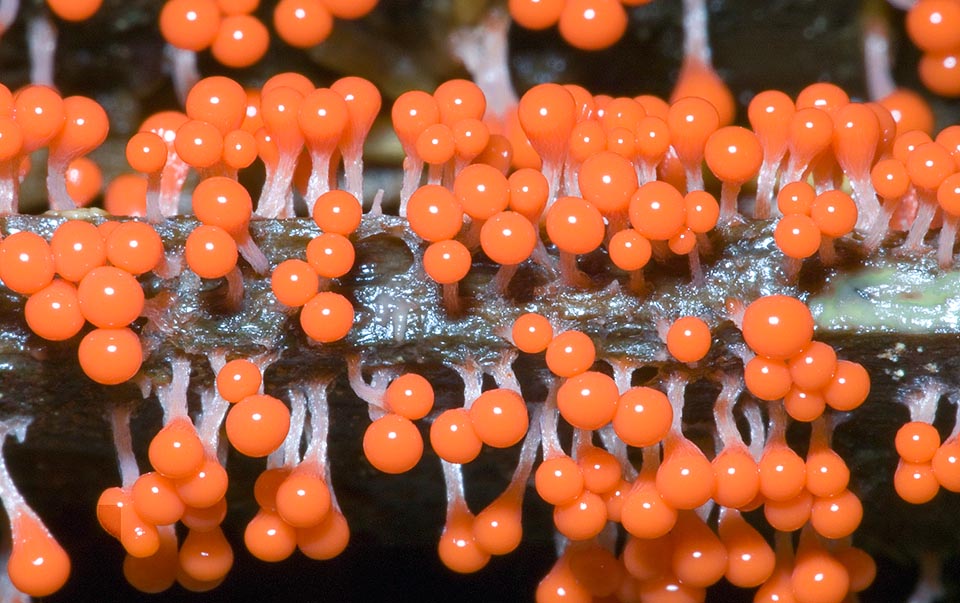 Close up of fallen branch, invaded by the mucilage, with reproducing bodies. After some authors Trichia decipiens is a unicellular relative to the amoebas, whilst for others it should be assigned to an independent new phylum. The fact remains that unlike the mushrooms this unusual form of life does not nourish sucking the lymph of trees or the rotting substances of litter, but phagocytizes yeasts, bacteria and organic particles, that incorporates directly into the cell through extroflexions of the cellular membrane © Giuseppe Mazza

During the milder seasons of the year, the Trichia decipiens, lives as cells with only one nucleus, feeding mainly on bacteria, yeasts and spores of other fungi it phagocytizes, engulfing them with extroflexions of the cellular membrane. These cells, always mobile, may assume two forms depending on the environmental conditions: when the humidity is so high to allow them to swim they display a flagellate form (called planocyte or myxoflagellate), whilst when it is low they assume an amoeboid, creeping form (myxamoeba). If the humidity changes, both forms can adapt transforming in the other but cannot survive long time a drought. In this case, they reduce the activity and render the surface more rigid and waterproof, that is, they encyst (reason for which they are called microcyst) until the environmental conditions come back to acceptable levels. In this way they can remain in this status for several months, even for one year!

Both the myxamoebas and the myxoflagellate can reproduce in an asexual way through cell division, but, also in this way they are obliged to clone without the advantages of a genetic variability, they prefer to do it, in order to reproduce more quickly, when the environmental conditions are favourable and constant.

When the environment, usually in autumn, becomes more hostile, with lower temperatures and humidity, and hence with less food available, the myxamoebas diffuse chemical call signals to meet individuals of different type, with other genetic heritages and fecundate each other thus forming an amoebozygote.

The amoebozygote begins to divide many times the cellular nucleus but contrary to what was happening before, it increases the shape of the cellular body by dividing it. It generates in this way the second phase of the cycle, plurinucleate, called plasmodium. To the plasmodium can add other amaebozygotes or other plasmodia and so at the end, by means of these additions and of the division of the nuclei, each plasmodium may contain hundreds of nuclei. Unlike what happens for the animals and the plants the fecundated cell does not grow thus creating new cells but it swells simply increasing the number of the nuclei. 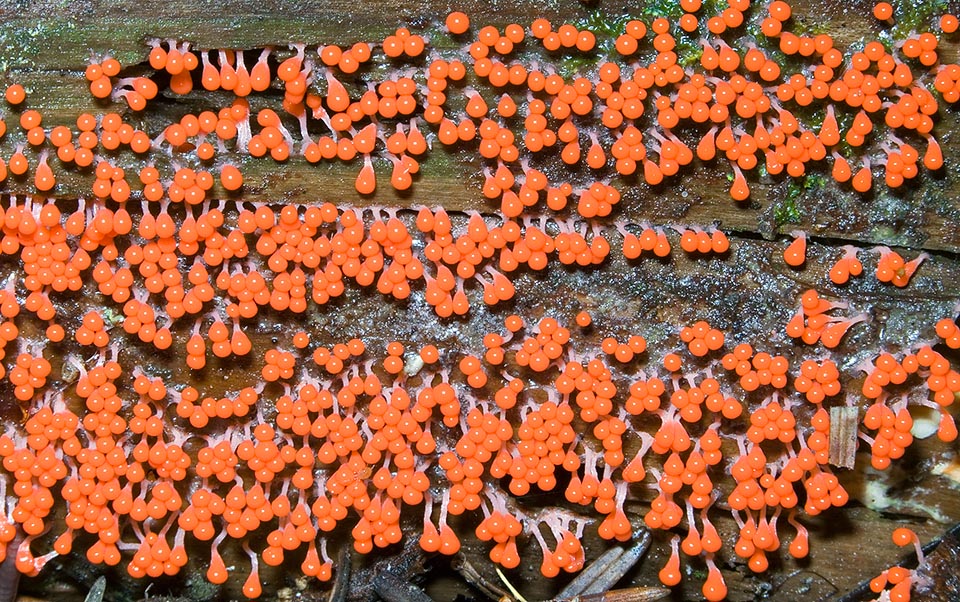 Cells that swim, cells that crawl, cells that can sleep one year encysted. If the conditions are favourable, the Trichia decipiens may reproduce extremely quickly, cloning dramatically by scission, but loses the possible advantages of a sexual reproduction that could create individuals more apt to the environmental changes © Giuseppe Mazza

The plasmodium of the Trichia decipiens, of variable colour, white, pink or orange, has a gelatinous consistency and advances, with an amaeboidal movement, on the rotting wood hunting not only the usual bacteria or yeasts, but also, seen the bigger size, moulds and fungi. If we are experiencing a period of drought, the plasmodium may also encyst drying and hardening to form a sclerotium, shape in which can remain till the return of the favourable conditions. However, in order to avoid at the maximum the dehydration, the plasmodium tries to remain in the shade or in the dark, where higher is the humidity.

When it is ripe and the frosts are getting close, the plasmodium stops to transform in a surprising way. From the gelatinous and shapeless mass of the Trichia decipiens, begin to appear, in groups at times very numerous, warty protrusions, initially of the same colour as the plasmodium, that will become the fructiferous bodies (called sporocarps or sporophores, that is, the structures where will develop and will be stored the spores). As soon as the sporocarps grow they get a structure called pyriform, seen that they have a globose structure or almost (sporangium or sporocyst) at the apex, of 1-1,5 mm of diametre and usually a stem long up to 1,5 mm that unites it to what remains of the plasmodium attached to the substratum (hypothallus).

This stem is initially white-translucent, with inside some granular structures well visible, whilst the sporangium is of variable colour, brownish to glossy orange. The sporangium has a membranaceous yellowish-translucent external layer, the peridium, that while getting old becomes brown-yellowish, bearing inside a great quantity of nuclei.

Of these last some will be circulated before by a membrane and then by a cellular wall with a surface slightly cross-link,thus becoming spores; whilst others will form a twine of tubular fibres not ramified (capillitium), of 4,5-5,5 µm of diameter in the median part but pointed towards the extreme and up to 150 µm of length. The nuclei that have formed the capillitium die and the interior of the fibres dries, getting a yellowish-olivaceous colour. 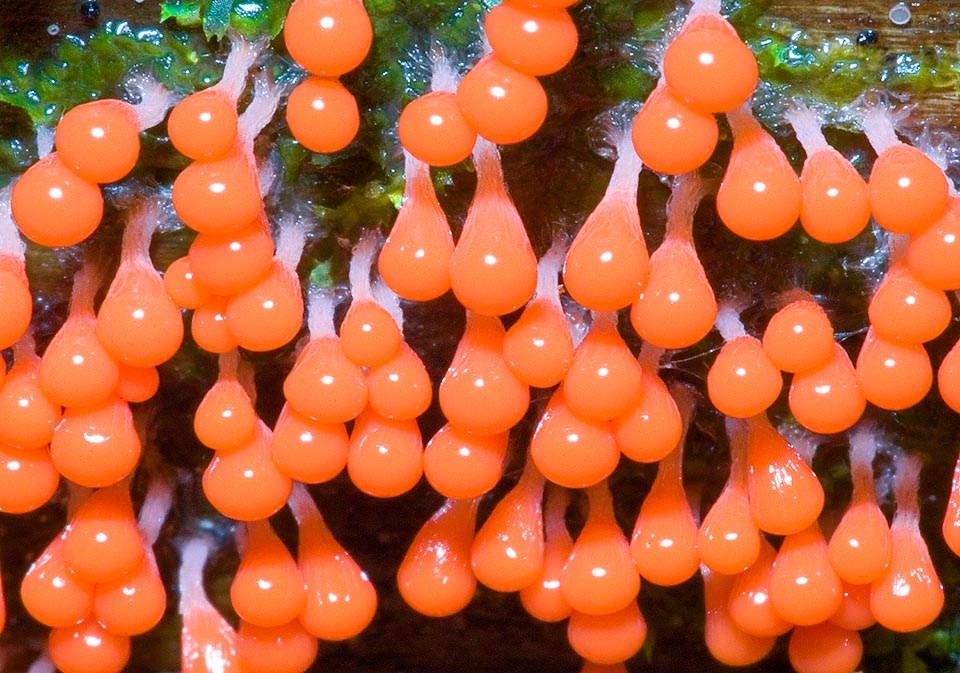 Hence when winter is approaching the Trichia decipiens changes strategy and decides to get married. It sends chemical recall signals to meet individuals of different type, with other genetic heritages to unite and form an amaebozygote.The cell that before divides now grows incorporating numerous nuclei that will form the spores inside of these showy pyriform structures that when drying, in winter, become brown. With the spring rains they swell and uncovered from inside free the spores © Giuseppe Mazza

The Trichia decipiens remains so, suspended, during the winter, and when the conditions become again favourable, the humidity given by the spring rains make that the capillitium, till then dry, increases of size, pricking the peridium, in whose apex opens a roundish hole through which get out the spores and, like a crown, the capillitium. Thus remains a cup-shaped structure formed by the stem and the open peridium.

The spores are transported by the wind or by small animals, usually invertebrates, and where they land, when conditions are favourable, will germinate under form of myxamoebas or myxoflagellates, depending on the humidity, thus closing the cycle.