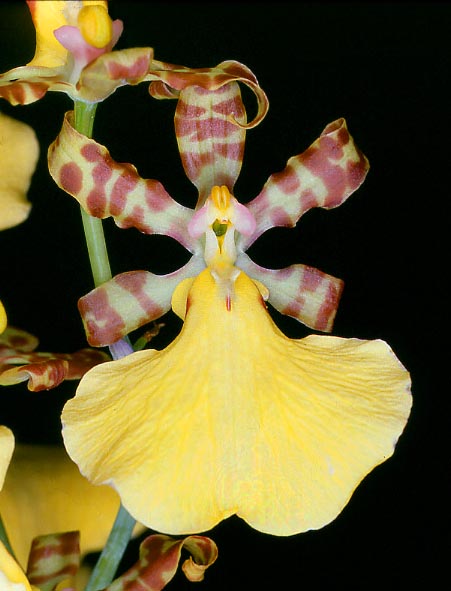 The species is native to Central America (Guatemala, Honduras and Nicaragua), where it grows, as epiphyte or as lithophyte in areas mainly exposed, at medium altitudes, characterized by humid climate in summer and dry in winter. The name of the genus is the combination of the Greek terms “thrix, thricós” = hair, and “kentron” = point, with reference to the thin and long spur present in some species belonging to the genus; the name of the species is the Latin adjective “splendidus, a, um” = splendid, magnificent.

The Trichocentrum splendidum (A.Rich. ex Duch.) M.W.Chase & N.H.Williams (2001) is an epiphytic or lithophytic species with short rhizomes from which originate globular pseudobulbs, laterally compressed, 4-5 cm long, with at the apex one only leaf of intense green colour with brown-reddish shades if the luminosity is too high.

The leaves are fleshy, rigid, oblong, 15-30 cm or more long and 3-5 cm broad, V-shaped; this species and those alike, due to the shape of the leaf, are commonly called as shaped like “mule ears”.

Ramified inflorescence on an erect, robust peduncle, up to about 60 cm long, from the base of the pseudobulb, carrying numerous flowers of 6-8 cm of diameter, long-lasting, about three weeks, with lemon yellow sepals and petals with wide brown spots and yellow labellum. Sepals and petals are oblong, about 3 cm long and 1 cm broad, with undulated edges and retroflexed apex, the labellum is trilobed, 4 cm long and 1,6-2 cm broad, with roundish central lone, almost flat, with undulated margins, and the column, 1 cm long, has at the extremity two semicircular fleshy wings. It reproduces by seed, in vitro, and by division with each section provided with at least of 3-4 pseudobulbs.

Species with a quite appropriate name, it requires, during the vegetative period, medium-high temperatures, high humidity, 70-80%, and luminosity, even direct sun, in case filtered during the central hours of the day in summer, it may stand a partially shaded position, but in this case, the flowering is affected; the cultivation location must be always well aerated. The waterings must be regular and abundant, but allowing to partially dry up before giving water again, until the complete ripening of the pseudobulbs by early winter, from this moment, the plant needs a cool and dry resting period, with much reduced waterings, without ever excessively wrinkling the pseudobulbs, minimum temperatures preferably not lower than 14 °C and humidity around the 50%.

The waterings are to be gradually increased by the vegetative re-growth, avoiding water stagnations on the emerging vegetation, particularly sensitive to rottenness. For the waterings and nebulisations is to be utilized rainwater or water obtained by reverse osmosis or demineralised; the fertilizations, duly distributed and alternated, in way to avoid salts accumulation at the roots, are to be done during the vegetative period preferably with hydro-soluble balanced products, with microelements, at ¼ of the dosage suggested on the package.

It can be mounted on bark, raft of cork or of arborescent ferns roots, even if this is not always easy seen the dimensions of the plant, or finally cultivated in limited size pots with a much draining and aerated compost, which may be formed by rubble and leaf mould or by medium sliced bark fragments and charcoal, possibly with a superficial layer of sphagnum for a greater humidity at the base of the pseudobulbs.