The species is native to the Philippines (Luzon) where it grows on the trees of the humid forests or on calcareous rocks.

The name of the genus is the combination of the Greek substantives “θρίξ” (thrix) = hair and “γλῶττα” (glotta) = tongue, with reference to the down present on the labellum; the species is honoured to the French grower R. Guibert.

The Trichoglottis guibertii (Linden & Rchb.f.) Rchb.f. (1872) is an epiphytic or lithophytic monopodial species with cylindrical stems enclosed by the imbricate foliar bases and from where depart robust aerial roots. The leaves are nastriform with irregularly bilobed apex, alternate, distichous, coriaceous, of dark green colour. Panicle axillar inflorescences, erect or drooping, bearing numerous fleshy flowers, of 4-5 cm of diameter, of cream white colour with red anelliform spots, slightly odourous. Obovate to spatulate sepals and petals with obtuse apex, trilobed labellum with short spur at the base, lateral lobes erect on the sides of the column and pandurate median lobe with obtuse apex, tomentose.

It reproduces by seed, in vitro, and through the young plants that are produced, numerous, at the base. 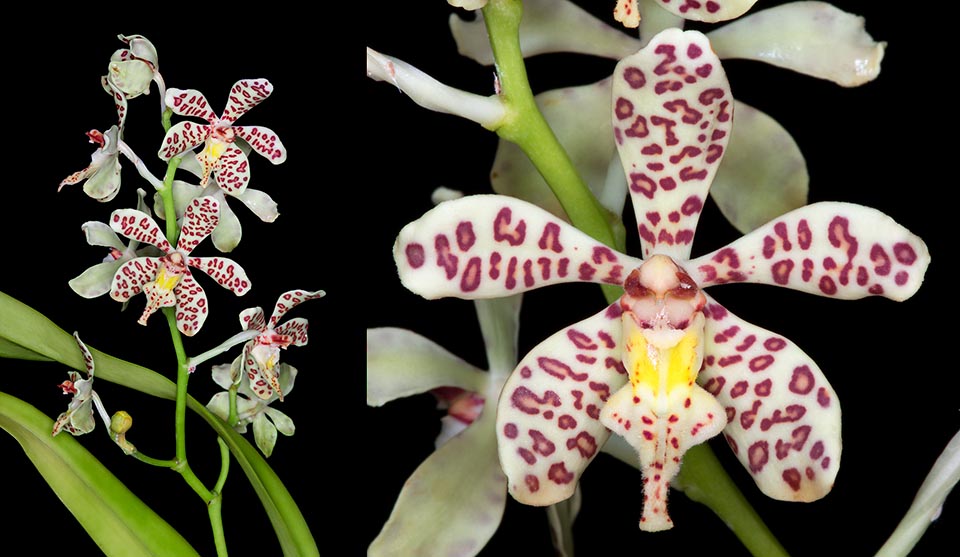 Species rare in cultivation in spite of the undoubtful ornamental characteristics of its long lasting flowers, 30-40 days, requires a slightly shady exposition, medium-high temperatures in summer, 24-32 °C, a little cooler in winter with lowest night values not under the 15 °C, high humidity, 70-85%, and constantly moving air. The waterings must be regular and abundant during the growth, more spaced during the vegetative stasis, but without ever allowing the substratum to dry up completely, utilizing rain water, demineralized or by reverse osmosis. For the fertilizations, every two weeks during the growth period, can be utilized a hydrosoluble balanced product, with microelements, at ¼ the dosage suggested on the package. It can be mounted on trunks, bark, rafts of cork or of arborescent ferns, or cultivated in pot with a perfectly draining and aerated compost that can be formed by medium sliced bark and charcoal fragments with addition of inerts, like chippings or expanded polystyrene balls.