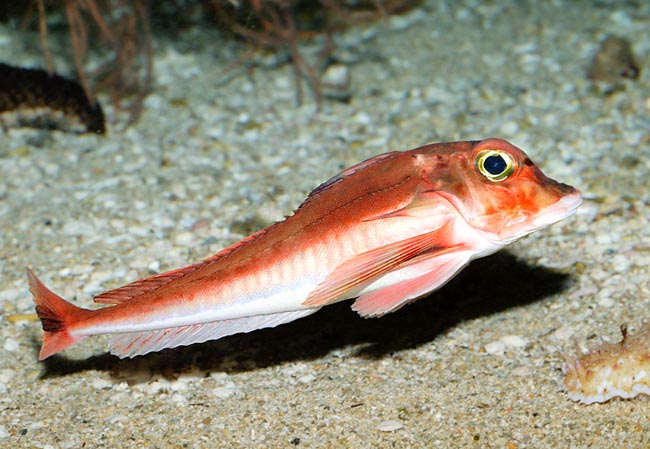 The Piper gurnard (Trigla lyra Linnaeus, 1758) belongs to the class of Actinopterygii, the ray-finned fishes, to the order of Scorpaeniformes and to the family of Triglidae.

It is present in all the Mediterranean, Black Sea included. After Gibraltar Strait, it goes northwards along the eastern Atlantic coast up to UK, and, southwards, reaches Namibia, after having colonized the Azores, Canary, Madeira and Cape Verde Islands.

It reaches the 60 cm, but the animals caught measure little more than the half. The armoured head and the fore part are very big in comparison to the body, with almost circular section, tapering rapidly towards the tail. The head shows a curved bone ahead, ending below with two typical indented lobes, well visible from above, whilst on the side it’s a blooming of big, sharp spines. 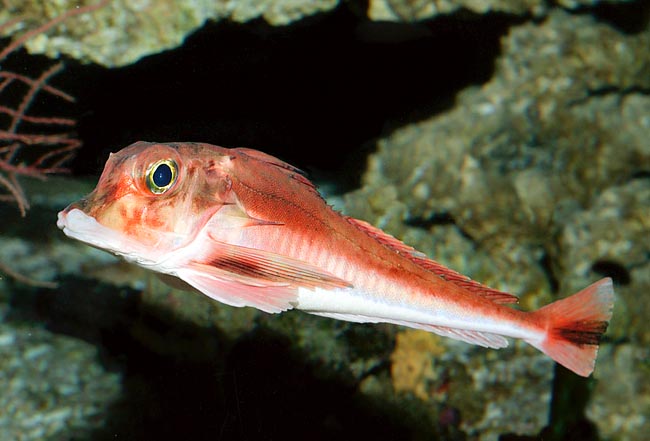 The head is big with long acuminate spines. Flesh is prized © Giuseppe Mazza

The head, placed below, is armed on the jaws and on the vomer by obtuse teeth, meant especially for grinding the crustaceans which are the main dish of the species.

The dorsal fins are two, and can be inserted in a groove, protected on both sides by 24-25 cutting and acuminate spines looking towards the tail. The first dorsal fin is formed by 9 spiny rays, the second one, adjacent and lower, by 15-17 soft rays. The anal fin, specular to the second dorsal, counts 16-17 rays and the caudal is spatulate, slightly concave. The ventral fins, well developed, have one spine and 5 unarmed rays, and the pectoral ones, even bigger, extend up to the first rays of the second dorsal, ending below with the three separate, thickened and difgitiform rays typical of the Triglidae. Three “legs” per side, which allow the fish not only to move on the bottom, but to have also, especially in the darkness, important sensory functions.

The colour is dark red on the back, pink on the sides and white on the belly. The fins are red, but sometimes, even if much less than the Trigloporus lastoviza the dorsal and the pectoral ones have some light blue spots.

The piper gurnard, as mentioned before, bases its diet on the crustaceans, especially the swimming ones, such as schools of shrimps, but also those moving on the bottom, like crabs and hermit crabs. Also, it loves the echinoderms, particularly the Ophiuroidea, the so-called brittle stars, the worms and the small fishes living on the rocks and among the corals.

It reaches the sexual maturity by around the 30 cm and it reproduces in summer with small pelagic eggs. The larval stages do already have some bony excrescences and some spines. The lifespan of a piper gurnard is of 7 years and the reproduction rate is good, but, due to its prized flesh, it is endangered by the industrial fishing, too much intensive, with trawl nets. The vulnerability index of this species is of 63 over 100.