Amply cultivated since the remote times and naturalized in various tropical and subtropical countries, its exact place of origin is not known, it is supposed to be the South-East Asia. 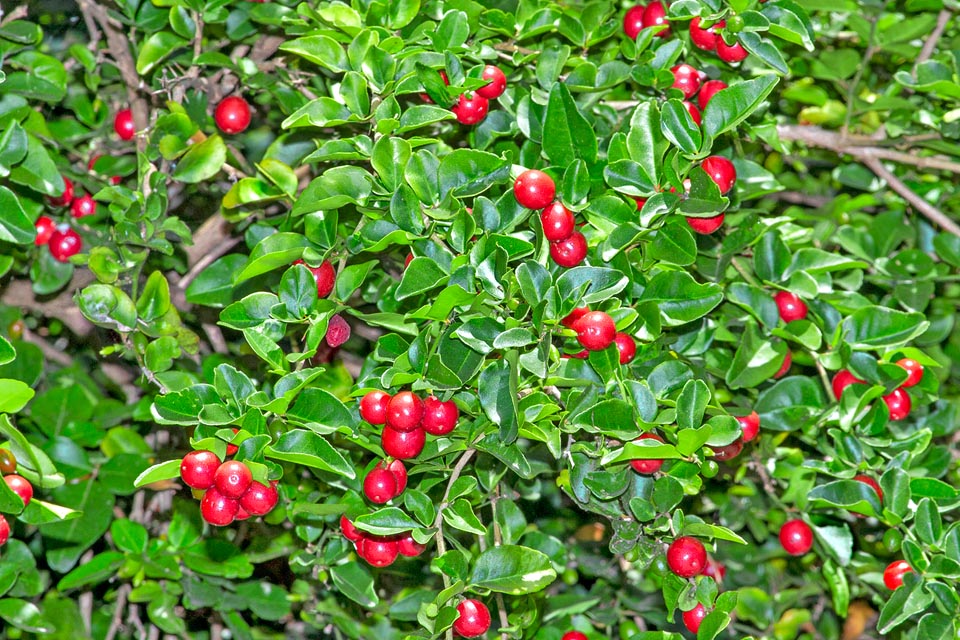 Native, it is supposed, in south-eastern Asia, the Triphasia trifolia is a very ramified evergreen shrub, up to about 3 m tall, with 3-16 mm spines at the axil of the leaves © Giuseppe Mazza

The Triphasia trifolia (Burm.f.) P.Wilson (1909) is an erect evergreen shrub, very ramified, up to about 3 m tall, with branches provided at the axil of the leaves of couples of thin, straight, 3-16 mm long, thorns.

Alternate leaves, on a not winged short petiole, formed by three ovate-elliptic leaflets with emarginate apex, cuneate base and irregularly crenate margin, of glossy dark green colour, coriaceous, aromatic , the two lateral ones being smaller, 1-2,5 cm long and 0,6-1,8 cm broad, the terminal 2-4,7 cm long and 1,3-2,5 cm broad. Flowers, on a 3-5 mm long peduncle, solitary or in groups of 2-3, hermaphrodite, green calyx, about 2 mm long, with 3 triangular lobes, corolla with 3 free oblong petals with rounded retroflexed apex, white, 1-1,3 cm long and 0,4-0,5 cm broad, 6 stamens, trilocular ovary, with one ovule per cell, and style with trilobate stigma; the flowers emit a scent similar to that of the orange flowers.

The fruit is a berry (hesperidium), ovoid, apiculate, 1,2-1,5 cm long, initially of green colour, then from orange red to dark red when ripe, with the thin husk (epicarp) dotted of tiny oleiferous glands. 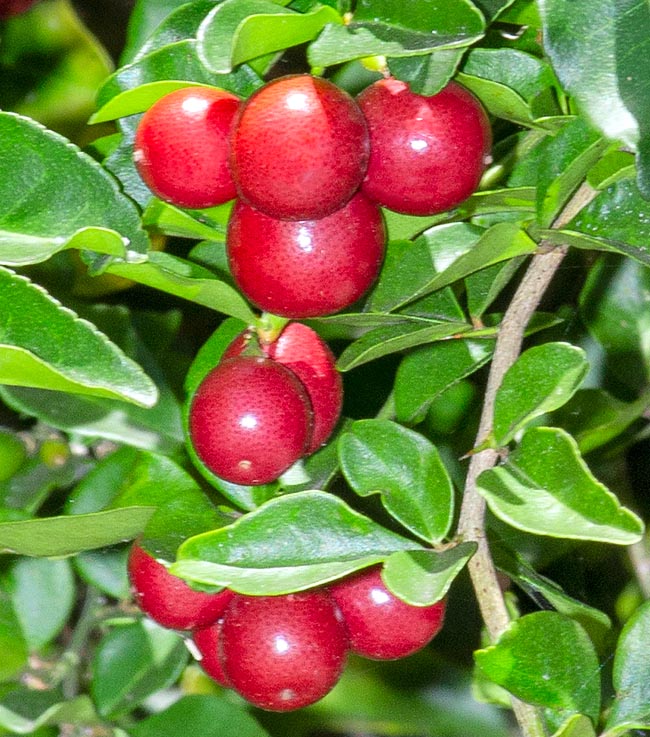 The showy 1,2-1,5 cm edible fruit, contains 1-3 oblong flattened, 1-3 mm long, seeds, immersed in a rather mucilaginous pulp, with a pleasantly sweet taste when ripe, that recalls that of the key lime © Giuseppe Mazza

The fruit, edible, contains 1-3 oblong, flattened, 1-3 mm long, seeds, immersed in a rather mucilaginous pulp, with a pleasantly sweet taste, when perfectly ripe, that reminds that of the kay lime, Citrus aurantiifolia (Christm.) Swingle, 1913.

The seeds are easily dispersed by the animals, in particular birds, who feed of its fruits.

It reproduces by seed, planted in the shortest possible time, as not having a long lasting germinability, in perfectly draining and aerated sandy loam, maintained humid at the temperature of 24-26 °C, with germination times of 3-4 weeks; it propagates also by cutting and by air layering.

Species with remarkable adaptability to various types of soil, acidic to alkaline, semi-arid to humid, provided perfectly draining, as not standing water stagnations, and to exposition, as it can live equally in rocky areas in full sun as well as in the under-wood of the humid forests.

Due to its compact foliage, the perfumed, almost continuous, flowering and the red edible fruits, it has been introduced in several tropical and subtropical countries, where is utilized mainly for borders, formal as well as informal, and fences, even defensive due to the presence of the spines.

Its cultivation on the milder temperate-warm regions may be tried, where it can stand temperatures little under the 0 °C for a short period, but with not excessively humid winters.

In some zones it has escaped cultivation, naturalizing and becoming in some cases highly invasive, thanks to its versatility, forming impenetrable thicket that chokes the pre-existing vegetation.

Because of its rather slow growth it well adapts to the cultivation in pot and is also a very appreciated subject for bonsai.

The fruit may be consumed raw, candied, pickled or utilized for preparing drinks, gelatins, and jams. Leaves and fruits are utilized in the traditional medicine of South-East Asia; laboratory studies have evidenced in the essential oils extracted from the aerial parts of the plant a high antioxidant power.

→ To appreciate the biodiversity within RUTACEAE family please click here.