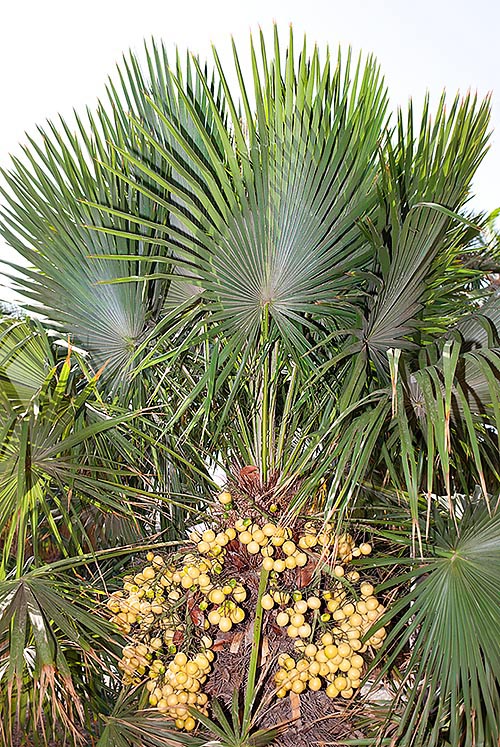 Even if cold resistant,Trithrinax brasiliensis is little cultivated © Giuseppe Mazza

The species is native to Brazil (state of Rio Grande do Sul and, in a much limited way, in those of Paraná and Santa Catarina) and to Uruguay, where it lives along the water streams as well as in semi-arid open areas, at altitudes of more than 500 m, usually in isolated populations formed by few individuals.

The name of the genus comes from the Greek “tris” = thrice and “thrinax” = tricuspid pitchfork, with reference to the shape of the calyx, corolla and androecium, as well as to the triple number of carpels vis-à-vis the Thrinax, monocarpellary genus of American palms; the Latin name of the species “brasiliensis” = of Brazil, refers to one of its zones of origin.

The Trithrinax brasiliensis Mart. (1837) is a species with usually single stem, rarely caespitose, of rather slow growth, with stems which may reach the 15 m of height, even if in cultivation they keep lower, with a diameter of 12-30 cm, covered by a thick tangle of fibres, remnant of the foliar bases persisting for long time, which have, in the terminal part, the consistency of real and proper thorns, 10-18 cm long, facing both upwards and downwards.

The leaves, on unarmed, 60-90 cm long, petioles partially covered by a whitish tomentum, are palmate, 1-1,5 m broad and 0,8-1 m long in the median part, from the base of the petiole to the apex, of intense green colour on the upper page, green grey and covered by a light layer of wax and by a whitish tomentum below, divided for about the half of their length in rigid segments in the young leaves, usually hanging in the old ones, bifid at the apex and pointed like thorns.

Inflorescences among the leaves on a short peduncle, 60-70 cm long, curved, much ramified, with bracts initially whitish, carrying hermaphrodite flowers of cream white colour with six stamina and three free carpels (modified leaves producing and containing the ovules), the structure of the flower, common to the species of the genus, it is considered as standing among the most primitive of the palms family. The fruits are drupes from globose to ellipsoid, up to about 2,6 cm long and 2,2 cm of diameter, of yellowish colour, containing only one globose seed of about 1,4 cm of diameter.

It reproduces by seed with rather variable germinating times, fresh seeds may germinate in 1-5 months, but they may take even longer times, up to more than one year. 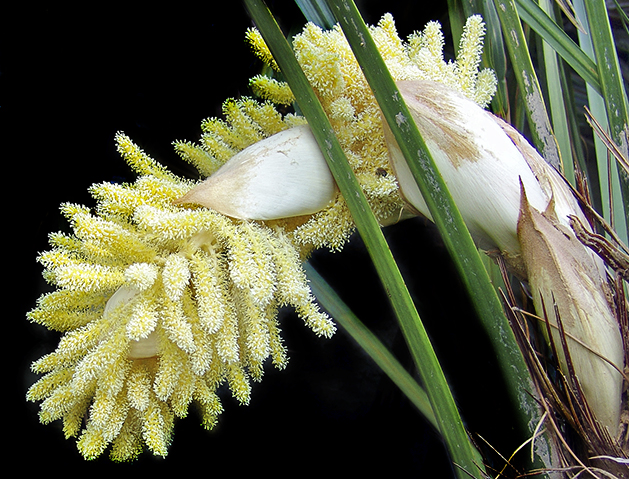 Relatively little cultivated species, but of remarkable ornamental value due to the typical tangle of fibres covering the stem and the much decorative inflorescences and infructescences, it can be cultivated in the tropical, subtropical and temperate climate zones, where it can resist, when adult, to temperatures as low as -7 °C for a short period, even some degree less if the climate is dry. When placing it in locations open to the public, we have to keep in mind its potential dangerousness coming from the fibres and the extremities of the foliar segments reduced to thorns, avoiding passage and stationing zones, especially of kids.

It requires an exposition in full sun and is not particular about the soil, provided the same is well draining, even poor, stony and calcareous, when adult, it can bear long drought periods, but takes advantage from regular waterings in the zones characterized by long warm and dry summers; it does not like excessively humid climates, which, in connection with low temperatures, may encourage fungi attacks.

More and more rare in the wild, it is now inserted into the list of the endangered specs of the Brazilian state of Rio Grande do Sul. The leaves are locally utilized for making hats and other handicrafts.