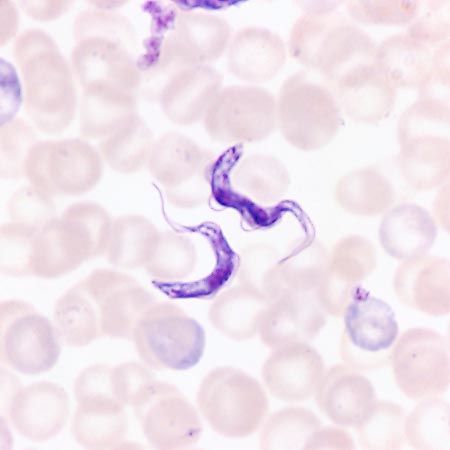 The trypanosomes are extracellular parasite protozoa which can infect the blood of vertebrates and have vital phases in the alimentary duct and its adnexa, of hematophagous invertebrates (ticks, hematophagous mosquito, bed bugs, flies of the genus glossina, lice, fleas, etc).

These parasites cause, in many species, a series of pathologies which are usually classified as trypanosomiasis.

The word of the genus Trypanosoma comes form the ancient Greek trypaô: to perforate and soma: body.

Many species of the genus Trypanosoma do exist, most of them cause the trypanosomiasis, only few of them are not pathogenic, like the species Trypanosoma lewisi, that is specific for rodents like rats and mice.

As said before, trypanosomes live in the blood of the vertebrates and utilizing host insects or arthropods hematophagous as vectors; but in some instances the vectors can belong to the class of the Hirudinea (leeches), usually utilized by non-pathogenic forms.

But, in fact, few exceptions, all others are pathogenic for mammals (man included), birds, reptilians, amphibians and fishes.

However, all trypanosomes utilize besides the vector host (the hematophagous insect), also a primary host (as called in Biology), which is rightly represented by a member of the five classes of vertebrates (mammals, birds, reptilians, amphibians, fish), where the sickness manifests.

Depending on the location of the host, it will have a different habitat of life and a vital stage corresponding to a different functional biologic form.

As a matter of fact, it has been possible to classify the different forms of life in relation to the host and the colonized habitat.

This classification is indispensable for the biologist parasitologist when he has to determine if a certain pathologic condition is caused by a species of trypanosome, as it might be understood from the symptoms present in the animal or the man.

Under the form of Trypomastigote, the trypanosoma parasitizes the vertebrates carrying on an extracellular life in the blood, in the forms of Leptomonas, Crithidia, Metatrypanosoma it will infect the digestive apparatus of the vector insect. A typical morphology, therefore a biology too, will correspond to each of these forms, which the parasitologist will be able to identify.

In the case of the trypanosomes, at times the form Leptomonas assumed by the trypanosome, can be mistaken with the form of another pathogenic protozoa, the Leishmania (which causes the leishmaniasis in the mammals), therefore their identification is not so simple.

Morphologically, however, the trypanosomes are flagellates, with a fusiform, thin body, provided with a nucleus and with Blepharoplasts or Cinetonuclei or Kinetosomes (they are units of centrioles, organelles or called also organits, which act as motors for propelling the flagellum guaranteeing its typical undulated and whip lash-like movement, which the trypanosome utilizes for moving in the biologic fluids of the parasitized vertebrate, such as the blood and the cerebrospinal fluid) from which a flagellum departs (but they can be even two up to three, depending on the species) which while leaning on the body forms an undulating membrane. The front extremity is free.

Inside its cytoplasm are basal granules, containing spare nourishing substances and a Kinetoplast, such structure is of mitochondrial nature and represents the power station of the protozoa and the flagellum, and through complicate reactions and bio-chemical chains, will provide, under form of an organic molecule, Adenosine-triphosphate (ATP), the energy needed for the contraction of the flagellum/flagella, allowing the parasite to move in an autonomous manner.

Usually, the trypanosomes are endemic in Equatorial Africa, ex-Rhodesia (presently the state of Zimbabwe) and nearby territories, tropical Africa, Asia (neighbouring islands enclosed), South America, Central America, India, China, Mediterranean countries, Iran, Iraq, but some species are world-wide, present also in Europe, such as the Trypanosoma lewisi, parasite of rats and mice, and the Trypanosoma rotatorium, parasite of frogs. 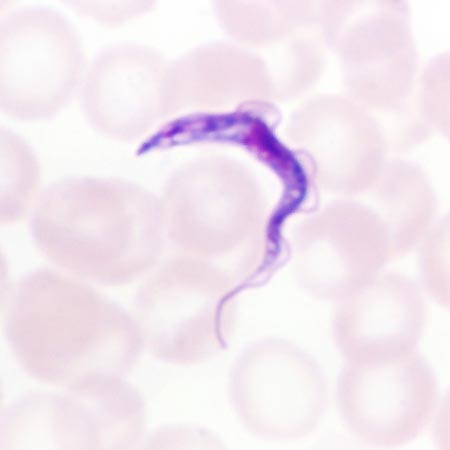 These last are both non pathogenic species.

In the Trypanosoma lewisi, the vector host is formed by different genera of fleas, whilst in the Trypanosoma rotatorium, it’s a member of the class of the Hirudinea (for instance Haemopis sanguisuga, common in the ditches and ponds in Asia, or the Hirudo medicinalis, endemic in Europe, and imported also in USA), but they are not hematophagous insects.

In the case of the Hirudinea as vectors, the Trypanosoma is transmitted in the infesting form of Metatrypanosome while it is sucking blood from a possible fish, turtle or frog.

Whilst the insect or hemaphotagous arthropod can transmit the infesting form Metatrypanosoma through bite and suction of blood, or through the faeces emitted.

Apropos of this, let us see the Biologic cycle characterizing the Trypanosoma gambiense.

First of all, the primary host is the man, the trypanosomiasis it induces is the sleeping sickness, for which the infected person falls into a deep sleep, from which, unluckily, cannot wake up, and so, if without a medical intervention for getting proper cures, besides being artificially nourished and hydrated, the person would die for starvation.

This kind of death is not so unusual, as the Trypanosoma gambiense is endemic to equatorial Africa, where in the back country do not exist adequate medical structures (ambulatory care sites, hospitals), and where, often, are no physicians, not to talk about the incapacity of the villagers to recognize serious situations, like the one induced by this infection.

In this fly, it lives in the epithelial cells of the digestive apparatus; in the human being, who is the primary host, its life is extracellular or develops in the blood or in the cerebrospinal fluid.

The Trypanosoma gambiense can be released in the habitat, through the faeces of these flies, for instance in puddles of dirty water where both kids and adults bathe or play. But, at times, it is sufficient that it lands on a person’s face.

Even if it does not have enough time for biting, because driven off, it can leave there its excrements, which, touched unintentionally with the hands, can then reach the mouth.

In all these cases, the parasite will be ingested through the oral mucosa and then will go into the blood through the circulation.

From here it will rapidly develop, by binary unequal scission or by multiple scission where the kinetoplast and the cellular nucleus split several times before the cytoplasm separates.

The Tsetse flies (Glossina palpalis), can get infected themselves when sucking the blood of infected humans, where the Trypanosoma gambiense is present.

In this case the parasites enter the epithelial cells of the insect stomach, corresponding to the small intestine in the fly, where they become pear-shaped, increase, undergo a multiple scission from which originate from 8 to 10 mobile individuals.

Some of them, after the breakage of the containing cell, can either go back to the stomach (that is equivalent to small intestine in the fly) and repeat the cycle, or assume the form of Crithidia and migrate into the rectum where they adhere to the walls through the flagellum, multiply by binary scission and transform into Metatrypanosoma, where, through the faeces, they are expelled into the habitat and the cycle starts again.

Eventually, when the Tsetse fly infects, by biting a non-infected primary host (man) for sucking the blood, it transmits the Trypanosoma gambiense, under form of Metatrypanosome.

We have seen that there is either the possibility (the most frequent and associated with forms of trypanosomiasis) of transmission, utilizing as vector an insect or hematophagous insect, or (cases when the trypanosome can even be not pathogenic), when the vector host belongs to the class of the Hirudinea.

In Biology, conceptually, the word infection or infestation (the latter by metazoan parasites) can be used both for a pathogen (correct definition) or not, which performs its life cycle in the host, although it would be more correct in the second case to speak of mutualistic symbiosis or not, depending on the case, or rather of infecting or infesting organism.

Actually, there is a third and unique case of pathogenic Trypanosome, not transmitted through the aforementioned types of hematophagous invertebrate vectors, but from the infected to a healthy individual, through the sexual intercourse, that is the Trypanosoma equiperdum.

It happens in the equines (horses and asses, but also zebras), where the transmission is direct, during the coitus, transmitted through the semen of the male or by contact with the vaginal exudates, or of the penis itself, depending if the individual infected is male or female.

This Trypanosoma causes a sickness called Dourine, which reveals with the presence of temporary skin plaques, after six weeks (inflammatory allergic reaction), causing miscarriage to pregnant female and compromising of the central nervous system (SNC), with motor paralysis causing the death of the animal, both male and female which has contracted it.

Its evolution goes from 2 to 3 months up to one year from the contraction, it is practically world-wide.

Here is a short listing of the various species of Trypanosomes which are, or not, cause of trypanosomiasis.

Diffusion area: ex-Rhodesia (presently the state of Zimbabwe) and nearby territories.

Habitat: blood, exudates (semen among them).

Habitat: blood and cells of different types of tissues.

Sickness: chagas disease, having acute and chronic clinical forms (in the acute forms, there is anaemia, fever and hepatosplenomegaly with clear enlargement and relevant malfunction of liver and spleen.

Diffusion area: Central and Southern America, and for this reason is also called Trypanosomiasis of the Americas.

Sickness: none; not pathogenic.

Sickness: none; not pathogenic.

Trypanosoma gambiense was last modified: May 18th, 2018 by Giuseppe Mazza